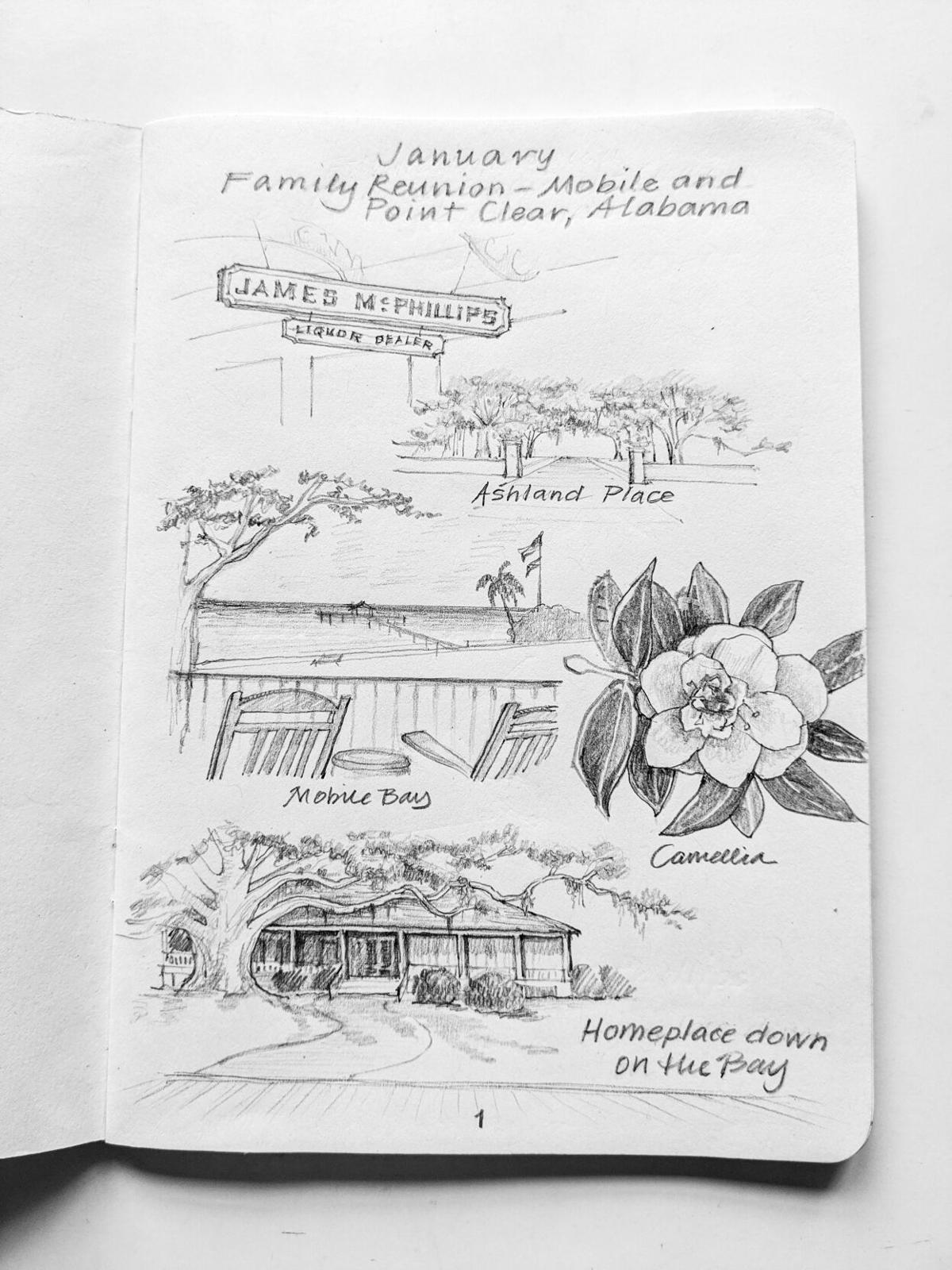 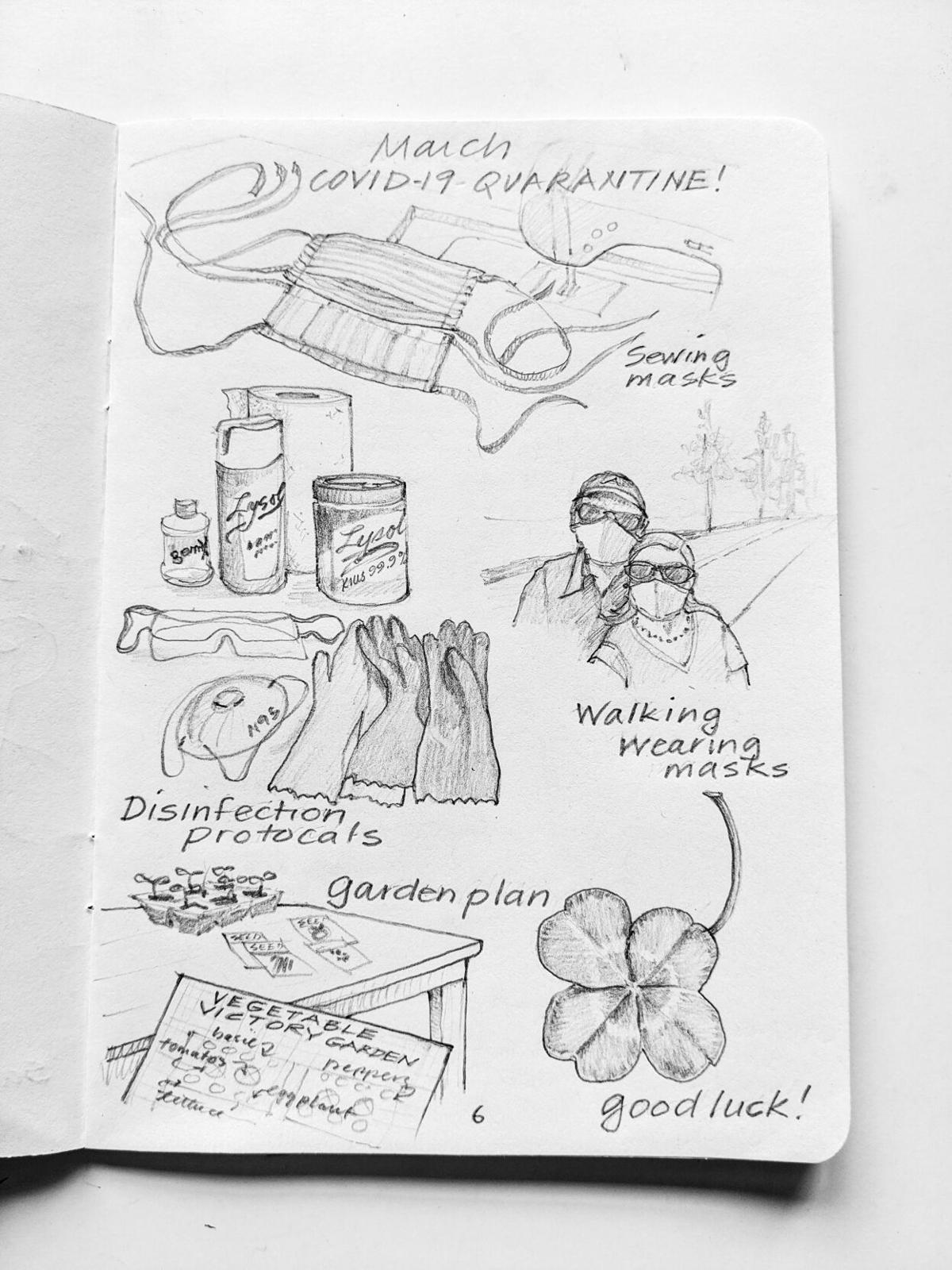 The second page for March has masks, rubber gloves, safety glasses – and a shamrock for good luck. 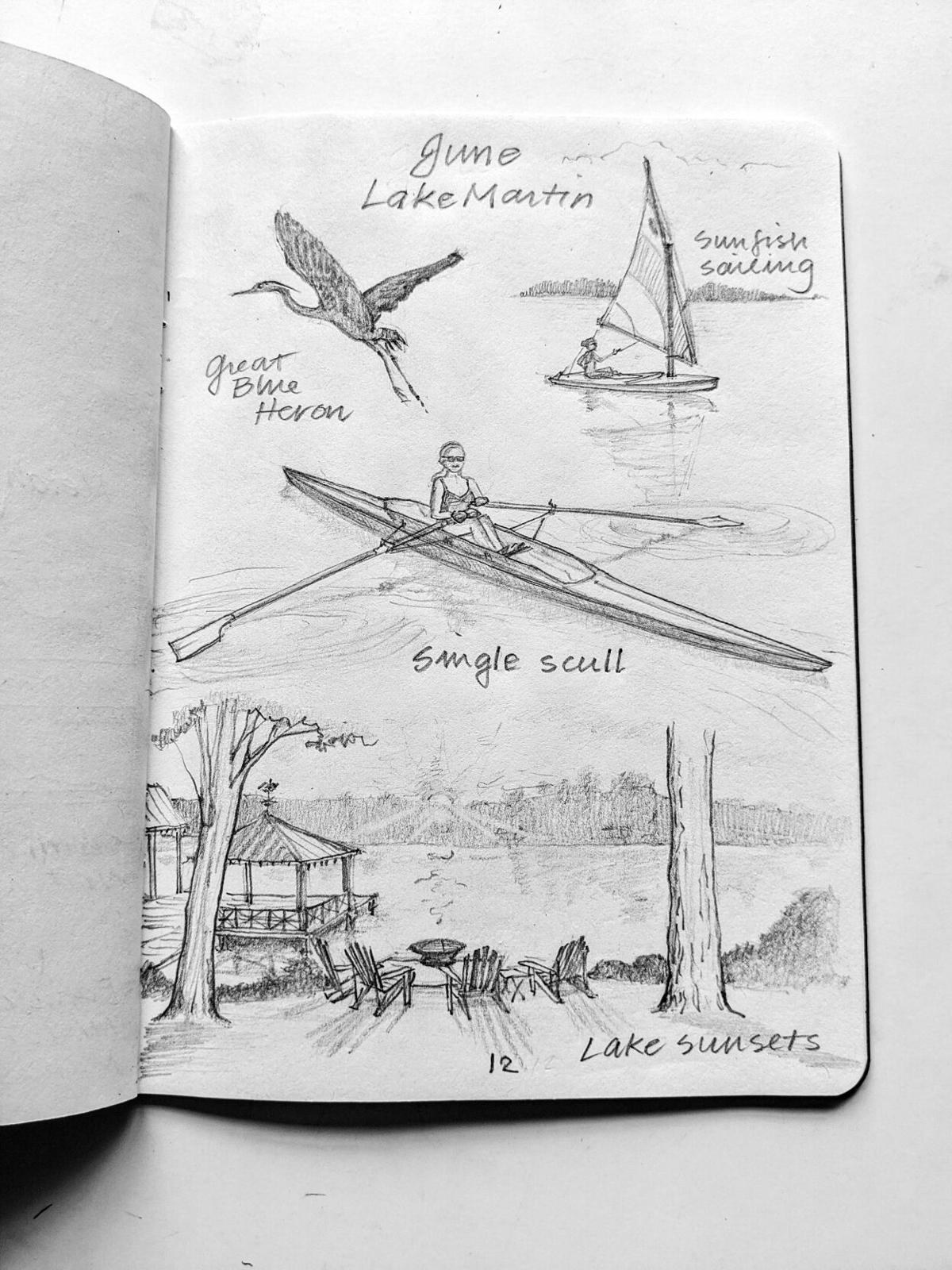 In June, McPhillips’ drawings in the sketchbook recalled their times at the lake: sunset viewing, sculling, sailing and birdwatching. 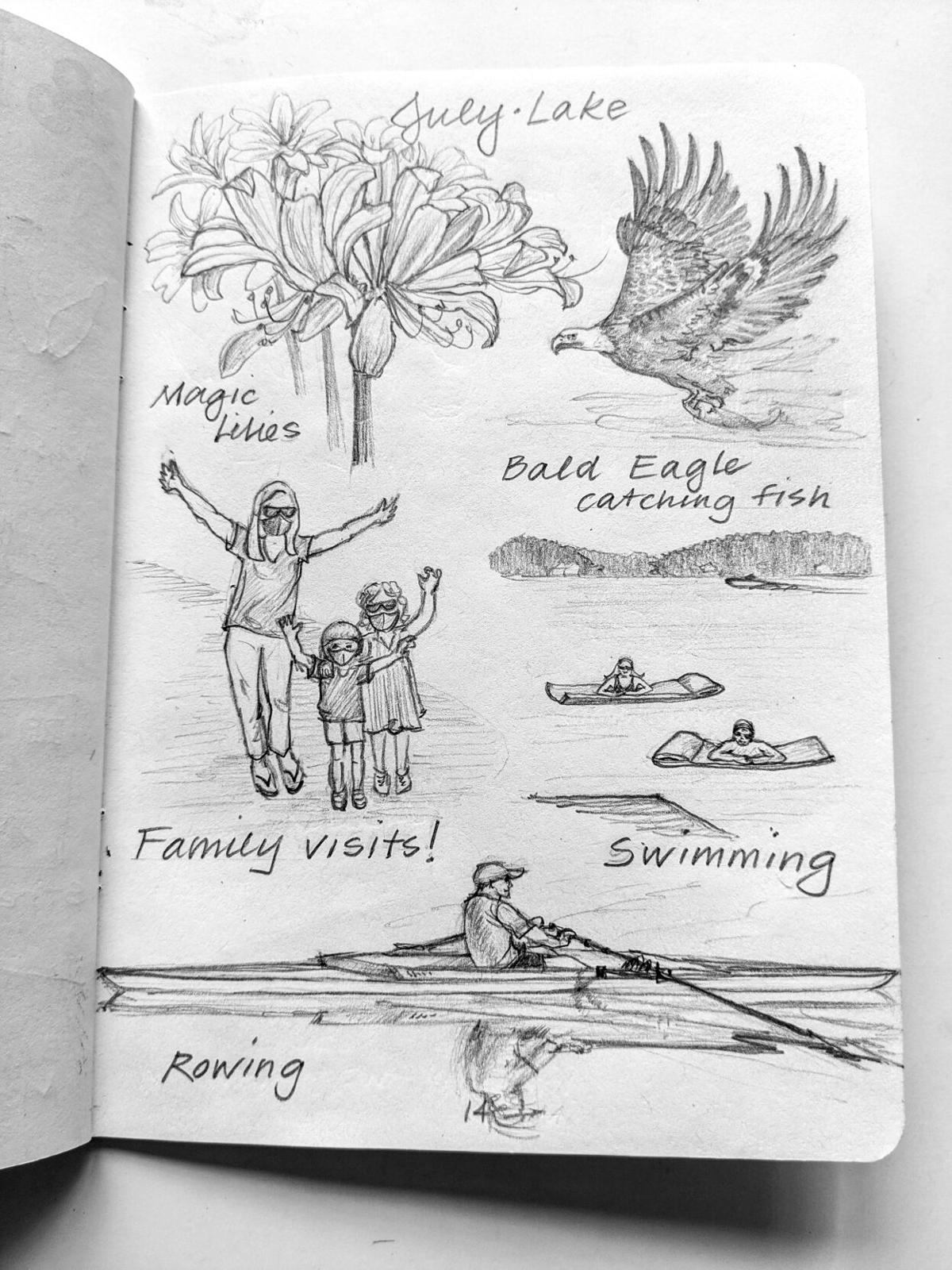 The second page for March has masks, rubber gloves, safety glasses – and a shamrock for good luck.

In June, McPhillips’ drawings in the sketchbook recalled their times at the lake: sunset viewing, sculling, sailing and birdwatching.

Though unintentionally at first, Birmingham’s Louise McPhillips captured the story of the coronavirus pandemic at Lake Martin through a Christmas gift presented to her by her son, a filmmaker in Los Angeles.

“It was a sketchbook from The Sketchbook Project,” McPhillips said.

Founded in 2006 by two artists in Atlanta, The Sketchbook Project now has grown to include a collection of more than 45,000 sketchbooks, which are housed at the Brooklyn Art Library in Williamsburg, New York. Participants in the project purchase a 16-page 5-inch by 7-inch sketchbook from the library, and over the course of six months or so, they draw on its pages; and then, return the sketchbook to the library for cataloging and digitization. The public is invited to stroll into the library and view the renderings, some of which also are available for viewing at the library’s website.

“My husband, Frank, had just retired, and we thought that we would be traveling. I thought I would keep the sketchbook as a running journal of our travels, and I started doing drawings of little vignettes,” McPhillips said.

She planned to illustrate two pages each month with vignettes of the places they visited on their travels and the activities in which they engaged. In January, her pages featured landscape scenes from a family reunion near Mobile and blooming camellias (Photo No. 1). February’s pages included a Mardi Gras celebration in New Orleans. In March, she started by drawing a margarita toast on a sandy beach in Cancun, Mexico, but the second page of sketches looked very different from the first (Photo No. 2).

“We went to Mexico on the 5th of March, and while we were there, places started shutting down,” McPhillips said.

Instead of continuing their travels, the couple returned to Alabama, where protocols and procedures soon were put into effect. McPhillips’ vignettes changed from landscapes to Lysol. She drew masks, rubber gloves, safety glasses – and a shamrock for good luck.

“My first reaction was that this sketchbook was taking on a whole lot of greater significance now. What I thought was going to be a year of travel with exotic things to record instead was looking minutely at small things. I drew bottles of disinfectant, and we planted a huge garden,” she said.

“We were much more aware of the wildlife. We bought a bird feeder at the house in town and just got into watching the birds. Frank said they were our only friends because they were the only ones who came and visited us,” she laughed.

McPhillips and her husband started coming to their Lake Martin cabin during the week to stay away from crowds.

“We spent more time at the lake over the summer than we ever have, typically four or five days a week instead of just the weekends. It really was wonderful, but we were very, very careful. We didn’t ever go out except to keep up with our rowing and canoes and kayaks,” she said.

They rose early at the lake every morning and sat on the dock or in the screened porch, watching the great blue herons and identifying other birds they saw.

“We saw armadillos in our driveway. All these things that we knew were out there but had never seen were emboldened; they were used to not having people around during the week. We saw deer in the driveway. I had never seen a deer here. They eat my hydrangeas, so I knew they were here. We just had never actually seen them. We were more aware of the wildlife and were appreciating that, especially in the early mornings when the great blue herons would come and land on the dock.

“We saw a bald eagle just right off our dock catch a fish. It was like they were putting on a show for us.”

In June, McPhillips’ drawings in the sketchbook recalled their times at the lake: sunset viewing, sculling, sailing and birdwatching (Photo No. 3). July’s vignettes were much the same but included a socially distanced visit with family members wearing masks (Photo No. 4). And in August, they attended church via live stream while sitting on the screened porch at the lake. They canoed and celebrated their 44th wedding anniversary.

McPhillips filled the pages of her sketchbook with these vignettes, creating a record of how life changed and, in many ways, was enriched while observing the coronavirus protocols. Her sketchbook has been received at the Brooklyn Art Library but, at Lake magazine’s presstime, was not yet digitized.

Visit brooklynartlibrary.org for more on The Sketchbook Project.