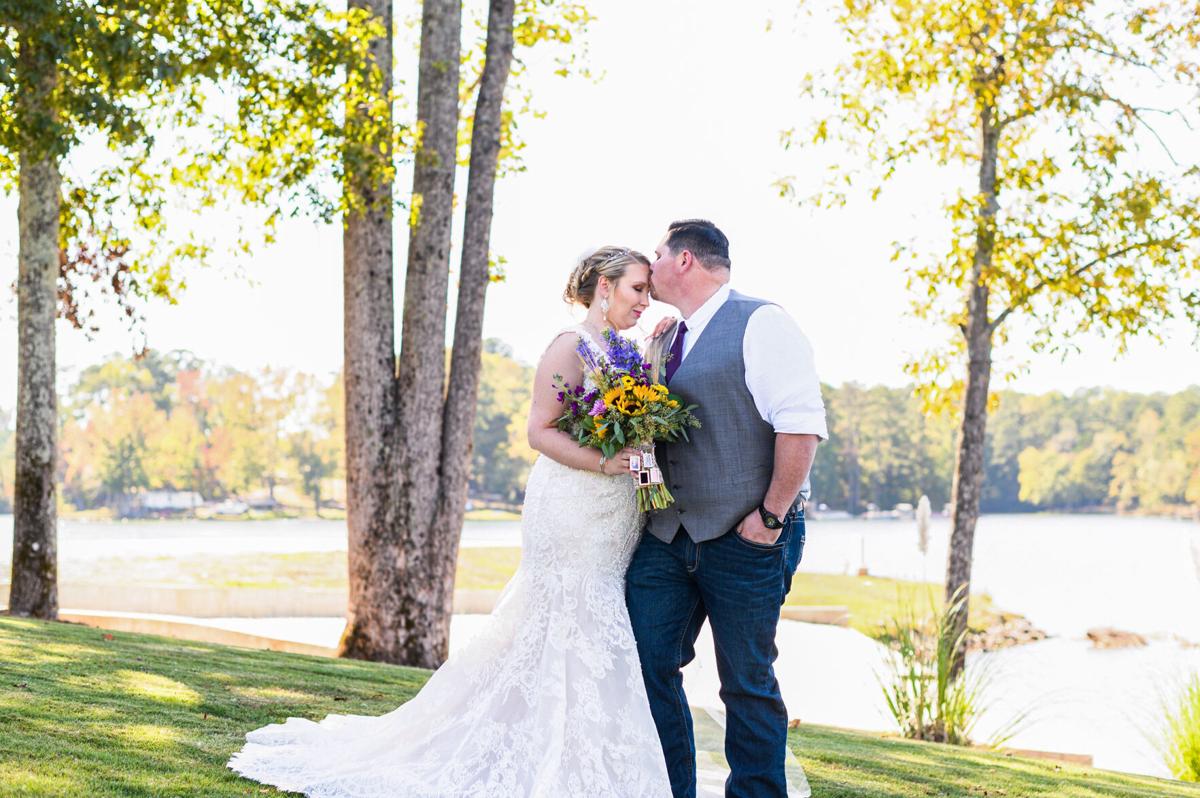 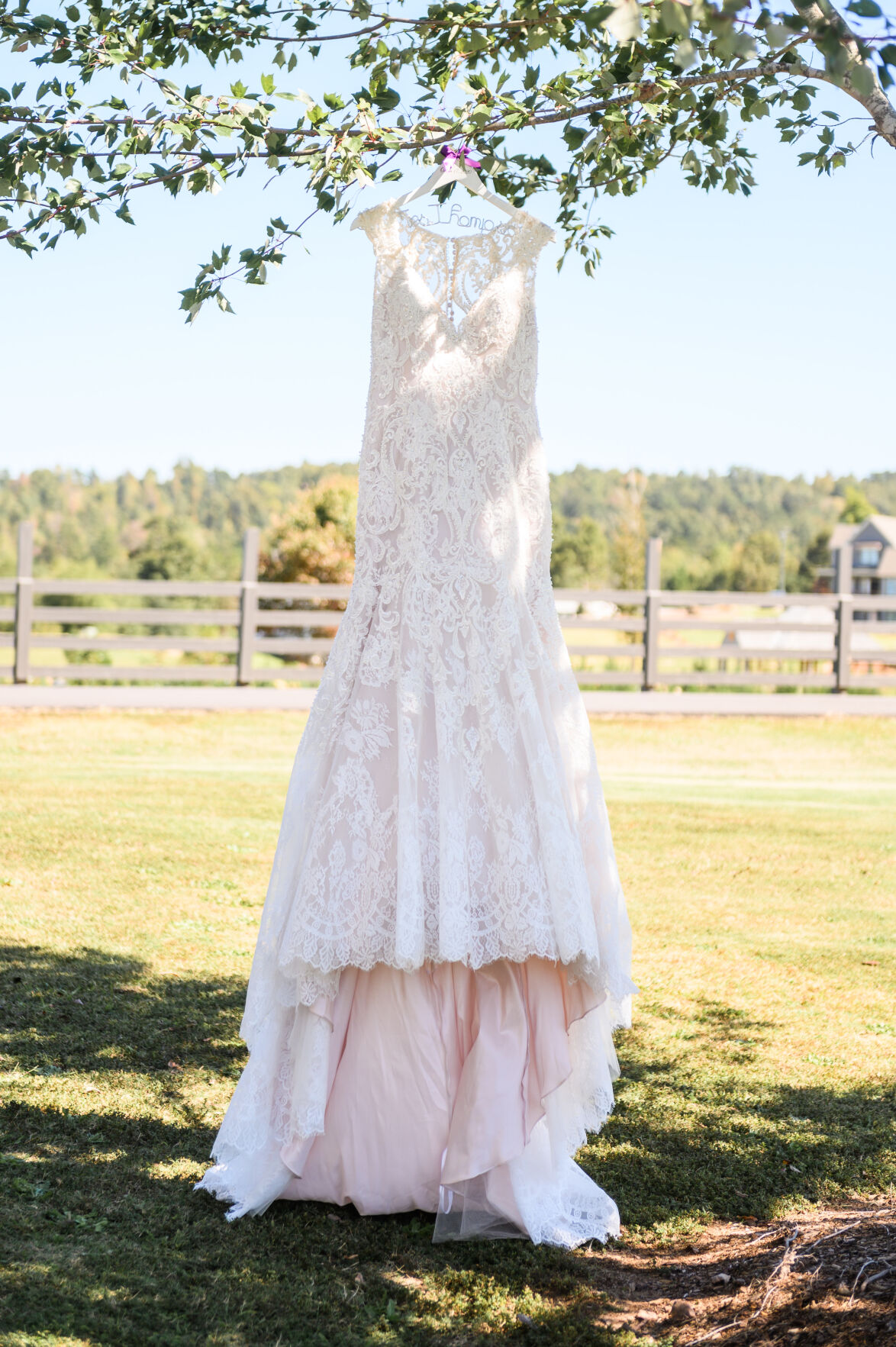 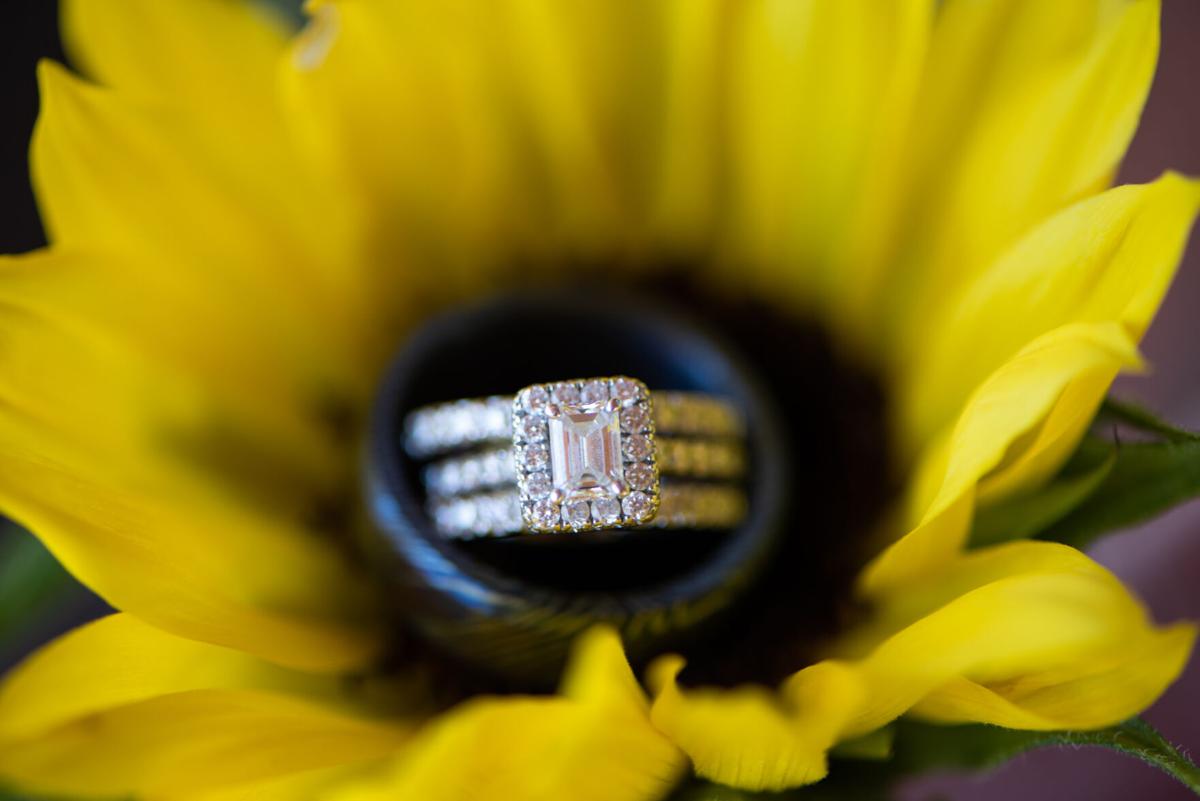 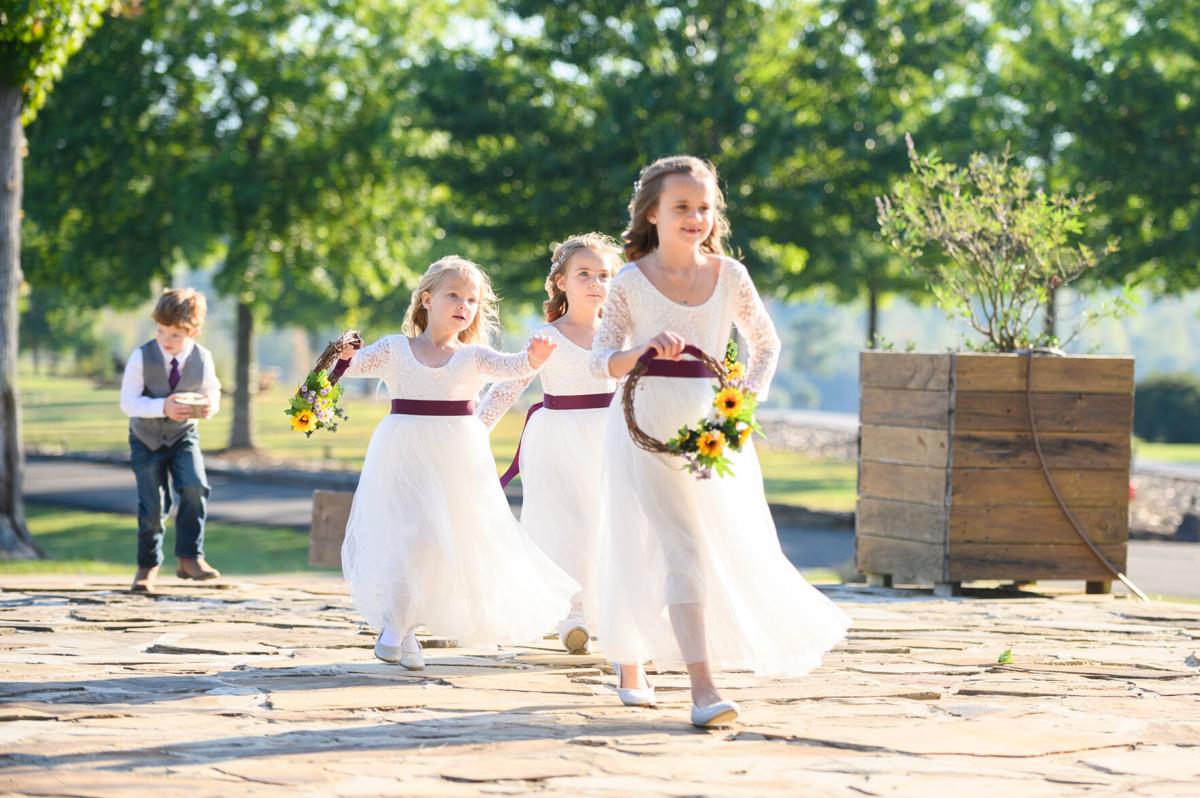 The flower girls were eager to see the blushing bride 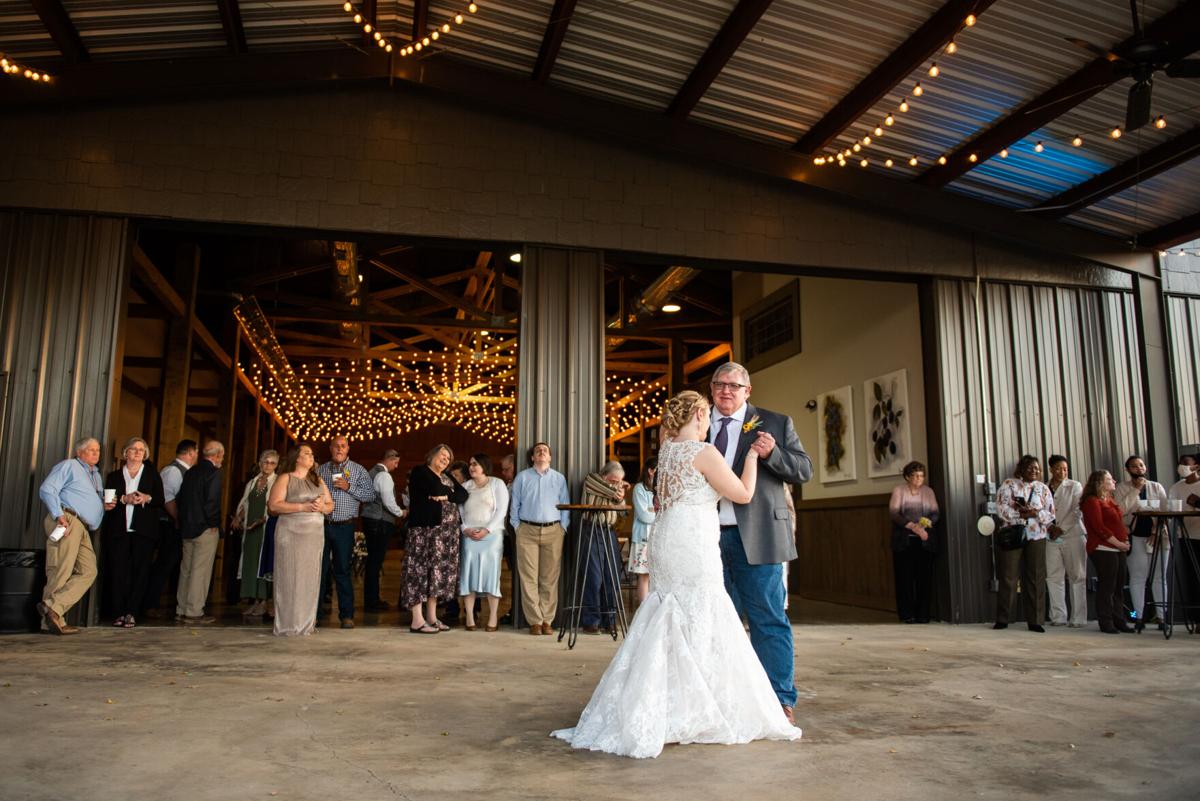 The father-daughter dance was eloquent and memorable 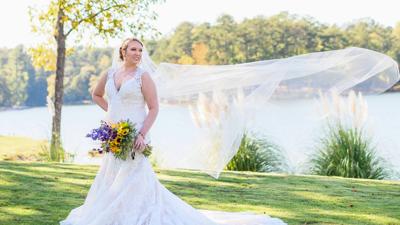 The flower girls were eager to see the blushing bride

The father-daughter dance was eloquent and memorable

Aidenn Faulk and her mother, Cindy, had never been to Lake Martin before Cindy planned a destination wedding at New Water Farms last October that honored her daughter’s cherished childhood memories.

“It was everything we wanted,” said Faulk, who lives in Utah and only made one quick trip to Lake Martin after her parents, who live in Greenville, Alabama, had videoed the venue.

Faulk moved to Utah several years ago to take a medical coding position at a hospital there. Her fiancé, Allan Thompson, was in law enforcement before he moved to Utah to join Faulk. In Salt Lake City, he is a supervisor at a distribution center.

Though they both grew up in Greenville, Faulk and Thompson didn’t become friends until several years after high school, and even then, they didn’t date. They drifted apart when she moved to Utah, but one night, she got an inkling to call him.

“We’ve been together ever since,” she said.

They dated for two years, but Faulk was surprised when Thompson proposed.

“We had gone to see the temple in Salt Lake with all the Christmas lights on. There is a breezeway park with a little bridge, and he proposed on the bridge. The ring was a surprise,” she said.

The wedding-planning process was cyber-based, as Faulk and Cindy exchanged links to websites that explored décor and other wedding ideas. They texted photos, emailed videos with detailed information and talked on the phone.

Faulk wanted her wedding to be different, out of the ordinary, and she found a wealth of ideas on the Pinterest app, including the 7-foot wreath of flowers that Prattville florist Amanda Rylant recreated. She also came across rifle casing boutonnieres online for the groomsmen, who wore jeans, boots, white shirts, gray vests and purple ties.

“My daughter and her fiancé wanted water and rustic,” Cindy said. “At first, they were talking about a barn and water. I got to looking, searching online, and came across New Water Farms.

“I had never been to Lake Martin – never really heard of Dadeville. We fell in love with it once we started looking.”

Cindy contacted the City of Dadeville about possible rehearsal dinner venues in the area and was referred to Zazu’s Verandah.

“It fit every bill we had as far as finding something Aidenn and Allan wanted. It is rustic – something different. And the people that run it are so nice,” Cindy said.

Faulk visited Alabama last February to shop for her fit and flare lace dress and took a whirlwind tour of the wedding venue. New Water recommended Billy Lee at Terra Cotta Café for the wedding caterer, and the food for the rehearsal was done by Country’s Barbecue in Lee County. Faulk chose T2Photography and Devon Forbus as the videographer. New Water Farms allowed 90 wedding guests, and tables were set up to promote social distancing.

Everything was set for the wedding of Faulk’s dreams until the officiant tested positive for COVID-19 the Sunday before the wedding. Fortunately, another minister was already planning to be present.

“When Aidenn moved out to Utah, she met this lady, and the family took her in,” Cindy said. “They would have her over for holidays, and she was invited to the kids’ ball games. They were already coming to the wedding. Their son was an usher, and their daughter was a bridesmaid. The lady’s husband was an associate minister at a church out there, so Aidenn asked her husband to do the wedding. That made it so special.”

When Faulk was growing up in Greenville, she used to “take adventures” with her grandfather.

“Basically, we just walked up and down the dirt road, but I would pick flowers on the adventures,” Faulk said. “My grandfather passed away my junior year in high school, and his favorite flower was the sunflower. I wanted my bouquet to look like I had walked through a field and picked them.

“I had photos in memory of him hanging on my bouquet – him and my Big Mama and also my music teacher.”

As a tribute to her childhood music teacher, Millie McDonald, Faulk and her bridesmaids also wore pearls.

“She was pretty influential in my life. Every time we had choir competition or a solo competition, we wore pearls. She taught us how to pick out pearls in Chinatown in New York. She showed us how to know which were fresh and which were saltwater pearls. She’s passed now, but it was important to me to honor her,” Faulk said.

The wedding was everything Faulk had dreamed of, made all the more special by its coming together one lovely fall day with the people she loves at Lake Martin.