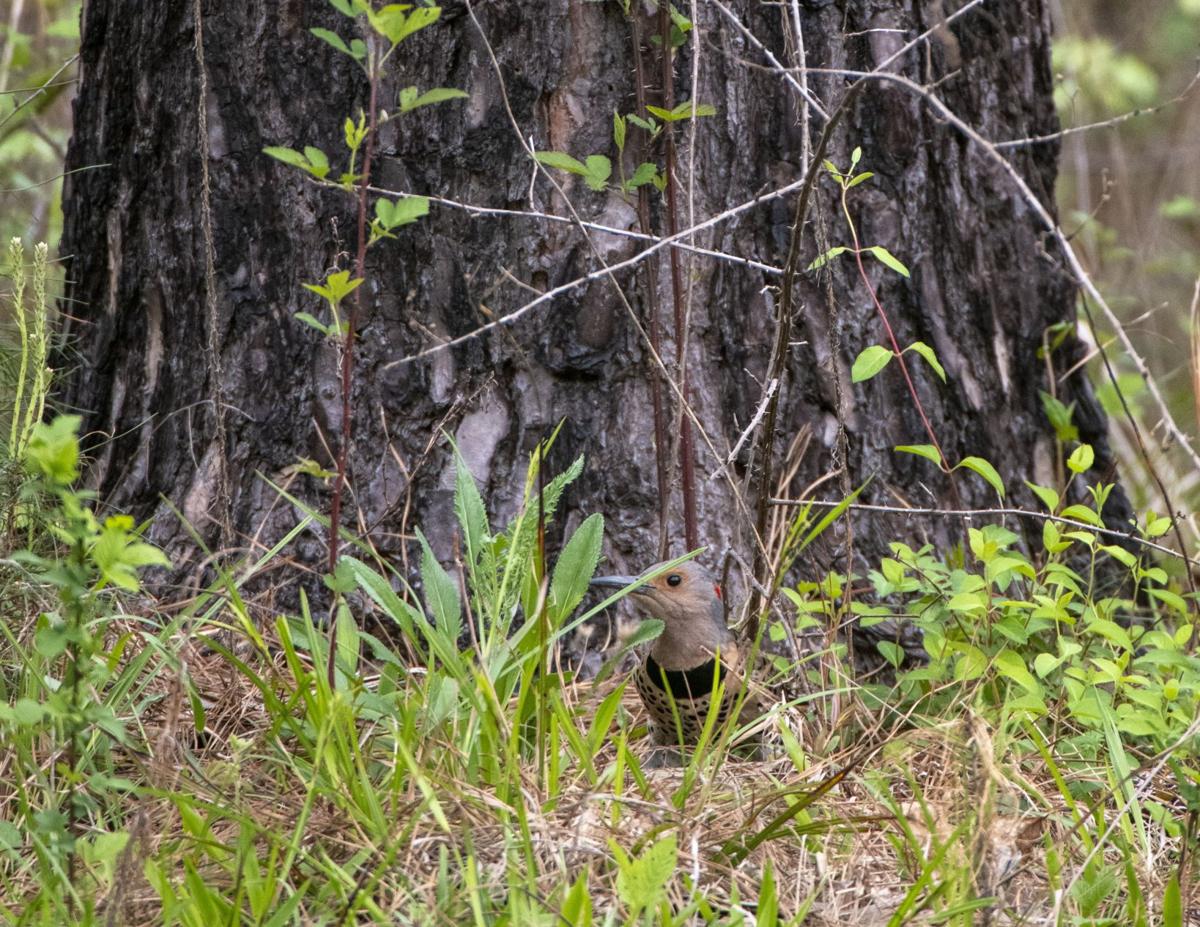 Ants make up more than half of the Yellowhammer's regular diet 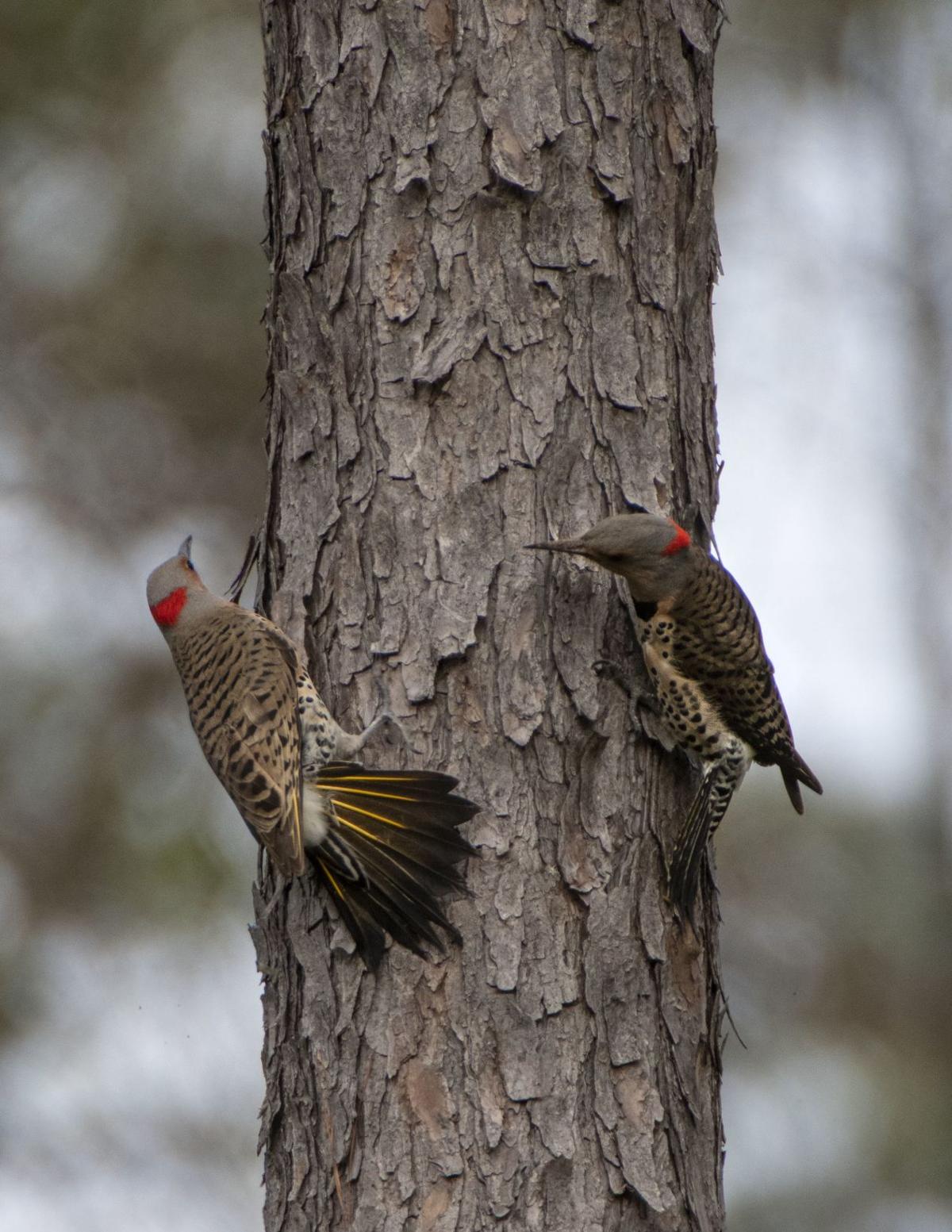 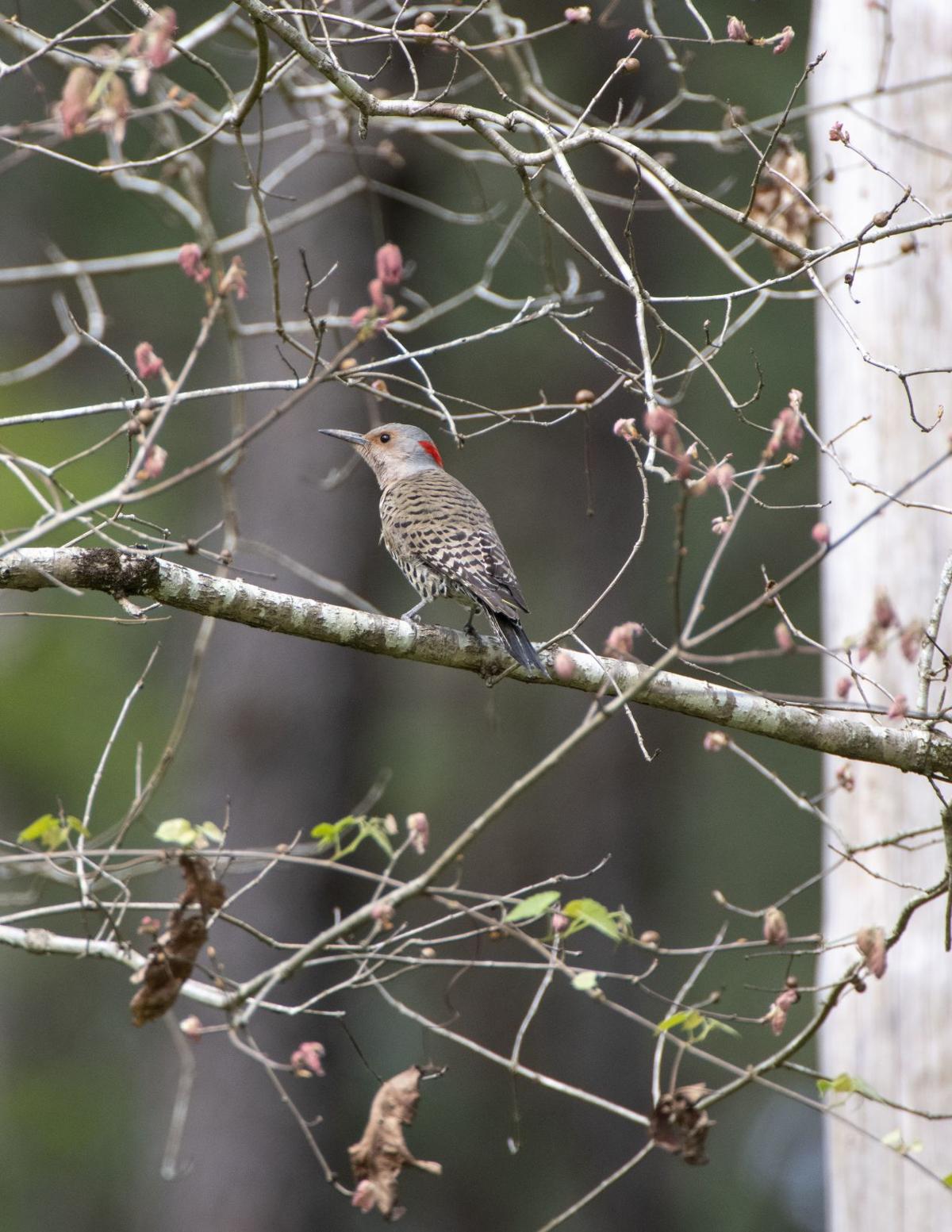 The bird goes by at least a dozen different names and probably more than 100. 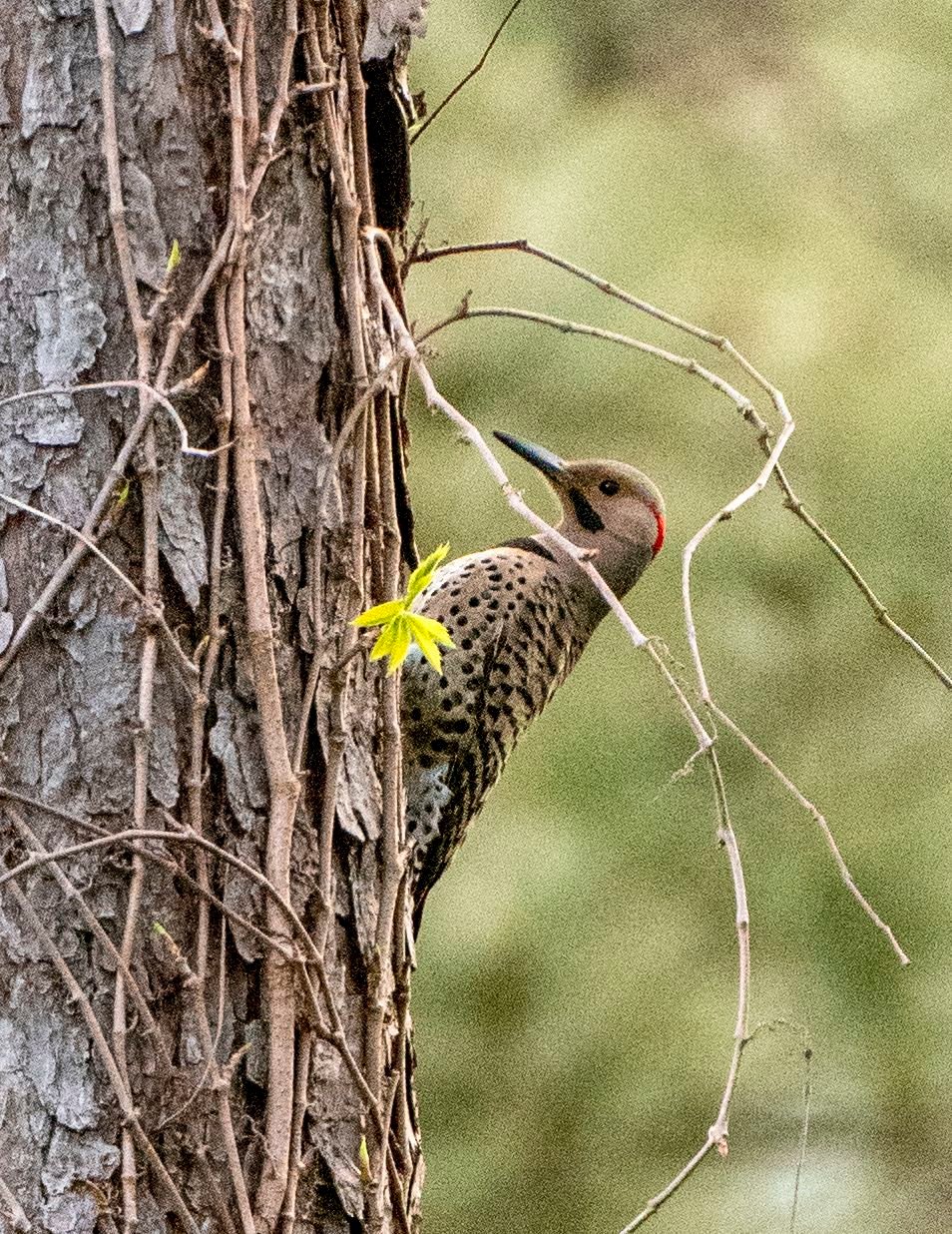 Ants make up more than half of the Yellowhammer's regular diet

The bird goes by at least a dozen different names and probably more than 100.

It’s a name for an Alabamian … and a bird that lives in Alabama (as well the other 48 continental states.)

According to the Alabama Department of Archives, Alabama became known as the “Yellowhammer State” during the Civil War, when Confederate soldiers hailing from Huntsville under the command of the Rev. D.C. Kelly arrived in Hopkinsville, Kentucky, the gathering place of Gen. Nathan Bedford Forrest’s Company A. The Alabama soldiers wore brand new gray uniforms trimmed with brilliant yellow on the sleeves, collars and coattails, which stood out against the dog-eared, battle-faded gray uniforms of Company A.

As the Alabamians rode past, one of Forrest’s soldiers, Will Arnett, cried out, “Yellowhammer, Yellowhammer, flicker, flicker!” which got a big laugh as other soldiers recognized the native bird call and realized that it looked like boys from ‘Bama could have used the same tailor as the well-known gray and yellow “Yellowhammer” woodpecker. Kelly’s troops were forever branded the “Yellowhammer Company.” And before long, all Alabama soldiers were called “Yellowhammers.”

Yellowhammer, the bird, however, goes by at least a dozen different names and probably more than 100.

The most common is Northern Flicker, followed closely – at least on those birds that live in the eastern U.S. – by Yellow-shafted Flicker. Some of the more memorable names include “harry-wicket,” “yawker bird,” “wake-up,” “wick-up,” “clape,” “heigh-ho,” “walk-up,” and “yarrup.”

Ornithologists call this bird Colaptes auratus, but many of its common names come from the sound these gregarious birds make when they greet each other, a loud and distinctive “wick-a, wick-a, wick-a” or “flicker, flicker, flicker” or “wake-up, wake-up, wake-up” … it’s easy to see how this nicknaming came about as each individual bird makes a slightly different sound.

Since we’re in Alabama, we’ll stick with Yellowhammer.

These birds are large for woodpeckers, a little smaller than a crow, weighing 4 to 5.5 ounces and measuring about a foot long with a wingspan up to 20 inches.

Yellowhammers have a sleek, round head and a gray chisel of a bill. When they call, they often fluff up the feathers on their heads and don’t look nearly as sleek.

This is a handsome bird, with a blue-gray head marked with bright red on the back of the neck. Its face is light brown, and it wears a distinct black upturned crescent between the neck and chest, where the light brown of its face fades to buff on the lower belly. The belly is speckled with round black dots. Its back and wings are also brown and marked with black bars and dots.

In flight, the Yellowhammer has a white rump patch that’s very visible when the bird is flying directly away, and the undersides of its wings and tail are bright yellow, with distinctive yellow shafts on their tail feathers.

The males and females look very much alike except that the males wear a black mustache.

Yellowhammers are unique among woodpeckers in the amount of time they spend on the ground, looking for one of their favorite foods, ants, which make up almost half of their diet. Other foods on the Yellowhammer menu include beetles, as well as flies, snails, butterflies and moths and poison oak and poison ivy berries, sumac berries, bayberries and hackberries, elderberries, sunflower and thistle seeds. They use their bills to hammer at ant beds to reach the larvae with their 2-inch-long barbed tongues.

They also sometimes show up at feeders that provide suet, sunflower seeds and peanuts.

These birds live year-round in Alabama, and most of the United States, though not in most of Texas. They are usually found on the edges of fields and forests and around wet areas.

Yellowhammers one of the few woodpeckers that migrate. Those that spend the summer in Canada migrate south into the U.S. during the winter months.

There are nine different sub-species of this bird, including the Cuban and Grand Cayman Yellow-Shafted Flickers.

In the west, subspecies have red-shafted tail feathers. The two color-patterns were once thought to be separate species, but have since they have been found to interbreed in the middle of the U.S. where their ranges overlap.

Yellowhammers have a mating ritual that looks almost comical, where two birds will land on the same tree trunk, face each other with their bills pointed up and move their heads back and forth in time, making a figure-8 motion and blinking their eyes while the prospective mate looks on.

The two females pictured together here on a pine trunk were performing this dance in late March, with a male joining in at times. They called out “wick-a, wick-a, wick-a” (or “flicker, flicker, flicker” or “wake-up, wake-up, wake-up” … )as they moved their heads and made quite a commotion in the forest. Eventually, one of the females left and the remaining pair worked together to hammer out a nest in a dead loblolly pine.

The inside of a Yellowhammer nest is just chiseled out wooden walls, roughly a foot deep, with the chips on the bottom. It takes a mated pair working together between one and three weeks to excavate the nest.

Yellowhammer mothers usually lay six to eight white eggs, and the chicks hatch out after about 12 days of incubation, pink and featherless with their eyes closed. They remain in the nest for 24 to 28 days before fledging. For the first two-and-a-half weeks of their lives, they sit on the bottom of the nest in the wood chips. During the last 10 days as fledglings, they hang onto the wooden walls inside their nest, taking on a traditional woodpecker stance.

Like most of the other 11 woodpeckers native to the Americas, Yellowhammers have a distinctive up-and-down flight pattern that would look like a wave pattern if you tried to draw it.

They communicate using several different calls, including a “ki-ki-ki-ki” call and a call that sounds sort of like “pee-oh,” and by drumming.

Loud drumming – rhythmic pecking – is thought to be a defense against other woodpeckers coming into their territories, so the louder the better. A Northern Flicker in Wyoming was heard drumming on an old tractor half a mile away.

These birds can be long-lived, with the record at nine years, two months, though few live past seven years.

Information for this article came from Cornell University’s AllAboutBirds.com, Audubon.com, the Alabama Department of Archives and Outdoor Alabama.

Have you ever heard an agitated “squeaky-toy” sound in the pines?