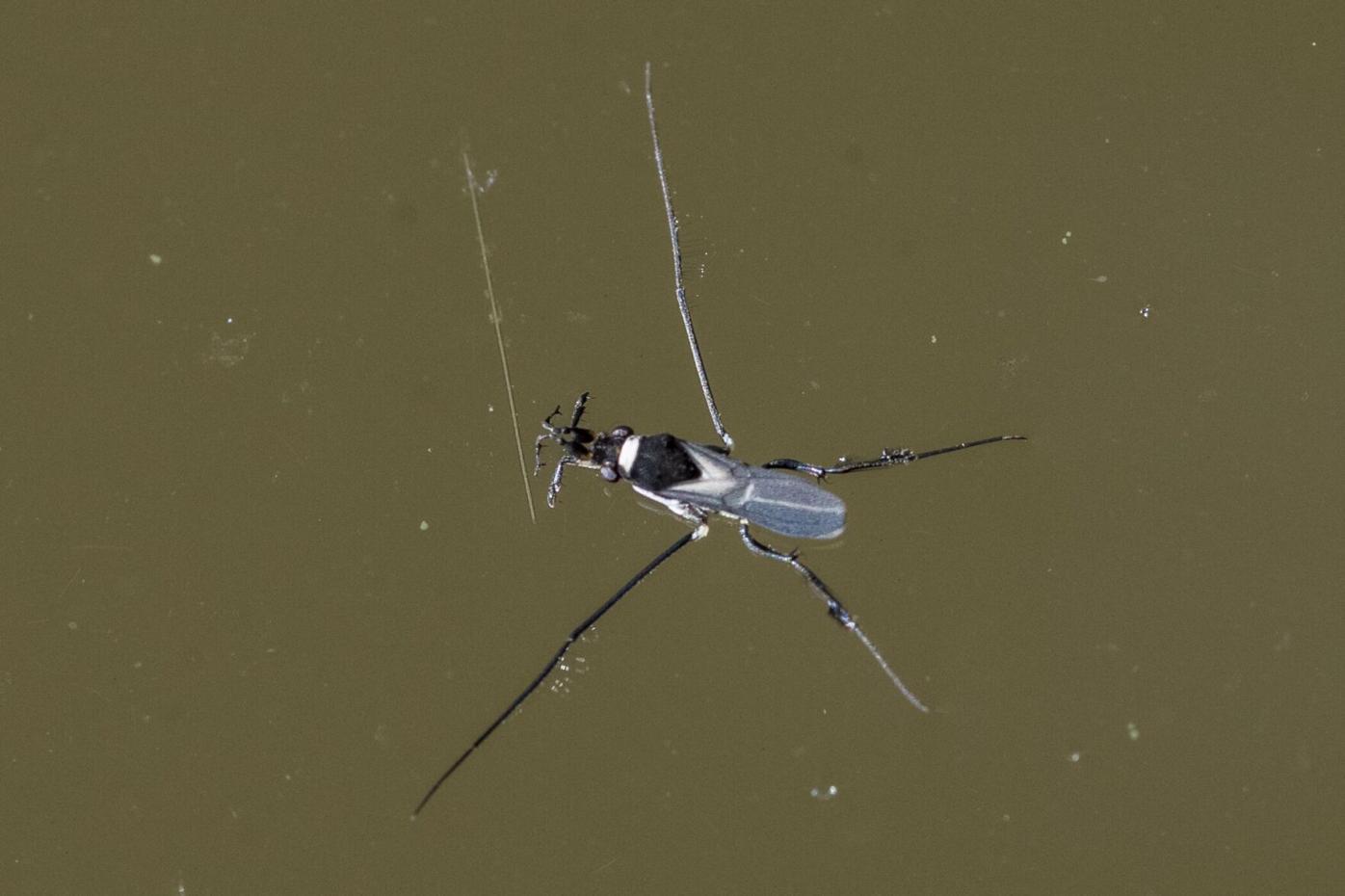 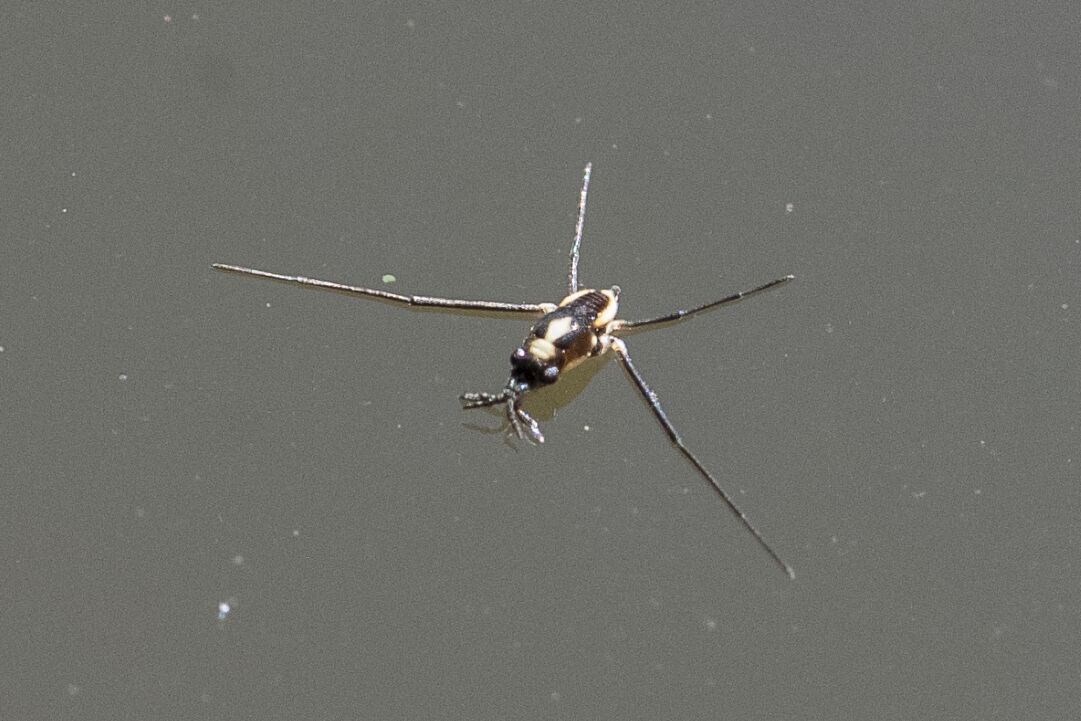 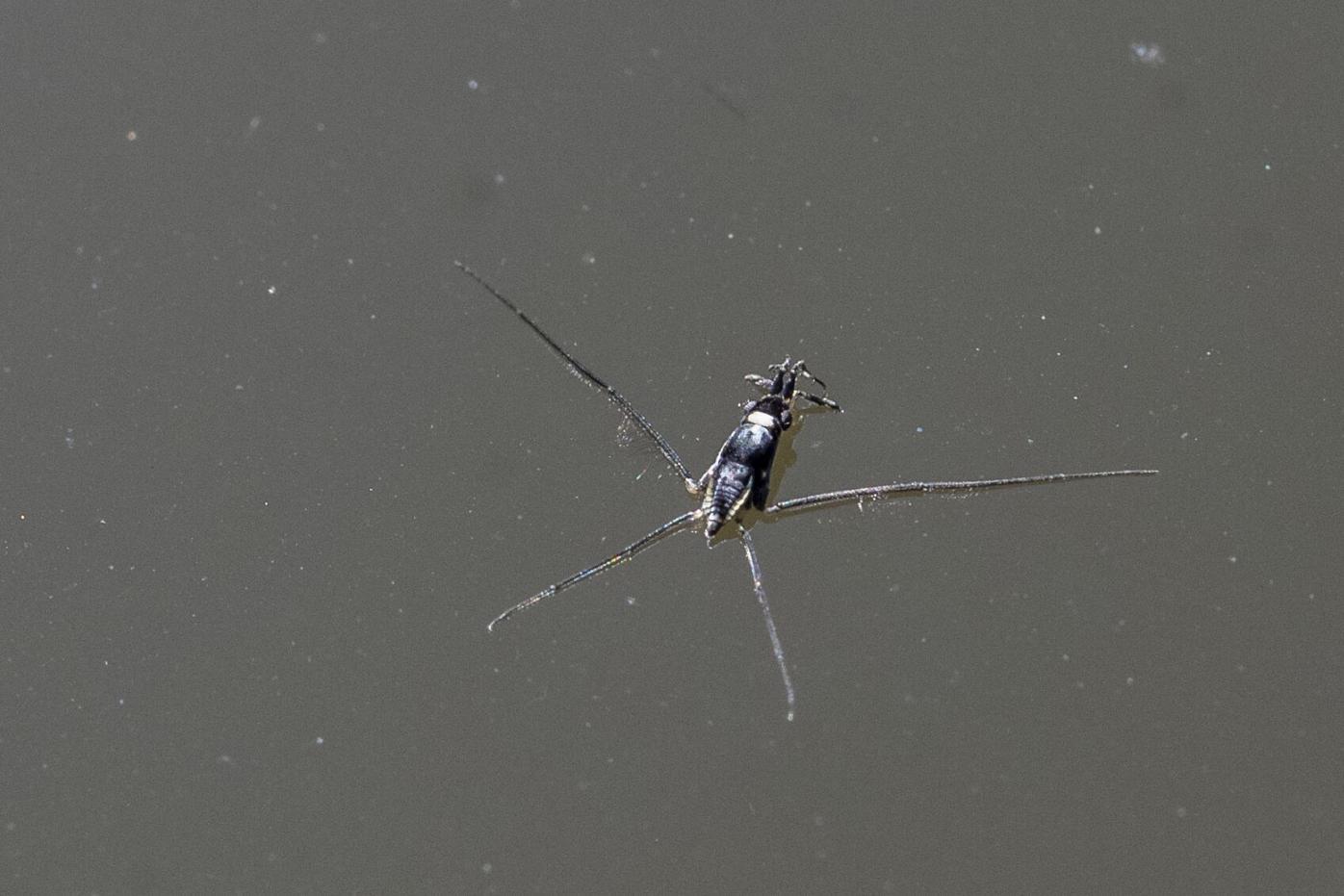 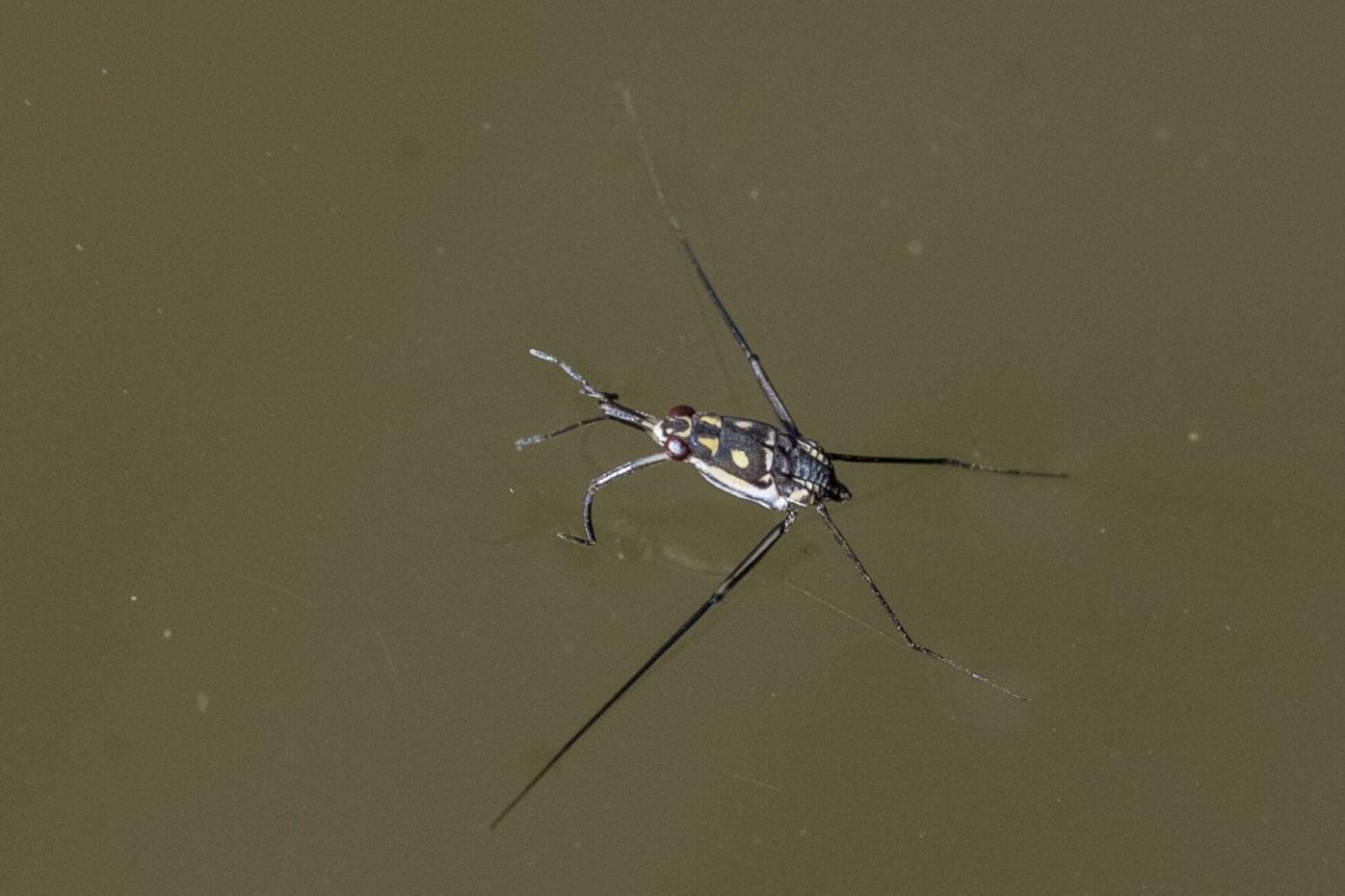 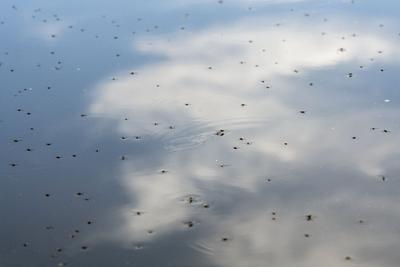 If you’re on Lake Martin, there are almost certainly tiny insects nearby with an amazing, Biblical talent.

In fact, there are probably a whole lot of them, but because they are so small and so inconspicuous, most people don’t pay them much attention.

Water Striders are tiny bugs that walk on water.

Anyone who has ever done a cannonball off a pier knows that there is no way water will hold up a person. We just crash right through the water’s surface and go under.

But because Water Striders are so light and have specially adapted hydrophobic legs, they are able to float above the water’s surface with just their legs making contact. If you look very closely, you may be able to see dimples in the water, called a meniscus, where their legs push against the surface.

In fact, if a wave submerges a Water Strider, the air trapped in its leg hairs is buoyant enough to float this insect back to the surface.

A Water Strider has four long, thin legs attached to the middle of its body, and two shorter appendages that are near its head. Its hind legs are used for steering while its middle legs are used for rowing, pushing backward against the water, which moves the strider forward. Its front legs have claws that are used to grab prey.

The powerful paddling legs allow a Water Strider to move extremely quickly, up to a hundred body lengths per second. A 6-foot-tall person would have to swim at over 400 miles an hour to match that relative speed.

These bugs go by a number of common names, you can probably guess one of them: Jesus bugs. They are also called Pond Skaters and Water Skippers.

There are many species of Water Striders – about 1,700 are known to science now – but they are all members of the same family, Gerridae, and they are collectively known as gerrids.

Most gerrids live in fresh water, but about 10 percent of the species live in marine environments of saltwater and brackish water.

They are found in almost any body of water you’re likely to come across, but they are much more likely to be found in still or slowly moving water.

These small insects look sort of like spiders. The word “strider” also sounds a lot like “spider.” And to make it even more confusing, there are “water spiders.”

But spiders and striders are two very different creatures.

If you ever have any doubt about what critter you’re looking at, count its legs. All spiders have four pairs of legs that they use for walking and another pair they use as arms to grab prey. Water Striders have two pairs of legs used primarily for walking on water and two more that are used primarily as arms. So spiders get around on eight legs while striders only need four.

Water Striders eat small insects – anything from dragonflies to aquatic bugs – that they snatch off the water’s surface. Their front legs are hinged and have claws like a preying mantis, which allows them to quickly grab their dinner.

Their legs are very sensitive to ripples on the water, and when they feel an insect struggling on the surface, they race to grab it. Then the Water Strider will pierce its prey with its proboscis and inject it with enzymes that liquify the prey’s internal organs. It then sucks out the fluid and calls it a meal.

Here’s a fact that should make most Lake Martin residents appreciate these tiny predators – they are especially skilled at capturing mosquito larvae.

When a Water Strider is preyed upon, it is most often by birds. Fish and frogs will also eat striders, but researchers have found that birds are its primary predators.

Water Striders are territorial, and they communicate with each other by vibrating their legs at certain frequencies. Making fast ripples is a warning signal.

When males send out a warning signal and another strider doesn’t move away, it assumes the intruder is a female, and it will make slower ripples to court her. If she is in the mood, she will lower her guard and allow the male to climb onto her back. If she does not want to mate, she returns the warning signal.

Some Water Striders deposit eggs on the water’s surface. Other strider females submerge and lay their eggs on underwater vegetation. Most clutches are two to 20 eggs that are initially white or translucent but then turn bright orange. When the eggs hatch, the nymphs molt five times over 60-70 days before they reach maturity.

Some Water Striders have wings, while others do not. Striders in very calm water typically have larger wings than those in rougher water, where large wings can be easily damaged. Some species have wings or not depending on conditions in their environment. A parent Water Strider could have one brood in a stable pond without wings, but if that pond begins to dry up, its next brood could have wings, so the offspring would have the ability to fly away and search for another water source to colonize.

Two good ways to observe Water Striders are to either lay down on a pier and watch them from above, or get into the water right up to your nose and be very still and take a look at them from a strider’s viewpoint.

Some information for this article came from Dr. Michael J. Rapp on bugoftheweek.com, the National Wildlife Federation, Cool Green Since and Wikipedia.