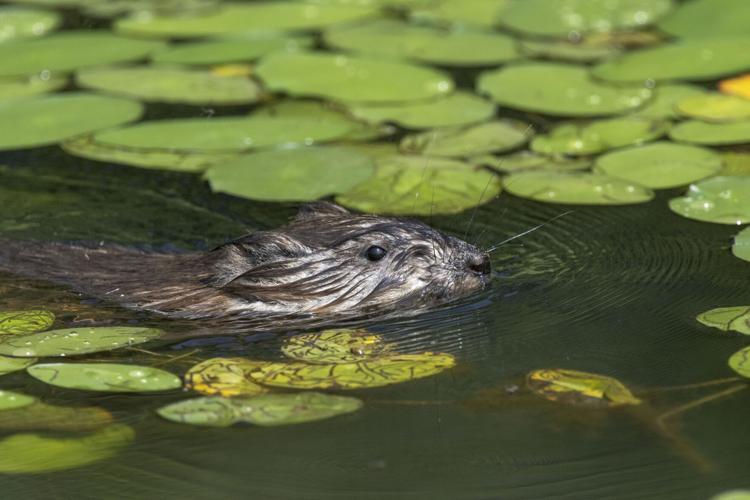 Muskrats are excellent swimmers and are most active at dawn, dusk and night 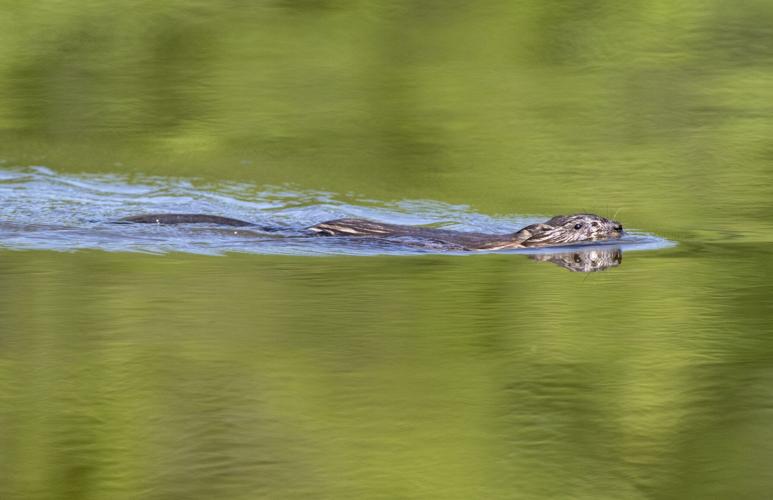 Muskrats often are mistaken for beaver in the water, but the tails are different 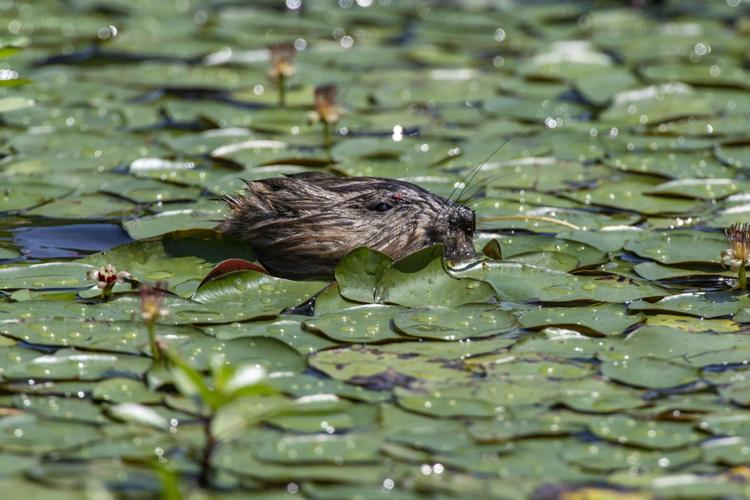 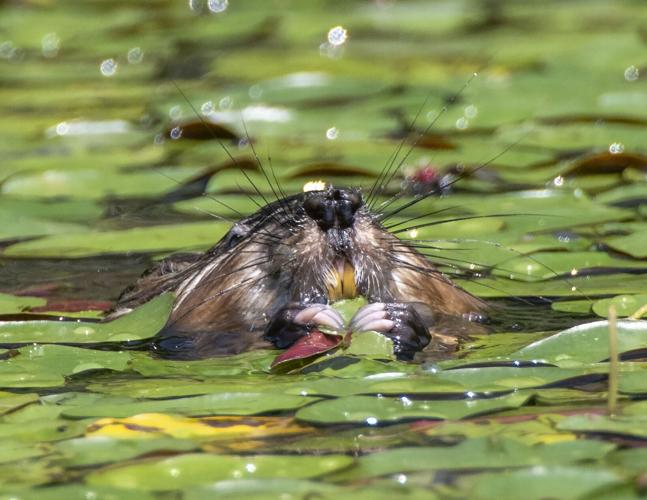 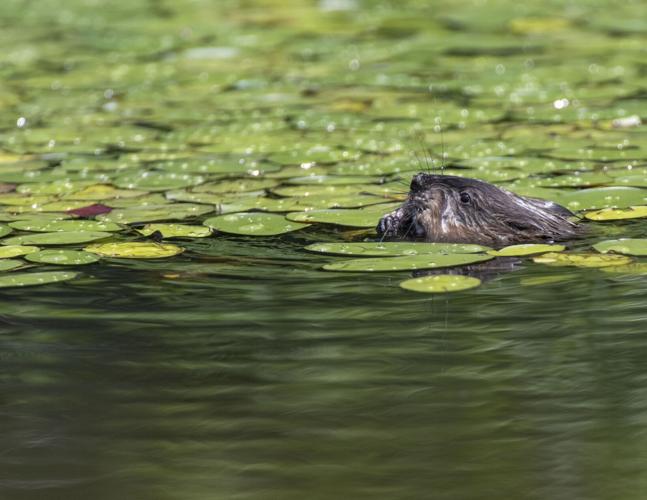 Muskrats are excellent swimmers and are most active at dawn, dusk and night

Muskrats often are mistaken for beaver in the water, but the tails are different

Muskrats are often mistaken for small Beavers. That makes sense because they look very similar. They are found in the same places and do the same things, though Beavers are the more popular rodent because they somehow seem more cuddly and cute. After all, ‘Muskrat’ has the word ‘rat’ in its name.

Muskrats are much larger than Brown Rats, much smaller than Beavers; they range from 1-1/2 feet to a little over 2 feet long. About half a Muskrat’s length is made up of its long, flat tail, which is covered with scales instead of fur like the rest of the animal. Muskrat tracks are easy to identify because its tail drags on the ground when it walks, leaving a slightly wavy line between the footprints.

These rodents weigh up to 4-1/2 pounds. By comparison, a Brown Rat weighs about a pound and a Beaver can weigh more than 60 pounds. So the Muskrat is the rodent in the middle both in size and weight – but is not closely related to either.

Excellent swimmers, Muskrats use their webbed rear feet and their vertically flat, serpentine tails to swim; the tails also serve as rudders. One of the quickest ways to distinguish a Muskrat from a Beaver is to look at their tails: Beaver paddles are broad and flat and move up and down, while Muskrat tails are long and slender and move side-to-side.

Both males and females have musk glands located near their sexual organs that are used to communicate through strong scent. That’s useful because Muskrats do not have good sight or hearing or a refined sense of smell.

Native to almost all of the U.S. except the Florida peninsula, Muskrats also live in Canada and northern Mexico, inhabiting many types of wetlands from ponds to lakes to rivers and swamps. In Europe, where Muskrats were imported, they are known as an invasive species.

Muskrats are most active at dawn and dusk and at night, though they also have been seen swimming and feeding in daylight.

They live in family groups of a male and female with their young. Where possible, Muskrats make nests by digging into a bank along a body of water. Most nests have underwater entrances so the Muskrats can leave and return without being seen. In flat areas, like swamps, Muskrats will build an above-water mounded den of mud and sticks much like a Beaver.

Like most rodents, Muskrats breed … a lot. They can have two to three litters a year, each with six to eight kits. So one couple can begat more than 20 baby Muskrats a year, each of which becomes mature at the age of six months here in the South. Muskrat populations tend to boom and bust, so one year you might see many, and the next not so much.

A Muskrat wears a fine coat of thick, relatively short fur. The fur is dark brown or black on the animal’s back and lighter brown on its belly. An older Muskrat may have gray fur. Muskrat fur is made up of two layers, which helps provide insulation against cold water. It’s high insulation factor and luxurious look mean that Muskrat fur is highly sought in the fur industry. A coat made of Muskrat pelts can cost thousands of dollars.

Like Beavers, Muskrats are also semiaquatic rodents. They spend most of their time in the water eating water plants. Muskrats eat green plants, and they eat plenty of them, consuming about a third of their body weight each day. They use their four large, chisel-like front incisors (two on top, to on the bottom) to cut up plants. They have the ability to close their mouths and chew underwater; Muskrats also have the ability to seal off their ears when they dive underwater.

A list of Muskrat foods is almost the same as the list of plants that live at the water’s edge. It includes cattails, water grasses, pond weeds, water lilies and the water shield “small lily pads.” At times, Muskrats will eat animals, such as mussels, frogs and fish as well, but their diet is roughly 95 percent vegetation.

Biologists know the Muskrat by its scientific name Ondatra zibethicus. Ondatra is the Native American Huron tribe’s word for this animal, and zibethicus means “musky.” The term Muskrat could have come from an Algonquian word, muscasus, which means “red,” or the name could simply be a combination describing the animal’s musky smell with a more common animal that it resembles, the rat. This animal was also known as a Musk-Beaver and a Marsh Rabbit.

Historically, trapping Muskrats provided trappers with pelts that they could sell and meat they could eat or sell. Cambridge, Maryland, is the home of a somewhat famous Muskrat leg-eating competition – kind of like a chicken wing competition with more bones – that was part of its 10th annual Crawfish Boil and Muskrat Stew Festival this May.

The critters that eat Muskrats are numerous and formidable: river otters, hawks, owls, eagles, coyotes, bobcats, raccoons, minks and alligators, in addition to folks from Maryland.

The diminutive Muskrat has one defensive tactic when threatened: run and hide. Or actually swim and hide. Muskrats are very good swimmers, and they can hold their breath for more than 15 minutes, which gives them plenty of time to move underwater and seek shelter in a burrow or nest or just by resurfacing a long way away. One scientist reported watching a Muskrat swim 100 meters underwater on a single breath. Muskrats have excellent mobility in the water with the ability to swim both forward and backwards.

Muskrats are not a physical threat to people, but they have been known to eat agricultural grains and cause problems with dams and dikes by burrowing into them and weakening the structures.

This animal figures strongly in culture. Muskrats are the animals that brought soil up from the waters and established the earth in multiple Native American creation stories. In strongly Roman Catholic communities where eating flesh was forbidden on Fridays, Ash Wednesday and during Lent, fish and Muskrat were officially allowed on the dinner plate. Muskrat pelts were once sold as “Hudson Seal” furs to make the fur sound more like something ladies would like to wear. And then there was The Captain & Tennille’s 1972 hit tune, “Muskrat Love,” that had something to do with rodent romance (see paragraph 7).

Some information for this article came from animaldiversity.org at Michigan State University, inaturalist.org, NatureWorks from the New Hampshire Public Broadcasting Service and Scientific America.