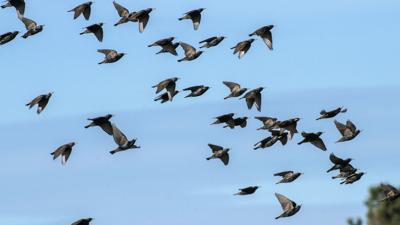 During the last century, European Starlings overran North America – at least the United States and Canada. The northern part of Mexico has some Starling activity, but the Mexicans have been spared much of the invasion.

The magnitude of the problem can best be summed up by this statement from an Audubon.org story titled “Birdist Rule #72: It’s Okay to Hate Starlings.” “There are probably more European Starlings in the United States than any other species,” the story reads. “But there shouldn’t be any at all — they’re invasives.”

That makes this story sound a little like modern politics.

This bird originally hailed from Europe, the Middle East and Western Asia. But European Starlings have been introduced to many temperate climates around the world, in both the northern and southern hemispheres.

It’s no secret that experts view European starlings negatively because they do cause a number of problems for native birds across the country. But you’ve also got to admire the birds’ accomplishment here: The North American Starling boom is a case of wildly successful adaptation to the New World, a lot like the human settlers from Europe that flooded in a century before. These birds are aggressive, flexible, smart and resourceful, and they took full advantage of new territory.

They ‘invaded’ our country in 1890 with wrong-headed assistance from the American Acclimatization Society, a group that wanted to populate America with all the bird species mentioned in Shakespeare’s writings. So they released a total of about 100 birds in New York City’s Central Park on several occasions. And it worked. Although there are at least a dozen subspecies of European Starlings found around the world, in North America there is only one, and all the starlings found here are almost genetically indistinguishable from those released in Central Park 130 years ago.

Starlings take over holes in trees used for nesting by a wide range of native birds, from bluebirds to owls, woodpeckers, purple martins, nuthatches and chickadees. They often fly in huge flocks and can damage agriculture crops in short order. It is estimated that European Starlings cause more than $800 million in crop damage each year. They are noisy and can spread disease and invasive seeds with their waste.

European Starlings are dark, medium sized birds, about the size of a Robin. They weigh between 2 and 3-1/2 ounces and have wingspans of 12 to 16 inches. Their bodies are compact and chunky. They have short, pointed tails and wings. They have sharply pointed beaks. In flight, their pointed beaks, wings and tails make them look something like four-pointed stars, which is how they get their ‘starling’ name. They also are called Common Starlings. Their scientific name is Sturnus vulgaris, which basically means ‘common starling’ in Latin.

From a distance, European Starlings look black, but they actually wear coats of many colors. During the breeding season, they have dark green-purple iridescent plumage flecked with tan and brown, and they have yellow beaks. Birds that are not in breeding mode can have much more brown and white speckling in their plumage, and their bills are darker. Juveniles are almost all sandy brown with dark bills.

These birds are very vocal, and a large group in a tree or power line or tower or building is super noisy, as the birds make a myriad of sounds, from clicks and whistles to whirring noises. European Starlings also are mimics that can imitate the calls of a wide range of American species, from Red-Tailed Hawks to American Robins, as well as human voices and even the sound of a machine or a pet.

One of the coolest things about European Starlings is how they fly in synchronized motion as a cloud of birds called a ‘murmuration.’ Anyone who has watched schools of minnows moving together would recognize the starlings’ flight as an aquatic display of the same behavior. And it is fascinating to watch hundreds or thousands (or literally millions, in some locations) of birds diving and swirling and turning together like tiny Blue Angles, flying close without bumping each other, their flock looking alternately thin and dense as it turns in a naturally artistic group display. Sometimes, these large flocks of starlings include other species like cowbirds and blackbirds.

Omnivorous European Starlings eat almost everything they come across, from a wide range of insects to earthworms, snails and lizards to grains and fruit and even birds’ eggs to ticks on cows’ backs and livestock feed.

During spring and summer breeding season, unattached males find tree cavities and build their nests, using whatever they can find to pad the inside, to attract a partner, and they sing while they work. They are known to use flowers and herbs to make the potential home look and smell better for potential mates. When a gal flies close, the male ratchets up his song in a bid to get her attention. Once the pair copulates, the female lays a pale blue or whitish egg each day for four or five days. She and her male partner sit on the eggs for about 13 days per egg, so within three weeks all the chicks are hatched.

Chicks are born blind and featherless, but their feathers start coming in within a week, and nine days after hatching, their eyes open. Three weeks after they hatch, they fledge and after another week or two, they head off on their own. Starling couples can raise up to three broods a year, but two is the average in our part of the country.

In 1960, a large flock of starlings in Boston was responsible for what is still the most deadly bird-caused airplane crash in U.S. history. Sixty-two people died when a turboprop airplane flew through the birds, sucking a number of starlings into the engines, which caused a power failure and sent the plane down into the sea.

Although most U.S. birds are protected, since European Starlings are an invasive species, there are no protections against killing them or removing nests in our country. In fact, the U.S. government itself poisoned, trapped and shot 1.7 million birds in 2008.

But European Starlings are not despised by all. They do well in captivity, and their ability to mimic has made many a prized pet. Mozart is said to have owned a starling that he bought after hearing it sing part of Piano Concerto in G Major, which he had written several weeks earlier but had not been played publicly.

Some information for this article came from Cornell University’s All About Birds website, the Audubon Society, National Public Radio and The Spruce.