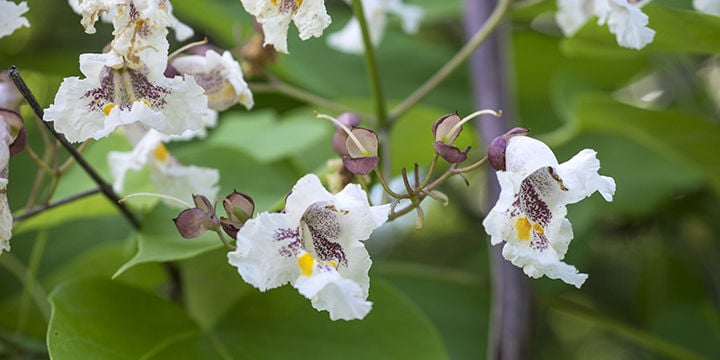 The bell-shaped flowers bloom in late spring or early summer. 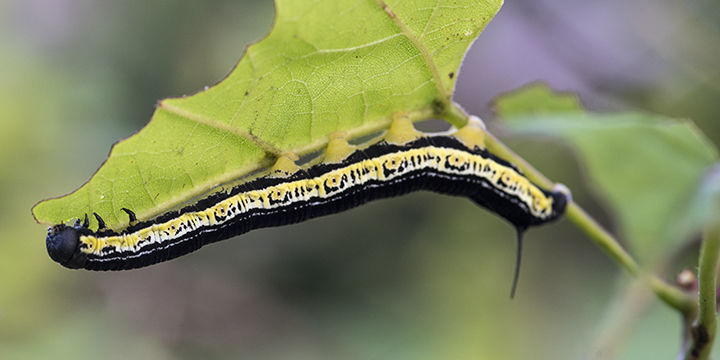 A Catawba worm can strip a tree in a matter of days.

The bell-shaped flowers bloom in late spring or early summer.

A Catawba worm can strip a tree in a matter of days.

The Southern Catalpa tree is an icon of the Deep South. And if you’re standing on the shores of Lake Martin, you’re right in the middle of its home range.

It is a beautiful, extremely useful tree; one you need to know about if you’re going to claim Deep South roots with a straight face.

Catalpa bignonioides is a medium-sized tree native to a rather small region of the Southeastern United States, an area that includes central and southern Alabama, western Georgia, parts of the Florida panhandle and parts of eastern Mississippi. This tree is also known as a cigar tree, lady cigar, bean tree or Indian bean tree because of its long, thin seed pods. The word “Catalpa” comes from the Cherokee name for this tree. It is sometimes spelled Catawba.

This tree is also referred to as a fisherman’s tree, fish bait tree, caterpillar tree or worm tree because at certain times of the year, it is host to hoards of catalpa sphinx caterpillars called “Catalpa or Catawba worms” that are highly prized for fishing.

The “worms” are solid black with white and yellow markings on their sides, and sometimes on their backs, and large, thick, clingy yellow feet. A large black upraised spike is located on the caterpillar’s tail. When one of these caterpillars is squeezed or hooked, a green goo emerges from its body. Both kids and fish find this fascinating. Savvy fishermen watch catalpa trees, and when the leaves start looking ragged, they know its time to go collect the catalpa worms and freeze them for their next fishing trips.

Since this tree is often found on creek banks anyway, fishermen sometimes plant them on the edges of ponds so falling caterpillars will attract hungry fish and create a natural fishing honey hole.

These worms can strip a catalpa tree of its leaves in a matter of days, but the leaves will grow back without damaging the tree. Sometimes it can happen multiple times during a summer as successive generations of Catalpa Sphinx Moths lay their eggs on the trees.

Southern Catalpa generally reaches a mature height of 30-40 feet but in optimal conditions can grow much taller. Its shape is irregular, and its branches can stretch out as wide as 40 feet, but less is more common. The largest known Southern Catalpa is an 88-footer from Mississippi that is on the National Registry of Big Trees.

This is a deciduous tree (meaning it loses its leaves in fall) with up to 10-inch-long, light green, heart-shaped leaves. Catalpa leaves have several unusual characteristics. One is that they smell faintly rank when crushed. A related tree, the Northern Catalpa, looks very similar, but its leaves do not smell bad when crushed. A second unusual trait is that the trees produce copious amounts of nectar, which is released as the Catalpa worms munch away.

Southern Catalpa flowers are stunning, white bell shapes with magenta and yellow markings in their throats. They look very orchid-like, and in contrast to the leaves, they smell nice, too. The flowers reach about an inch and a half across and grow in clusters on upright panicles (flowered stems) in a loose pyramid shape. These are perfect flowers, meaning they have both male and female parts, with five lobes. Blossoms don’t last long when they bloom in late spring or early summer, but they are beautiful while they last.

The bark of a young Southern Catalpa is thin and a bit fragile, but as the tree grows, its bark becomes thickly fissured with reddish-brown scales. The wood from the Southern Catalpa is used for construction and finish work, and its durability in contact with the soil makes it a good choice for fence posts and rails. It burns well, too, and is sometimes used as fuel. The roots of this tree are highly poisonous.

Long, thin seedpods grow in the summer and turn brown and split open lengthwise in the late winter and early spring months, spreading the tree’s seeds. The “cigars” are abundant … and not pleasant to smoke.

Native Americans and pioneers used many parts of this tree medicinally. Catalpa bark was used to make an antiseptic tea, which was used as a snakebite antidote as well as in treating breathing problems. Flowers and seedpods have been used to make a light sedative, and leaves have been used as makeshift wound bindings.

Southern Catalpa is planted as an ornamental tree and is sometimes included in urban landscaped lawns for shade and for its showy spring flowers. Downsides to landscaping with this tree is that it can be considered invasive in some circumstances, and it litters the lawn with flowers in the spring, leaves in the fall and seed pods in the winter. When planting, it prefers moist, deep, well-drained soil, but this is an adaptable tree that can weather droughts and can handle partial shade as well as full sun. It’s best to plant it in an open field away from buildings, fences, septic systems and other structures that could be damaged as it grows.

The Southern Catalpa has played an important role in the lives of Southerners for generations, and if you like traditional plants, it may be make a good addition to your garden.

Some information for this article came from the Ladybird Johnson Wildflower Center; the United States Department of Agriculture Natural Resources Conservation Service and dengarden.com.