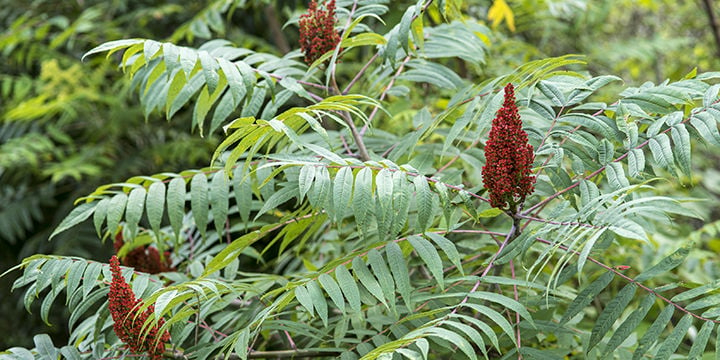 in a South American jungle. 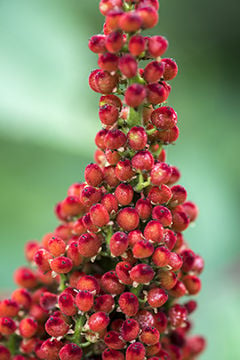 Only female plants produce drupes of the red berries.

in a South American jungle.

Only female plants produce drupes of the red berries.

Smooth Sumac is an ancient-looking shrub that, by appearances only, looks like it would be more at home in a South American jungle than in the understory of an Alabama pine forest; however, this showy All-American native is no jungle plant. In fact, it’s the only shrub found in all 48 lower U.S. states. It’s also native across Canada and in northeastern Mexico.

Smooth Sumac is beautiful in both form and color. It can grow up to 20 feet tall and has a long, leaning trunk or multiple trunks with grayish-brown bark and an open crown. Pinnate and compound, Smooth Sumac leaves are large, fern-like constructions with smooth green or purple stems supporting pairs of shiny, dark green, lance-shaped leaflets and a single terminal leaflet. Each leaf is between 1 and 1-1/2 feet long and contains 11 to 31 leaflets. Leaflets all have shallow, toothed edges.

In autumn, sumac leaves turn brilliant yellow, orange or red before they fall, and that’s when these plants, which grow in large colonies, really change the look of the forest.

The flowers of this plant are small with yellow petals packed in tight, upright clusters. They don’t stand out as much as the fruit that develops after each flower.

Sumac berries are red, round, small and hairy, but because they are in that tightly-packed, upright, pyramid-shaped cluster, called a drupe or a bob, the red vertical structures really stand out against the green horizontal leaves. Only female plants produce berries.

As a shrub or small tree, this plant is often found in the understory of forests, but it can handle full sun or partial sun as well. It doesn’t like wet feet but will grow well in most types of dry soil. It will also grow quickly after fires, on disturbed soil or on clear-cut tracts. It prefers slightly acidic soils – like the soil beneath pine trees – that are sandy, loamy or clay mixed with sand or loam.

Many colonies are formed from suckers of a single parent, and it is not uncommon for the entire colony to be composed of either all male or all female plants.

Smooth Sumac, Rhus Glabra, is one of four sumac species found in Alabama – along with Winged Sumac, Staghorn Sumac and Fragrant Sumac – according to the Alabama Plant Atlas of the University of West Alabama.

Staghorn Sumac looks very much like Smooth Sumac except that its branches are covered in hair like a deer antler in velvet. Winged Sumac is also similar-looking, but it has narrow, flattened leaf-like “wings” along its leaf stems, and it emits a watery sap.

There are about 15 species of sumac living in North America and about 35 different sumacs across the globe. Sumacs are also members of the larger family of plants, Anacardiaceae, which includes cashews, pistachios and mangos.

There are other closely-related plants growing in Alabama that give these sumacs a bad name: Poison Sumac. Poison Sumac, which is rare in Alabama, as well as Poison Ivy, which is not, and Poison Oak, are now members of the Toxicodendron genus, although at one time they were counted among the sumacs, and they are all still members of the same family. And by the way, some botanists classify Poison Sumac as the most toxic plant native to the U.S. There’s an easy way to tell Poison Sumac apart from the Rhus sumacs: The poison version produces only white berries.

Smooth Sumac and the other three Rhus red-berried sumacs native to Alabama not only are safe to touch, but also, they are edible.

Native Americans ate the peeled shoots of Smooth Sumac raw (they reportedly taste a lot like asparagus); soaked its berries in water to make a refreshing, lemonade-like drink the Cherokees called “Quallah;” and mixed its leaves with tobacco to smoke in pipes.

To make Quallah or Sumac-ade, as it is sometimes called, simply pick the ripe red drupes, soak them in cool water overnight, strain through cheesecloth or coffee filters and sweeten the red drink with sugar to taste. It is said to be a real thirst quencher over ice on a hot day.

One word of caution: a few people who have extreme allergies to poison ivy may have a reaction to consuming any sumac, so if you count yourself among that crowd, sip and wait before you quaff Quallah.

Sumac berries steeped in water also have been used to treat a number of medical problems, including diarrhea when taken internally; to make a wash for sores and as a body wash. Sumac leaves and roots also are used to make natural medicines to treat colds, fevers, sore throats and a number of other issues.

Sumac is one of the most useful native plants for making fabric dies and for tanning leathers. Sumac leaves collected in fall are used to make a rich brown dye. Berries can be used to make red or black dyes, too. A black dye is made from the plant’s roots, leaves and bark. The roots alone are used to make a yellow, gold or orange dye.

Many types of birds and mammals depend on sumac as a winter food supply.

Some information for this article came from the Lady Bird Johnson Wildflower Center, the Alabama Cooperative Extension System, the United States Forest Service and www.eattheweeds.com.