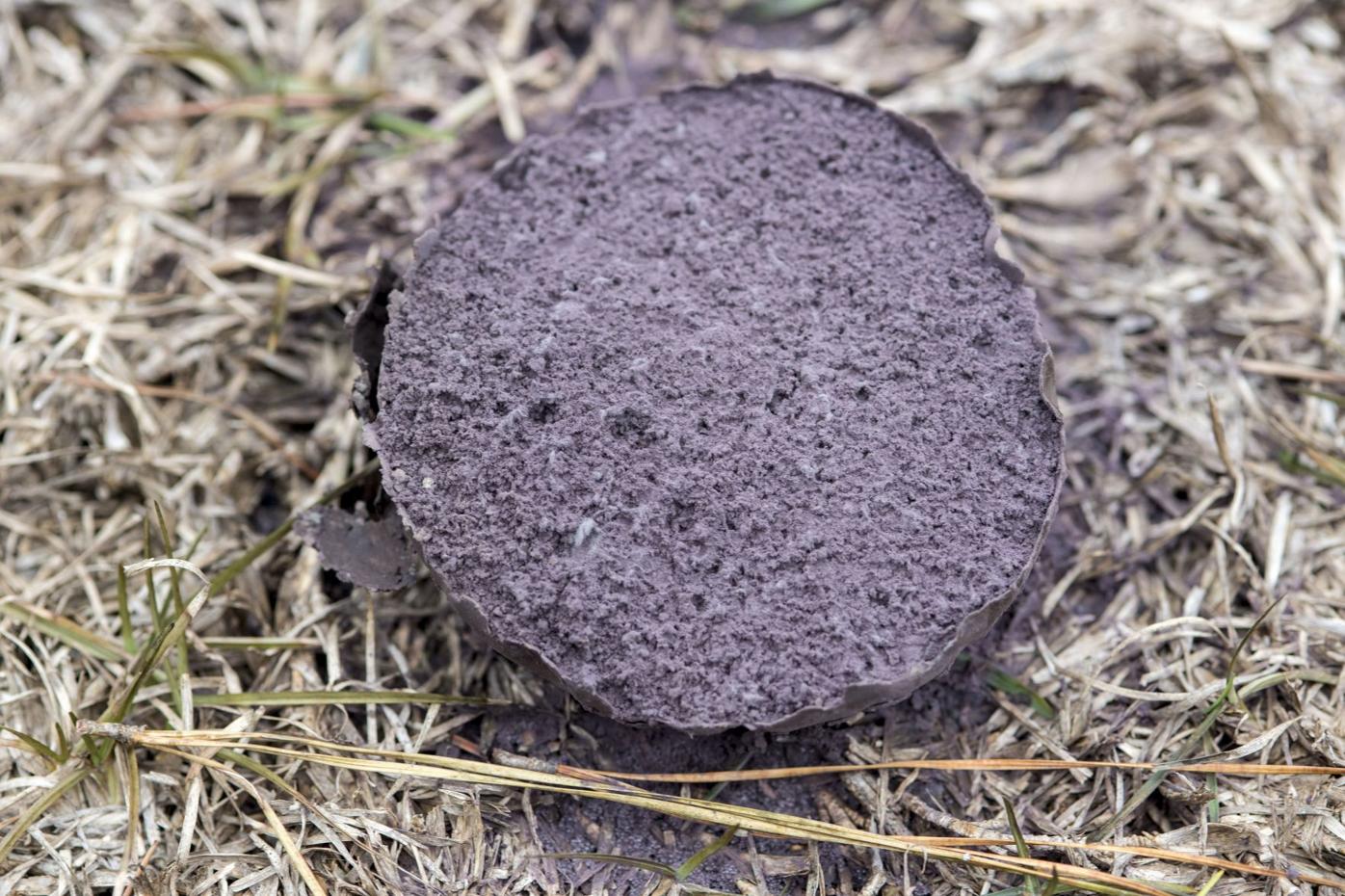 After it's dried the white flesh morphs into spores, like this one that is a purple spore puffball. 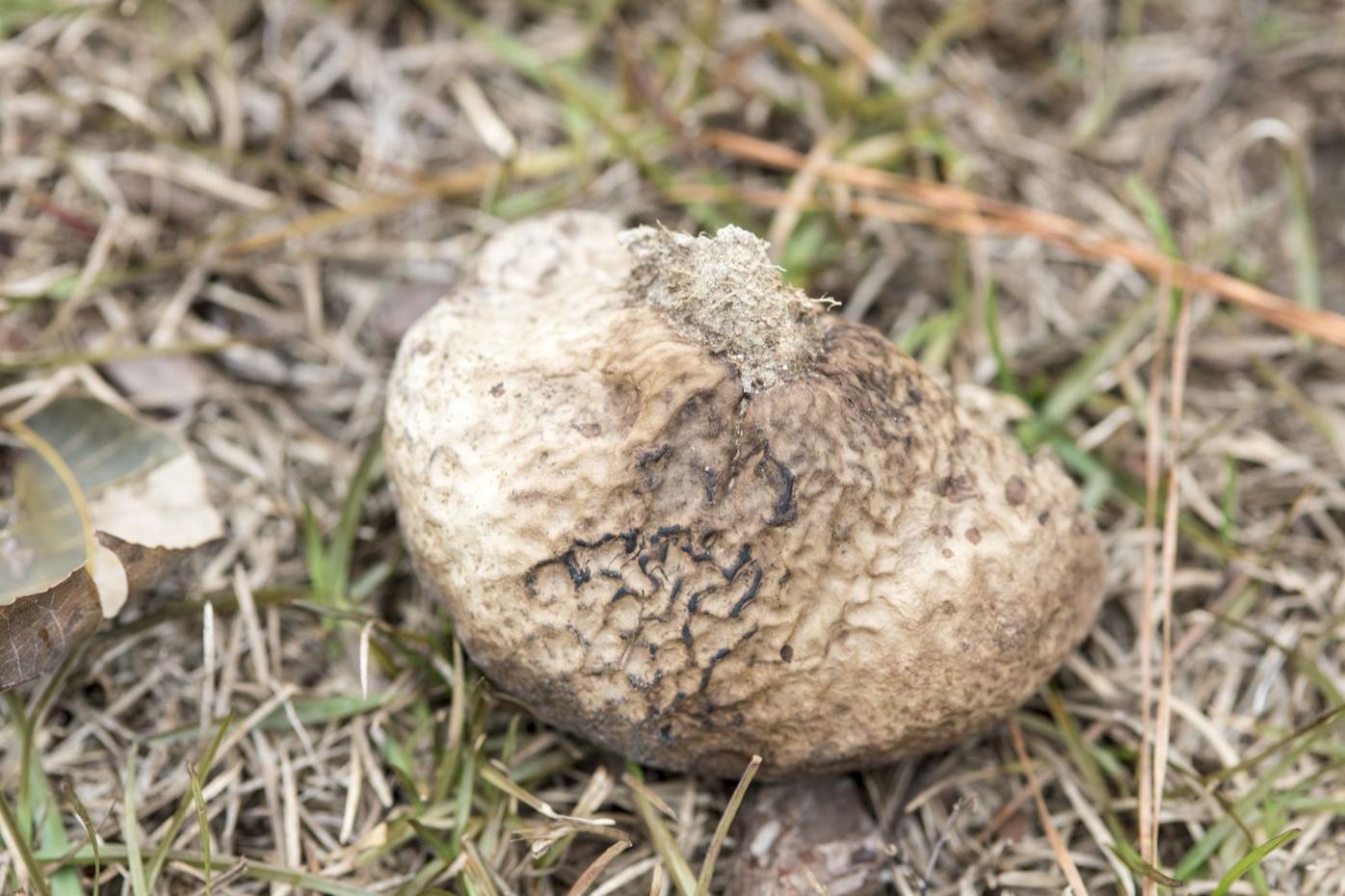 The underside of a puffball where it attaches to the earth. 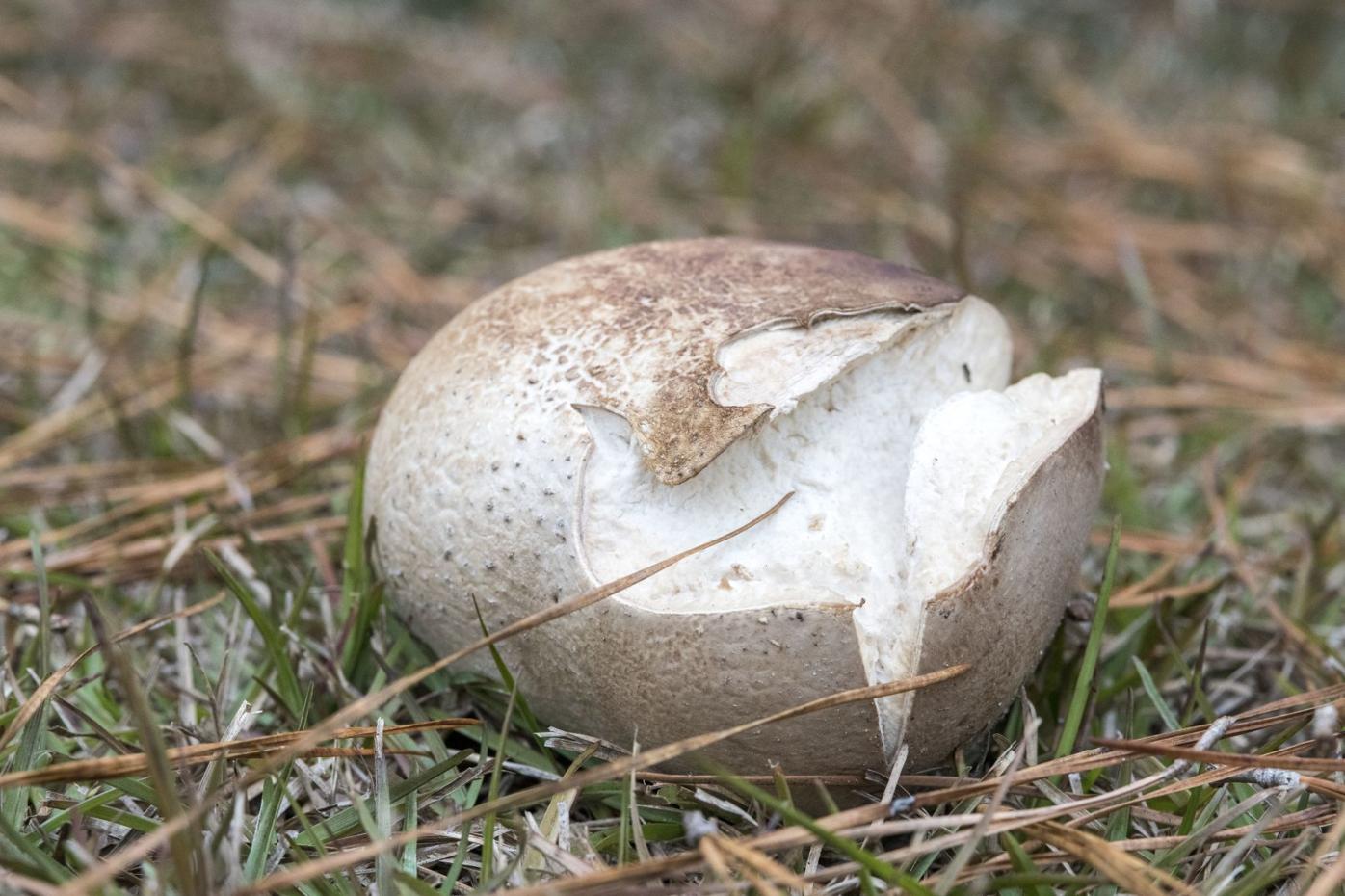 The puffball splits to show the solid white interior. 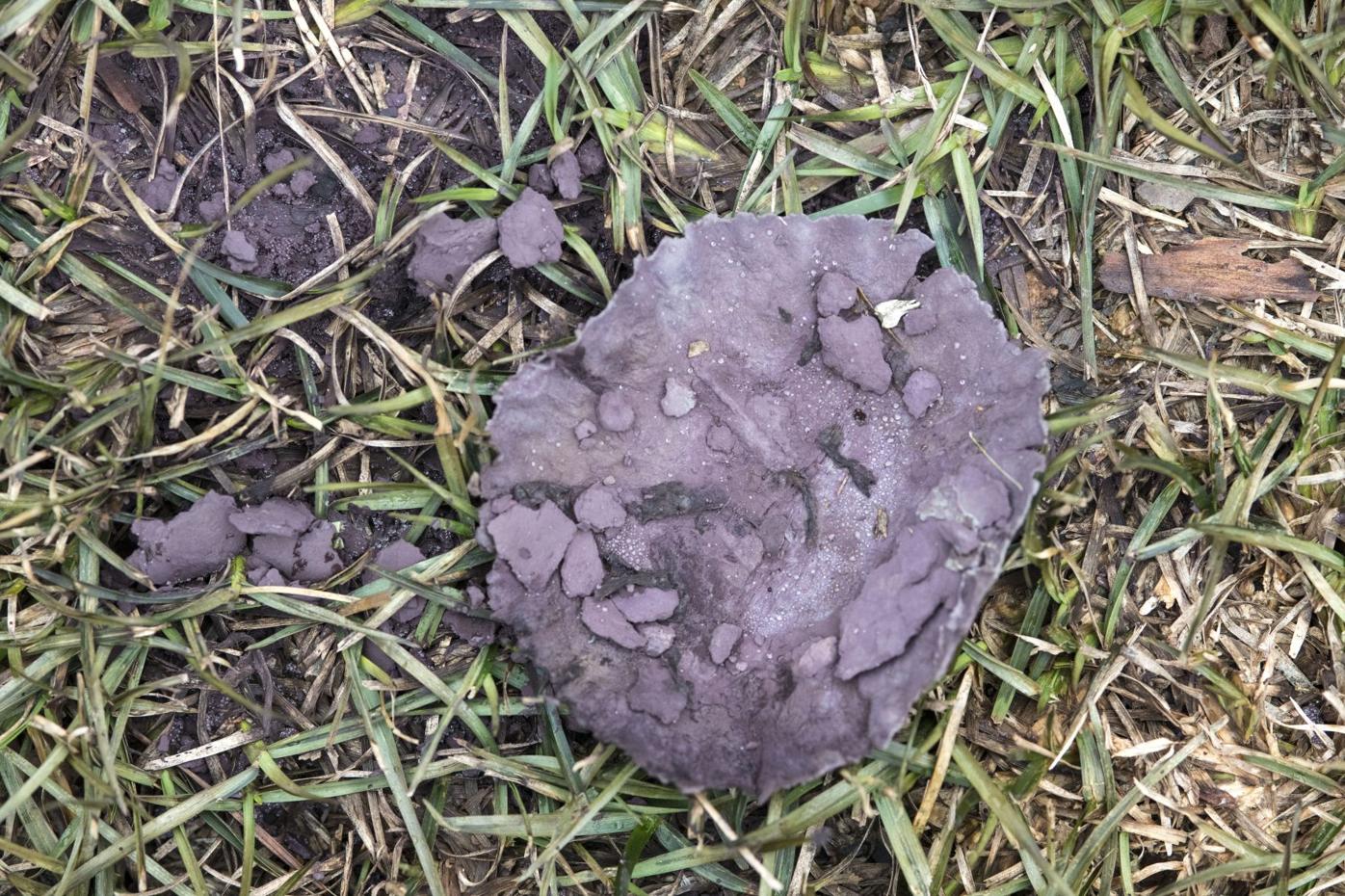 Once the spores have dispersed all that's left is a dark hull on the ground. 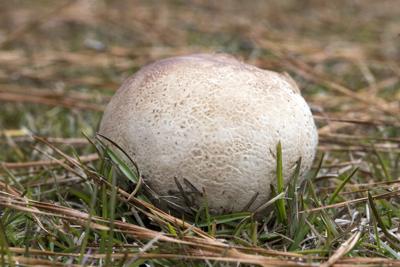 After it's dried the white flesh morphs into spores, like this one that is a purple spore puffball.

The underside of a puffball where it attaches to the earth.

The puffball splits to show the solid white interior.

Once the spores have dispersed all that's left is a dark hull on the ground.

One day it rains, and the next day – POOF! – white puffballs appear, like magic, on the lawn.

Or in the woods.

Or on the roadsides.

“Puffball” is a common name for mushrooms that fall into three scientific genera, or groups of closely related species. Scientific names are made of two different words, the genus and species names. Mushrooms with the “first” name of Calvatia, Calbovista and Lycoperdon are all commonly called puffballs.

It’s a good name, because these mushrooms are all roughly ball-shaped, fully-enclosed mushrooms. Most mushrooms have caps with gills underneath, where spores live, and stems that raise the caps off the ground. Puffballs are the exception, as they have very little or no stems at all, though some have stalks or more elongated structures on their undersides. Many seem to sit right on the ground. Also, puffballs have no gills, just a round shape with spores on the inside.

The way puffballs spread their spores is also part of their appropriate common name: As the mushroom dries, it splits or develops an opening and the interior changes color as its flesh transforms into spores. Stepping on or kicking an older puffball will release a cloud of spores – a dramatic display very often gleefully caused by active children. Once the puffball is dry, wind and raindrops and falling objects hitting the mushroom will also puff out a cloud of spores tht float on the breeze away from the parent mushroom and settle on the ground.

The puffballs pictured in this article, which where photographed in a field near Lake Martin, are called Purple-spored Puffballs, or Calvatia cyathiformis. This puffball firmly attaches to the ground and grows larger than a grapefruit.

A closely related species, the Giant Puffball, is also found in our neck of the woods. It is a white ball-shaped mushroom that can grow up to 2 feet or more across. A whopper like that could contain up to 7 billion spores. Giant Puffballs are only barely attached to the ground and can usually be rolled off their bases.

There are many other puffballs found in North America, including some that are covered in spikes or have more pronounced thick stalks on the bottom.

Many puffball mushrooms are edible when young – when the interior is all white and marshmallow-soft – and depending on whom you ask, they can range from kind of bland to very tasty with an earthy flavor.

However, there are two deadly poisonous mushrooms that can look like puffballs during part of their growth cycles: the Destroying Angel mushroom and the Death Cap mushroom. Paying attention to their common names, it’s pretty obvious that neither should ever touch a skillet. Both will likely cause death within 24 hours after eating, and this group of mushrooms causes about 90 percent of all mushroom fatalities.

Distinguishing between these edible and poisonous mushrooms is easy, but you have to cut the mushrooms in half, from top to bottom. Edible puffballs are pure white inside: They look like mozzarella balls cut in half or marshmallows cut in half, with no color and no pattern whatsoever inside, according to EatThePlanet.com.

“Not all puffballs are edible, and not all are edible at all stages, but if you stick to the rule of all white on the inside with no markings (especially gills) then you will only be eating edible puffballs,” according to the website.

Many other sources give exactly the same advice, but it’s always good to check with a local expert to identify mushrooms before eating them. A second bit of advice: look up photos of Destroying Angel and Death Cap mushrooms cut in half so you will know exactly what their internal patterns look like – if you see any gills or what looks like a mushroom stem and cap imbedded inside hard white flesh, throw it away immediately.

It’s also safer to choose only puffballs larger than your fist if you are going to eat them.

Once you’re sure you have an edible puffball, you can cook it alone or use it as you would eggplant in parmigiana, in place of lasagna pasta or even in an Asian stir-fried dish where it is used like tofu. It’s best to simply brush dirt off the mushroom instead of washing it because the sponge-like interior can become waterlogged and soggy. But if you are worried about eating dirty mushrooms, it is possible to peel the thin outer skin before cooking. To prepare them, cut in slices from top to bottom, about the thickness of a slice of bread. Puffballs are good grilled, baked, boiled or sautéed in butter, though sautéing is probably the most popular method. The slices will soak up whatever you cook them in, so use butter sparingly.

Besides being edible, these mushrooms have a number of uses. Medical scientists are currently investigating puffballs in the genus Calvatia because they have been shown to prevent some types of tumors. For years, puffballs have been used as a styptic to stop bleeding and to dress wounds − both powdered and slices of the mushroom.

Puffballs can be used to dye fabrics and paper when used in combination with ammonia (as a mordant). Purple-spored Puffballs create a rusty red color while Giant Puffballs make a more reddish-brown dye.

And they can entertain fast-footed children like no other mushroom.