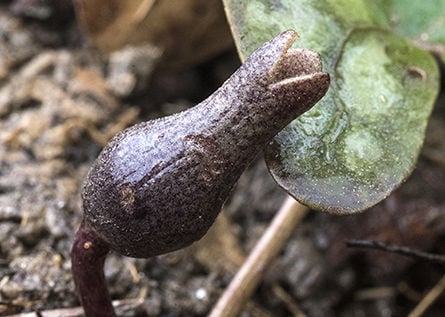 The purple bud of the Heartleaf plant resembles a little brown jug upon opening. 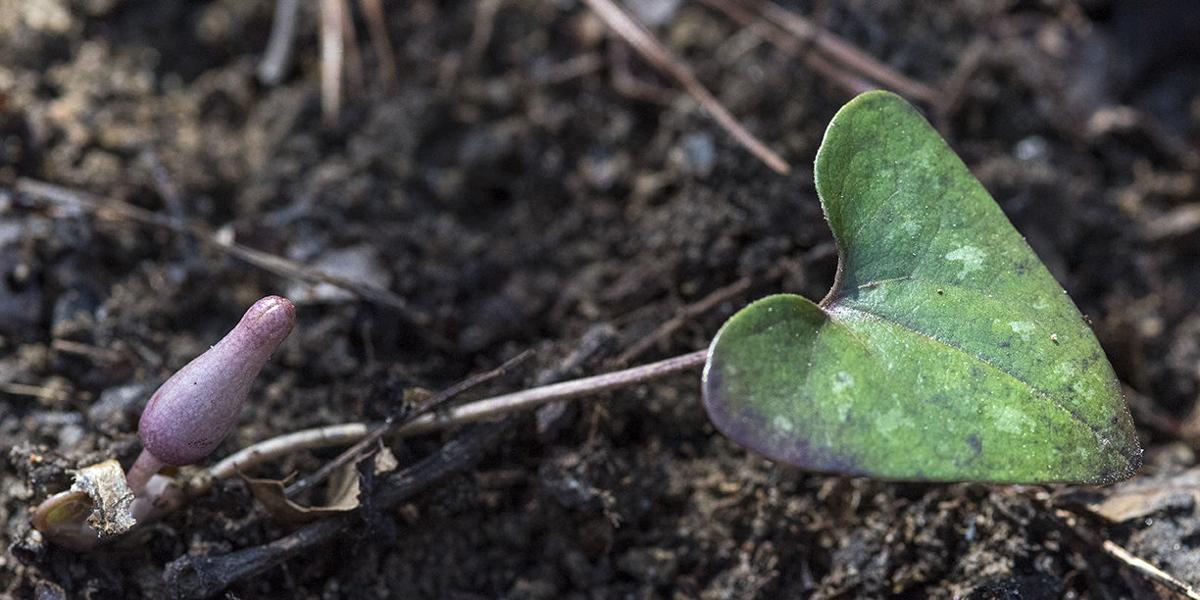 With its heart-shaped leaves, the name of this plant is easy to remember.

The purple bud of the Heartleaf plant resembles a little brown jug upon opening.

With its heart-shaped leaves, the name of this plant is easy to remember.

What’s in a name?

It’s the same plant, with a trio of very different common names. And honestly, one is very helpful; one is useful upon close examination; and the third isn’t either.

Hexastylis arifolia – the scientific name for this Alabama native – is a beautiful, evergreen, groundcover-type plant found in shady, moist woods and around forests that border water.

Heartleaf is the most telling common name for those trying to identify this plant. That’s because Hexastylis arifolia has beautiful green leaves shaped like hearts or arrowheads. These leaves are easy to spot in the winter months against all the browns on the forest floor – at least they were this year with our mild winter.

During cold winters, the Heartleaf leaves can turn brown-green-gray with frostbite, but as the weather warms most leaves will be green.

The leaves are relatively large for a groundcover plant, 3 inches to 8 inches long. They usually don’t stand taller than 4 inches off the ground, and they are supported by long, bendy purplish petioles (“leaf stems”) that snake up through the leaves from the rootstock.

The deep green leaves are mottled with lighter green or cream-colored patches in patterns that can look like something you’d see projected behind a late 60s psychedelic rock band. Some leaves have very faded patterns; others are distinct.

When this plant blossoms in the early spring, its unique flowers do look like little brown jugs, especially those distinctively-shaped amphora jugs used to store wine around the Mediterranean Sea.

These jug-shaped blossoms can appear light greenish, or whitish, or purplish or pinkish, depending on how much sun they are getting and what time you see them, but as they mature the flowers grow more brown or maroon. The problem is that since this plant blooms in the spring, its flowers are often buried underneath the leaf litter. So to see the little brown jugs, you often have to bend down and rake away the dried, brown leaves of winter.

Each flower is solitary, rather thick and leathery and has a mouth formed by three triangle-shaped spreading lobes.

The Wild Ginger name comes from the fact that all parts of this plant smell something like ginger. Some people think it’s more of a licorice scent. Personally, I think it has a lot in common with sassafras. But in any case, it is a strong-smelling plant. Biologists think the odor helps to repel insects.

It should be pointed out that Hexastylis arifolia is not related to the ginger that Buffalo Rock buys by the truckload. This ginger is not edible. In fact, it’s toxic.

So this “ginger” nickname could get neophyte foragers in trouble.

Heartleaf is a plant that can be found where the soil is moist and rich but well-drained, like ravine slopes and low, flat forests and near streams, lakes or ponds. In areas where conditions are ideal, these plants can produce a cluster of big, showy leaves. In less favorable environments, the Heartleaf is more likely to send up fewer leaves, maybe just one or two.

Heartleaf is a slow-growing plant. While it is common in the right setting, Heartleaf is usually found spread over the forest floor with plenty of space between each individual plant. It is often seen near another groundcover plant with green mottled leaves that shows up around Lake Martin in early spring: trillium.

Because of its attractive leaves and unique flowers, Heartleaf is a popular choice for a shady wildflower garden. You can sometimes find this plant for sale in nurseries, but you can also transplant it from the woods. Be aware that its feeder roots are fleshy, and a transplanted plant may droop and look tired for a while. Make sure it stays moist until it recovers.

Heartleaf is native to the Southeastern U.S., from Mississippi to Florida and north to Kentucky and Virginia. Throughout the world, plants called “wild ginger” number about 80, with 65 species found in Asia and 15 species found in North America. All are members of two genera: Asarum and Hexastylis, and there is some controversy among taxonomists concerning these plants.

Despite the toxic nature of its roots, Heartleaf has been used by Native Americans as a medicinal herb in the past, and in Asia, other wild gingers are still used as a home remedy and a weight loss aid; however, modern chemical analysis of the plant has shown it contains aristolochic acid, which can permanently damage or even shut down the kidneys. This chemical is so worrisome that the Food and Drug Administration has banned all importation of products containing aristolochic acid into the U.S.

So it’s best to just forget that common name “Wild Ginger” and stick with “Heartleaf” to recognize this plant in the forest and “Little Brown Jug” to confirm your identification.

Some information for this article came from the Georgia Native Plant Society, the Ladybird Johnson Wildflower Center, Nature’s Poisons and from the Alabama Plant Atlas.