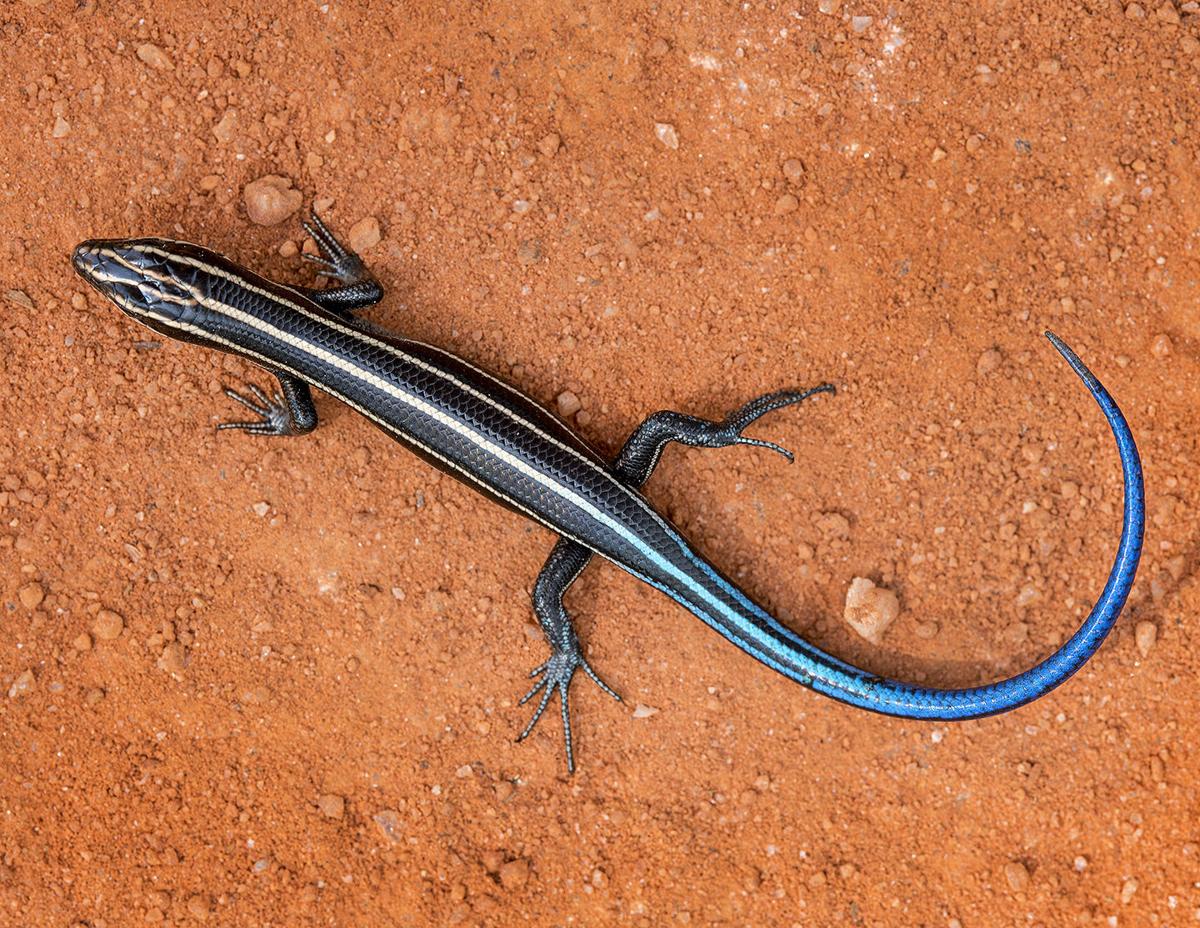 Five-Lined Skinks like this one are harmless to humans.

This native lizard is named for the five buff, white or yellowish lines that run the length of its body.

Five-Lined Skinks like this one are harmless to humans.

This native lizard is named for the five buff, white or yellowish lines that run the length of its body.

If you spend much time gardening or walking on a wooded path or visiting the woodpile, you probably already know the Common Five-Lined Skink.

They are easy to spot during the warm months, and their brilliant blue tails stand out in almost every setting … except maybe a patch of blue hydrangeas.

Actually, you’ll probably hear this creature before you see it. Take a step too close to one, and you’ll hear lightning-fast scaly toes racing through the leaves for cover.

In early April, I was surprised to see a swarm of termites taking flight from a log … and I was happy to see a big blue-tailed skink perched atop the same log with gossamer termite wings sticking out of both sides of its mouth. It’s a shame he couldn’t consume the entire swarm.

Five-Lined Skinks do have an unfortunate nickname: “Scorpion.” Let’s get this out of the way once and for all – there are no poisonous lizards native to the Southeastern United States. That blue tail is not a “stinger.” There is one (and only one poisonous American lizard) that lives in the American West, but you’re not going to see any Gila Monsters walking around the woods near Lake Martin.

The Five-Lined Skink’s primary defense mechanisms are its four fast feet. If you are quick enough to catch a big skink, you might get nipped on the hand. While it may be a bit painful, it’s extremely unlikely you’ll need medical attention from a skink bite. Finally, like other lizards, if a predator does manage to grab a five-liner by the tail, the tail will break off and continue twitching, which creates quite a distraction while allowing the main body of the skink to scramble away.

Five-Lined Skinks are well-named because they have – you guessed it – five white, buff, orange or yellowish lines that run the length of their bodies, from their heads all the way to past the base of their tails.

Young five-liners have brilliant blue tails, which darken as the lizards mature. The females keep their racing stripes for life. As the males mature, their stripes fade or even disappear during the spring breeding season, when they also develop orange or red heads.

The scientific name for Five-Lined Skinks is Plesidon fasciatus. Plesidon is Greek for “most teeth” (remember the nip) and “stripe.”

There are two similar-looking skinks living in the Lake Martin area, the Southeastern Five-Lined Skink, which is rare, and the Broad-Headed Skink, which is larger. Both lack the Common Five-Liner’s row of enlarged scales found under the base of its tail.

By the way, the word “skink” applies to lizards in the more-difficult-to-pronounce family Scincidae and the infraorder Scincomorpha that are distinguished by having no neck and smallish legs for their size. If you see a lizard without any shoulders, it’s probably a skink.

The Common Five-Liners can grow up to 8-1/2 inches long, and like all cold-blooded reptiles, they are active as long as the weather is warm.

These lizards spend most of their time eating crawlies like spiders, crickets, beetles, snails, various larvae, roaches, wasps, termites and grasshoppers. They prefer moist areas near lakes, creeks and swamps and are usually seen around rotting wood, sawdust and rock piles, which is where their prey lives.

Common Five-Lined Skinks are native to most of the U.S., from Florida to New England and from eastern Texas to southern Wisconsin. They are common throughout Alabama.

During this time of year, these skinks are nesting. Skink moms lay up to 18 whitish eggs in a moist, covered place, such as under a log or in a rock pile. She spends up to two months in the area, watching over the eggs while they incubate and looking after the baby skinks until after they hatch.

Back to that “scorpion” name – there is some question whether the blue-tailed young skinks are poisonous, not to people but to cats. Some veterinarians and scientists think that it is possible that the lizard’s bright blue tail is a toxicity warning sign, which is often the case among other brightly colored creatures, like the poison-arrow frogs found in Central and South America. Some cats that have eaten young Five-Lined Skinks have shown serious symptoms, including loss of balance, paralysis and death. So if your cat likes to chase lizards, you might want to keep that in mind.

These skinks can live up to 10 years in captivity, though half that is probably more common in the wild, where predators, including raccoons, opossums, crows, snakes and house cats, are on the prowl.