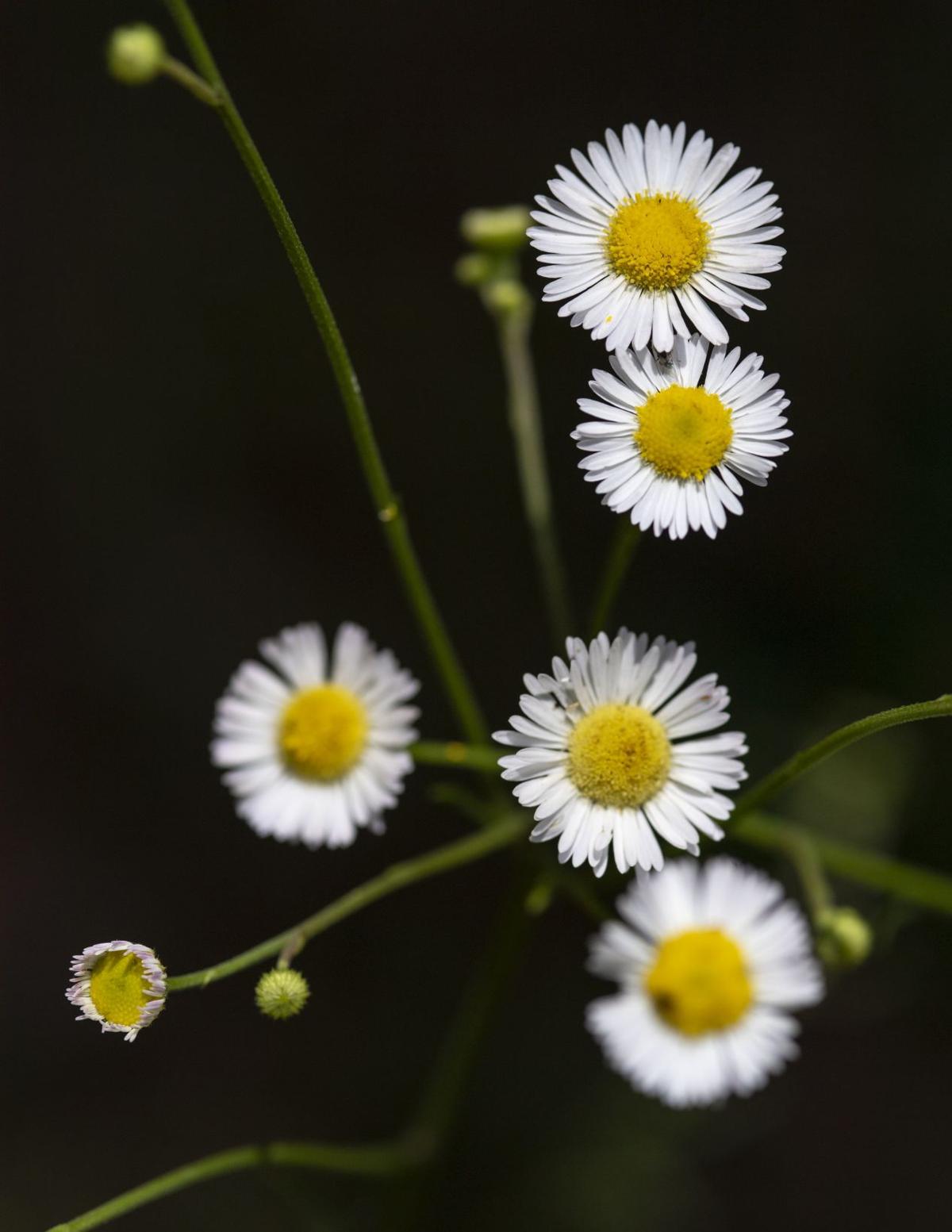 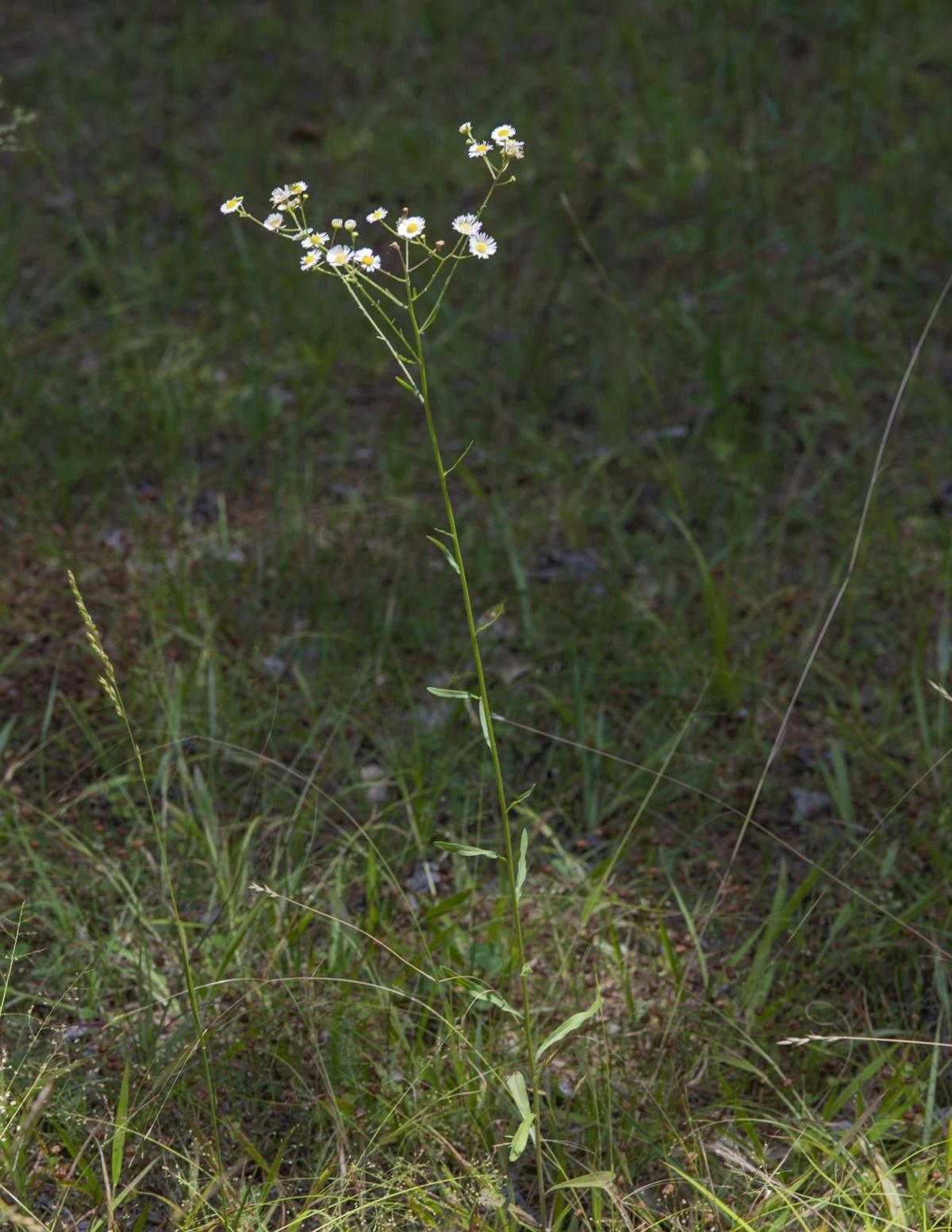 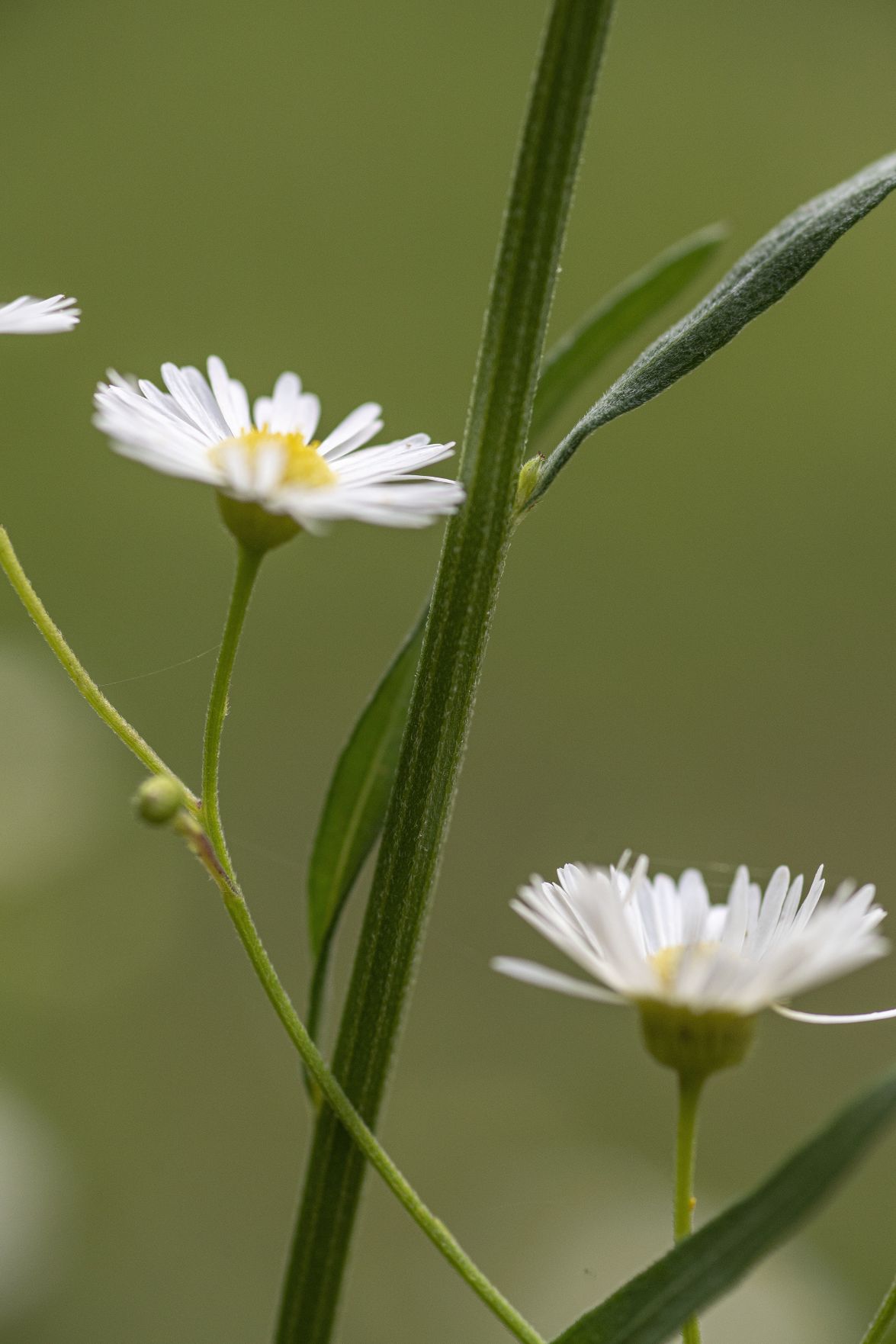 Daisy Fleabane, a beautiful little white wildflower with an unfortunate name, pops up along roadsides and in fields all around Lake Martin this time of year.

Its tiny white flowers are the width of a pinky fingernail, about half an inch or a touch wider in diameter, but they make up for their miniature size with an amazing number of thin, white “petals” – between 40 and 120 on each blossom.

Daisy Fleabane grows 1 foot to 4 feet tall on long, green, hairy stems. Its leaves are in two forms. The basal leaves closest to the ground are very narrow near the stem and much wider toward the end, a shape that looks something like a spoon, with tiny teeth along their edges. The thin, lance-shaped leaves on the upper stem are sparse and alternate, meaning they emerge individually and spiral up the stem. They may have teeth, especially lower on the stem, but as they go up the stem, they tend have smooth edges.

Daisy Fleabane flowers have thin, tiny “petals” (actually sterile ray flowers) that are mostly white, though some may have a pale lavender tint. The bright yellow, flat centers are very small, fertile disk flowers that produce nectar and seeds. The flower heads form in loose clusters on stalks at the top and upper sides of the stem. When viewed from a distance, the flowers seem to float in the breeze like white polka dots above a green roadside.

This fleabane has a fibrous root system that sometimes develops a taproot.

The scientific name for Daisy Fleabane is Erigeron annuus, and it was named by the famous Swedish botanist Carl Linnaeus, who developed the modern scientific naming system of species. “Erigeron” is derived from the Greek words for “early” and “old man,” referring to its time of blooming and the hairy or wooly look of its whitish seed heads, which can look like a gray-haired man. “Annuus” – think annual – is a reference to the one-year lifespan of this plant, though it can sometimes live for two years.

Daisy Fleabane is sometimes called Eastern Daisy Fleabane or Annual Fleabane. The common family name “Fleabane” – the combination of two words that are not high in anybody’s warm and fuzzy vocabulary – refers to the widespread, unproven superstition that these dried plants repel fleas.

The leaves of this plant are edible in salads, but because they are hairy, their texture keeps them out of most people’s kitchens. If you would like to try to eat these leaves, it’s best to mix them with other salad leaves.

Some people also make a tea from the dried leaves and petals.

Daisy Fleabane is an early colonizer or pioneer species, meaning that it is among the first plants to grow in disturbed soils. Since people tend to disturb soil by making roads and clearing fields, this is a plant that is often found where people live.

It grows well in full sun and partially shaded areas with good moisture and can live in soil that is not particularly fertile, like red clay and rocky soils, which is perfect for the Lake Martin area. It can grow in most soils but competes best in areas that are not very fertile.

Daisy Fleabane is native throughout the Eastern U.S. and much of the West. It is found in 43 of the 48 U.S. states.

Many insects pollinate Daisy Fleabane, including a number of native bees, like carpenter bees, and flies, as well as wasps and butterflies and other insects. Animals that will eat this plant include rabbits and some livestock animals, especially when the plant is young.

For those who like wildflower bouquets, Daisy Fleabane will last several days in a vase before wilting.

There are lizard’s tails.