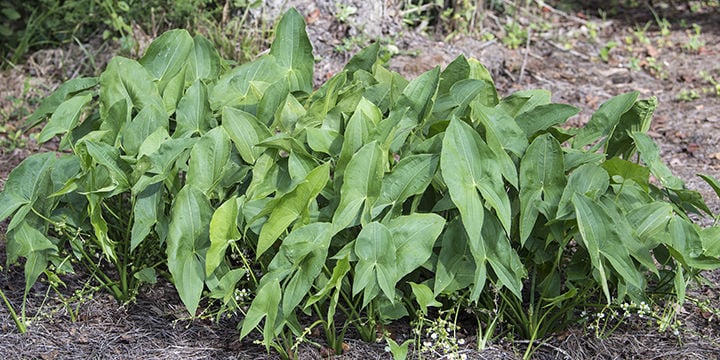 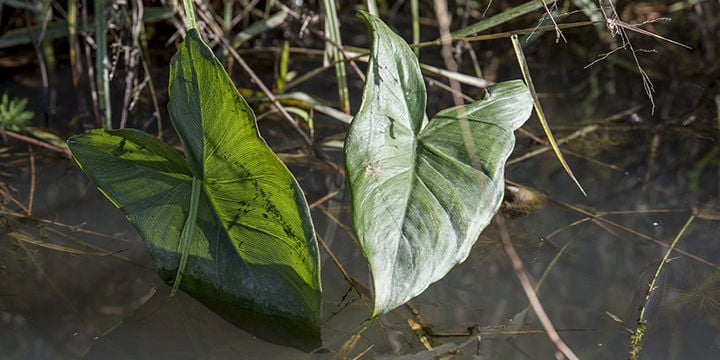 The veins on the leaf of the toxic Arrow Arum generate from a center stem vein. Photo by Kenneth Boone 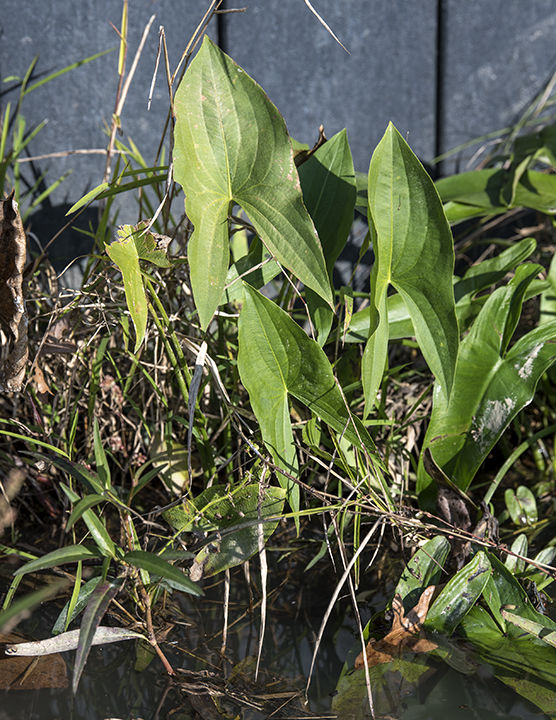 The veins on a Broadleaf Arrowhead generate from the center of the leaf, which distinguishes it from a similar but toxic plant. Photo by Kenneth Boone

The veins on the leaf of the toxic Arrow Arum generate from a center stem vein. Photo by Kenneth Boone

The veins on a Broadleaf Arrowhead generate from the center of the leaf, which distinguishes it from a similar but toxic plant. Photo by Kenneth Boone

Broadleaf Arrowhead is a pretty wetlands plant you ought to know about.

It produces starchy edible tubers, which native Americans used as a staple … and it’s also called Duck Potato or Indian Potato because that’s kind of what it tastes like.

Fall is the best time of year to collect this wild food, which can be eaten raw (they’re bitter but edible) or boiled or roasted (much more tasty and described as a cross between a potato and a chestnut). The tubers can also be dried and ground up to make a bread.

This plant is known to the scientific community as Sagittaria latifolia, which comes from the Latin words for arrow and broad-leaved. It is also known as Wapato (wah-puh-toe), a Native American name.

Broadleaf Arrowhead is endemic to Canada and the contiguous United States, Mexico, Central America and the northern part of South America. People have transplanted it to many other parts of the world where it now grows wild, including Europe, Australia, Russia, Hawaii and even Bhutan.

This plant can grow in either wet soil or in the water. In the water, it can be up to 6 feet tall and can stand up to 3 feet above the surface. Its arrowhead-shaped leaves are its most distinguishing characteristic. Each dark green leaf is attached to the end of a single thick stalk. The leaves themselves have many uniform veins that originate where the stalk attaches and radiate out to the rest of the leaf in a curving fashion. Broadleaf Arrowhead has white flowers with three petals on a thick stalk with no leaf on it. Its white, starch-filled tubers are covered with a purplish skin.

This plant grows alone or in colonies, and it is usually found along the shoreline – both in the wet soil and in the water – on rivers, ponds and lakes. In Lake Martin, you will likely find them in marshy areas in the back of sloughs and along the shores of creeks flowing into the lake.

Broadleaf Arrowhead has played a major role in feeding people in the Americas for thousands of years, but one of the more interesting accounts is how it became a primary food for the Lewis and Clark expedition in the early 1800s.

According to the explorers’ journal, on Oct. 22, 1805, Meriwether Lewis fell behind the expedition to investigate Wapato roots that were being dug by natives in “great quantities in the bottoms” of the Deschutes River in what is now Washington State.

The explorers first tasted Wapato on Nov. 4, 1805, when it was roasted in their fire’s coals. Clark said it reminded him of “a small Irish potato.”

According to the journal, Lewis and Clark named an island in the Columbia River “Wappetoe Island” after this tuber. The island is now known as Sauvie Island, and it is located in Multnomah County, Oregon.

In the March 29 entry, Clark described Native American women gathering the Wapato “by getting into the water, Sometimes to their necks holding by a Small canoe and with their feet loosen the wappato or bulb of the root from the bottom from the Fibers, and it imedeately rises to the top of the water, they Collect & throw them into the Canoe, those deep roots are the largest and the best roots.”

This became a staple of the expedition; in fact in Oregon, Broadleaf Arrowhead “potatoes” and elk made up the explorers’ everyday meals. The expedition’s famous native guide, Sacagawea, told Clark she suggested they overwinter anywhere there was “plenty of Potas.”

If you’d like to try these round tubers, the best way to dig them is the same way the Native Americans did. Once you break them loose with your feet (or if you don’t like mud between your toes, try a stick or pitchfork), they will float. To prepare the tubers, cut off the sprout and boil or roast them for 30 minutes; then, peel and use them just like a potato. The young leaves, stalks and flowers of this plant also are edible.

Before you take your shoes off and start rooting around in the mud for dinner, you need to know that there is a very similar-looking plant growing here that can be toxic, Arrow Arum. A major difference between the two plants is that Arum leaves have three primary veins in each of the leaf’s three lobes, but the most prominent is the one that goes to the point of the arrowhead. Secondary veins may be very small and barely visible, and they branch off all along the length of the primary veins. Also, Arum has very different, yellow flowers that are packed along a sheathed spike – at a quick glance, it looks something like a tiny ear of corn.

Arrow Arum is both toxic and edible. Eaten raw, it produces a burning sensation within about a minute of putting it in your mouth, and it can be dangerous or even fatal if swallowed; however, long cooking times – like all day – can make this look-alike edible and results in another excellent source of starch that was eaten regularly by Native Americans.

Some information for this article came from www.lewis-clark.org, www.eattheweeds.com and The Field Guide to Aquatic Plants of Alabama prepared by the Alabama Department of Conservation and Natural Resources.