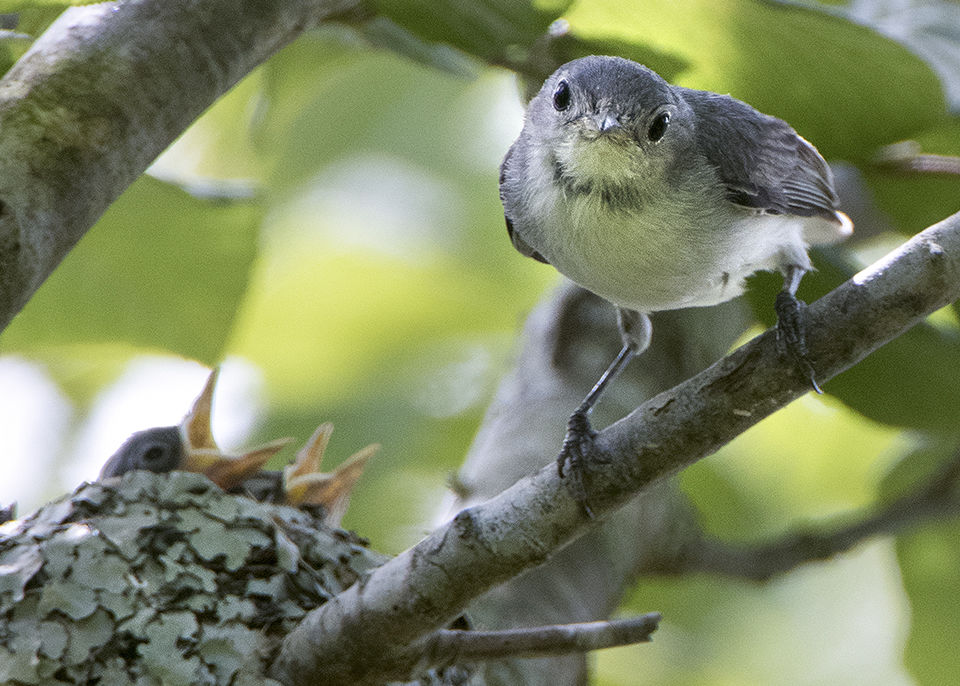 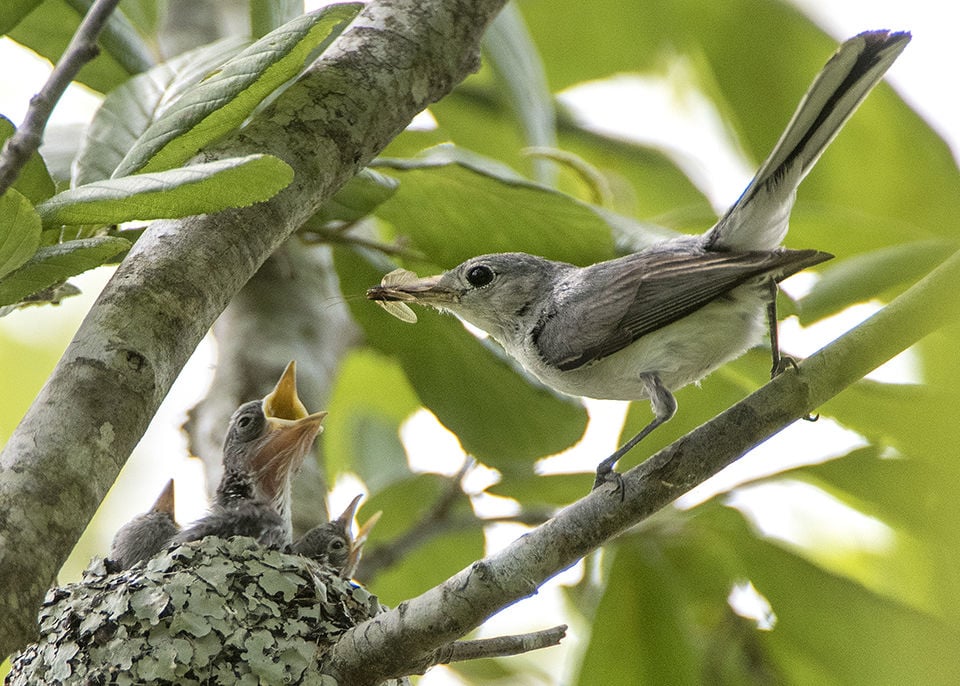 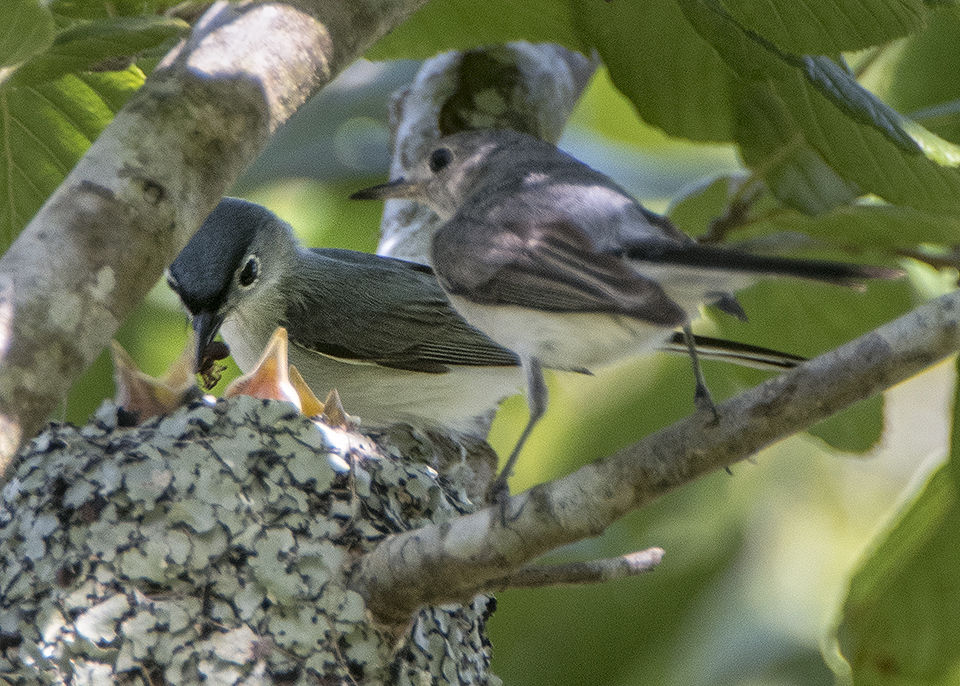 The male gnatcatcher's eyebrow is more pronounced than the female's.

The male gnatcatcher's eyebrow is more pronounced than the female's.

Often known as the “little mockingbird,” the Blue-gray Gnatcatcher is a bird that does look like a tiny version of a mockingbird, but it moves much faster.

This gnatcatcher is very small, roughly 4 inches long, with a 6-inch wingspan, weighing about a quarter of an ounce. It’s so small and so quick that, in flight, it’s not unusual to think you’re seeing a hummingbird.

But if you can catch one holding still for a few seconds, it’s quite obvious that this is no hummer. Blue-gray Gnatcatchers have a mockingbird-like silhouette and a long, black tail with white edges that they often flick to scare up insects for dinner. They sometimes hold their tails very high in the air in a very un-mockingbird-like position.

But in many ways, they do deserve their “little mockingbird” nickname. They sometimes mimic other birds’ calls. And they are colored and shaped (but not sized) much like a mockingbird.

Blue-gray Gnatcatchers are – aptly so – blue-gray in color with lighter grayish-white bellies. Males tend to be more bluish than their grayer partners. These tiny songbirds have white rings around their eyes – the males’ eye rings are more obvious – long gray legs and a short, straight bill.

During the warm months when they are breeding, male Blue-gray Gnatcatchers have a dark, V-shaped “eyebrow” marking that makes them look like an Angry Birds cartoon character.

Blue-gray Gnatcatchers live all across the U.S., from the East Coast to the West and south to Central and South America. They do not live in the Upper Midwest or the northwest corner of the U.S.

You’re likely to see Blue-gray Gnatcatchers around the edge of Lake Martin and other bodies of water, as they usually build their nests in moist areas around gaps and along edges of hardwood forests. They seem especially fond of oak, ash and maple forests across their range, and here in the South, they tend to like pine forests with oak understories. The Blue-gray Gnatcatcher pictured here raised its family in alder bush right on the shoreline.

Both male and female work to create a small, flexible, high-walled nest, which is made of bits of lichen and spider silk, as well as strips of bark and grass. The inside of the nest is roughly 1-1/2 inches in diameter and is lined with soft material, such as feathers, paper and hair. A breeding pair can be very prolific, building multiple nests in one season to thwart mites and parasites. They can also be quite practical, pirating parts of old nests to build new ones in order to save time and labor.

Nests are usually built in the upper branches of a tree, mostly away from the main trunk. Nest sites are often on top of a horizontal branch, or sometimes in the crotch of a branch for support.

Blue-gray Gnatcatchers are extremely energetic and busy. After the first nest is complete, the male will often start work on the second while his partner is sitting on eggs; however, the male also hunts bugs to feed the family and will sit on eggs to give his partner a break.

Blue-gray Gnatcatcher gals lay three to five 1/2-inch-long pale blue eggs with brown spots and incubate them for about two weeks. Once the nestlings hatch, they will be ready to leave the nest in another two weeks. Juveniles’ feathers come in more gray-green colored than their parents.

These birds are always in motion. When scavenging for food, they dart and flit from tree to tree, cocking their heads and twitching their tails to startle insects into moving. Interestingly, they don’t eat a lot of gnats, but they do eat plenty of other insects – like spiders, beetles, cicadas, moths, butterflies, flies and ants – that they pluck from a branch or leaf or from mid-air. A large captured insect may be beaten into submission on a branch before it is eaten.

Gnatcatchers are as feisty as they are quick, vigorously defending their nests and territories. They are known to attack much larger birds that come too close, sometimes with both male and female working together to chase off an invader. They have been known to stage aerial face-offs with interlopers, flying up into the sky breast-to-breast while trying to peck each other like two angry baseball players arguing at home plate.

These birds are not long-lived. The oldest Blue-gray Gnatcatcher known to science is 4 years and 2 months old. Most adults are hard for predators to catch; however, young gnatcatchers are preyed upon by a number of birds, including bluejays, crows and woodpeckers, as well as squirrels, raccoons and snakes.

Here in the Lake Martin area, Blue-gray Gnatcatchers are summer residents, even though they live full time in south Alabama; however, as the climate has warmed over the past century, these birds have expanded and moved their range north about 200 miles, so it wouldn’t be super unusual to see one here now during the winter months.

Blue-gray Gnatcatchers are hard to see, but their nasal, high-pitched peeps and squeaky-toy-like calls – and bill snapping – are good auditory clues to start scanning the trees with binoculars.

Information for this article came from allaboutbirds.org, audubon.org and animaldiversity.org.