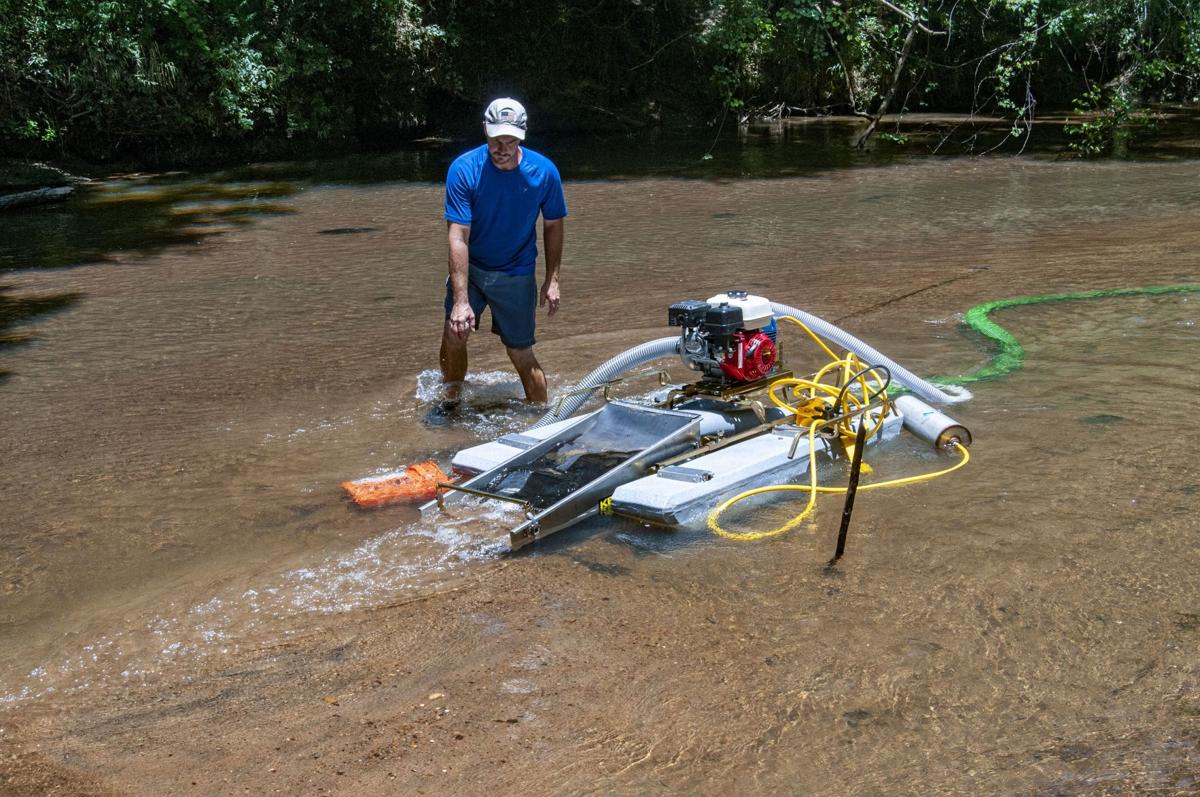 AU Prospectors member Warren Wyman demonstrates how the gold dredge sifts through material on the creek's floor and deposits gold and other heavy metals into a sluice box. 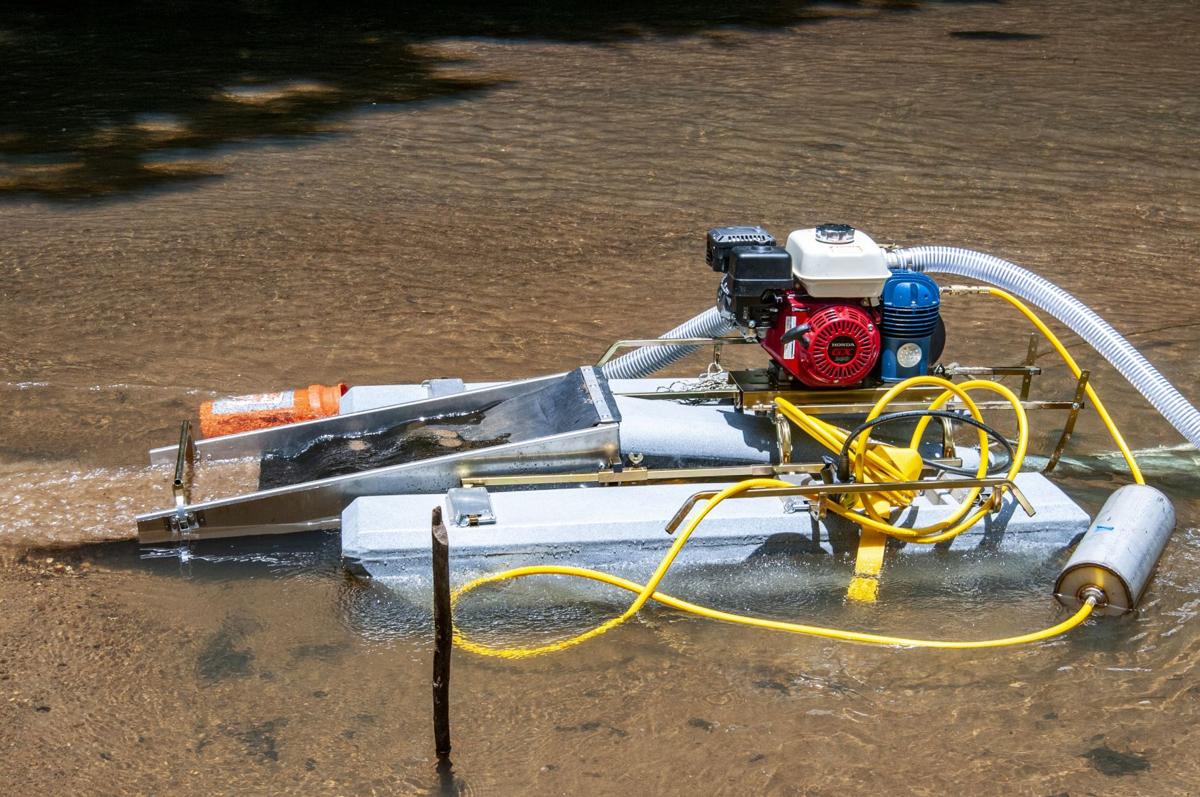 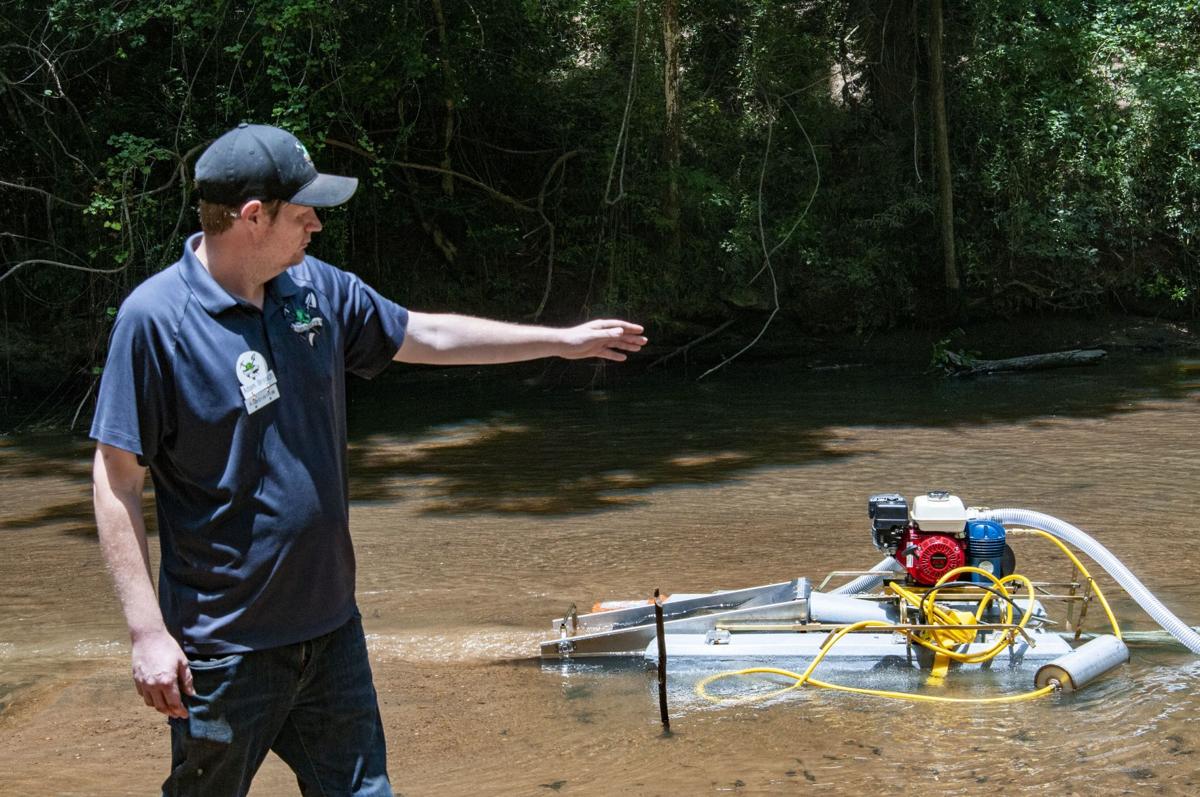 State Director of the Gold Prospectors Association of America Adam Broach explains the process of dredging for gold and the positive impact it can make on the environment. 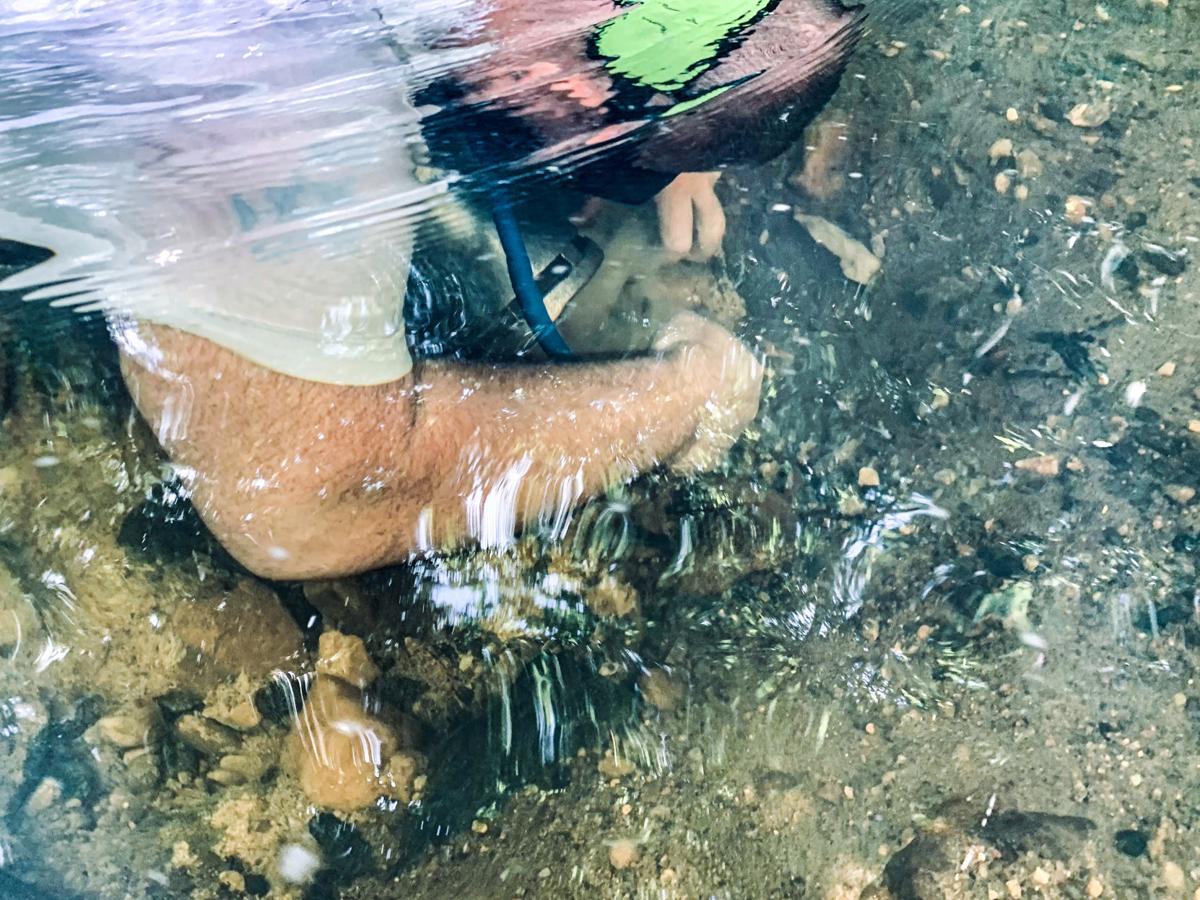 Dredgers loosen the gravels in the water using a suction hose that is attached to the dredge. The remaining lightweight gravel is deposited back into the stream as the dredge moves forward. 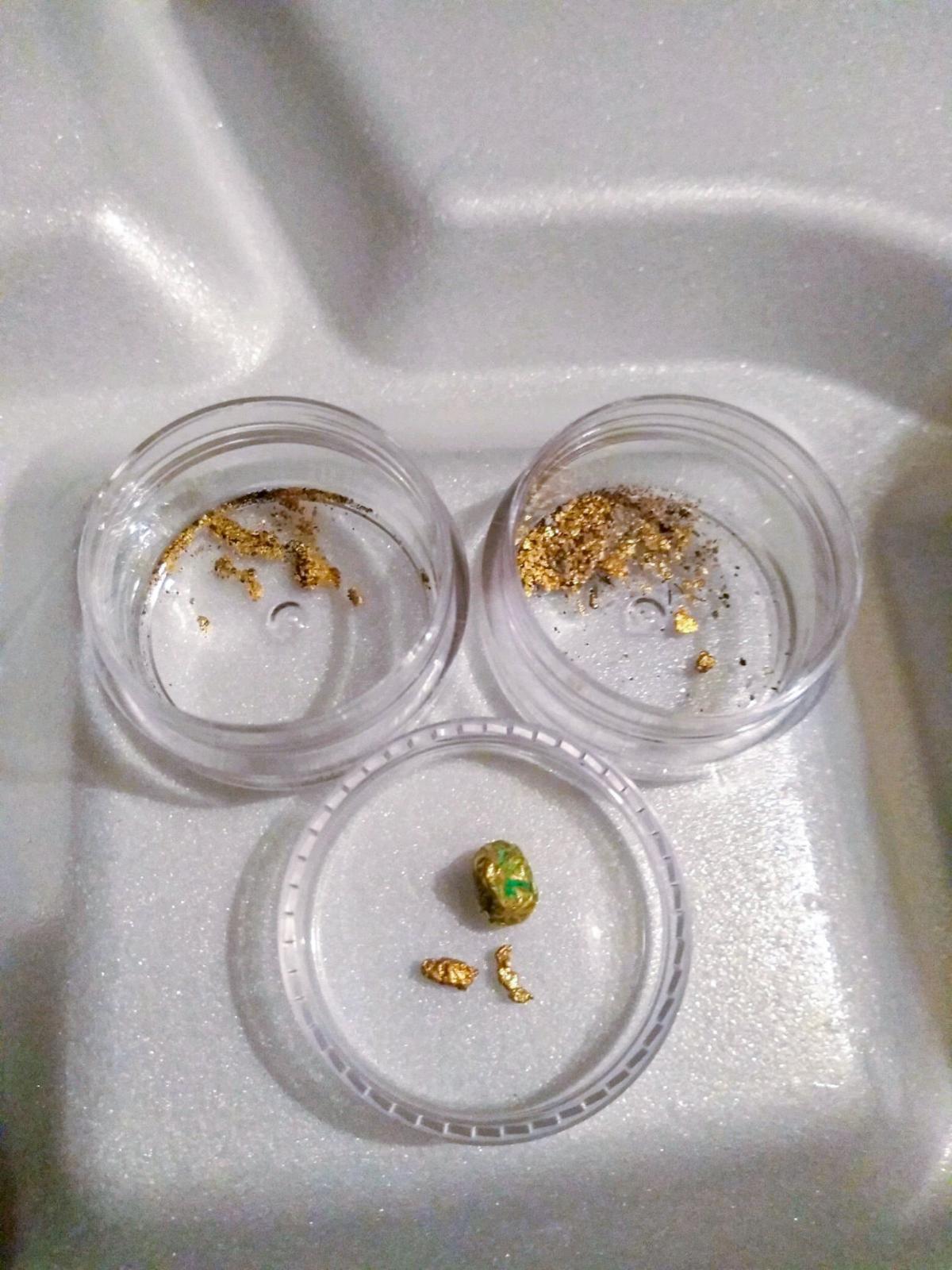 Gold is found in small forms in Tallapoosa County but is still abundant.

AU Prospectors member Warren Wyman demonstrates how the gold dredge sifts through material on the creek's floor and deposits gold and other heavy metals into a sluice box.

State Director of the Gold Prospectors Association of America Adam Broach explains the process of dredging for gold and the positive impact it can make on the environment.

Dredgers loosen the gravels in the water using a suction hose that is attached to the dredge. The remaining lightweight gravel is deposited back into the stream as the dredge moves forward.

Gold is found in small forms in Tallapoosa County but is still abundant.

Panning for gold conjures up visions of the Gold Rush days of the mid-1800s in California, but the truth is that gold is present right here in Tallapoosa County. The Auburn Alabama Prospectors Chapter recently leased land in the southern part of the county for gold dredging.

State Director of the Gold Prospectors Association of America Adam Broach wanted to re-invigorate a local chapter that had dwindled years ago. With permission from the national GPAA headquarters, Broach found a piece of land to lease and re-instated the group earlier this year.

“I’ve always been infatuated with history, which led me to research gold in Alabama around the Lake Martin area,” said Broach, whose ancestors settled in the Reeltown area after the Civil War.

His maternal great-grandparents from the Lumpkin family have a long history of working in gold mines and panning for gold during the Great Depression for extra cash. Broach’s great-great uncle Joseph Henry Lumpkin tried to encourage miners to continue their gold search locally instead of migrating to California with the droves.

“‘There’s gold in them thar hills.’ It was my ancestor Joseph Henry that originally coined that phrase,” said Broach, who grew up in Notasulga and graduated from Notasulga High School.

With his deep-rooted history and passion for gold dredging, Broach has been in the business for nearly 20 years and currently dredges on about 3/4-mile of Saugahatchee Creek, located on the 10 acres of land leased by the local prospectors chapter.

The area started out as a four-wheeler path only, but now there is an open walking path. The master plan is to eventually turn it into a campground with a meeting area off the entrance and a dredge launch, said Broach.

Currently, any member of the local chapter or the national GPAA has access to the leased land, and Broach has seen families come from Rhode Island, Florida, Georgia and more.

“It’s free to members to come use the land. They can camp and prospect. All the gold they find, they keep,” said Broach.

The value of gold is measured in grams, with one gram being worth about $45, he said. This means one ounce of gold is valued at around $1,400.

“It depends on your skill level, machinery and luck, really, to determine how much you can find at one time,” said Broach.

The process of dredging uses a suction waterhose to loosen hard pack gravels on the creek floor. The gravel is directed through a sluice box, where a ripple effect catches heavier materials and separates off the lighter stuff. Not only is gold – with a specific gravity of 19 by volume – caught in the sluice box, but also heavy metal contaminates, such as black iron sands, lead or mercury. Remaining gravel is deposited back in holes created in the stream as the dredge moves forward.

“Gold dredgers are also conservationists. We’ve removed hundreds of pounds of lead, mercury and other poisonous materials that can leech out and harm fish,” said Broach. “Some people think we’re polluting the water through gold dredging, but we’re actually improving the water quality.”

Removing these metal contaminates from stream beds improves fish habitat and creates spawning beds for fish, said Broach. No chemicals or harmful materials are used in the water to recover gold, he added.

Broach’s dredge is a professional grade Pro Line Gold Dredge with a hose size 6, 5-inch nozzle and two airlines for divers. It can move roughly 20 yards of material per hour and is valued new at about $13,000. Dredge hoses range in size from 2 inches to 8 inches. There is also a backpack version with a 2-inch hose available for about $2,200, he said.

“Each hose size you go up, you double the yardage of what it will run,” said Broach.

When dredging, Broach recommends finding areas where lead has accumulated and gold will likely be nearby. Placer gold is gold that has been liberated from its host rock and passed through the alluvial plain into creeks, Broach explained.

One explanation as to the existence of gold was that in liquid form, it flowed through the Earth’s bedrock and as it cooled it formed in quartz. The gold was trapped inside the quartz, and through natural erosion, the lode broke free.

“There’s a debate on how gold got here. The other side believes it came from a meteor that hit the Earth,” said Broach.

Part of the GPAA’s mission is to educate people on gold prospecting and dredging. Last year was the 50th anniversary of the formation of GPAA, which is a family-oriented organization.

Each year, it hosts national outings for members and non-members during days-long excursions. Any gold that is found is split amongst the group.

“We call them digger’s dirt parties. Gold adds up quickly when we all work together,” said Broach.

The local chapter meets every second Saturday of the month at 8 a.m. to dredge together and encourages anyone interested in learning more to try it out.

For more information on gold dredging, contact Adam Broach at 334-401-0471 or email him at adambroachgpaa@gmail.com.