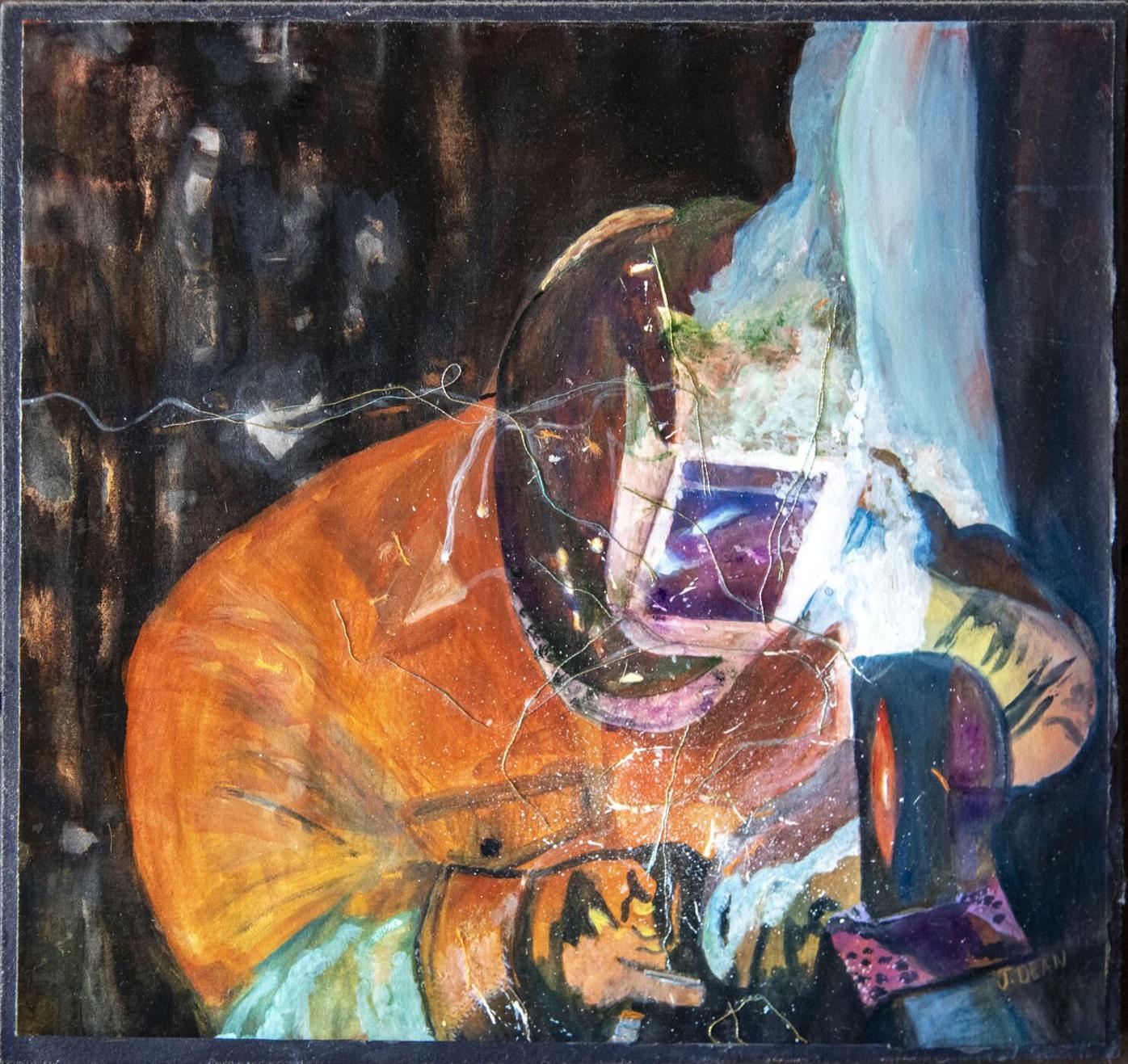 Dean has created a series of three welding portraits. This is the only one she currently has in her possession 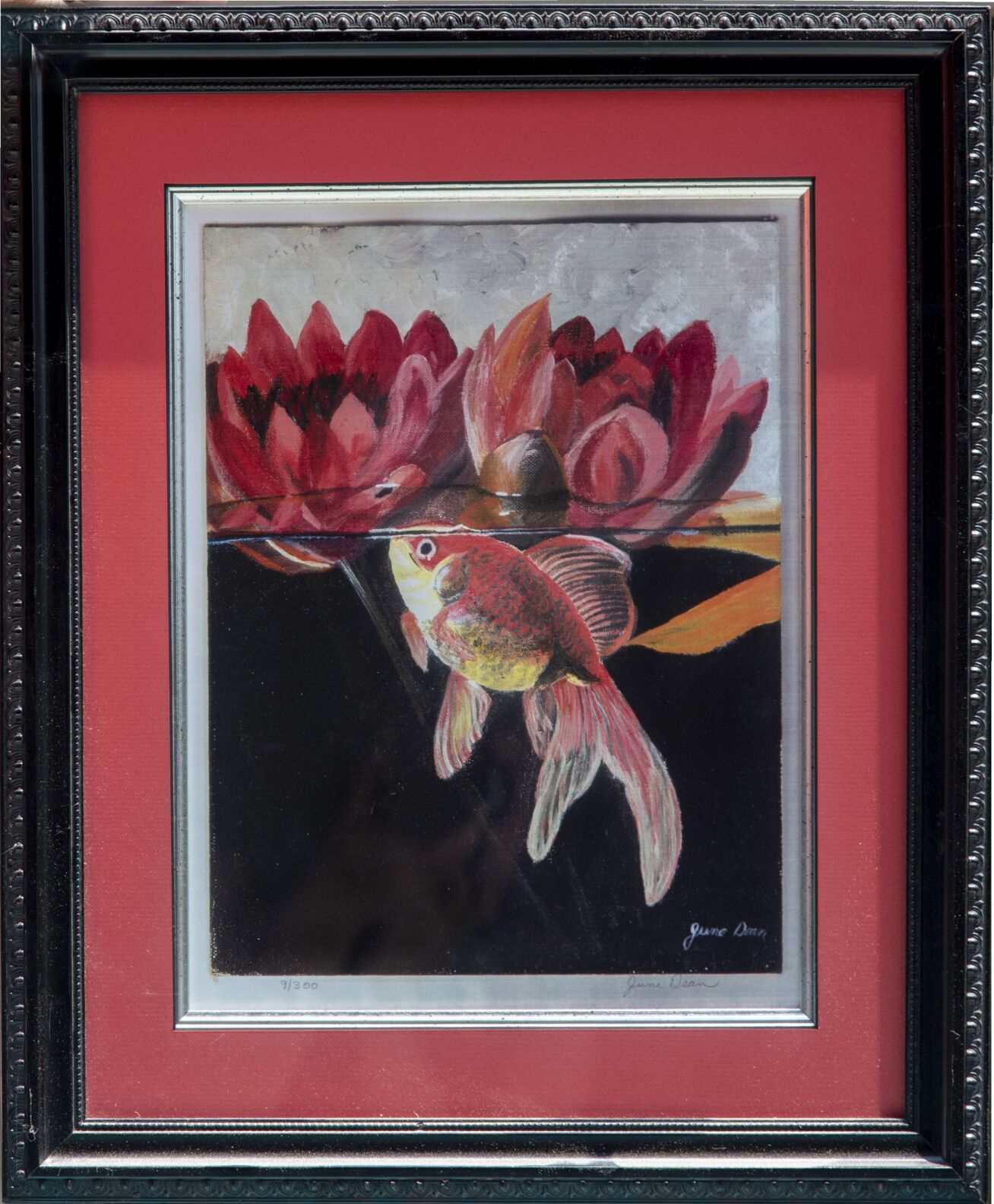 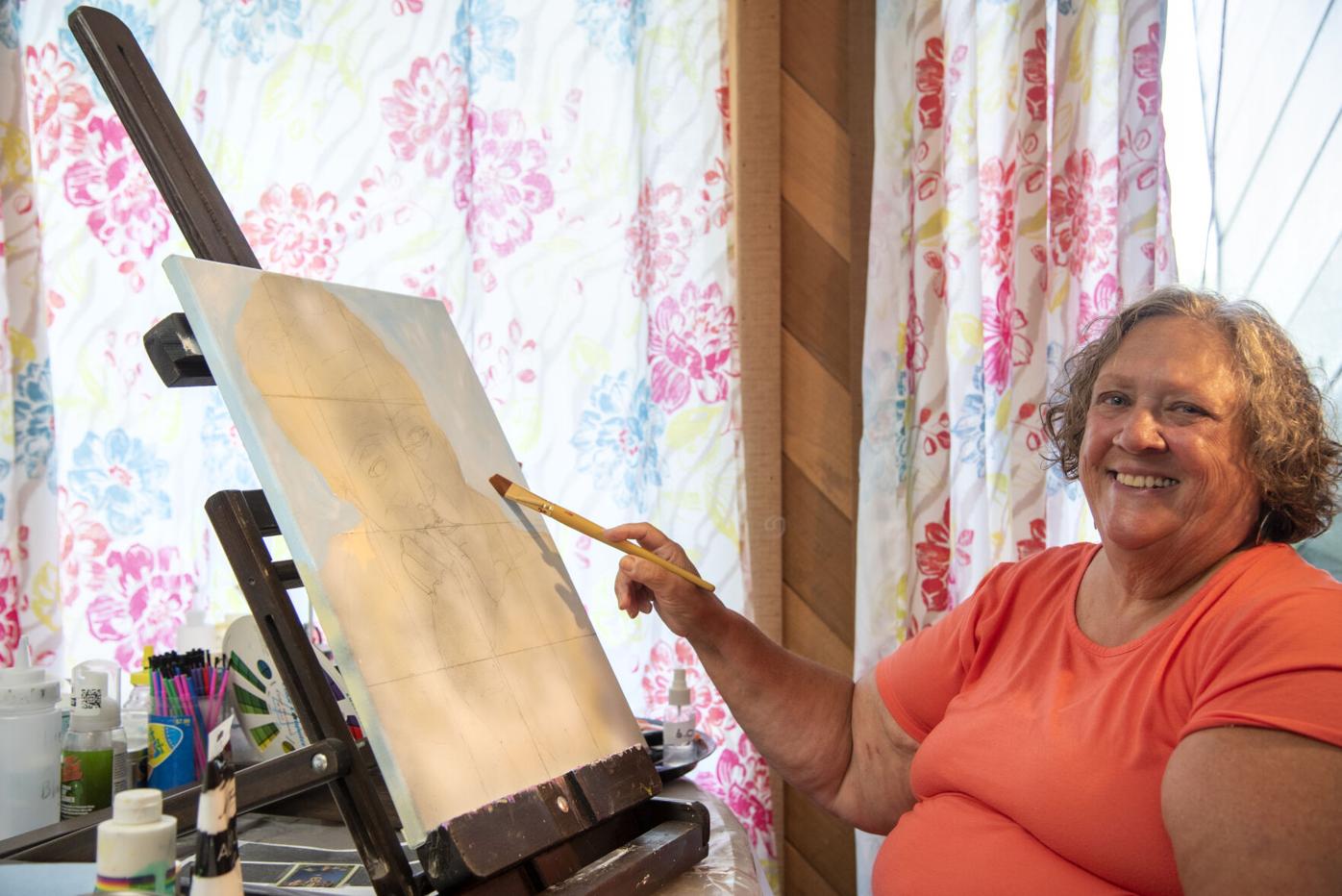 Dean is working on a portrait of Johnny Cash

God creates the Universe in the painting named Vulcan Forge. 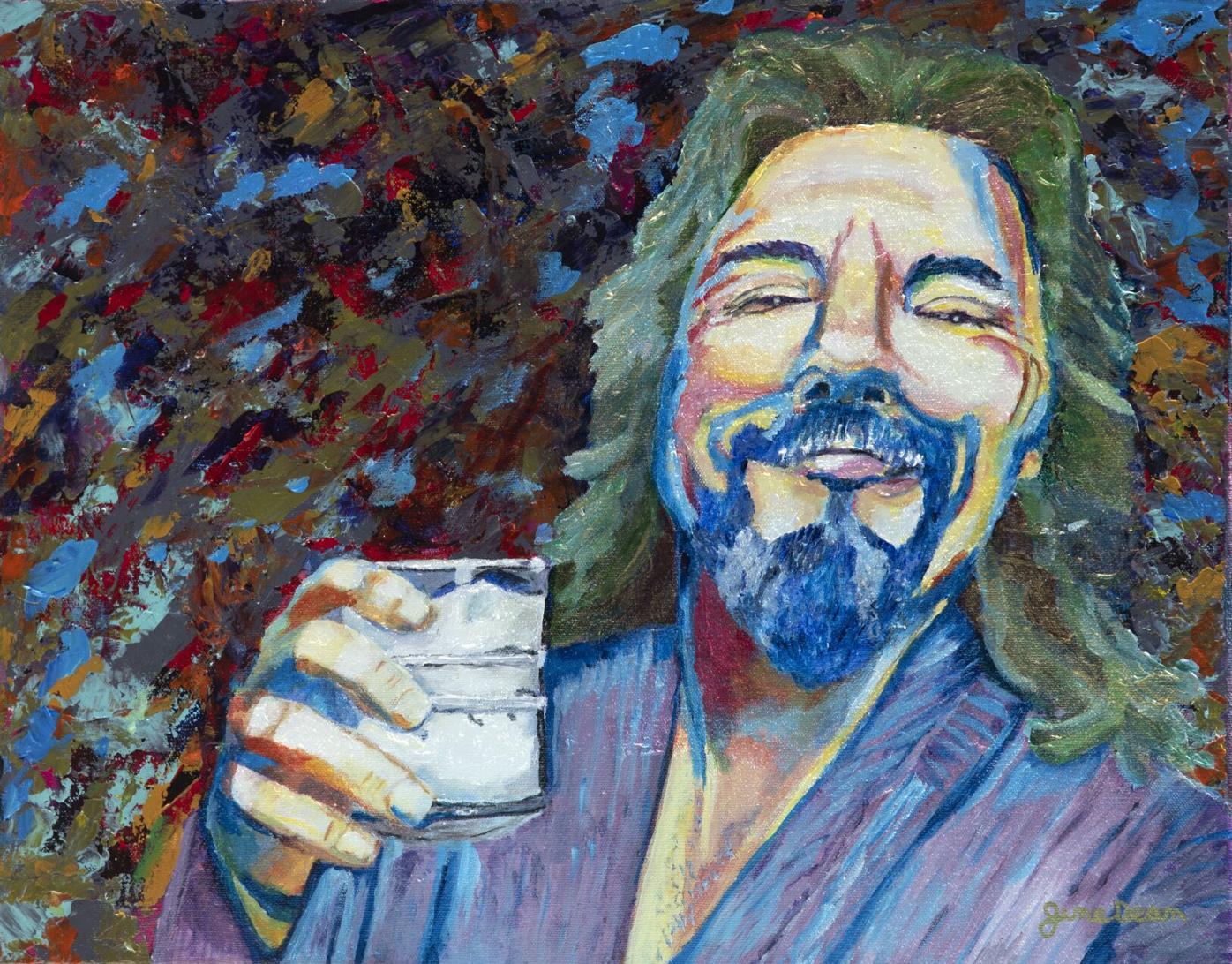 Dean has created a series of three welding portraits. This is the only one she currently has in her possession

Dean is working on a portrait of Johnny Cash

God creates the Universe in the painting named Vulcan Forge.

Born into a family of professional artists, creating came naturally to June Dean. She sold her first piece of artwork, a painting of roses, on a sidewalk in Portland, Oregon, when she was just 5 years old.

“I have had people call me from Washington State and Oregon and different places where I’ve sold art. They’d ask ‘Is this one of your works?’ and I go, ‘Ah, it looks like it,’” she said.

But Dean hasn’t created art on the West Coast since she was 20 years old, and looking at those pieces today is surreal to her.

“I was a different person then,” Dean said.

At 21, she came home from China with a vision of a Chinese woman in all her glory, kneeling in a Buddha temple. She could barely wait to paint the image, and when she finished, she sent it off to another artist for a critique.

“I was critiqued, in my opinion, harshly. And I remember my mother, who was also an artist, said, ‘Well, it was a really good beginning.’ And I thought, ‘I’ve been painting all my life, and if that is just the beginning – I’m quitting.’ And I quit. I didn’t paint a thing in public of any kind for 20 years.

“I was hard on myself,” she said. “And what I have realized is that I was painting at an amateur to a beginner’s mature level, but professional artists surrounded me – people who produced pastel works, abstract works even to realism, everything really. And I was striving to be pleasing to them. I was comparing myself to them and striving to have my work look like theirs. And I couldn’t do it anymore. So, I put the brush down.”

It wasn’t until 20 years later that Dean picked up a paintbrush again.

“I doodled and drew things in private all along, but I didn’t paint a thing in public,” she said.

Then one day, while at work, Dean was sitting at her desk doodling, and a co-worker stopped by. Seeing what Dean was working on, the friend became enthralled by Dean’s talent and invited her to an art class with a lady named Mrs. Nighty.

“So, we started going to a Mrs. Nighty together,” Dean said. “We paid $3 a visit. We painted for an hour and a half. Her husband, Basil, came out and gave us cookies and tea or coffee. Then we painted for another 30 minutes or so and went home with our little $3 project or whatever it was.”

When Dean picked the brush back up, she did so with no intention of painting what Mrs. Nighty was teaching. She was itching to paint again, but this time, for herself, not to please anyone else.

Mrs. Nighty’s only request was that Dean shared with her what she was painting. Dean agreed, and the teacher began to work with her one-on-one.

“This is when I found my own voice,” Dean said. “I came back to art, and I found my voice, that is what we call it, and I stopped trying to mimic what is or had been around me.”

Not long after finding her voice, Dean and five other artists started an art club in Montgomery called Bama Brush Strokes. The club earned national and international sponsorships through decorative artists and is still a very strong club today; however, Dean has since moved on from Bama Brush Strokes and has played a considerable role in bringing artists around the East-Central Alabama region together. Jan Dempsey in Auburn wanted Dean to start a club there several years back, but that wasn’t what Dean had in mind.

“I agreed to lead an art group in Auburn,” Dean said. “But I did not want to deal with any funds or bylaws; I am done with that stuff.”

So, about 20 or so years ago, Dean began holding open studios in Auburn, she said.

“At open studio, artists of any level come together and paint,” she said. “Bring your paint, bring your canvas and we all interact with each other in the art community.

“But then I moved to Alexander City. The artists in this area, which are plentiful, were forming an art group called Artists Association of Central Alabama, and I became a part of the group,” Dean said.

Not long after Dean joined the association, they began open studios in both Alexander City and Dadeville.

Prior to COVID-19, AACA was very active in the community. The group held open studios weekly in Alexander City and Dadeville; however, the virus affected the club just as it affected other businesses and people’s lives. AACA is actively working on getting open studio back up and running.

AACA is also in the process of developing an evening Paint With Me program, which will take place in Dadeville as well. For more information or to join the club, contact June Dean at 334-313-7533 or visit the website at artistsassociationofcentralalabama.org. They also have a Facebook page.

In the meantime, Dean is working on several pieces for upcoming events. Most recently, a piece of her art that she deemed “The Dude,” based on the Jeff Bridges character from the movie The Big Lebowski was featured at the Historic Nunn Winston House at Auburn’s Kiesel Park during the Auburn Arts Association 2021 Juried Art Show. She is also preparing pieces of Johnny Cash for an upcoming tribute collaboration with other fellow artists in Alexander City.

There is no doubt that when Dean cannot be found, she is probably firmly nestled in her workspace, creating her next vision, whether it be a pour, acrylic or any other kind of paint, pencil or even ink project, Dean is always creating.

“I no longer create for others. Do I sell my works, sure. Do I create them to sell, no,” Dean said. “I create because I have to. It’s like breathing to me.”