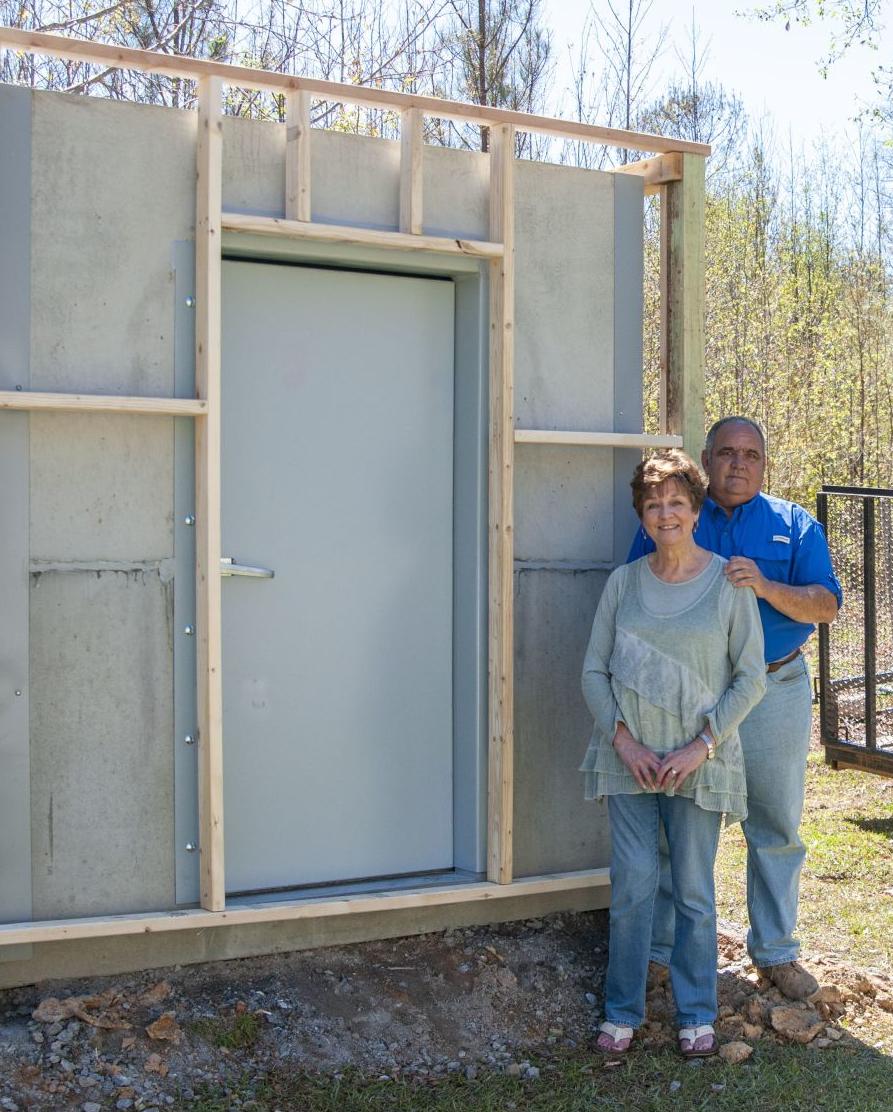 Bill Hough gave his wife Diane the gift of peace of mind when he purchased a storm shelter for Mother's Day. Hough is constructing a shell around the shelter to make it more aesthetic and to blend it in to the neighborhood 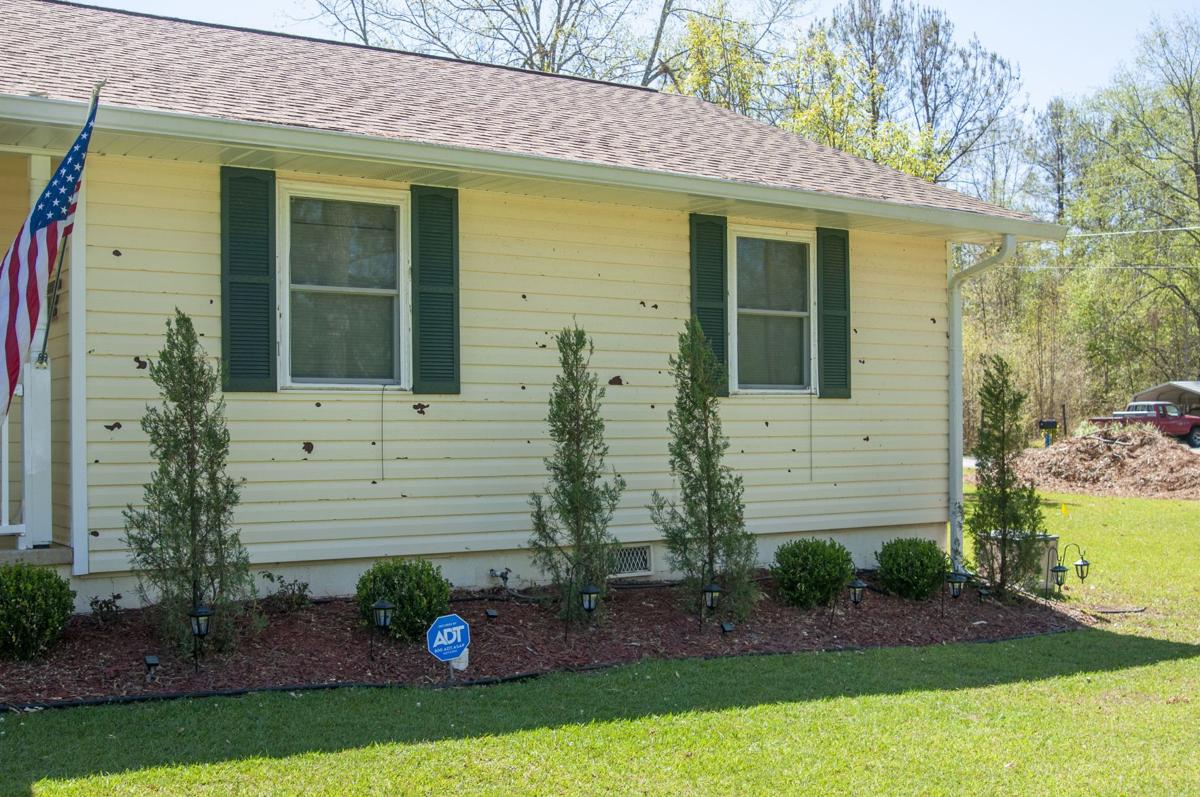 A recent hailstorm damaged the siding on the Houghs' home.

Bill Hough gave his wife Diane the gift of peace of mind when he purchased a storm shelter for Mother's Day. Hough is constructing a shell around the shelter to make it more aesthetic and to blend it in to the neighborhood

A recent hailstorm damaged the siding on the Houghs' home.

Bill and Diane Hough have lived in their Alexander City home for nearly 26 years, and like anyone who has lived in Alabama for an extended time, they are familiar with the temperamental Southeastern weather. One day, the sun is shining, and life is good; the next, everyday activities are interrupted by storm clouds on the horizon or the scream of weather-warning sirens. Every storm brings the threat of changing life forever. With this in mind, the Houghs took some steps toward personal security – and at the same time, extended a helping hand to their neighbors.

Bill Hough hails from West Newton, Pennsylvania, but his wife Diane is from Montgomery. Hough is retired from the Tallapoosa County Sheriff’s Department, and Diane is retired from Wells Fargo Bank.

They recently had an aboveground storm shelter installed in their backyard. The home they live in has no basement. Having lived in Alabama for so long, the couple is familiar with Dixie’s notoriously violent weather.

Diane said that she has always wanted a storm shelter; however, she was hesitant to spend the money until her husband offered to have it put in as a Mother’s Day gift.

“In Alabama, we have tornadoes dropping everywhere. This shelter gives us a sense of security,” Hough said.

Since the shelter has been installed, the couple has extended to their neighbors the security that it offers, making their shelter available to about 15 people on their street.

“We’re so close. We just take care of our neighbors,” Hough added.

Diane remarked that the neighborhood was made up of older residents and some families, many of whom are without a safe place to take refuge in the event of a bad storm. A recent string of storms hit the houses on their street particularly hard. Piles of fallen limbs lined the street, and the April 19 hailstorm left shattered windows and damaged the siding on houses up and down the street.

“I was scared to death with this last storm,” said Diane. “It sounded like rocks hitting the house. We were huddled in the closet.”

The shelter was not installed until after the weather front that hit the area last month. These storms left a trail of destruction across the Southeast. With wind speeds ranging from 70 to 80 miles per hour, the storms drove heavy rains, violent hail and flash flooding throughout Tallapoosa County, with the most serious damage in Alexander City. Trees and power lines were down in every part of the county, leaving many homes damaged and residents without power.

In the Houghs’ neighborhood, a fallen tree forced one family to escape through a window. While no major injuries were reported, there was still significant property damage.

When choosing a shelter, the Houghs decided on an above-ground model, feeling that it suited their needs best. Their shelter came with special features that offer extra security, including a door that opens to the inside, to prevent occupants from being trapped if the door was blocked.

The 33,000-pound concrete shelter is secured beneath a pad of crusher run with augers bored more than 2 feet into the ground. It can hold 15 to 20 people.

The shelter was installed by Merry Hardy of Lake Martin Storm Shelters. The installation was completed in roughly two hours, and the safe room is designed to withstand a Category 5 storm.

“Merry and her crew did an excellent job,” Hough said.

Hough said that he and his wife have known Hardy for many years and have passed the storm shelters she has on display on state Route 63 several times.

He plans to add a wooden frame and siding around the shelter to make it look more like a regular building or shed. He hopes the building would double as Diane’s ‘she-shed.’

In the meantime, the Houghs are preparing the shelter for use by making it more comfortable and stocking it with non-perishable items such as water, batteries and other items on the supply checklist Hardy provided them at installation.

“It’s better to be safe than sorry,” Hough concluded. “It may not be for everybody, but you have to consider the alternative. I don’t want to take anything for granted.”

The mother of two, grandmother of seven and great-grandmother of three who has distanced from her family since the state’s COVID-19 outbreak, Diane plans to put family pictures in her new shelter in case the worst happens.