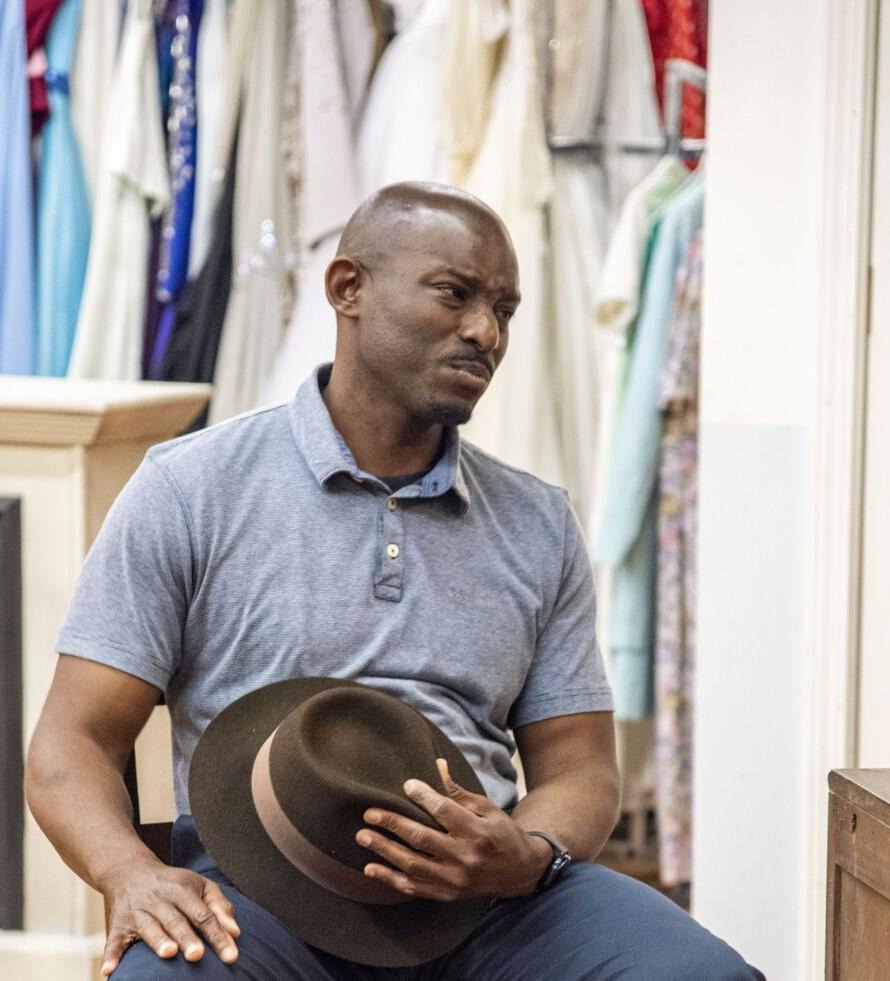 Ruffin's facial expressions and body language make him a natural on stage. 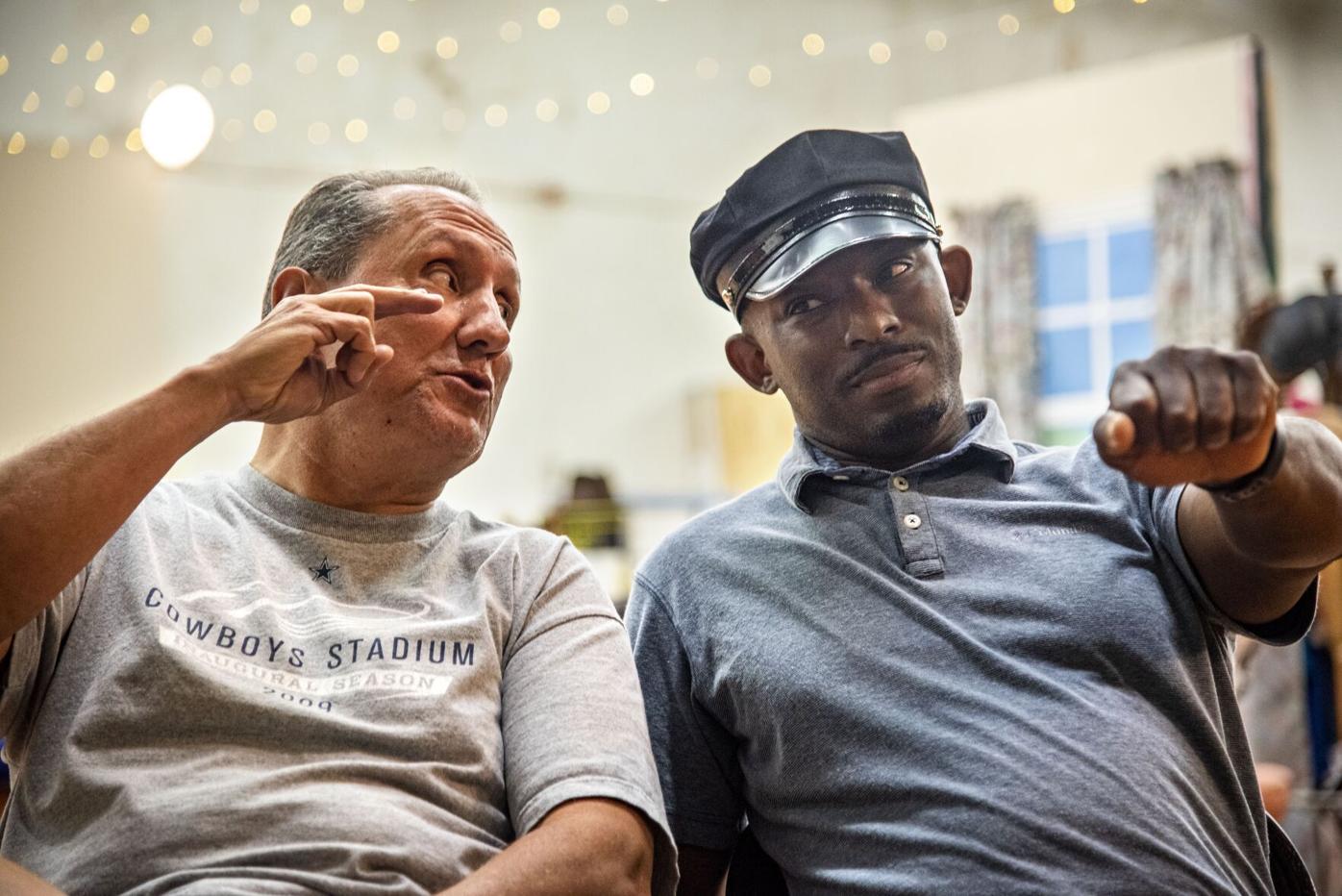 Ruffin and castmate, David Upton, who plays Boolie, rehearse without scripts in preparation for opening night.

Ruffin's facial expressions and body language make him a natural on stage.

Ruffin and castmate, David Upton, who plays Boolie, rehearse without scripts in preparation for opening night.

“Well, hello Denzel,” is how Raheem Ruffin’s brother Marvin greets him now that he has been named the lead role of Hoke Coleburn in Driving Miss Daisy for Act II in Alexander City.

“My family is my biggest supporter, but it also means I have to do well because if I don’t, they will never let me live it down,” said Ruffin, who is not an actor by trade, but in fact, a high school teacher and coach.

“This is my first performance. I saw the advertisement, and I thought I would give it a shot. Lo and behold, I ended up getting the part,” Ruffin said.

Ruffin, an acclaimed quiet kid turned class clown, said his family has always pushed him to become a comedian; although, he is quite the funny man, he just didn’t believe that becoming a comedian would be conducive to his lifestyle.

“For the last 20 years, I’ve been dedicated to making sure that my family could do all of the things that they wanted to do, and this play was something where it’s just for me,” Ruffin said. “It gives me a chance to step outside of the box, but also, it gives me the opportunity to be an example for my kids to not be afraid to do something outside of the box.”

Ruffin is a huge proponent for living life, even if it means doing something scary. As a father of four, he strives to teach his children to be fearless in the pursuit of their dreams and desires.

“When my oldest daughter was four, she wanted to go down the big slide at the fair, the one with the potato sacks, and I don’t do heights or roller coasters, even that slide, that was a reach for me, but I did it. I didn’t want her to see me be afraid,” said Ruffin.

“And then some years later, we took the kids to Disney, and they wanted to ride a roller coaster,” he said. “We waited three hours, and when we got to the gate, I thought they were going to back out, but they didn’t. They were ready. I rode that thing with my eyes closed, but they had the best time.”

Prior to children, Ruffin was not an adventurous person, but becoming a father has pushed him to make choices and choose experiences that otherwise would have been a hard no in the past.

“My son, he’s 11. He is a carbon copy of me. He sees all of the good in the world, but he’s a quiet kid. He hasn’t yet come out of his shell, and me participating in this show – it’s more for him than it is for me,” Ruffin said. “This is to help him come out of his shell and see that it is OK to take chances and not be afraid to live.”

Ruffin admits that while he is thoroughly enjoying his newfound role in Driving Miss Daisy, preparing to portray the role of Hoke has been an experience where he has had to leave his ego at the door.

“There are three of us that are actually in the play, and the other two actors have been in other plays, and man, they are good,” he said. “They are always encouraging, but I’m a bit of a perfectionist, and I can be pretty hard on myself, especially with me not having as much experience.”

Ruffin also owns a business where he trains kids in baseball and softball, and he said he could do that in his sleep, but acting, for him, is different.

“I told them, ‘you all know more than I do. Whatever I’m doing wrong or if there is anything I can do better, please let me know,’ and I say that because when I walk in that room, I leave my ego at the door, and at the end of the day, when we hit the stage and its live, I want to do the very best that I can,” Ruffin said.

Although preparing for the role of Hoke has been a challenge as far as learning the ropes of the stage, actually relating to his character has been somewhat easy, Ruffin said.

“From the start of the play, Hoke is down on his luck and looking for work and ends up with the job of driving Miss Daisy, and she is not having any of it. She is rough around the edges and stuck in her ways, and Hoke is, in my mind, a southern gentleman and just an easygoing guy. Anybody else, Miss Daisy probably runs off,” Ruffin said. “But there again, it’s one of those things where Hoke is between a rock and a hard place. He needs the job, and at that time, his wife had died. He still had his daughter and grandkids that he wanted to support, and so he dealt with this rich Jewish lady.”

According to Ruffin, Hoke is a prideful guy. He said that as an elderly black man in those times, he believes Hoke had seen enough in his life that he can do his job, deal with Miss Daisy, played by Betsy Iler, and pass no judgment on her and just continue to move forward.

Ruffin also believes that Hoke sees this opportunity with Miss Daisy as a challenge because they are from different backgrounds.

“The challenge was in the lines of ‘I’m going to keep this job, and I’m going to show this lady, you know, a different side and that there is a different way to life than what she is probably used to.’ He was just the right man for the right job at the right time, and in that sense, I can relate to him because Hoke is a thoughtful person, and I believe I am an extremely thoughtful person, too,” Ruffin said.

“I believe, like myself, that Hoke understood what he was getting himself into. He didn’t lump Miss Daisy into a group of people that she was used to associating with, but rather, he dealt with her on an individual basis and that’s how I do things, too,” he said.

“My parents raised us to do what we are supposed to do; be nice human beings, serve people, and even be extremely forgiving of people – even to the point of where we are probably way too forgiving,” he said. “I think Hoke is the same way with Miss Daisy.”

Ruffin said that Hoke forgives Miss Daisy for a lot of her misdeeds, and he never lets it affect his job or his relationship with her, but inevitably he does have an effect on her.

“That is how I am, too. When coaching and teaching and in everyday life, I try not to let what’s going on around me in the world affect what I do. I try to have a positive effect on the people that I am around,” Ruffin said.

“And so when I saw the audition for this play advertised. I just went for it. It felt right and good,” he recalled. “And I always say that everything happens within its time and when it is supposed to happen. I just felt like this is what I’m supposed to be doing at this time.”

The cast will perform Driving Miss Daisy on April 30 and May 1 at the Town Green Stage at Russell Crossroads. The show will begin at 7:30 p.m. and general seating is free, or reserve a cirlce for $30 to get the best seats. Call 256-749-8073 for circle reservations.