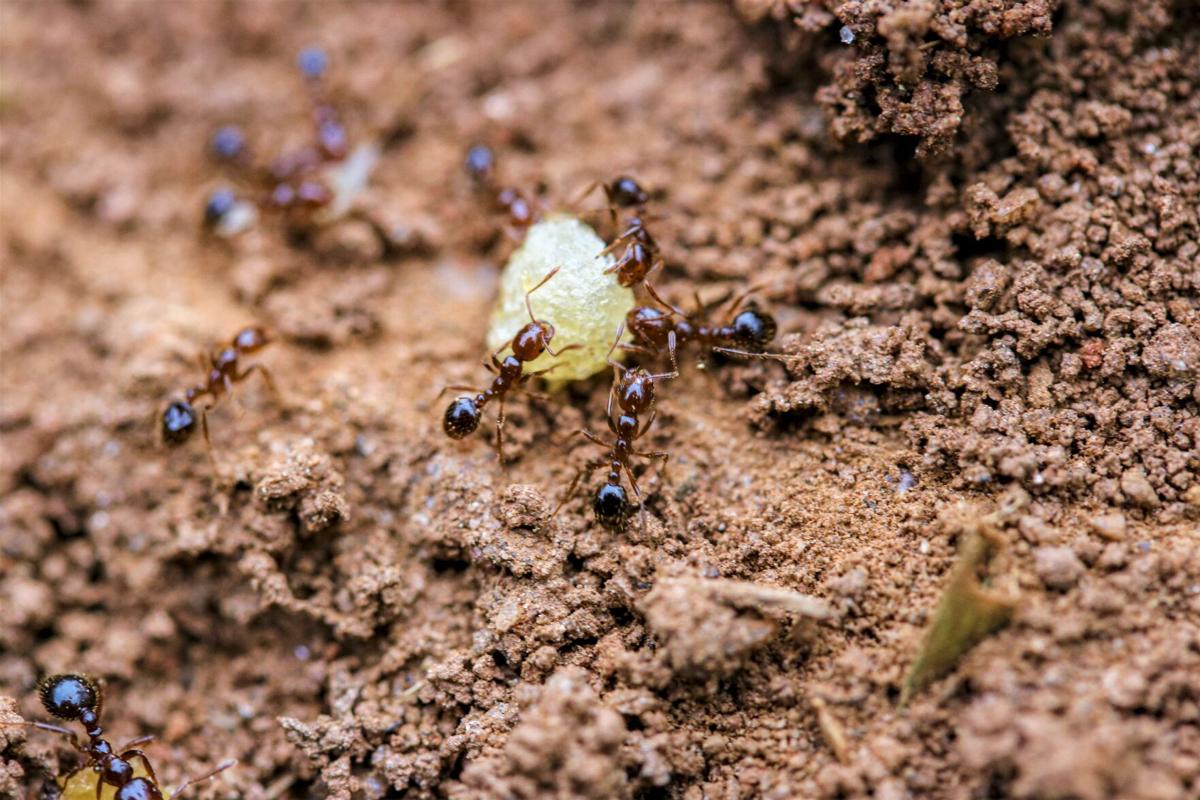 Ants forage and pick up granulars of bait 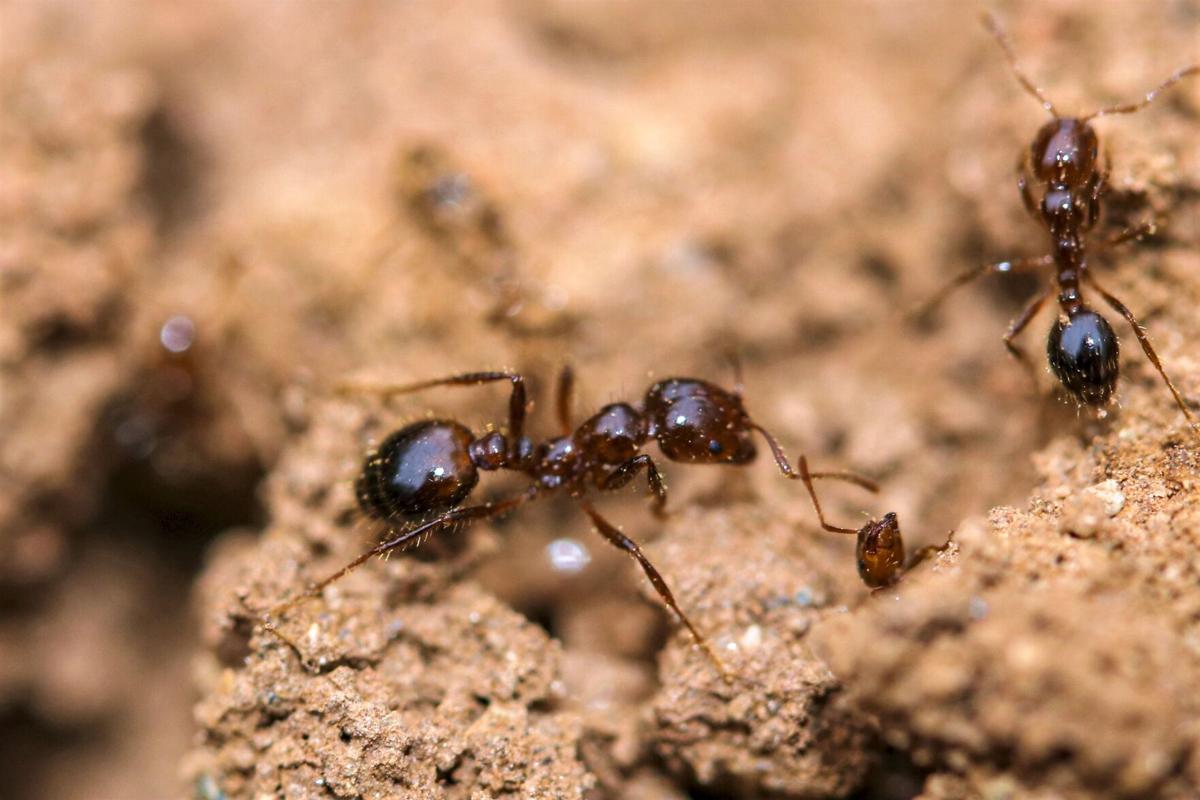 Workers move the brood and the queen deep into the mound during the hot summer months. 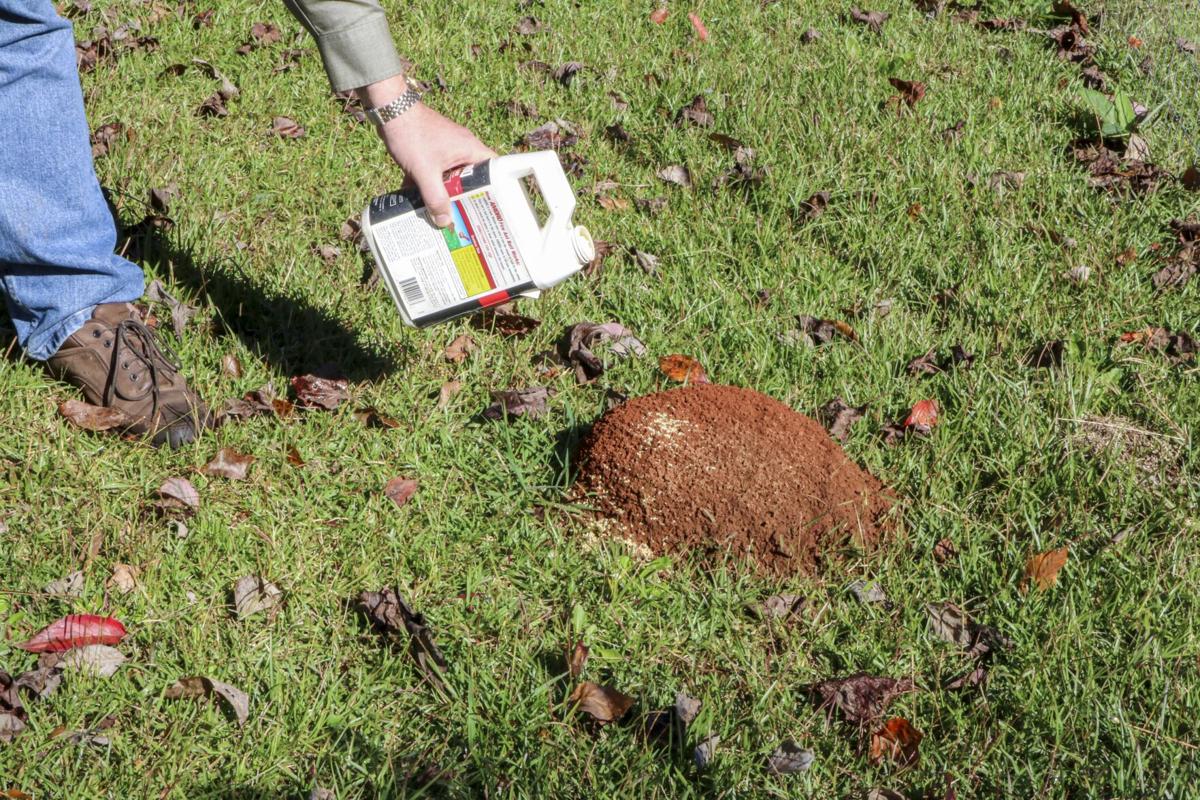 Broadcast applications of fire ant bait are the most effective method of management.

Ants forage and pick up granulars of bait

Workers move the brood and the queen deep into the mound during the hot summer months.

Broadcast applications of fire ant bait are the most effective method of management.

Imported fire ants are a year-round problem in the South. Their unsightly and sometimes damaging mounds are an ever-present sight in our landscapes. For an effective fire ant management program, now is an excellent time to look at how the timing of pesticide applications affects treatments.

Broadcast applications of contact insecticides can slow reinfestation for a month or longer depending on several factors. These factors include the active ingredient in the product, the rate the product is applied, soil type and the weather. For example, products containing bifenthrin will kill quickly and provide residual activity for up to three months, depending on the rate applied. Products containing fipronil may provide residual activity for up to six months, depending on soil type, but take several weeks for effects to be seen in the field. There are combination products on the market that contain fipronil and other faster-acting active ingredients that are effective and provide a quicker kill along with extended residual activity.

Granular formulations applied via broadcast may need to be watered in with irrigation, or the pesticide will not be fully active until a rain event. Broadcast applications require complete coverage of the treated area. They leave residues in sensitive areas, and most of the products are non-selective. If you are using one of these products for other insect problems, such as mole crickets, fire ant control is an added bonus.

Treating individual mounds with contact insecticides works well to get the product to the brood and the queen. They can be fast-acting, easy to use, and minimize insecticide residues if you have just a few mounds in a small area. Liquid products require mixing approximately two gallons of insecticide solution to get the product deep enough into the soil to reach the queen. While granular products usually use around a 1/2 cup of product sprinkled on and around the mound, most labels recommend watering in with one to two gallons of water. Mound treatments require mixing or hauling large amounts of water, especially if you have many mounds to treat.

Individual mound applications are not as effective in the summer heat as they are in the cooler months of the year. During the heat of the summer, particularly during periods of especially hot, dry weather, many mounds may remain underground and can be hard to find above the soil surface. Visible mounds can extend to over 6 feet deep in the ground and contain 200-300 feet of underground tunnels. The summer sun can heat the mound and ground to temperatures that can kill workers. Therefore, workers move the brood and the queen deep into the mound where temperatures are cooler, making it difficult to get an individual mound treatment in contact with most of the workers and the queen. A couple of gallons of water does not move deep into hot, dry soil.  Since the product tends not to get to the queen fast enough to kill her, the workers escape with the queen through foraging tunnels and form a new satellite mound nearby.

Individual mound treatments are much more effective during cooler temperatures. In cooler weather, the mound acts as a solarium. Ants bring the queen and brood near the surface of the mound where temperatures are warmer.

Bait Applications: Broadcast applications of fire ant bait are the most effective method of fire ant management for areas over one to two acres. However, knowledge of how baits work is essential for proper bait application. Baits use the natural behavior of ants to distribute the toxicant to the colony; the ants perceive the bait as food and do the work for you. As the ants forage for food, they find the bait and carry it back to the mound. Once the bait is back at the mound, it is fed to the queen and immature ants first, leaving little to no residue. Once the queen is dead, the mound will die.

Timing the broadcast application to forage behavior can be inconvenient and sometimes difficult. A 1987 study in Florida found that soil temperature at 3/4 inch was the best individual predictor of foraging rates. Maximum foraging occurred between 71 degrees, and 97 degrees Fahrenheit.  Soil does not warm to this temperature range during the late fall and winter months; therefore, ants do not forage far from the mound. As a rule of thumb, broadcast fire ant bait applications are not recommended between October 15 and April 15 due to cool soil temperatures that may discourage foraging. These dates apply to central Alabama and may need to be adjusted depending on spring and fall temperatures.

During peak summer months, the soil gets too hot for ants to forage during the middle of the day. If you have ever walked barefooted on the beach mid-day in the summer, you can understand why ants don’t forage until later in the day when soil temperatures are cooler!

Fire ant baits use vegetable oil as a carrier for the active ingredient. The vegetable oil also serves as an attractant to the ant. Any bait applied during mid-day during hot weather will sit on the ground in the sun since the soil is too hot for the ants to forage. As the bait sits on the hot soil, the oil dries out, making the bait less attractive to the ants. Once the soil has cooled a bit in the late afternoon, foraging ants come upon the dried-out bait. This dried-out bait tends to be less attractive to the ants and may not be picked up.