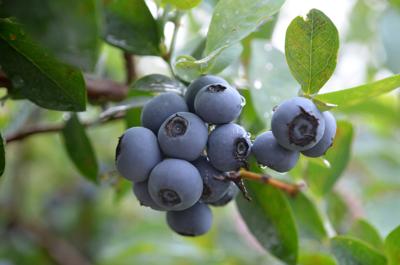 If you have decided to try blueberry plants and do not know which cultivars to plant, you need to ask yourself a question. How will the planting be used?

Some growers want all the berries to ripen at the same time, so they can be harvested at the same time; however, if marketing the berries at a farmers market, roadside stand or picking your own operation, you will probably want to extend the season.

This is accomplished by planting several different cultivars that bloom and ripen over an extended period. Of course, the danger of frost is always a concern, but a grower could add a few Southern highbush types to go along with the rabbiteye types. The Southern highbush does produce an early fruit that is of very good quality.

The Southern highbush has been gaining in popularity in Alabama for many years and is worth a try for many growers. Plant the berries on a small scale and watch how they make it through a few spring frosts before planting in high numbers.

Vaccinium ashei, or the rabbiteye type, is the most common blueberry found on Alabama farms and home plantings. There are several different rabbiteye blueberry cultivars that can be found at nurseries, and I would suggest planting different varieties. Planting several cultivars not only extends the picking season but also aids in cross-pollination. The more cross-pollination, the better quality fruit will be produced.

Climax, Premier, Vernon and Alapaha are in the early-season category. Climax and Premier are favorites because they are very sweet and have been around for a long time. Vernon and Alapaha bloom after Climax but ripen about the same time. This may be an added benefit during early spring frosts.

Tifblue blueberry has been the standard mid-season berry for a long time, and it is still a quality fruit. Powderblue, Ochlockonee and Columbus are mid-season berries that do well and also do not crack as easily during wet weather.

Centurion, Baldwin and DeSoto are three good options that would extend the season.

Brightwell, Montgomery, Titan, Ira and Yadkin are a few other plants that bloom when some of the early- and mid-season plants bloom. No matter what blueberry cultivars you plant or have already planted, make sure they are cared for properly. This includes weed control, mulch, irrigation and pruning correctly. Although proper fertility is important, it is not going to help production without these other management practices.