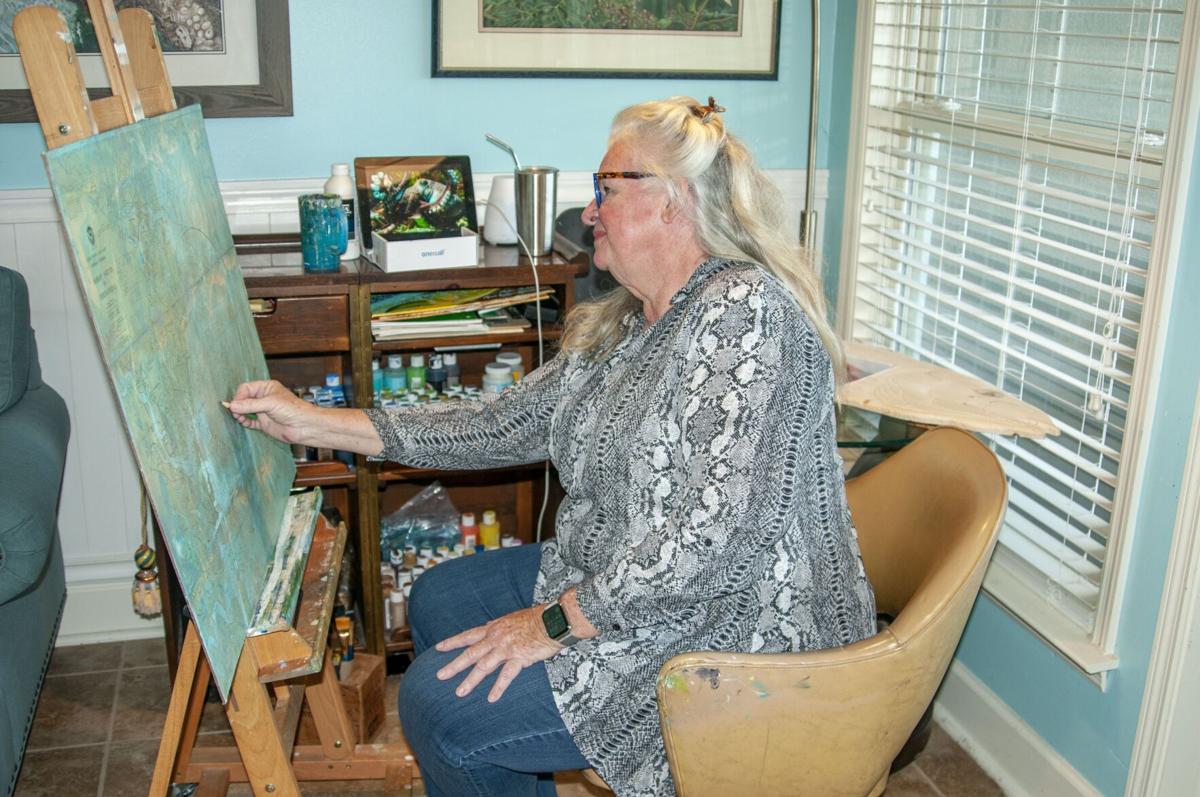 Amerson loves painting or drawing wildlife, but mainly birds and fish, because they are vibrant in color and they always teach her something new. 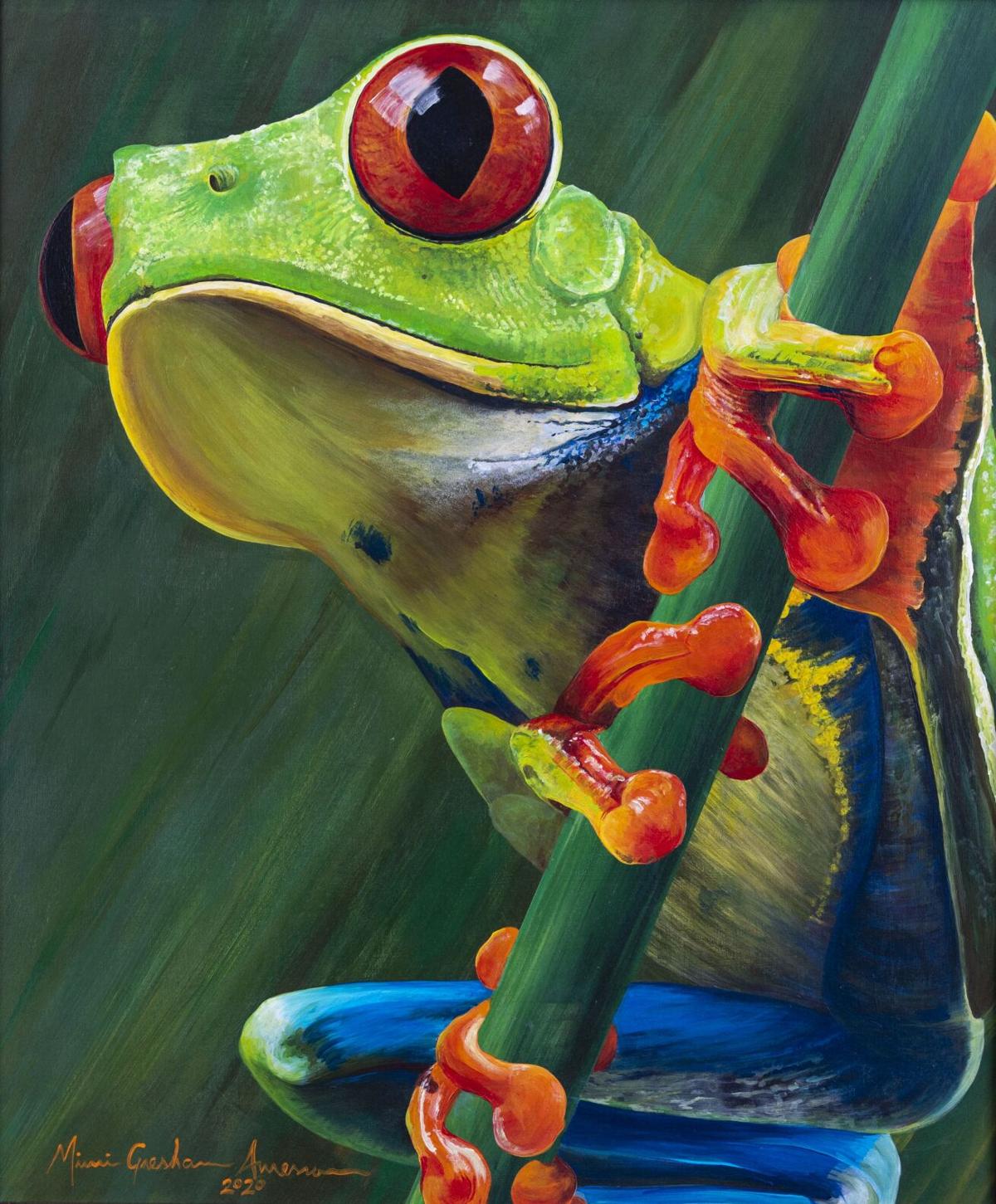 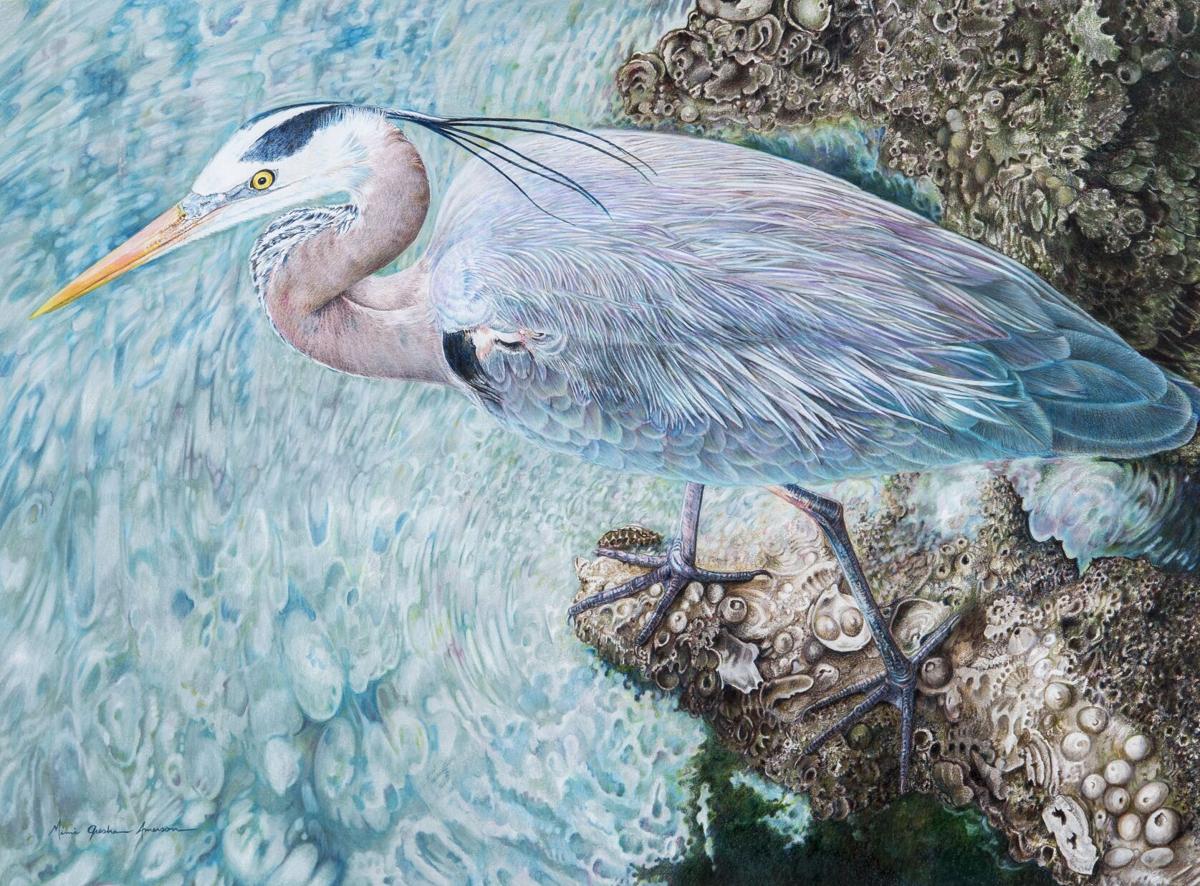 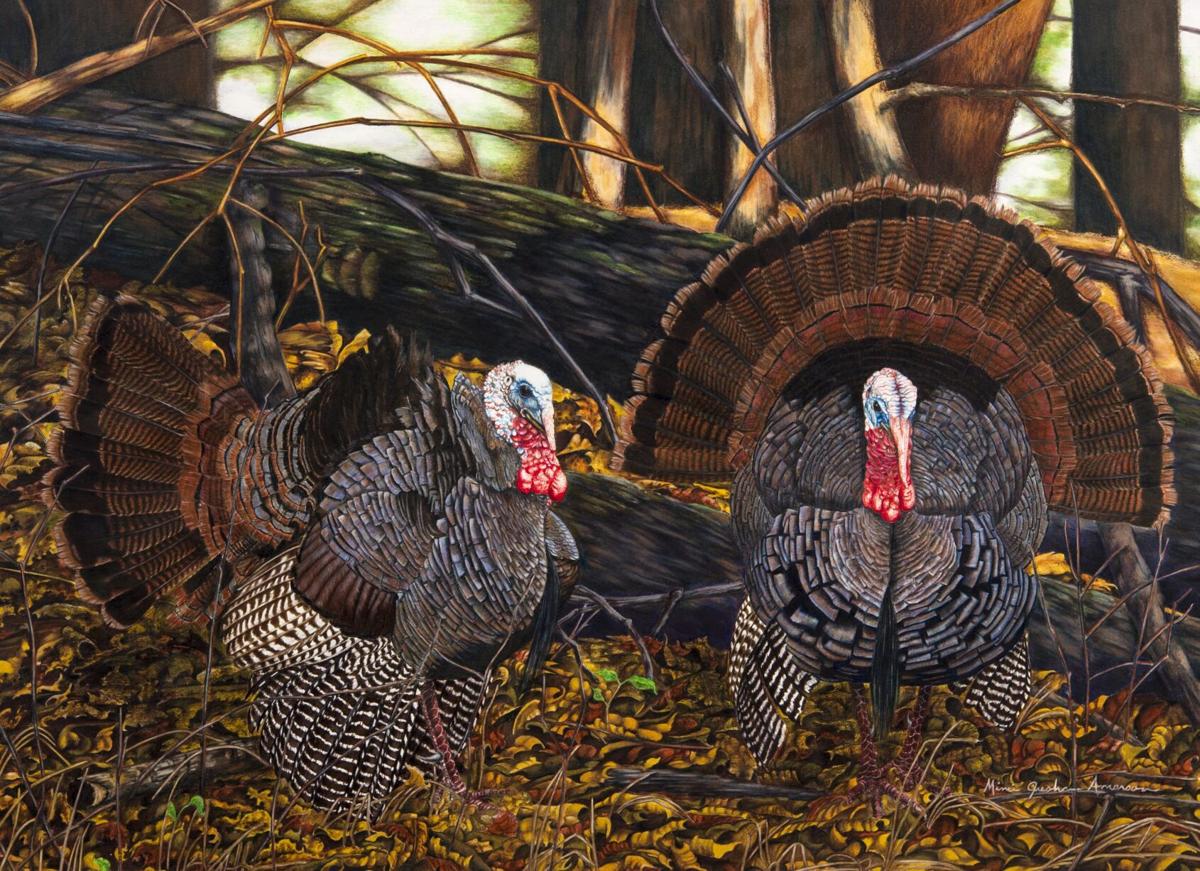 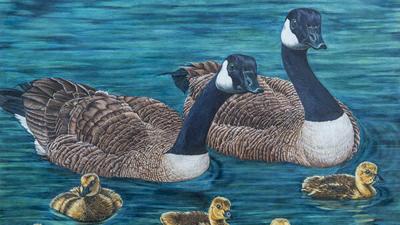 Amerson loves painting or drawing wildlife, but mainly birds and fish, because they are vibrant in color and they always teach her something new.

Though her large canvases have won the Lake Martin Living Art & Photography contest three times, Mimi Amerson does not think of herself as an artist.

“I consider myself more of an illustrator than an artist because I need a reference to work from. I need to see it,” said Amerson, who retired at Lake Martin with her husband, Larry, after a career in graphic design.

The Goats of Lake Martin, another large painting, took the People’s Choice award in 2018.

“I like birds and fish,” Amerson said. “I just really like the iridescence of the scales and feathers. And I like the palette of rust, brown and teals.”

Amerson first showed artistic talent in kindergarten. Her teacher then told Amerson’s mother that the child had a gift for art when the people in Amerson’s drawings showed perception.

“The other kids were drawing stick people, but mine had two lines for the necks,” Amerson said.

It was junior high school when she had her first opportunity to explore art, as that was the first school she attended that had an art program. In high school, she took private art lessons, and it was only natural that she undertook an art-oriented major when she entered college at the University of Georgia.

“I majored in graphic design because my father wanted me to be able to get a job when I finished college, and art was not a reliable major for finding employment,” Amerson explained. “Even with the graphic design degree, I couldn’t find a job right away. I sold cars for a while until I got on with the phone company – in advertising.”

She worked for several years as the art director at Wellborn Cabinet, Inc., in Ashland in the 1990s. But Larry had a job that took them out of the area until they returned when he retired; however, it was at the University of Georgia that Amerson developed her pencil work, starting with the addition of just a touch of colored pencil in her drawings. Before long, she was incorporating more color, and eventually, she converted to using colored pencils exclusively.

While living in the Dadeville area the first time, she took art lessons with Cheeko Douglas once a week with a group of other ladies.

“Those three hours every week with Cheeko were amazing,” she said.

To fuel her subject matter, Amerson visited a bird show in Montgomery and took photographs of egrets, cockatoos and blue herons. She works in a 25-square-foot corner of the living room in her condo and draws her subjects from the prints that she takes. Her paint cabinet is a converted portable bar, and these days, she uploads her photos onto an iPad, which better depicts the colors and dimensional effects of the wildlife.

“I also can enlarge the photos on the iPad to better see the details,” she explained as she used the technology to sketch the outline of an octopus on an aged nautical chart.

“I don’t like to do the backgrounds, so I’ve started putting the animals on charts. Larry and I lived on a sailboat for a while, and we used a lot of charts. I order them and soak them in tea to age them,” she said.

While she does not accept commissions, Amerson said she has started to sell some of her early works to make more room on the walls of the condominium.

“I don’t have any more space for the new things I am doing,” she said.

Her works are attractively on display throughout the home, with a bright orange octopus on a wall in a bathroom – one of her first pieces done on a map chart. She painted a fish on a palm frond that hangs above a door and another on an old board she found.

Recently, she began painting the graphics on large pine boards that Larry has cut in silhouettes of ocean-going fish, adding some details in the fins. She soon will start on a life-sized red snapper.

It takes about 400 hours to complete a colored pencil canvas of detailed birds. So, Amerson has started to paint her wildlife, which allows her to finish a piece inside of 100 hours. She uses a variety of craft paint colors in lieu of true artist-quality paints, she said.

“I like the colors,” said Amerson, who after using a collection of some 200 colored pencils appreciates the availability of a ready color spectrum without having to mix them herself.

She particularly enjoys painting birds and fish because she likes to learn about them.

“When you paint them, you learn a lot about them,” she said. “The anhinga has no oil on its wings, which is what allows other birds to come right out of the water and fly. The anhinga has to wait for its wings to dry before it can fly, so it perches on a branch with its wings open.

“When I painted the crabs that were in last year’s magazine art contest, I learned that crabs with red claws are female and those with blue claws are male.”

Looking forward to her next line of subjects, Amerson said she may turn to succulents, as their shapes, shallow spaces and graphics appeal to her.