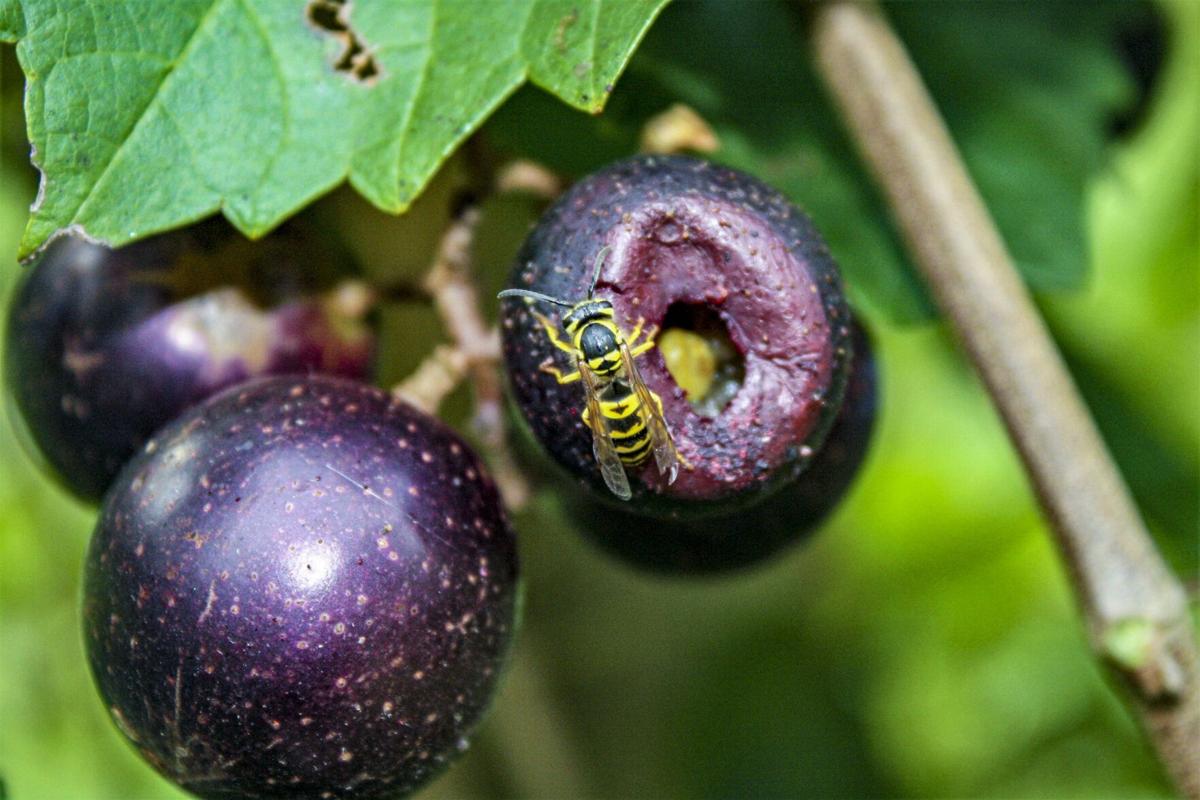 Yellow Jackets are attracted to sugar sources, like these ripening muscadines and open cans of soda. 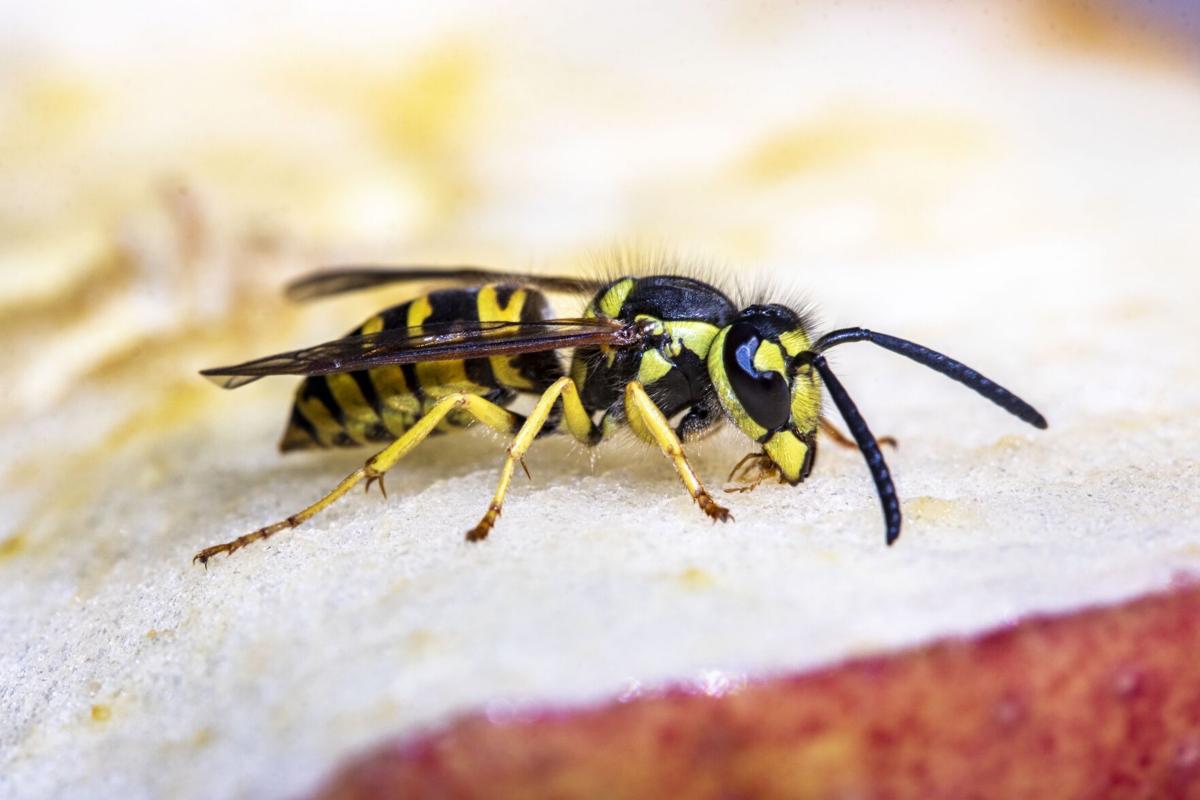 A worker Yellow Jacket forages on an apple. These wasps love sweets 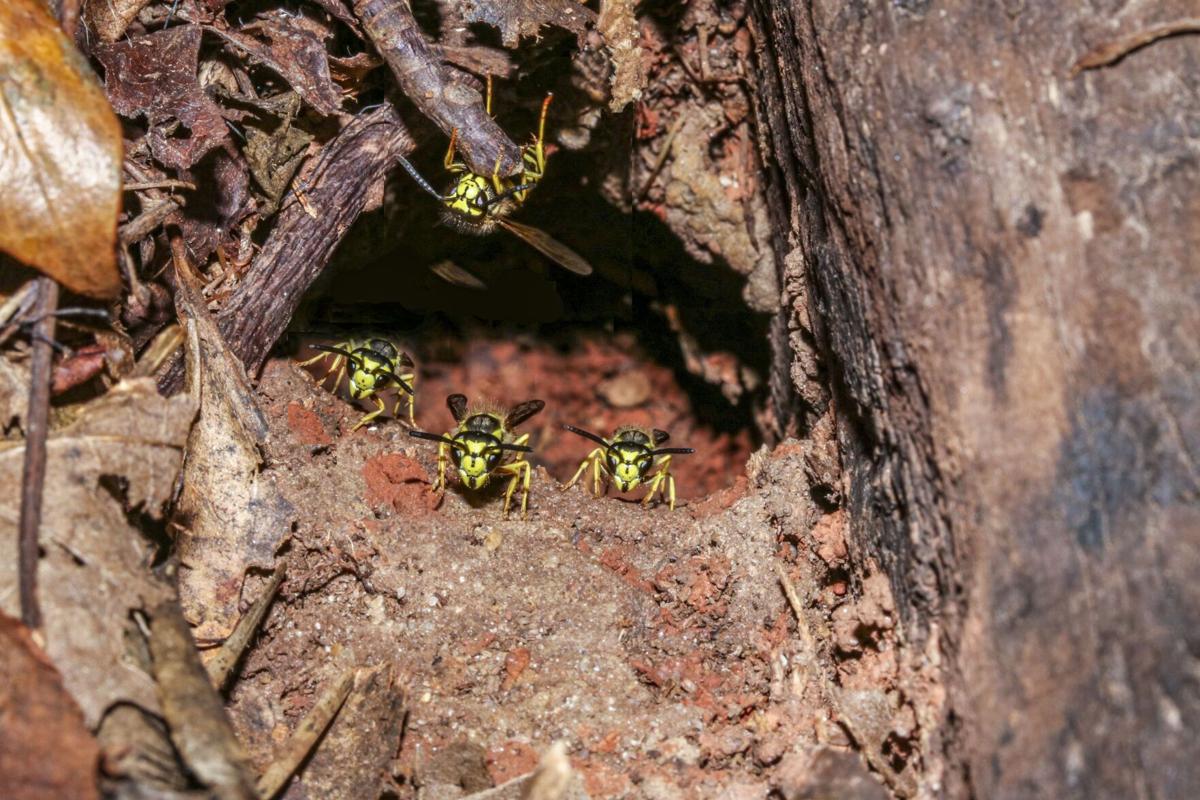 Stationed at the nest entrance, guard wasps will alert others inside when threatened.

Yellow Jackets are attracted to sugar sources, like these ripening muscadines and open cans of soda.

A worker Yellow Jacket forages on an apple. These wasps love sweets

Stationed at the nest entrance, guard wasps will alert others inside when threatened.

One insect that always gets everyone’s attention and newfound respect is the Yellow Jacket. Every year, people are stung by these little devils after unexpectedly and accidentally disturbing a nest while mowing lawns or fields. People also get stung in defense, simply as a warning shot to mean, “Back off, buddy,” when they’ve gotten too close to the nest.

Yet many people, who are simply minding their own business get stung by stray and curious Yellow Jackets. They swat at the nosy Yellow Jacket as means to communicate “Leave me alone,” but they get stung anyway because such action causes the insect to react aggressively and defensively. Getting stung by Yellow Jackets is not fun on any day.

In Alabama, there are two species of Yellow Jackets: the Eastern Yellow Jacket and the Southern Yellow Jacket. Both are about the size of a honeybee but are yellow with black markings, more slender and less hairy. Like honeybees, when their hives are disturbed, Yellow Jackets swarm out aggressively to sting whatever caused the disruption.

Unlike other wasps, Yellow Jackets are smaller and usually build their nests in cavities in the ground. The nests are usually shaped like large footballs and are made from paper. They have several tiers of combs, like honeycomb, with paper on the outside. The entrance to the nest is at the very bottom. Yellow Jackets are excellent predators of potential insect pests but can become a problem to humans.

The Yellow Jackets are well known for their defense weapon – the stinger. But unlike most insects, they are very aggressive and are always ready to attack. Yellow Jackets know how to sting and don’t mind delivering one that is very painful. They have smooth stingers, as opposed to the barbed stingers found on honeybees. These smooth stingers allow them to sting repeatedly.

Yellow Jackets generally attack in large numbers when disturbed because they are able to pinpoint the intruder. When the first Yellow Jacket stings, it tags the victim with an alarm pheromone (chemical odor) that may last for hours. Amazingly, this pheromone makes the victim a marked target for other Yellow Jackets to locate. This is why even a single sting can be dangerous and lead to more.

When stung by a Yellow Jacket, some people may react differently than others. One may experience immediate pain, localized swelling and redness. Another may experience a systemic reaction, such as respiratory problems, swelling beyond the sting, nausea, anaphylactic shock or even death in very rare instances. If you experience any dizziness, confusion, weeziness, shortness of breath, fainting or blackouts, see a physician immediately.

A few years ago, I was stung four times by Yellow Jackets while mowing grass. Let me attest that those little devils hurt. I’ve been stung before, but this time they got me good; the stings on my legs hurt and burned all night and into the next day. More recently, one got me on the thumb but only throbbed for about an hour.

Experts suggest being alert when outside playing in the yard or mowing grass. It is a known fact that the vibration from lawn mowers and tractors near or over their nests will cause Yellow Jackets to attack. When doing yardwork, wear protective clothes, including pants, shoes, gloves, a hat and possibly even a face mask or bee veil. One or two just curiously flying around you will not likely attack unless provoked, such as with swatting. Just be still for a few seconds and ignore it, as it probably would leave.

If you stumble onto a nest of Yellow Jackets near your home or in your yard, first determine whether or not they are a problem. If it is necessary to get rid of them, locate the nest during the day by watching them fly out, and mark its location. Yellow Jackets usually nest in the ground in old rodent burrows, tall grass, beneath landscape timbers and heavy mulch or in rock walls. They may also be found in the wall voids of homes.

To eliminate a Yellow Jacket nest, apply a liquid or dust insecticide labeled for Yellow Jacket control into the entrance hole of the nest. Do the control treatment very early in the morning before they emerge or, even better, at night when the Yellow Jackets are resting. Be sure not to shine a flashlight directly at the nest because you may startle the Yellow Jackets on guard and get stung.

Extension specialists recommend insecticidal dust products that contain carbaryl as the preferred treatment product. Hand dusters and air dusters are the more common applicators. When using a hand duster, puff the dust inside the opening of the nest and leave the treatment area immediately. It might be more effective to cover the nest opening with a large pan, brick or rock to trap the Yellow Jackets inside the nest until they die. Do not return to the area for at least 24 hours. The dusting process may need to be repeated about every three days until there are no more wasps coming out of it.

Aerosol insecticide sprays also are recommended for control of Yellow Jackets but may not eliminate the entire colony. Such products are sold in ready-to-use pressurized containers, described as some sort of wasp and hornet killer, and will spray the insecticide up to 22 feet.  Some common brands are Hot Shot, Raid, Spectricide and Ortho.

Keep in mind that the Yellow Jackets will become very aggressive once disturbed. For difficult or severe Yellow Jacket problems, call a pest control professional.

Lastly, keep in mind that Yellow Jackets are attracted to sugar sources, such as berries, ripening fruit and flower nectars. This becomes a problem when the sugar source is a food or drink being consumed by a human.

In addition, as fall approaches and the weather becomes cooler, people tend to spend more time outdoors. Hungry and desperate Yellow Jackets will not hesitate to feed on picnic foods, over-ripe fruit and sodas to fulfill their dietary needs for protein and carbohydrates. Where there is food and drinks, so are Yellow Jackets. They can also be found around dumpsters and trashcans at public facilities. Yellow Jackets love sweets, just like kids, so they can sometimes cause a problem where food and children are both present, such as school playgrounds.

By late summer and fall, the population of Yellow Jackets could be quite high. Combine that with fewer available natural food sources and unfavorable weather conditions, and you have unhappy and hungry Yellow Jackets. It is those foraging, food seeking Yellow Jackets that tend to become more of a problem to humans.

The best strategy against Yellow Jackets, if at all possible, is to just leave them alone. In a colony, they may out-number a person 5,000 to 1. Remember they all are female, moody, armed and set to come sting you. The odds are not in your favor.

Shane Harris is the County Extension Coordinator for Tallapoosa County.

By the time July and the summer time heat rolls in, less fanfare is given to flowering plants.  Maybe it is because attention is on summer rec…