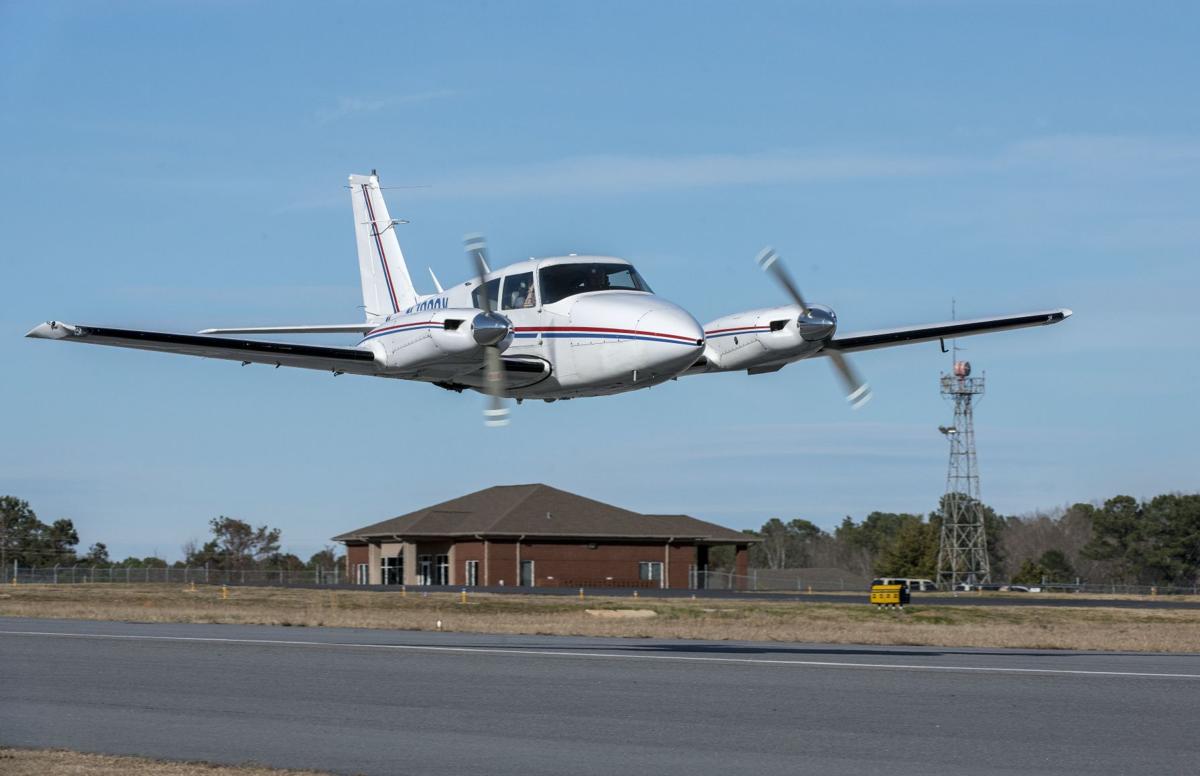 A Twin Comanche flies low as its pilot prepares to land at Thomas C. Russell airport. 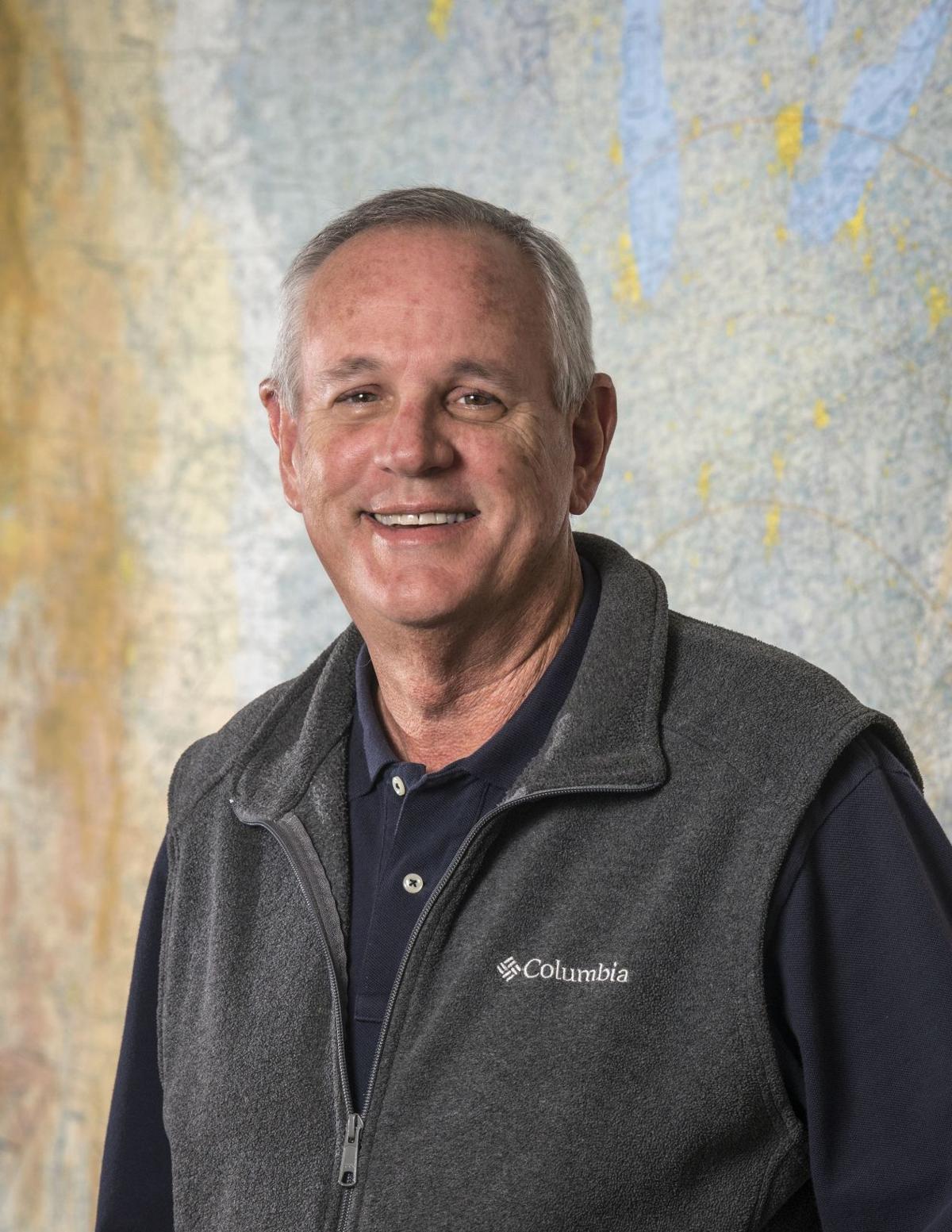 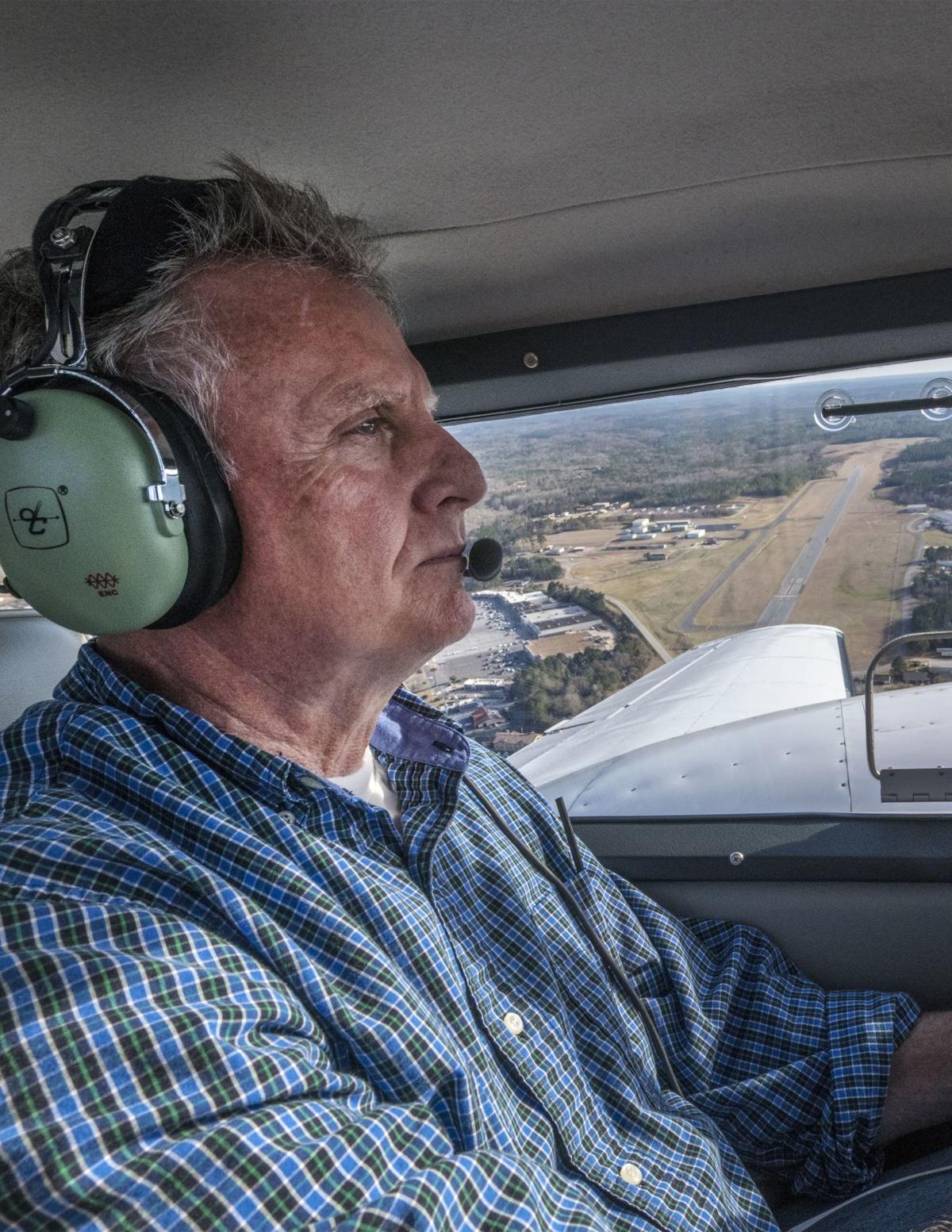 George Kretschmann, who stores his Twin Comanche at a hangar on site, flies over Alexander City. 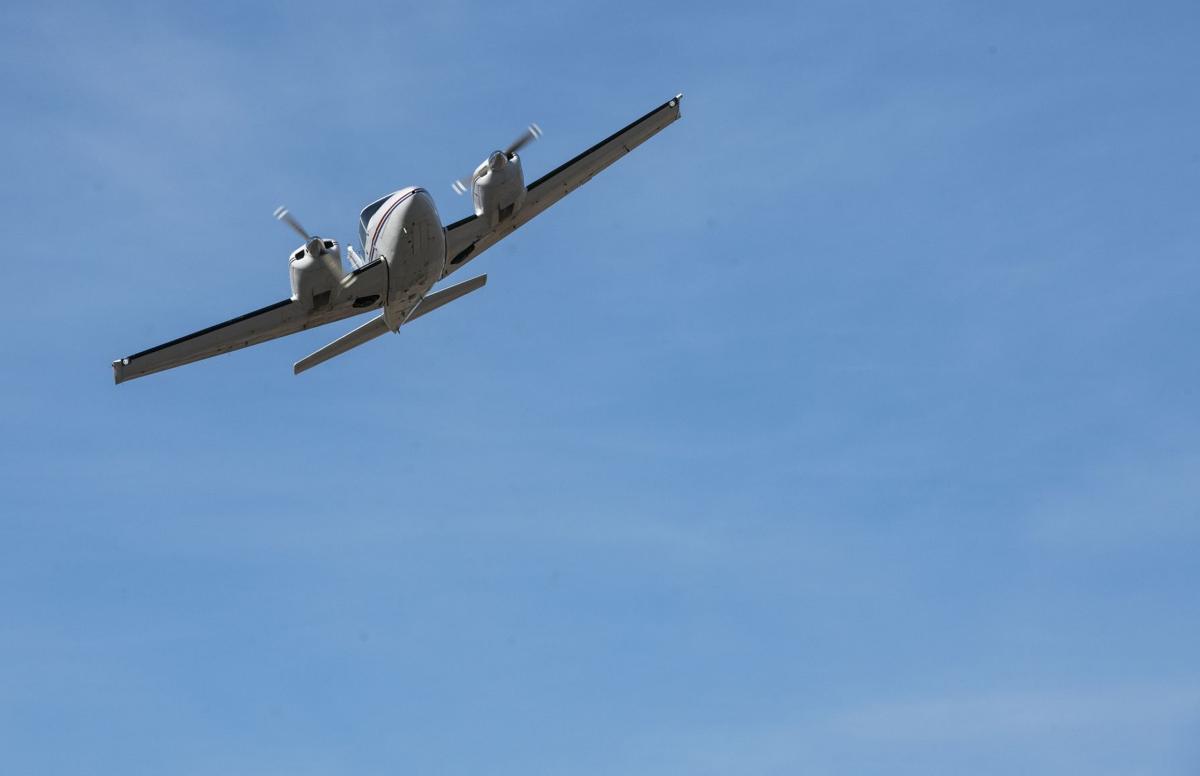 A plane takes off on a clear day, which is ideal for flying. 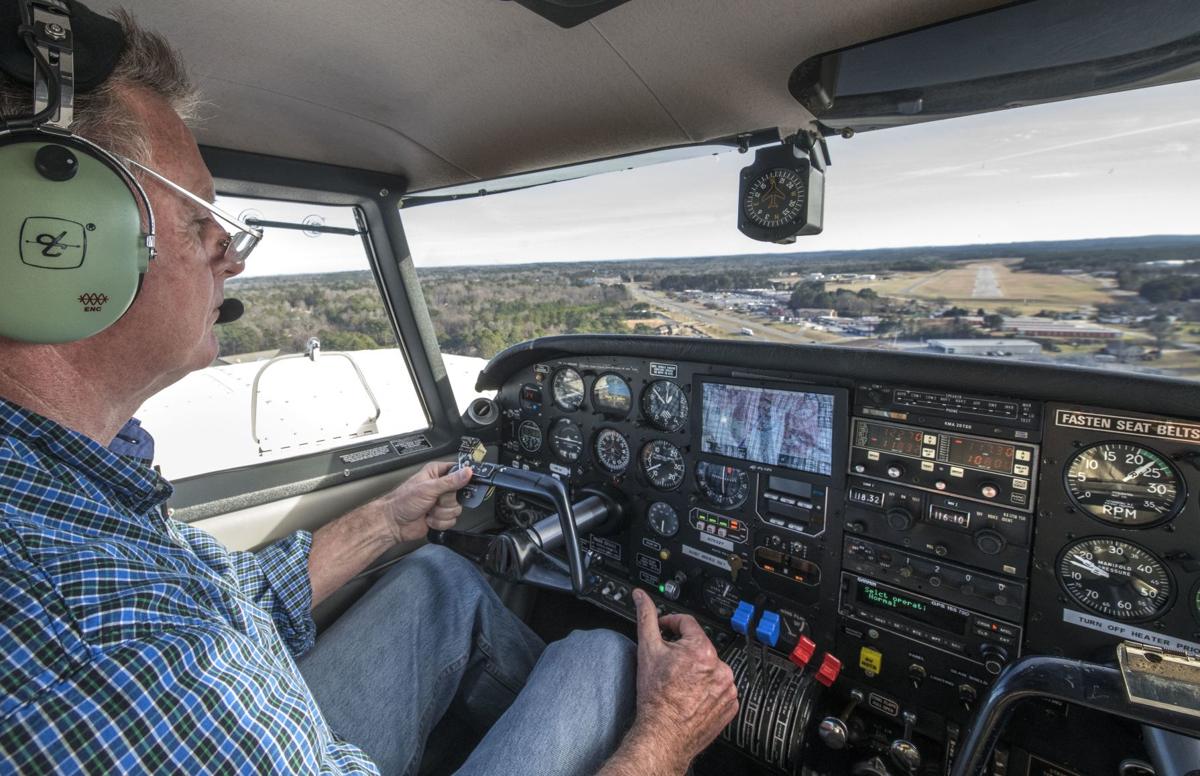 Kretschmann holds a private pilot license as well as an instrument rating certification.

A Twin Comanche flies low as its pilot prepares to land at Thomas C. Russell airport.

George Kretschmann, who stores his Twin Comanche at a hangar on site, flies over Alexander City.

A plane takes off on a clear day, which is ideal for flying.

Kretschmann holds a private pilot license as well as an instrument rating certification.

Though he left the area in 1978, native Jackson Hatton moved home nearly two decades ago and recently landed his dream job as airport manager at Thomas C. Russell Field.

“I have a great view, especially with the afternoon sunset,” said Hatton. “I like being around the airport and talking to the pilots. I used to spend time here anyway, so now I get paid to do it.”

Hatton has had a passion for airplanes since he was 4 years old and said he is honored to fill this position after Mike Smith retired last year. A lot has changed since Hatton received his private pilot license in 1978, and he upped his qualifications in 2010 when he received an instrument rating certification.

“The hardest and most rewarding thing I’ve ever done in my life was getting that instrument rating certification,” said Hatton.

While the requirements for a private pilot license are a bit more flexible, instrument rating flying relies solely on the tools within the plane to fly when visual references are not an option.

“The No. 1 killer for visual flight rules pilots is instrument meteorological conditions,” said Hatton. “In other words, if you can’t see, you shouldn’t be flying, unless you can fly instruments.”

As an overview, a minimum of 40 hours of flying time is required to earn a private pilot license – 20 hours with an instructor and 20 hours flying solo.

“It takes time and commitment,” said Hatton. “You also have to do ground school, either self-study or with an instructor.”

While someone can technically begin flying at any age, he or she cannot fly solo until 16 years old and can’t certify for the private license until 17 years old. The pilot-in-training has to meet all requirements, and an authorized instructor must sign off on the completed course before he or she could take the FAA-administered written test.

“Then there is an oral exam on everything you’ve learned, and you also have to get signed off to do a private pilot check ride,” said Hatton. “In all essence, a private license is a license to learn. You get to go fly, take trips and learn real working flying.”

Personal responsibility and safety are essential elements to becoming a pilot, as well.

“Being a pilot is about knowing when you can and can’t fly due to weather conditions,” said Hatton.

That is where instrument rating comes in, and a private pilot learns to operate the plane using the cockpit instruments.

To obtain an instrument-rating certification, someone must already have a current private pilot license or be concurrently applying for one. He or she must log hours of flight time, instrument time and training with an authorized instructor, along with ground study.

“You really have to stay proficient on flying with instruments because you are relying on them completely when you cannot see,” said Hatton.

The FAA recommends someone with an instrument rating certificate to practice six approaches and holds every six months, at a minimum.

An outside flight instructor provides private lessons at the Alexander City airport and stores one training plane on site, along with a flight simulator. The Southern Preparatory Academy’s aviation students also use the airport for training.

Thomas C. Russell Field is a city-owned airport on 300 acres of property. The airport sees nearly 30 jets fly in and out each month.

Currently, all the hangars on site are in use – some privately owned, some city owned and some corporate hangars. Even the older ones from the ’60s, which will be refurbished this year, are in use.

“We have area for new private hangars and city-owned hangars to be built,” said Hatton.

There is a fuel truck on site to provide Jet A fuel and a self-serve Avgas station for piston-powered planes. When planes fly in, there are areas to park or tie down, and Hatton recently implemented rates for parked planes.

Hatton is a one-man show at the airport, so he juggles administrative work, scheduling incoming planes, maintenance of the facility and more.

“I’m hoping to hire a part-time person soon to help out,” he said.

The city has contracted Robinson Iron to construct cast iron archway signs to be seen when coming in and leaving the airport: one that says ‘Welcome to Alexander City’ and one that says ‘Thomas C. Russell Field.’

“This is a great airport,” said Hatton. “It has good approaches; easy to get in and out of; nearby controllers are helpful; we have a nice runway; and it’s not too crowded.”

Hatton hopes to share that love with others that fly in to Alexander City.

“This is the first thing they see of the town when they come in to this airport, so it’s a great gateway,” said Hatton. “The city has some pretty good plans, and I just want to make sure those are enhanced for the people coming in to the airport as well.”