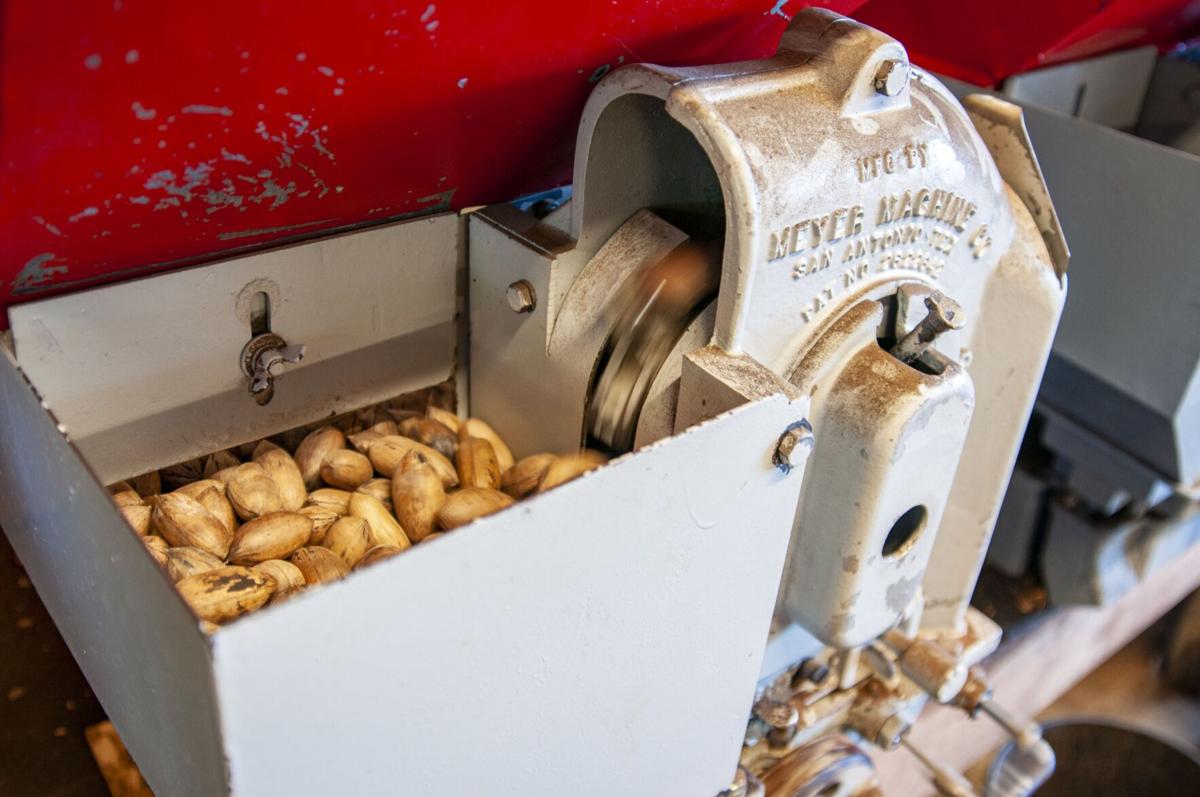 Crackers are always running at the pecan store. 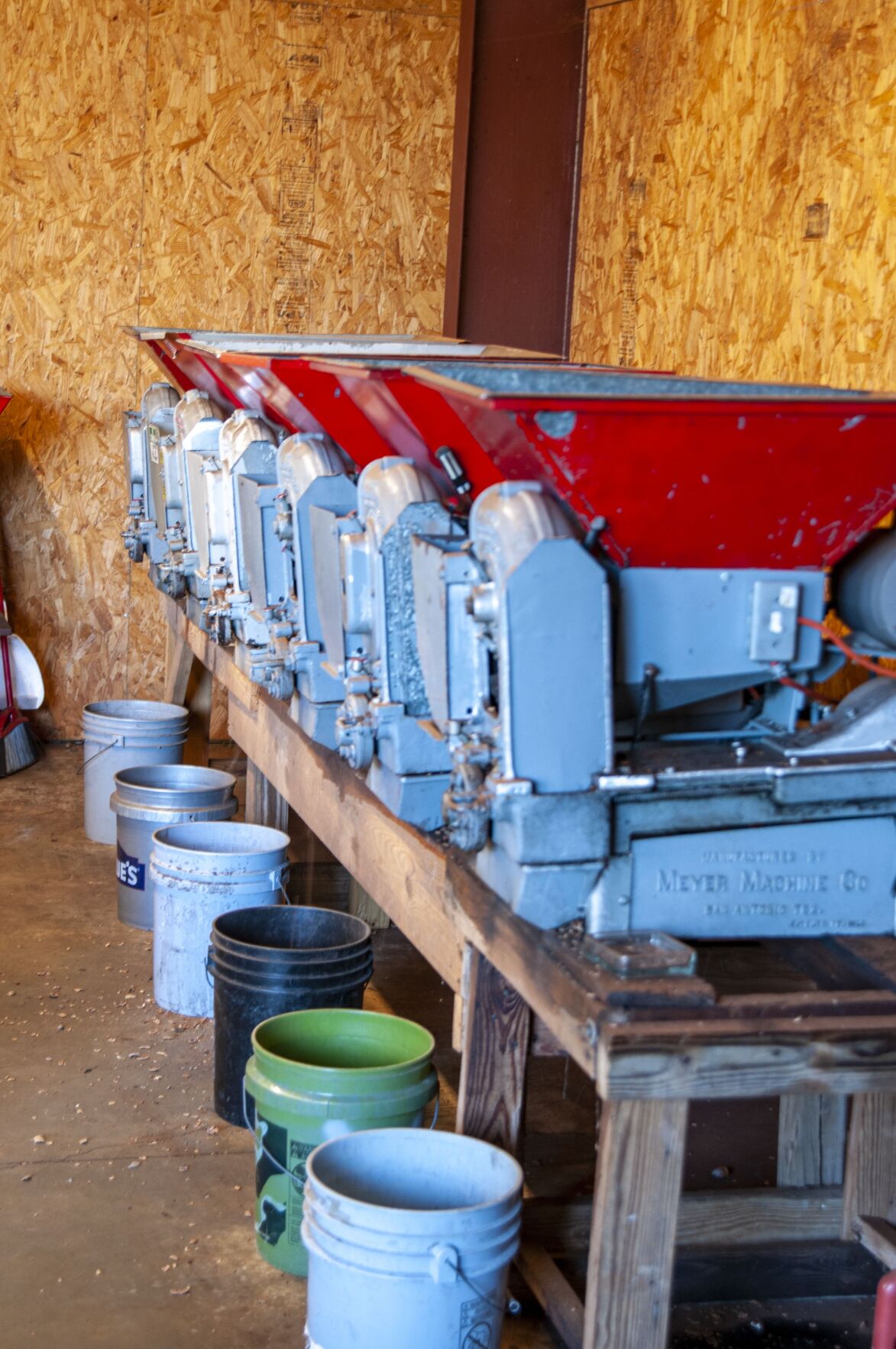 The assembly line of crackers runs all day 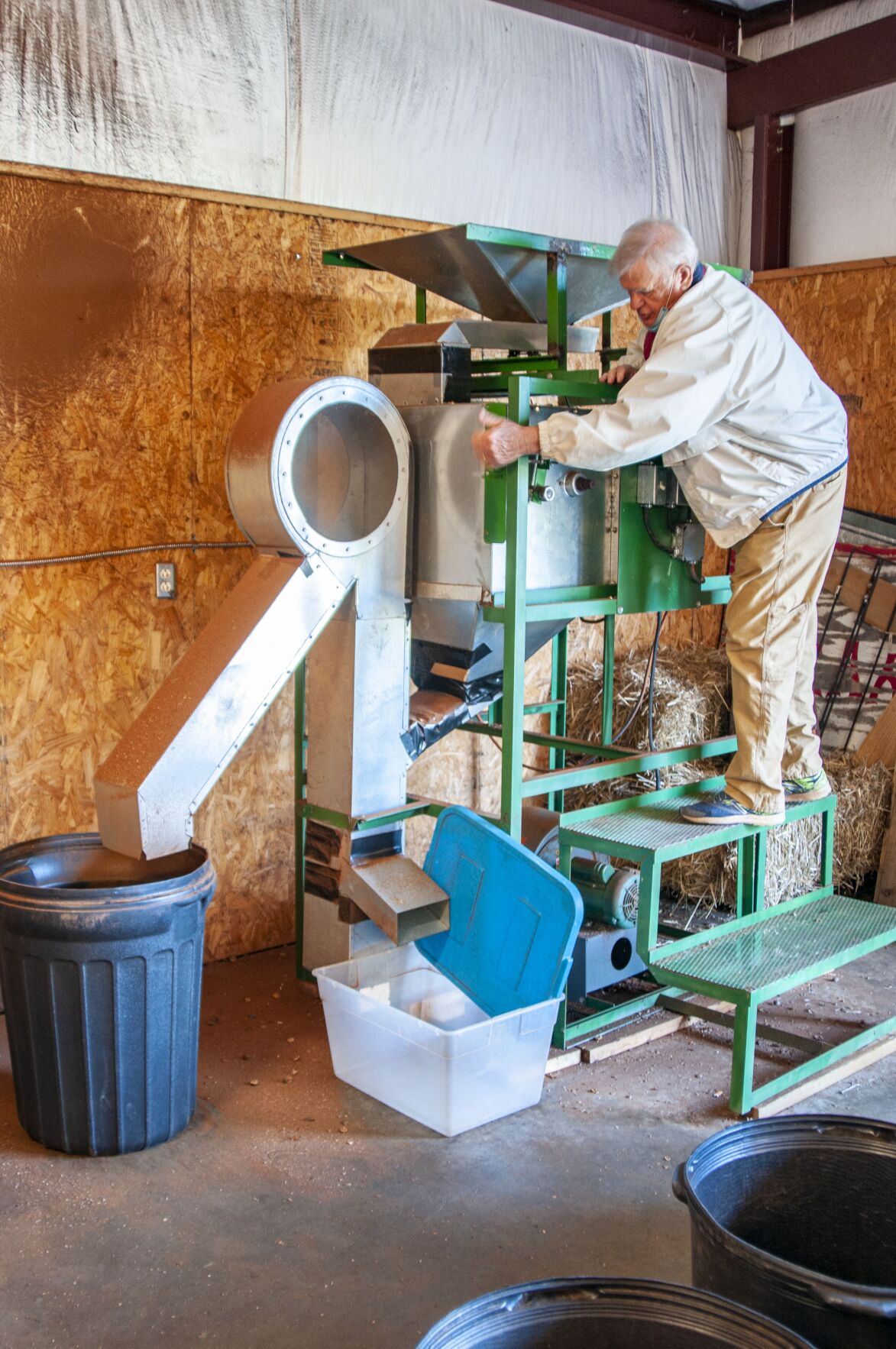 Jennings is running a customer's cracked pecans through the sheller 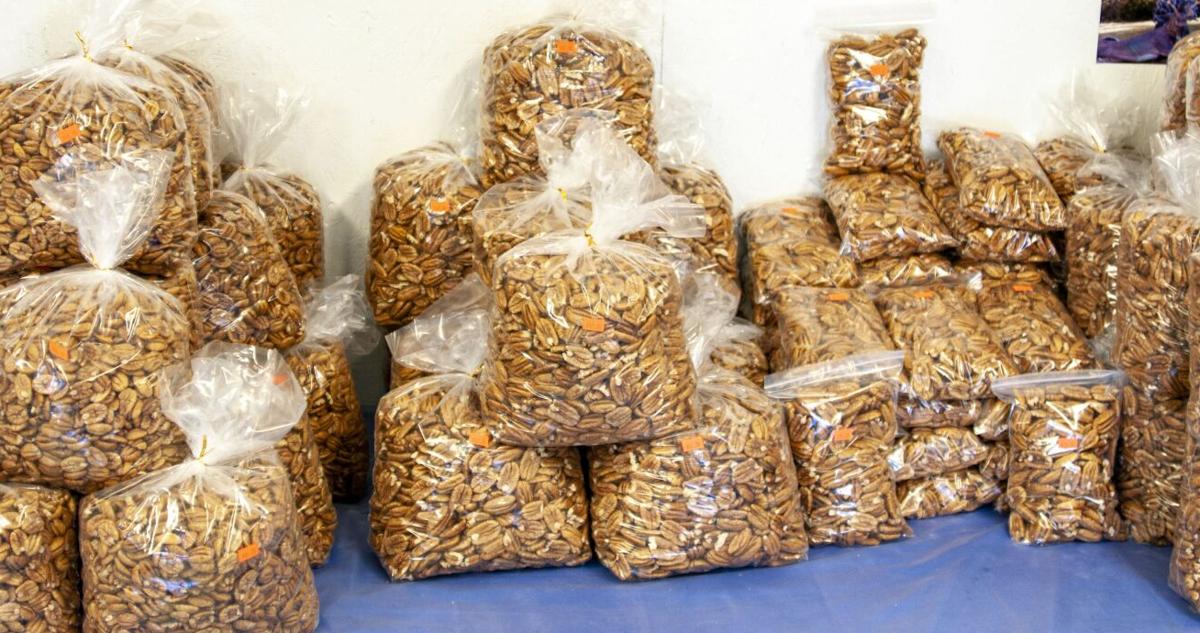 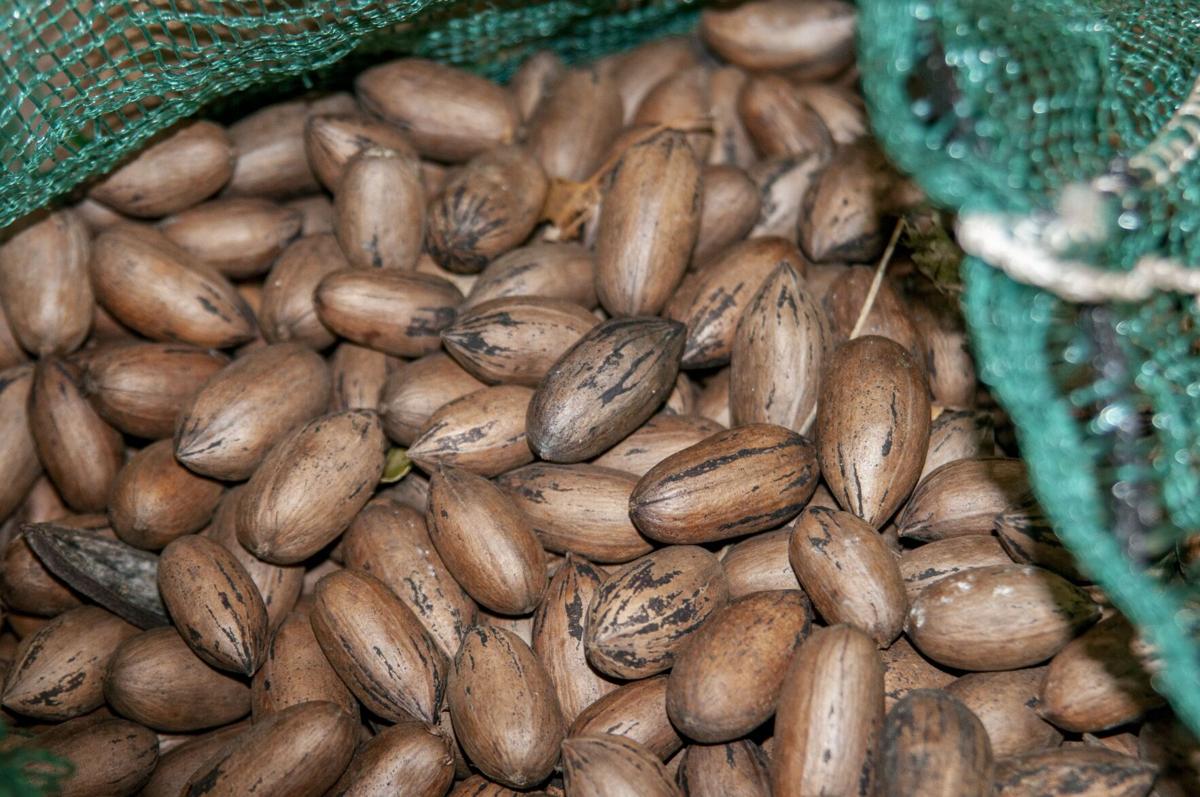 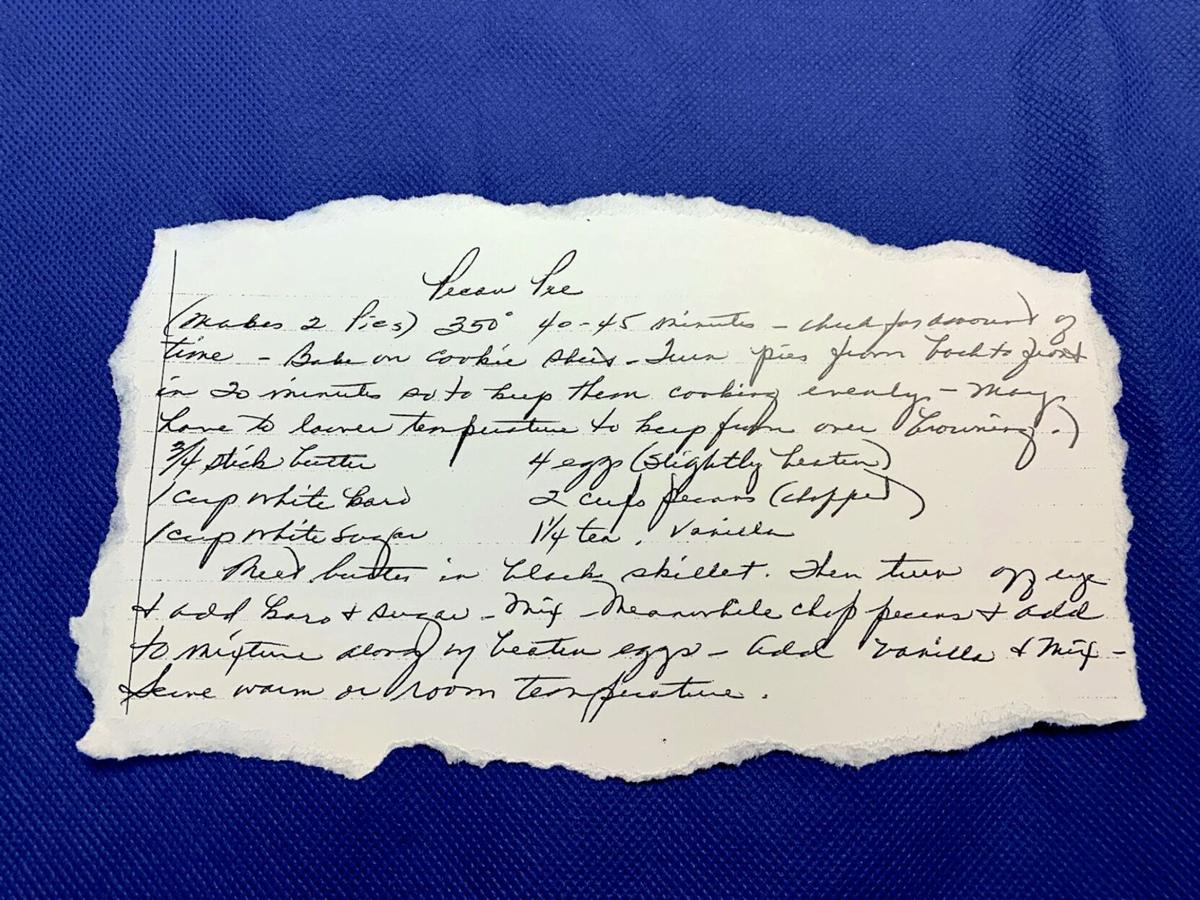 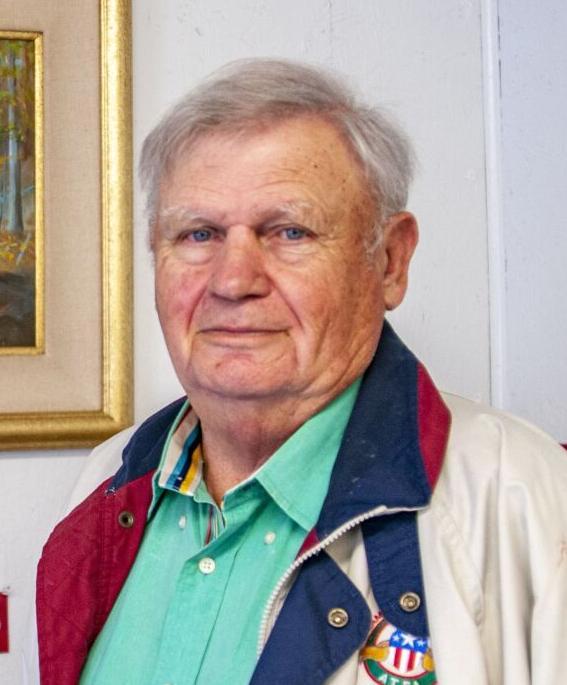 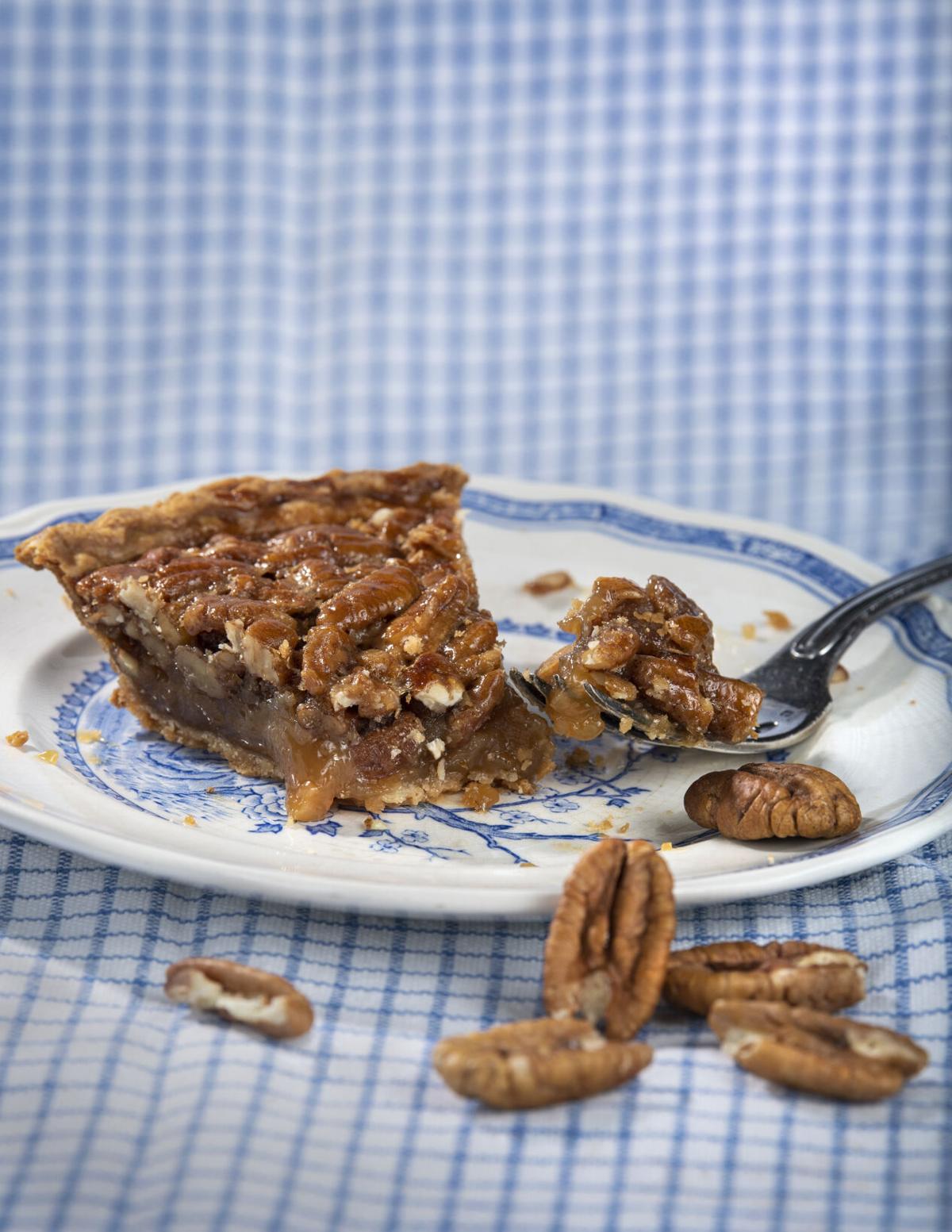 Pecans have been a staple in Bobby Jennings’ life for the last 60 years, but the secret recipe that his family decided to share has been around for generations. The Langley-Sharman-Jennings Pecan Pie recipe is said to be creamy and delicious; a divine secret recipe to note - and now, it’s yours as well.

Crackers are always running at the pecan store.

The assembly line of crackers runs all day

Jennings is running a customer's cracked pecans through the sheller

Pecans have been a staple in Bobby Jennings’ life for the last 60 years, but the secret recipe that his family decided to share has been around for generations. The Langley-Sharman-Jennings Pecan Pie recipe is said to be creamy and delicious; a divine secret recipe to note - and now, it’s yours as well.

How do you pronounce the word “pecan?” Some say, “PEE-can” or “PEE-con” while others pronounce it “puh-CAN” or “puh-CON.” According to Bobby Jennings from the Lake Martin Pecan Company, the proper pronunciation is “puh-CON.”

Jennings has owned and operated the Lake Martin Pecan Company, originally named the Camp Hill Pecan Company, since 1960 when he began his first season buying, selling and cracking pecans.

The inspiration to buy and sell pecans came shortly after Jennings returned home from the military and enrolled at Auburn University. When his long-time neighbor, Will Yancey, who had bought pecans for years, passed away, Jennings decided to take up the stead in Yancey’s absence.

“I could buy pecans in the barn behind my family’s house,” said Jennings.

In those days, people had a world of pecans around Camp Hill and Dadeville, said Jennings. People brought in hundreds of pounds – even a ton – to sell.

The agricultural environment is market-driven which can affect buying prices for pecans. These prices fluctuate according to quality and type of pecan.

“I really bought a lot of pecans. I would transport them to Albany, Georgia, to the shellers in a trailer truck,” Jennings said.

He decided it was time to expand his ideas around the pecan business and begin cracking pecans for the public. He bought an old cracker from San Antonio, Texas, for $600 and moved his business from the back of his family’s barn to the old post office in Camp Hill.

“Not long after that, my daddy built a little Texaco station on Old 280 in Camp Hill, and of course, we kept the cracker, and we started buying pecans over there,” he said.

At the time, Jennings was working for the USDA, and while he was on the road, his daddy ran the business, selling and buying pecans from the Texaco station. Jennings came home on the weekends, sacked pecans and loaded them out on Sundays in transfer trucks.

“We’d sack them, sew them and send them to Albany, Georgia, on trucks 100 and 200 sacks at the time. We sold them wholesale to the candy company,” he explained.

After he retired from the USDA in 1994, Jennings purchased 5 acres of property on U.S. Highway 280 between Dadeville and Camp Hill where he built the Lake Martin Pecan Company. By then, he had accumulated several crackers, and people in the community brought in their pecans to sell or they came to get them cracked.

“If we cleaned them by hand, that takes time,” said Jennings. “So, we got a blower. The blower cleans the pecans, but there will always be a bit of debris that needs to be cleaned away, even after the blower has done its job.”

But today, not everyone who comes to Lake Martin Pecan Company comes to have his or her pecans bought, cracked or blown. Jennings has handed the company to his son, Mike, who retired from the USDA in 2015. While Jennings still spends most of his days at the store during season, he relishes the fact that Mike now runs the store.

“This all started in 1959 as an idea, a part-time seasonal thing for me, just during the pecan season. But in 2020, Mike expanded it into a year-round business,” Jennings said.

Throughout the decades, Jennings wife, Marilyn, and their daughter, Camey, have also enjoyed meeting people at the pecan company as well as packaging and selling the nuts.

He credits Mike’s wife, Bethany, for expanding the assortment of nuts and other products.

“She has merchandised and got everything looking good out in the storefront,” Jennings said. “And that’s good because there used to be a lot of pecans around, but now there’s not – people have died, farms have grown up; lots have grown up. I’ve seen a big decline in the number of pecans that we buy. So, having an assortment, that’s a good thing.”

Bethany has a Masters in Business from Auburn University and is in her 10th pecan season at the store. She uses her knowledge of business to expand the company while Mike broadens the availability of other products, such as syrup, local honey, assorted nuts, and, in the spring and summer, fresh fruit.

“This past spring and summer he would sell fruits. Sometimes, he would go to the Atlanta Farmers Market early in the morning and bring back a load. He sold cantaloupes, peaches and watermelons,” Bethany said.

Jennings used to open the store at the end of October and close it sometime in January; then, he would shut down shop. Since Mike and Bethany have taken over, Lake Martin Pecan Company now remains open for the majority of the year, selling seasonal fruits and other goods through the spring and summer and transitioning to pecan season in September

Jennings loves meeting his customers – past, present and future – from all areas of the U.S. as they pause their U.S. Highway 280 travel to visit the pecan company.

“To me, the most rewarding part of this little business is the people that I’ve met over the years,” said Jennings.

When requested by their customers, Lake Martin Pecan ships nuts within the continental U.S. For further information, call 256-896-4011.

Make or purchase two piecrusts. Pre-heat the oven to 350 degrees.

Melt butter in a skillet. Then turn remove from heat and add bars and sugar – mix together. Chop pecans and add to mixture, along with beaten eggs. Add vanilla and mix.

Pour filling into piecrusts and bake on cookie sheets at 350 degrees for 40 to 45 minutes. Turn pies from back to front every 20 minutes to keep them cooking evenly.

*May have to lower temperature to keep from over-browning.