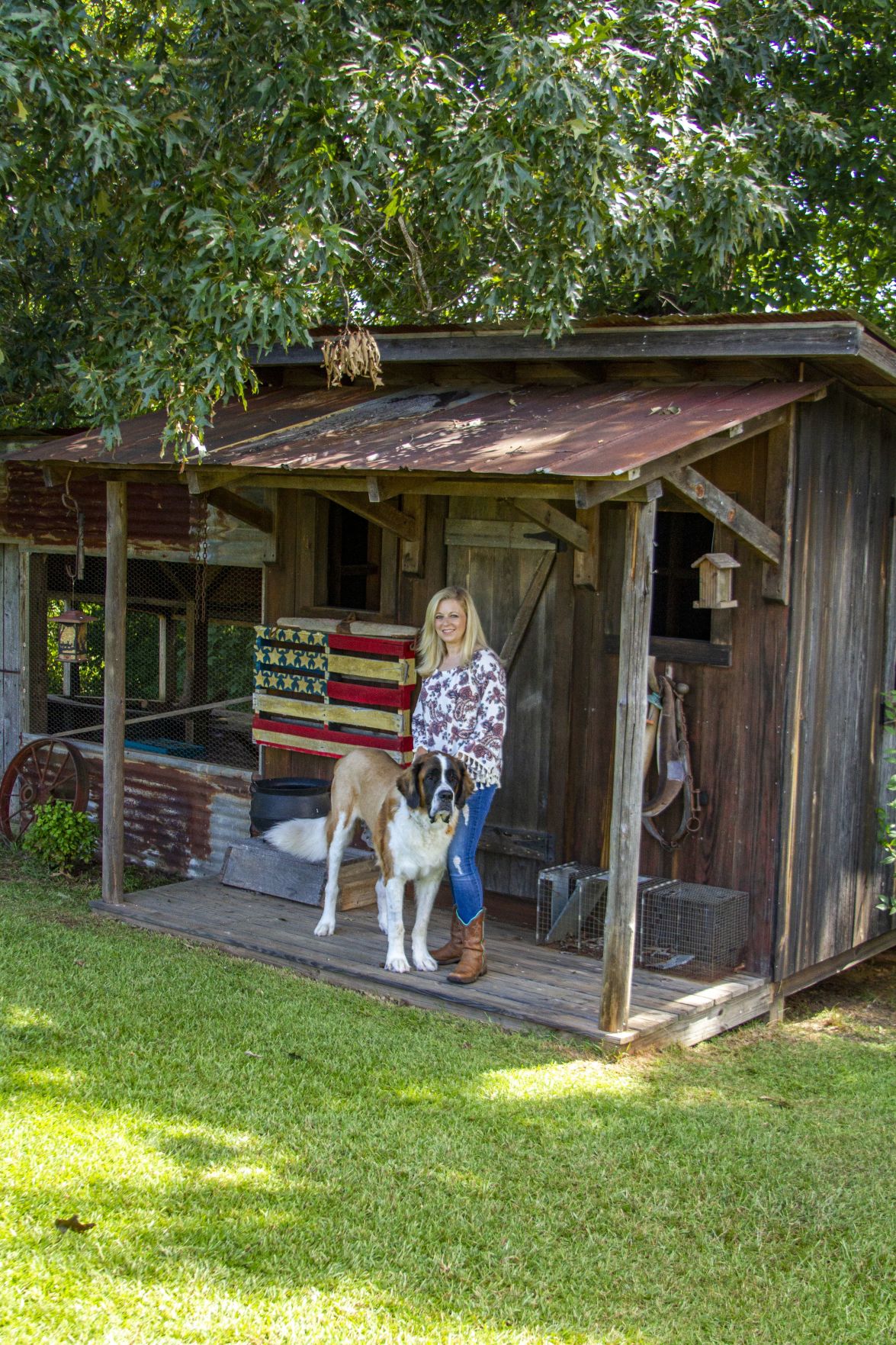 Melissa Haggerty rescued the St. Bernard Beethoven, pictured here after a knee surgery, and nursed him back to health. 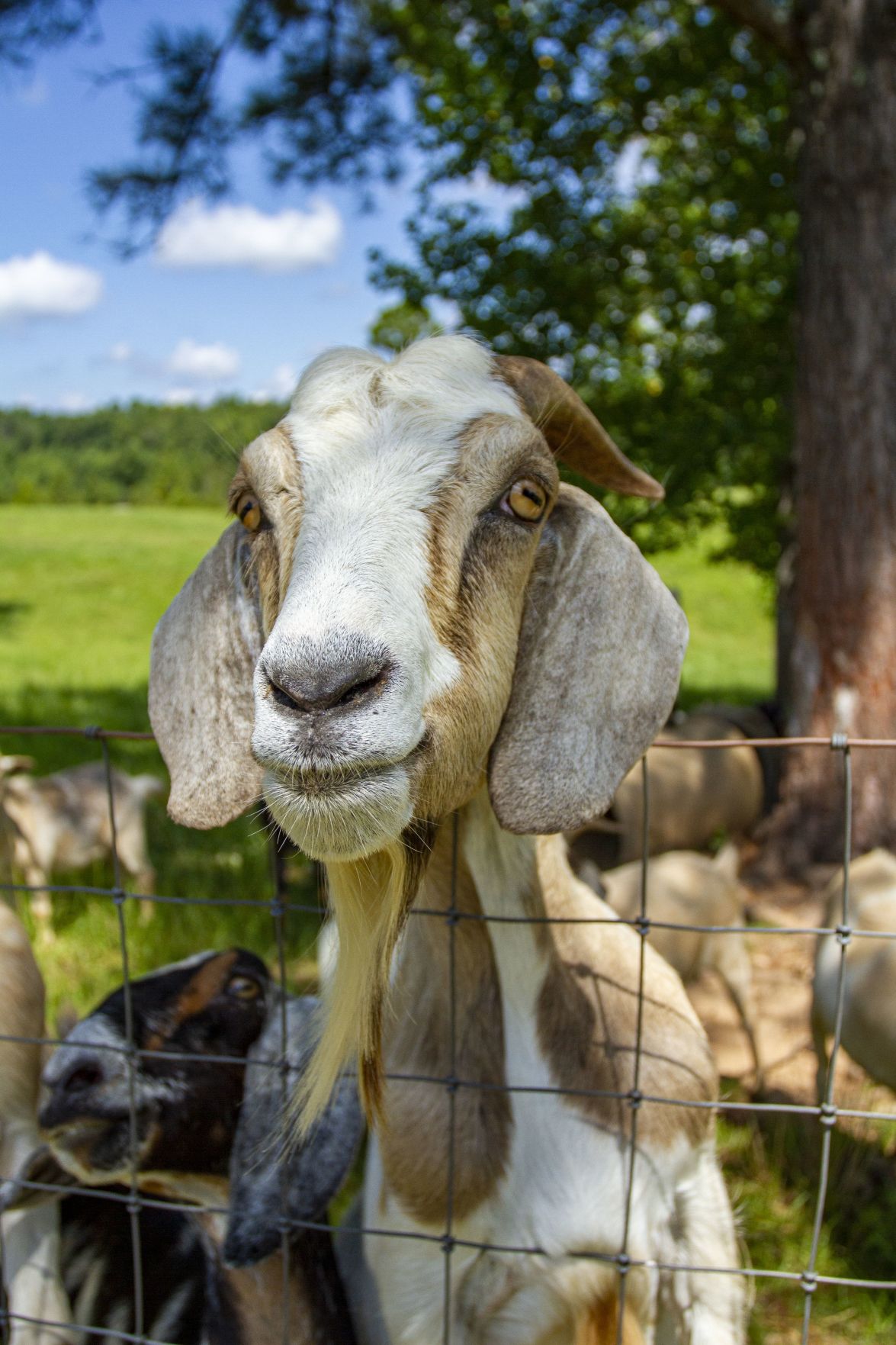 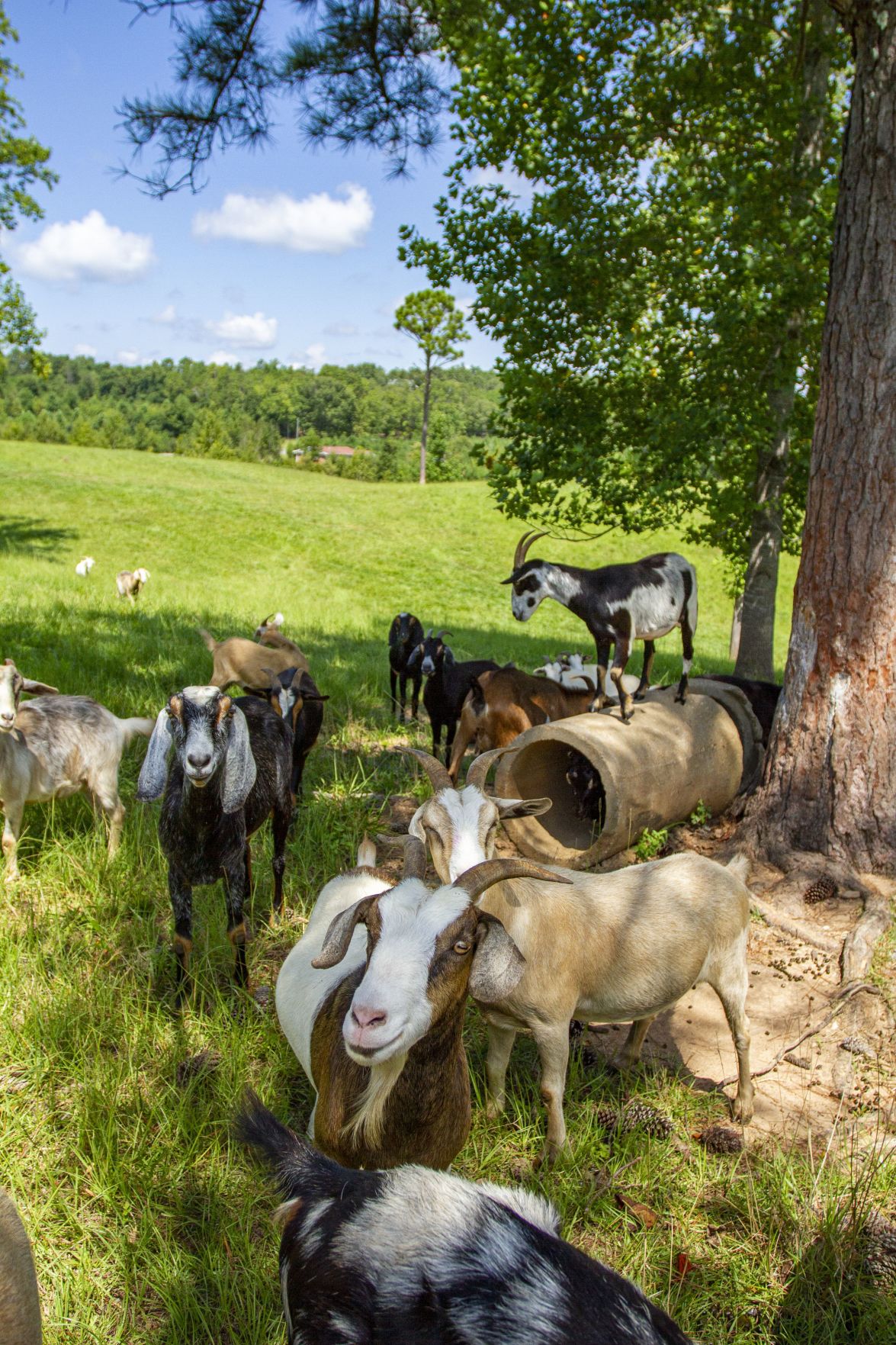 The goats love to eat 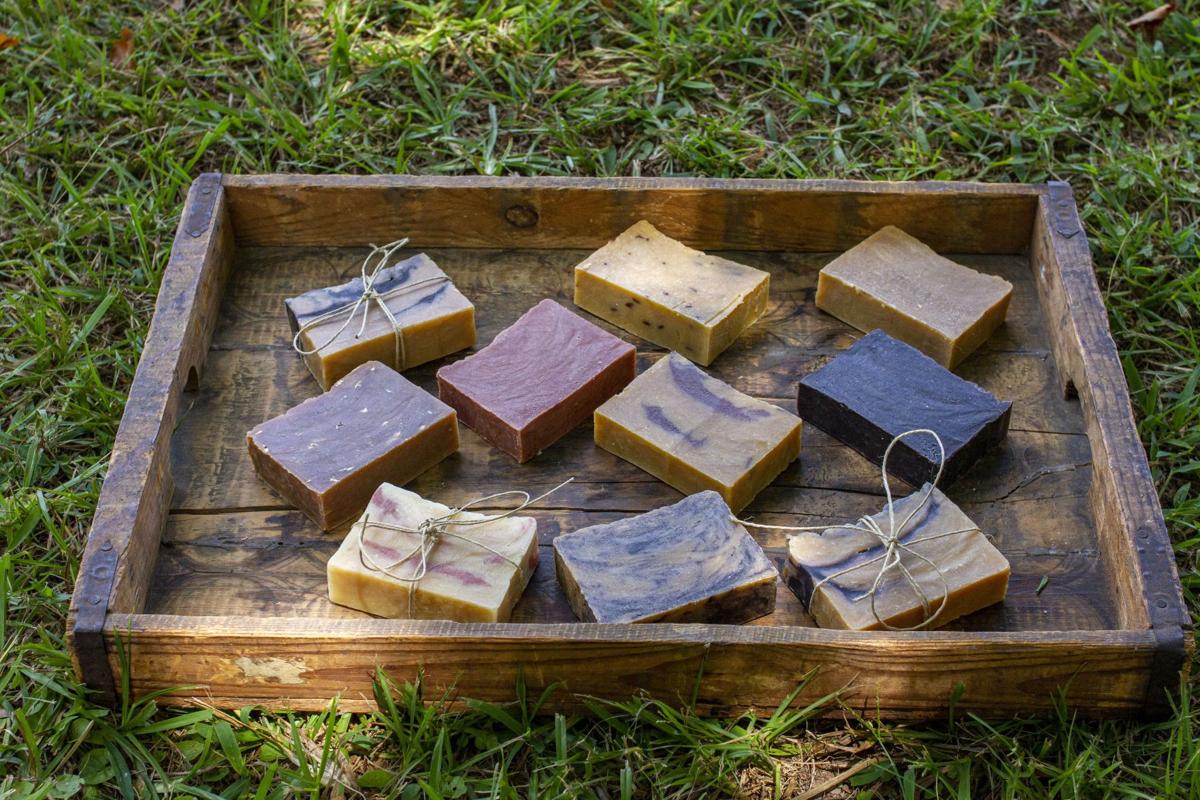 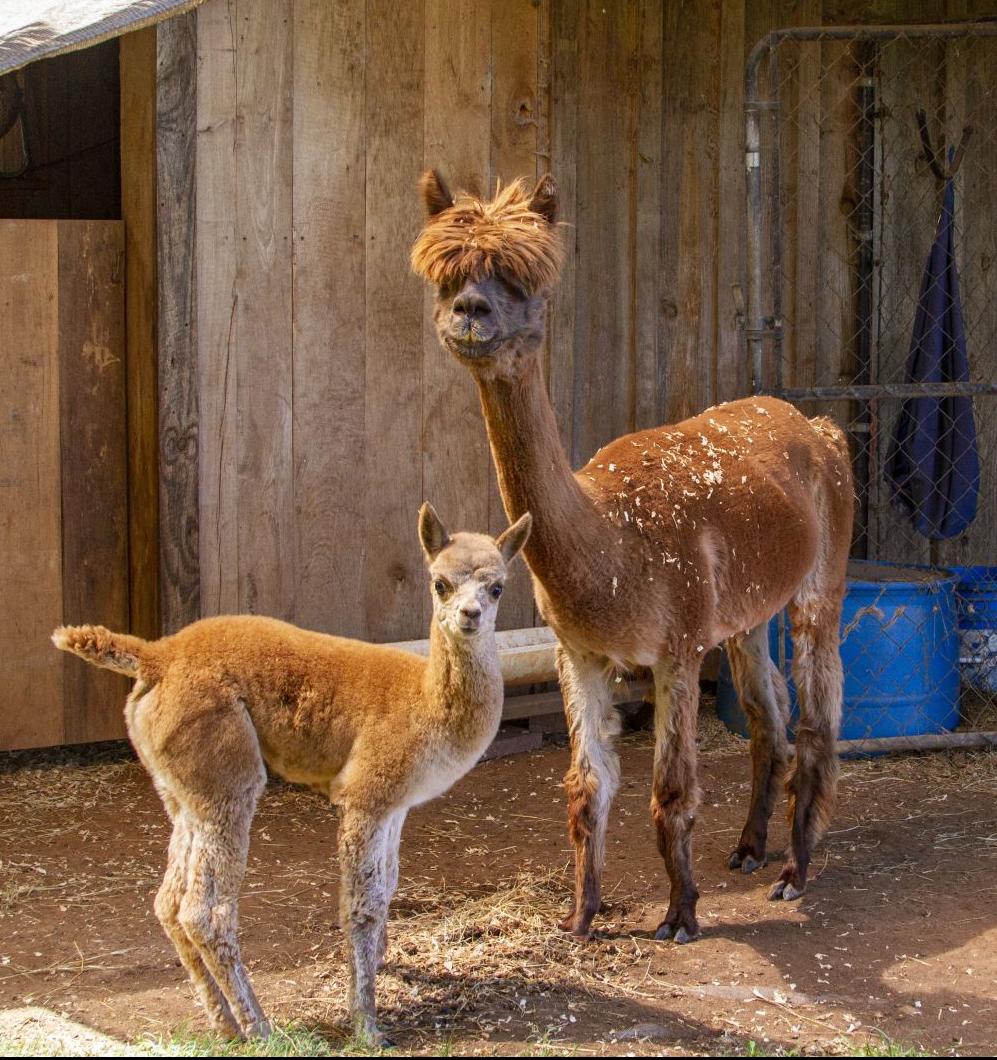 Eliana (right) had a yearlong pregnancy before giving birth to Legacy (left). 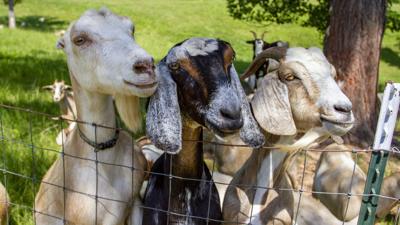 Melissa Haggerty rescued the St. Bernard Beethoven, pictured here after a knee surgery, and nursed him back to health.

The goats love to eat

Eliana (right) had a yearlong pregnancy before giving birth to Legacy (left).

Melissa and Mike Haggerty have found their own piece of paradise on roughly 40 acres of lush, rolling farmland in Jackson’s Gap. Home to a large variety of goats, two alpacas, some quail and 10 rescued dogs, Haggerty Hills Farm is not only the couple’s refuge but a beautiful haven for their animals.

Melissa, an Alexander City native, and Dadeville native Mike, married in 1994 and moved to the farm the next year. Over the years, they built a house, fenced pastures and made an animal sanctuary but have had very little time away.

“We do not have children, but all these animals are our babies. I don’t trust them with just anyone. I have a great friend who will occasionally come over so we can make a weekend getaway. We took a trip back in 2007 but really haven’t been able to since. The farm is truly a time commitment,” Haggerty said.

Over the years, the Haggertys have raised chickens and pigs, but they are happy with their current “little zoo,” as they call it. Mike is the supervisor at White Acres Farm in Camp Hill, a job that requires many hours of his time, so Haggerty takes care of most of the land maintenance and animal care in Jackson’s Gap.

The couple rescued two adult male alpacas in 2016, and one passed away six months later. In February 2017, a female, Eliana, was purchased from Southern Star in Alexander City. Outlaw, the other rescued male, sadly passed away this past April. Eliana gave birth to Outlaw’s offspring, Legacy, on July 10, 2019, after a little over a year-long pregnancy.

“When she went into labor, I sat with her for hours and checked on her throughout the night. When I came back in the early morning, there they were, just like a perfect picture,” Haggerty said.

Eliana is gentle with her owner, even taking an apple directly from her mouth. Alpacas tend to kick with strong back legs if they need to create a little personal space. At just 1 month old, Legacy has that kicking skill, but Haggerty intends to slowly halter train and break his bad habits. The baby nursed for about 6 months, but he was already eating grass and hay one month after being born.

“I take them to Southern Star to be shorn in April before it gets too hot. I’ve kept the entirety of sheared fleece to have it professionally cleaned and spun. I would love to have a blanket made one day,” she said.

All of the pair’s dogs have been rescued from different places, even on the road near the farm. If they find a dog, the Haggertys first take it to the vet to be checked for a microchip, so they could return the dog to its owner, if possible; however, this rarely happens. This also allows them to check on any issues the animals may have that might need to be addressed in order to nurse them back to health.

Their St. Bernard, Beethoven, showed up at White Acres Farm in the summer of 2018 weighing only 112 pounds and covered with tar, probably from roaming up and down the highway. The animal-loving duo decided to take him in, and he now weighs 175 pounds. A knee surgery with a very lengthy recovery added a bit of stress – since the Haggertys could not carry him in and out of the house – but they added a ramp to the front porch, and Beethoven is now doing well.

“We also have a menagerie of other rescued dogs – one we jokingly believe to be part possum. They each have their own personalities, so there’s never a dull moment at Haggertys’ House of Paws,” she said.

In March 2012, the Haggertys survived a devastating tornado. The pastures they have now were forests then, stripped of every tree. She is still haunted by that night – a pine tree in the kitchen; glass everywhere; and no one could reach them until the next day, but they survived. Haggerty said her husband has done so much work since then to get them to where they are today.

In 2014, after clean up and repairs from the natural disaster, the Haggertys started goat farming. A variety of breeds now graze in their pasture – Nubian, LaMancha and brush/Boer-cross.

The pets will come from the center of the field over to the fence when they are called. The goats know this means it’s time to eat, which is pretty much all they ever care to do. Some of these animals were purchased; some were gifts; and some Haggerty saved either from slaughter or from people who just didn’t want them anymore. She does not breed or milk her goats, but she nurses them back to a manageable state and can call each one by name.

“Lucy is really special. She has a plate with 10 screws in her leg due to a break at a very young age in her right front leg,” said Haggerty. “Bunker was our first boy, and I feel like he is my whole heart. Fancy thinks she is the star of the show. Sometimes I say the goats should be called Fancy and Friends. I bottle-raised her, and she just loves humans and dogs. She had to learn how to be a goat.”

To help with the cost of feeding their babies, plus health expenses, Haggerty has two side jobs that have become part of her personal commitment to health and nutrition.

Since 2015, she has been an ambassador for Plexus products, plant-based health and wellness supplements. She also started a natural soap business five years ago with the help of longtime friend Libby Engstrom, who taught her the process of making soap. All of the products are handcrafted with various oils, plus fresh goats’ milk (that she gets from another farm), fragrance or essential oils, botanicals, natural clays and lye.

“I love making the natural soap, and my line of fragrances has really grown,” Haggerty said.

Years on the farm and the menagerie of beloved pets have led the Haggertys to a peacefulness and sincere joy in how they live every day.

“This place is my whole heart. I know that everything I have comes from God, and I wouldn’t want to be anywhere else,” Haggerty said.