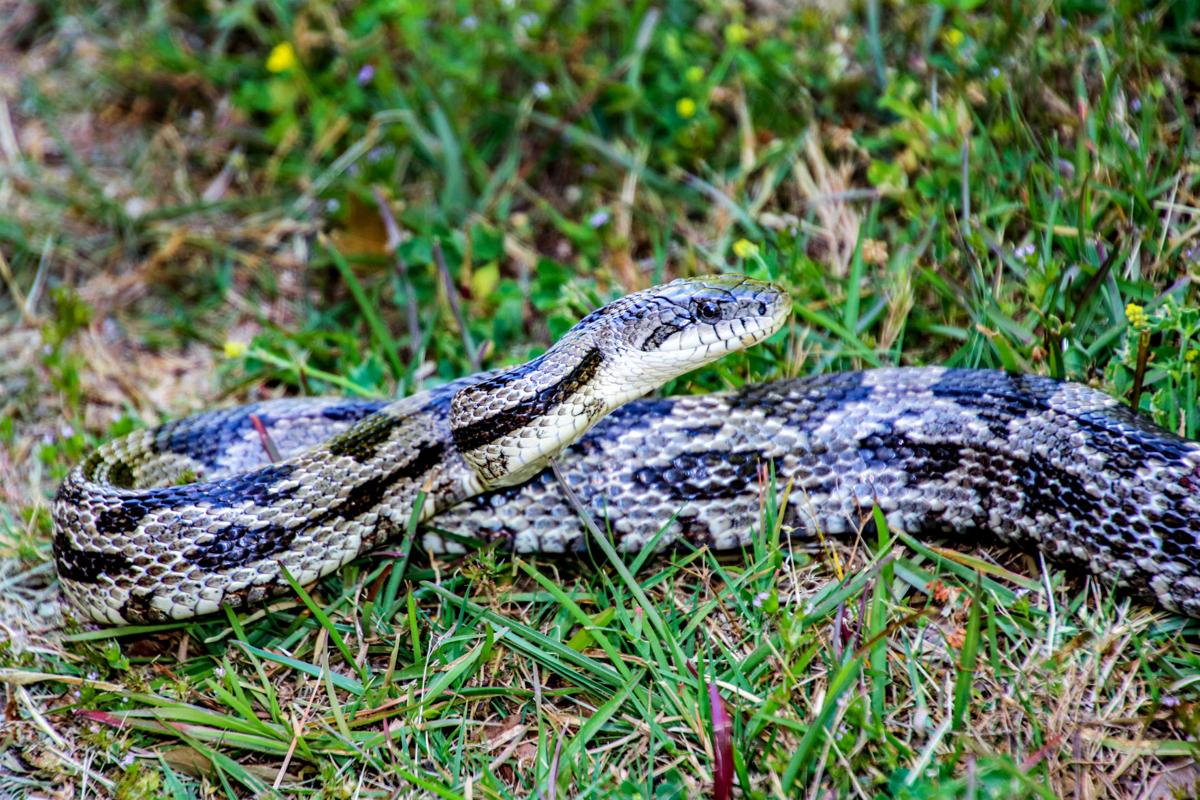 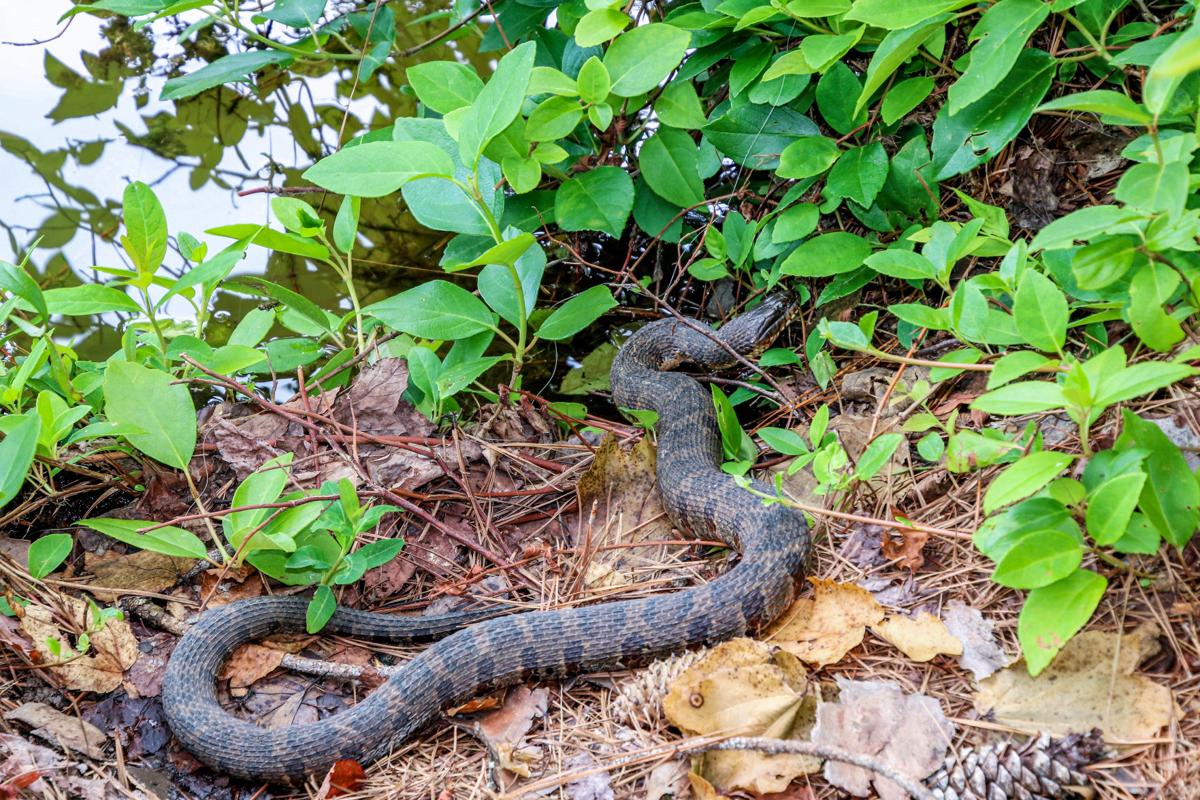 The brown water snake often is mistaken for a cottonmouth 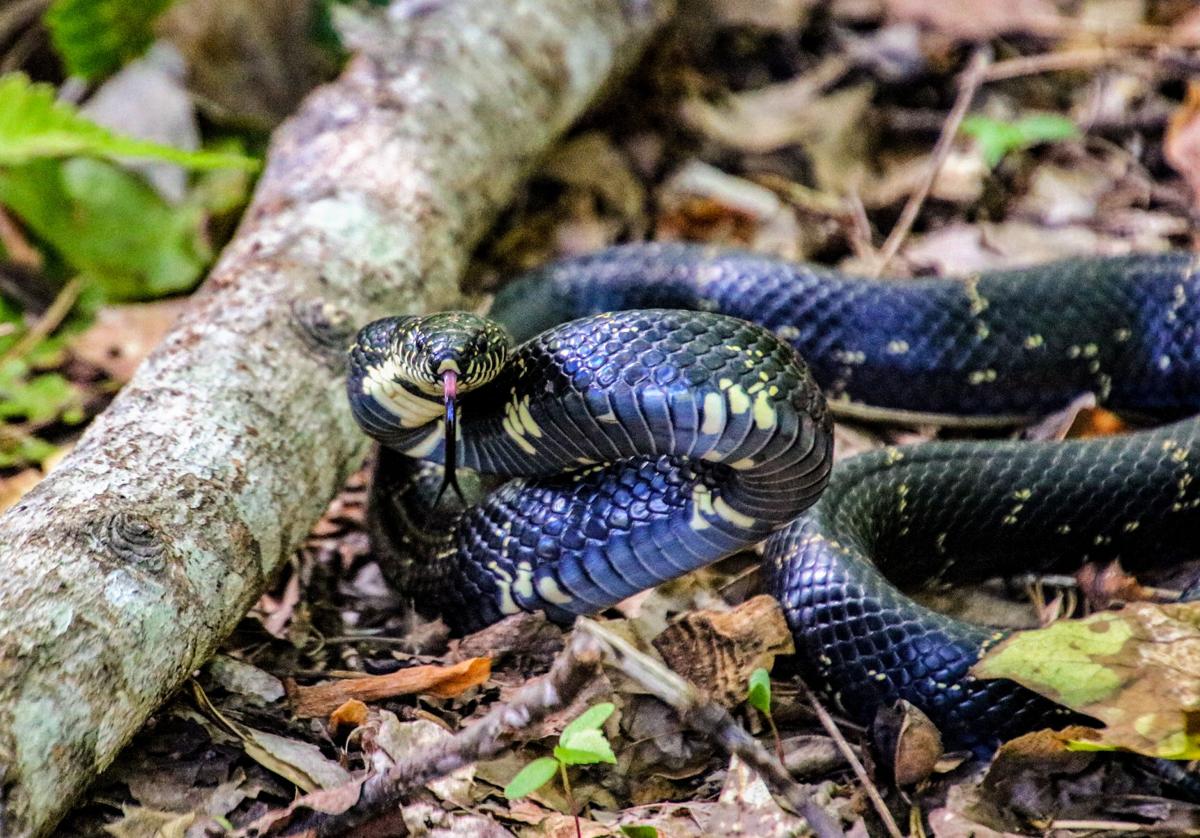 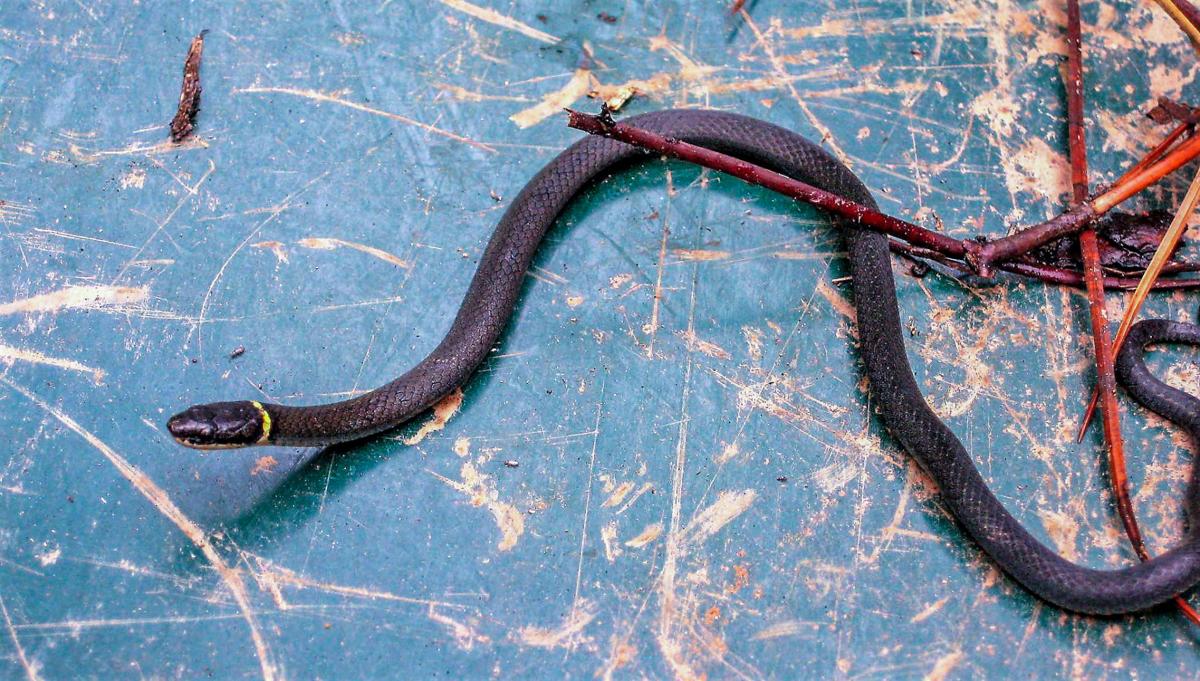 The ringneck snake is named for the yellow necklace it wears 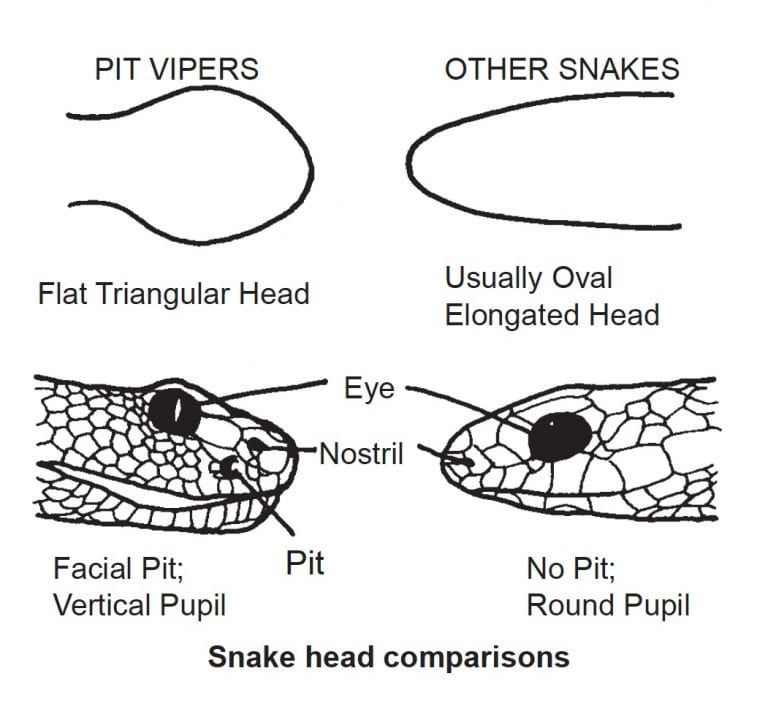 Pit vipers and other snakes have distinct differences in head shape and eyes. 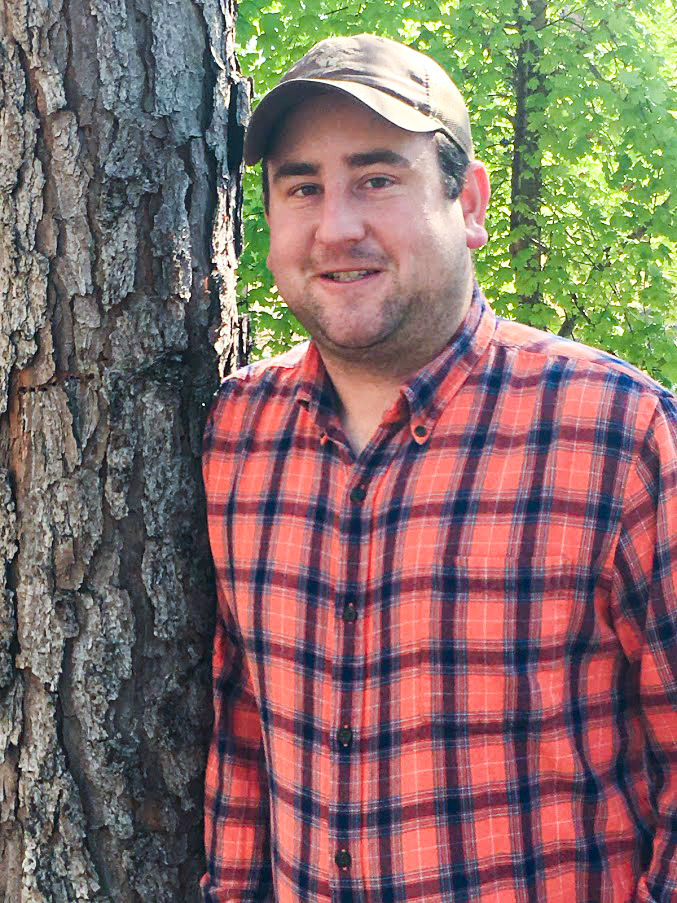 The brown water snake often is mistaken for a cottonmouth

The ringneck snake is named for the yellow necklace it wears

Pit vipers and other snakes have distinct differences in head shape and eyes.

The past couple of months have brought about several changes and additional stress in our daily lives. In the absence of crowd-gathering sports events, we have likely spent more time outdoors, pursuing recreational activities in the woods or lake or at home in the yard and garden. If you fit into this category, chances are good that you already have encountered one of Alabama’s many snake species (or may soon).

Snakes are one of Alabama’s most polarizing groups of wildlife and probably the most likely to garner a reaction when seen. Fortunately, out of these many species, only six are venomous. Five of these six venomous species fall into the class of snakes known as pit vipers.

Due to their venomous nature, these six snakes often get labeled as the “bad guys” and attract a lot of negative attention and press. Unfortunately, this bad reputation often results in the needless killing of the other 34 species of non-venomous snakes on a regular basis. It is important to learn to properly identify them, as these non-venomous snakes are quite beneficial. Let’s highlight six of these non-venomous species that you may see in your everyday activities in the woods, garden, lake or around the home.

All native snakes provide important ecosystem functions, but the first snake in this discussion may directly benefit humans more than others. Kingsnakes are strong constrictors and are resistant to the venom of pit vipers, as they readily eat copperheads, cottonmouths and rattlesnakes, in addition to a variety of other prey. In Alabama, kingsnakes are active almost exclusively by day but are most active in the morning during the summer.

Eastern kingsnakes are large, often 3 feet to 4 feet in length, with some growing to more than 6 feet. They are shiny-black, smooth-scaled snakes with white or yellow chain-link bands that cross the back and connect along the sides. Generally, individuals from the coastal plain have wide bands while those from the piedmont or valley and ridge areas may be narrow or broken. They can live in a variety of terrestrial habitats, but in some areas, their populations have declined. The causes of these declines are unknown, but habitat loss and degradation, imported fire ants, and diseases are potential causes.

The gray rat snake, often known as a “chicken snake,” is likely the most commonly encountered snake, due to its ability to thrive in both rural and urban environments. Identified by its gray coloration with darker blotches, this snake is seen in both urban and forested environments in Alabama. Gray rat snakes in the southernmost part of the state may have lighter coloration. These snakes are constrictors and predominantly consume rodents and eggs, while juveniles eat lizards and frogs. Gray rat snakes are great climbers and can be found trying to climb into bird or squirrel nests or sneak into a chicken coop.

Water snakes may be the most commonly misidentified group of snakes out there, as nearly everyone gets labeled as a cottonmouth or “water moccasin.”  The brown water snake is a trademark example of this common error and probably the culprit behind many good water moccasin stories told after a day on the lake.

Brown water snakes are common snakes that can be extremely abundant in many permanent aquatic habitats. They are excellent swimmers and feed primarily on fish, particularly small catfish, which they capture either by ambush or by actively foraging along the edges or bottoms of rivers and lakes. Brown water snakes are excellent climbers and often seek elevated positions, basking on vegetation up to 20 feet above the water surface. If startled, they often drop from their perches into the water and may accidentally end up in a passing boat, making a day on the lake a bit more adrenaline-pumping.

While other snakes may be more commonly seen, our most abundant snake could be the ringneck snake. Ringneck snakes are small, slender snakes, often between 10 and 15 inches long and generally grayish with a yellow or orange band around the back of the neck and a yellow or orange underside. In central Alabama, ringnecks are particularly common in moist areas, including river floodplains, moist hardwood forests and wetland edges where they spend most of their time underground or hidden under logs, rocks, leaf litter or debris; therefore, they often go unseen until turning over mulch or leaf litter around the home and garden.

A unique trait of ringneck snakes is a mild venom in their saliva, which they use to help subdue small prey items, including a variety of invertebrates, amphibians, lizards and other small snakes; however, they do not possess fangs, and the saliva is harmless to humans.

Another routine visitor that you may see around homes and gardens is the Eastern garter snake. A common snake throughout the Southeast and most of North America, garter snakes often are found in a wide variety of habitats, including meadows, marshes, woodlands and hillsides. Garter snakes may be active by day or night and are often found under boards or other debris.

Unlike most snakes, garter snakes are viviparous, meaning they give birth to live young and sometimes have more than 50 babies. If left alone, they do an excellent job of cleaning up insects, small rodents and amphibians.

While most snakes are found on the ground, you probably would have to look up to find the rough green snake. The rough green snake is one of the easiest snake species to identify, but it’s certainly very difficult to find because it spends a large amount of time hunting for insects, spiders and other invertebrates in vegetation well above the ground. I have only seen two in my lifetime, and one of those was in my boat as I shook a tree to retrieve a fishing lure.

This snake’s green color provides the perfect camouflage, as it searches overhanging vegetation for insects, often along the edges of wetlands and rivers.

Snakes provide many benefits across the landscape, but in some cases, their presence is unwelcome around the homeplace. In most cases, snakes are present around homes because there is an abundance of prey items, such as rodents and insects. Reduce the available habitat for snakes’ prey by removing piles of firewood, lumber, rocks or unused equipment, which are great places for snakes on the hunt. Long grass, weeds and overgrown shrubs also make great snake habitat. A variety of snake repellents are on the market, but their effectiveness may vary greatly or not work at all.

Snakes are simply a fact of life across Alabama, but ultimately, most snakes help us live happier, healthier lives by reducing pest populations. Proactive measures, such as increasing your snake identification skills, being aware of your surroundings when you’re outdoors and watching where you step and put your hands, will help to ensure a safe and enjoyable summer in Alabama’s outdoors.

For more information about snakes, visit us online at www.aces.edu or contact the local county Extension office.