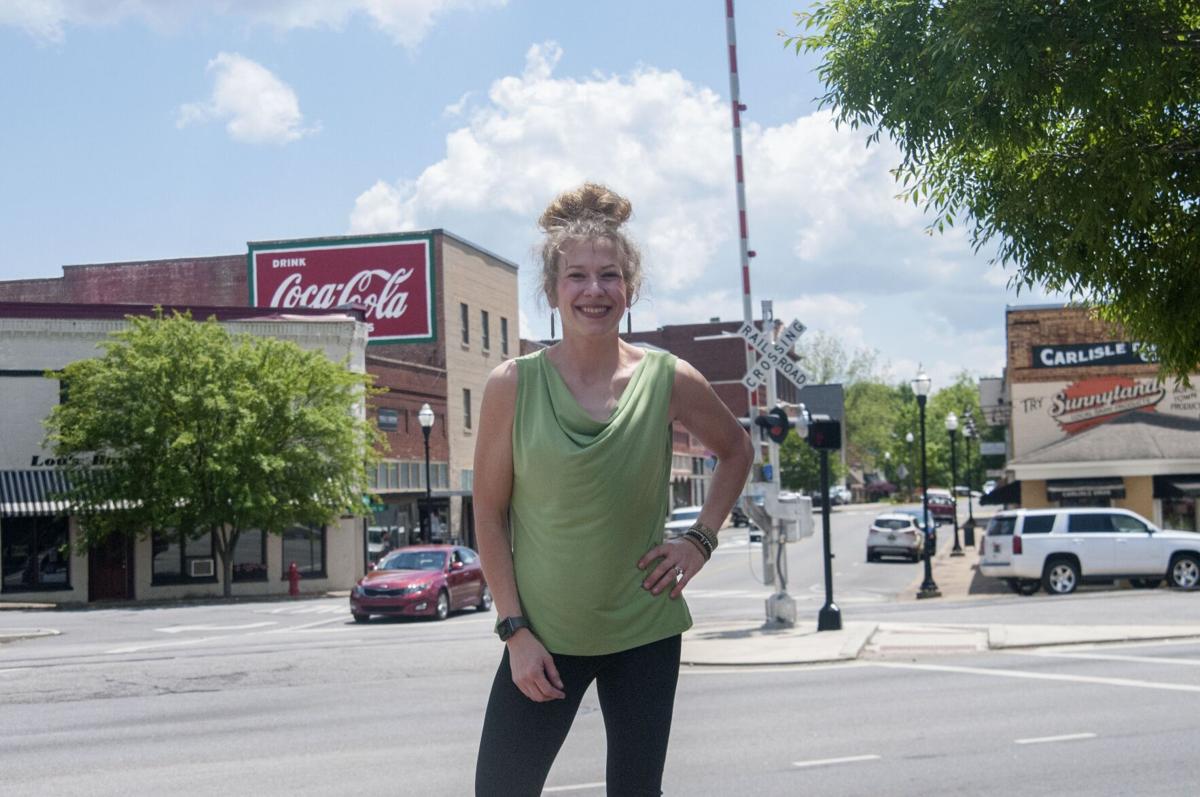 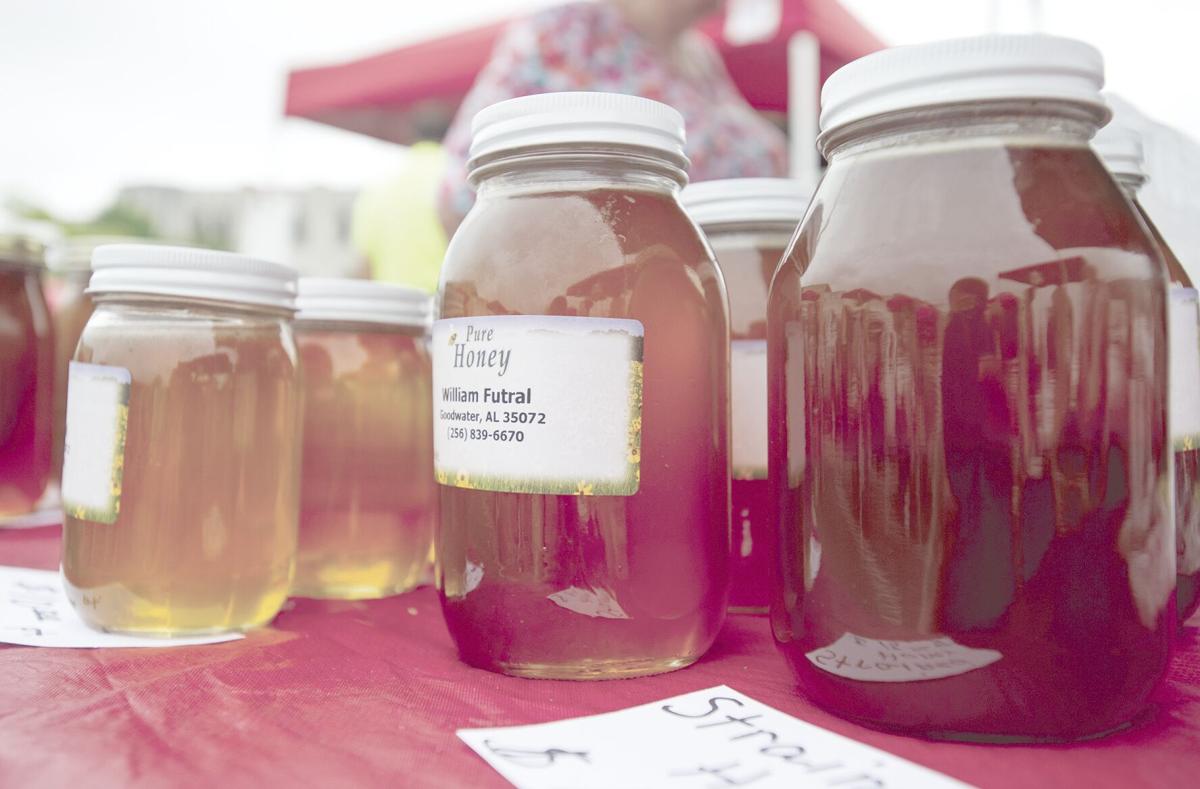 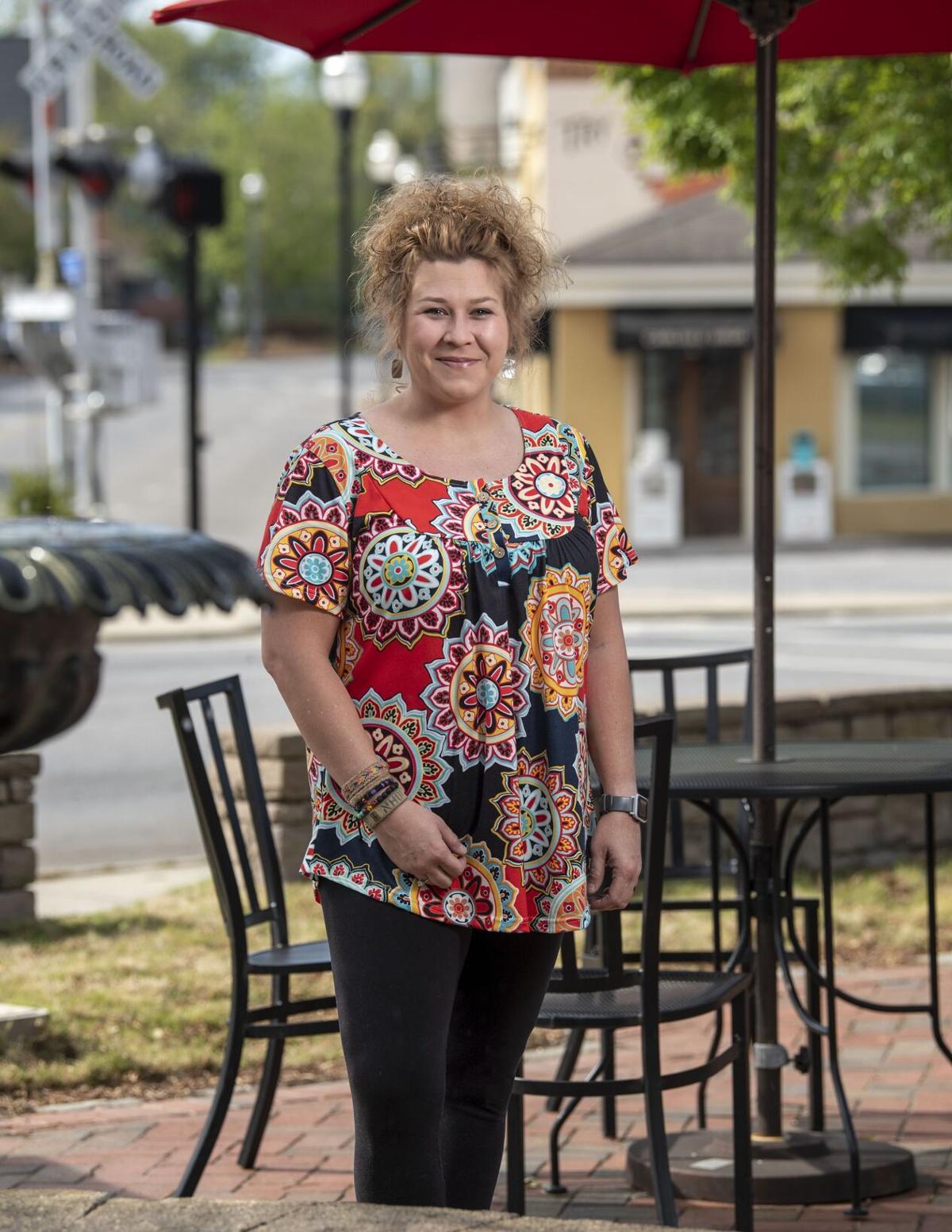 Alexander City’s Carly Herrmann holds one of the area’s most unique jobs: She manages the Alexander City Farmers Market. Carly recruits farmers, opens the market every Saturday morning from June through September, arranges entertainment and assists shoppers, loving every minute of it. 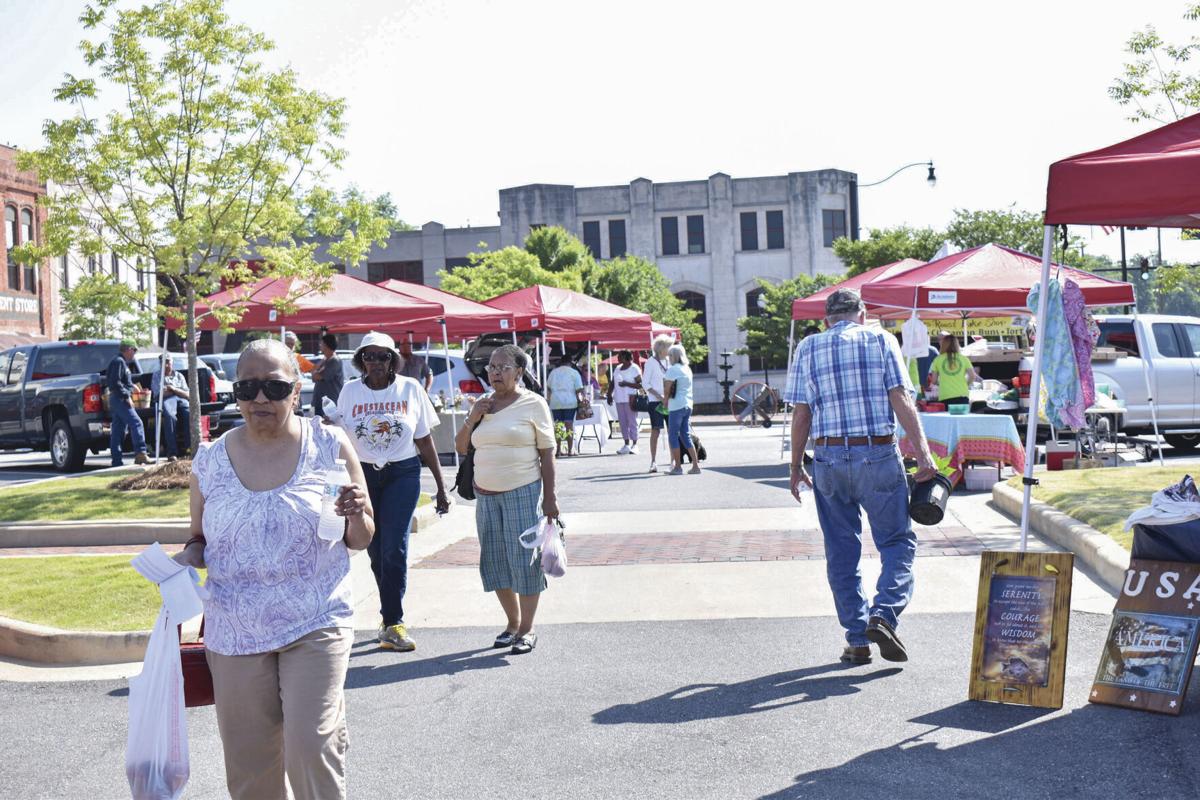 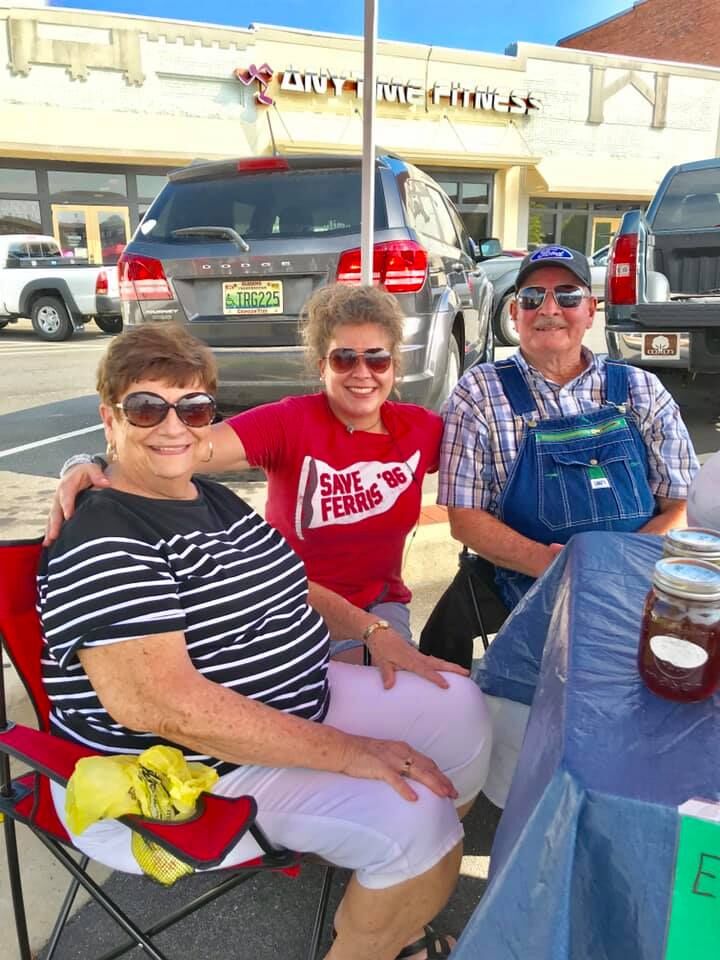 Herrmann said she's learned a lot about gardening through the farmers who sell their produce at the farmers market.

Alexander City’s Carly Herrmann holds one of the area’s most unique jobs: She manages the Alexander City Farmers Market. Carly recruits farmers, opens the market every Saturday morning from June through September, arranges entertainment and assists shoppers, loving every minute of it.

Herrmann said she's learned a lot about gardening through the farmers who sell their produce at the farmers market.

Carly Herrmann’s job description reads like a candidate for the witness protection program, never in one place too long and capitalizing on skills so varied that they don’t seem to belong together. In a day’s work, she pulls a trailer through downtown streets but also helps elderly shoppers bag their groceries; she verifies whether or not a farmer grew his own tomatoes while also booking musicians for outdoor concerts. She does the heavy lifting but makes small talk. She’s part event coordinator, part rain watcher and part family. Herrmann is Main Street Alexander City’s farmers market manager.

“It’s definitely the most odd job I’ve ever held,” Herrmann said. “I just love it. It’s so many different things all thrown in together, and I never know when I’ll have to jump into something new or learn something I didn’t know before, like using cinnamon instead of pesticides or how to open a farmers market in the middle of a pandemic.”

Herrmann will begin her fourth year in the position when Main Street Alexander City opens the farmers market June 6 at Broad Street Plaza. She fell into the job, she said, after approaching then-director of the downtown association, Bree Smith, in 2016 about hosting a spruced up spring yard sale called Junque Jubilee.

As market manager, she recruits farmers and vendors, promotes the market to attract customers, maintains and transports the canopy tents that farmers use as temporary storefronts and makes the call to cancel the market during inclement weather. She monitors the farmers to make sure they have the required permits to grow produce for public consumption and to ensure that the farmers are indeed growing their own produce and not just purchasing it from another party and reselling it as their own.

She’s in charge of setting up and tearing down the Saturday morning event that runs from June through September with occasional specialty markets around the holidays and in the spring strawberry season. That means she’s up before the sun every summer Saturday, hauling a trailer filled with tents to the parking lot at the corner of Main and Broad streets, erecting tents in record time, putting lawn signs in the grass and sometimes acting as makeshift roadie for the musicians that are scheduled to entertain shoppers until the market closes at 11 a.m.

During the market, she greets customers, answering questions and guiding them to the farmers that have brought the items the customers are seeking.

“I like seeing who needs assistance, maybe letting an elderly person sit in the shade while I go around and get the things they need,” Herrmann said. “But I never know when something is going to happen. Last year, we had a car accident at the farmers market.”

The best part of the job, she said, is working with the farmers.

“I am friends with everyone. I know their families. In the off season, I miss them. I try to call and see how everyone is doing. I’ve been checking on them during the pandemic. I very, very much enjoy walking back and forth during the market, socializing with everyone, making sure they sell as much as they can and they’re happy while they’re doing it.”

“I wish there was someplace I could go to find people who are looking to be in a farmers market. But there isn’t, really. The best way, the majority of the time, is word of mouth,” she said.

The job requires a lot of energy and a modicum of physical strength, as well as a memory for names and faces and a penchant for keeping active on social media. It also requires an innate ability to jump from the frying pan into the fire at a moment’s notice.

“You really have to be on the ball all the time,” she said.

“And I have the most amazing farmers market assistant in Jimbo Spencer. He helps me with everything,” she said.

Most of the farmers pitch in, too, and many hands make quick work, Herrmann said.

“Farmers are just a really good stock of people. They are unlike anybody else. They just seem to outdo themselves all the time. They work very, very hard. That’s the best part of the job, interacting with the farmers. Getting to know them and have relationships with them and learn from them.”

Herrmann also attends farmers market training every year. Held in various locations around the state, the training offers an opportunity for managers to network and share ideas.

“That’s where I learned the 70/30 rule,” she said. “I was asking how I could grow the farmers market with other vendors and keep it a farmers market but make it interesting. And they said you keep 70 percent farmers’ produce and 30 percent other vendors. I learned how to use Facebook and Twitter and social media for the market; what ages to follow and how to use pictures. You make connections. I can ask the guy who runs the Pepperell farmers market how he does something, and the guy who runs a small market with just four tents can ask me. It’s very helpful.”

It’s a job that blends all of her work experience here-to-fore; and yet, it challenges her to grow.

Born in Montgomery, Herrmann moved to Alexander City when she was 8 years old. Her father was a Ford dealer in town, and Herrmann grew up on the lake, kicking her feet in the water off the dock while talking on the phone with her friends, and riding a Sea Doo to her tennis lessons. After leaving college early, she worked at the original Mama Goldberg’s Restaurant and drove a bus for adults with developmental disabilities at Valley Haven School.

“I would plug in the playlist on my phone, and we would all sing as we were driving along. They knew all the songs,” she said.

She also worked as a certified nursing assistant at a retirement home.

“I loved special education and CNA work. I very much need a job where I am helping people directly. It’s important for me to feel fulfilled. I want to make people feel good,” Herrmann explained.

Married to her husband, Travis, for 15 years, Herrmann is mom to son, Teddy, who attended Veritas, and 4-year-old daughter Emma, who has been enrolled at First Baptist’s Early Learning Center. The family attends Vertical Point Church in Alexander City.

In the winter, her job focuses on assisting Main Street Alexander City executive director Jeffcoat with data input to help match up potential renters with available buildings, working on Main Street projects and looking for farmers for the next season’s market.

While she would, someday, like to go back to college and finish her degree, she’s found her niche in the realm of the farmers market and hopes to stay connected to the unique position far into the future.

She thinks about that late on Saturday mornings after the market has closed up and the tents have been collapsed and stored in the trailer. When the signs have been picked up, the tables cleared, she checks to make sure the parking lot is clean and there’s no indication that the farmers market happened there earlier in the day. As she pulls the equipment trailer through the thick of traffic and pedestrians downtown – trying not to hit anything – she’s grateful for her rather odd job description and the joy it brings to life.