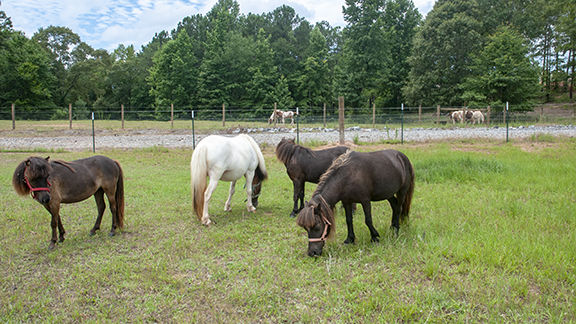 The mini horses have a separate area inside nearly 1,000 feet of fencing to roam and play. Photo by Suellen Young 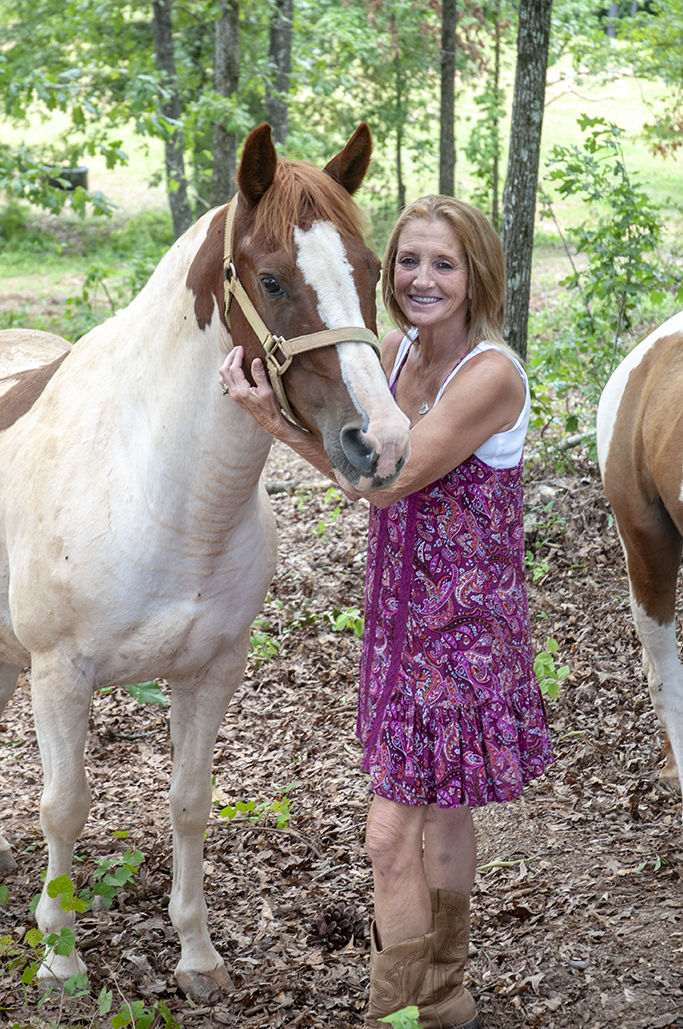 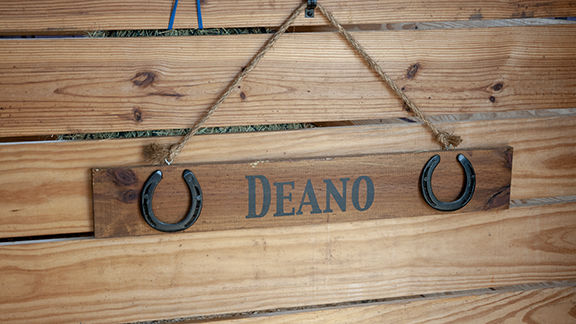 The most stubborn horse that came to the farm was named after the late Deano Vopali. Photo by Suellen Young 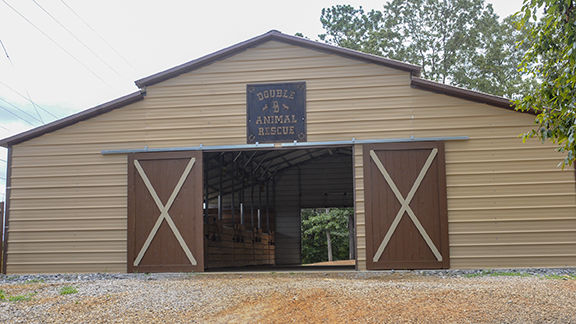 Debbie Vopali made the barn’s sign and doors on her own, and lent a hand with the interior. Photo by Suellen Young

The mini horses have a separate area inside nearly 1,000 feet of fencing to roam and play. Photo by Suellen Young

The most stubborn horse that came to the farm was named after the late Deano Vopali. Photo by Suellen Young

Debbie Vopali made the barn’s sign and doors on her own, and lent a hand with the interior. Photo by Suellen Young

Debbie and Deano Vopali had a dream to provide land, comfort and a forever home to large animals in need on their property in Jacksons Gap. When Deano passed away last fall, construction was halted, and the opening of Double D Animal Rescue was delayed.

Now, with the help of her son, brother and some family friends, Vopali has a new barn, with more than 6,000 feet of fencing around grassy pasture and shaded trees where her 10 horses and two donkeys thrive.

The large sanctuary is located on land that houses American Watersports off Highway 280, and Vopali has big plans for its future.

“As soon as this barn fills up, we’ll start building another one. There was no shelter for large animals in the area, and I won’t turn away any animals in need,” said Vopali.

With nearly 14 acres in total, she said, there is plenty of room to grow the rescue business, and she hopes to be able to take in other animals down the road, including cows, goats and alpacas. In Vopali’s mind, there is no limit to the number of animals she is willing to care for.

“I grew up around horses and always rode on and off throughout my life. These animals are like my kids,” said the Georgia native.

When she saw the numbers of abused animals online that didn’t have places to go or owners that could no longer care for them, Vopali and Deano knew they had to step up. Some horses come to her famished, sick and afraid of people, but with the help of Dr. Randy Plaisance from Castaway Vet Clinic in Eclectic, she nurses them back to health and makes them comfortable with humans.

“I only take the animals in after a check up from the vet to make sure they won’t make other horses sick. All of them on site are now up to date with shots, testing and in good health,” said Vopali.

The first two animals Vopali and Deano rescued together were donkeys named Pixie and Cassie. The donkeys have a place to lay in the barn but are always out and provide protection for the horses.

Some animals come with names, while others Vopali names herself, such as twin mini horses Hansel and Gretel. There are now four mini horses and six full-sized, including a retired 23-year-old Red Rooster show horse. There is even a horse named Deano now.

“A good friend of ours said, ‘The first stubborn horse you get in needs to be named Deano’,” she said with a grin.

The newly completed barn contains nine stalls, with some large enough to fit small horses in pairs. Vopali consulted Plaisance when building the barn to ensure it was suitable for the health and care of her animals.

The structure is fabricated from wood and aluminum for added strength. Vopali hand built the barn doors, and completed the interior of the barn with the help of Timmy Allen, Troy Deloach, Seth Cruz and Brittany Williams.

A steel fence was built around the barn for supplementary protection, and additional fencing was put up in the meadows where the horses spend most of their time during the day.

Joseph James is a welder who assisted with the fencing completion and volunteers time to help her, especially since Deano’s passing, Vopali said.

“They get plenty of love and attention. The first time the horses went down to the meadow after the fencing was installed, they had the time of their lives,” she added.

There is a 1,000-foot fenced area where the four mini horses play separately from the regular-sized ones.

While the animals roll on the ground, eat grass as fast as it grows and run free with plenty of space daily, Vopali and her crew clean out the barn. It’s pressured washed every two to three weeks, and the barn floors are sanitized and stalls cleaned out every day.

They also maintain the land on their own, including the immense amount of grass to cut and ground labor. The hill near the barn was taken down about 5 feet, which was done by Deano with their own bulldozer and dump truck.

Teaming up with local animal control, Vopali has plans to  build a holding fence on Double D Animal Rescue’s site for stray large animals that law enforcement may locate. Typically, they have nowhere to bring them, and Vopali is happy to either watch them temporarily or add them to her herd if not claimed.

“If anyone needs to find a home for a rescue, I have a place for them; however, I am unequipped to take in dogs, and I won’t be boarding other people’s horses,” she added.

In the near future, Vopali plans to begin hosting fundraisers to help with the expense of animal care and barn upkeep. Between vet bills, emergencies and multiple forms of horse food to buy, she said, the nonprofit organization always accepts donations.

Double D Animal Rescue plans to play host for children’s events and partner with groups such as the Boys and Girls Club and Camp ASSCA. Program ideas in the works include a fall festival and a winter wonderland visit with Santa around the holidays.

Vopali also said kids can come on site to feed the horses, who love carrots and apples. She plans to plant an apple orchard next year to meet the animals’ immense consumption.

The expense and labor of supervising these animals is not easy or cheap, Vopali said, but Deano keeps her going when she feels overwhelmed.

“It’s been a long road without Deano, but whenever I feel like I can’t go on, he gives me that push. Also, these animals rescued me as much as I’ve rescued them,” she said.

Volunteers are welcome, and any groups wanting to interact with and learn about the animals should contact Vopali.