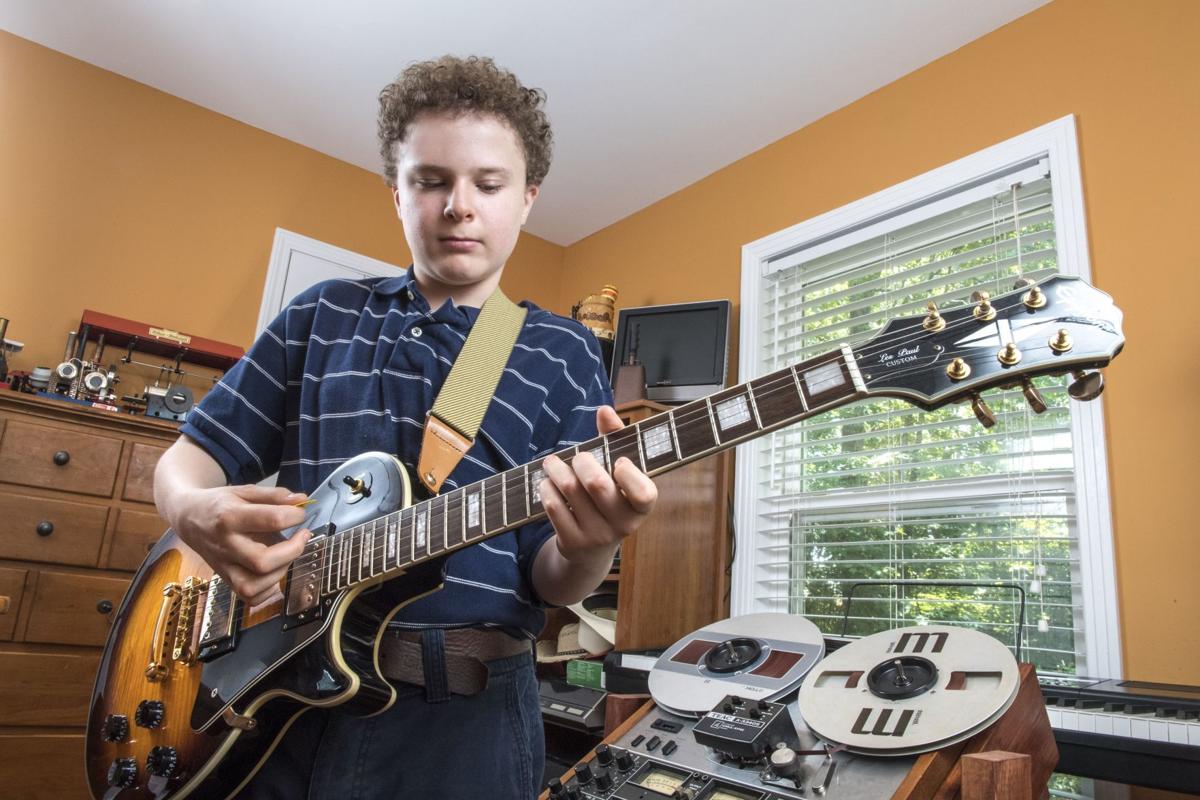 Ryan Downing mostly writes, plays music and records on his reel-to-reel in his bedroom. 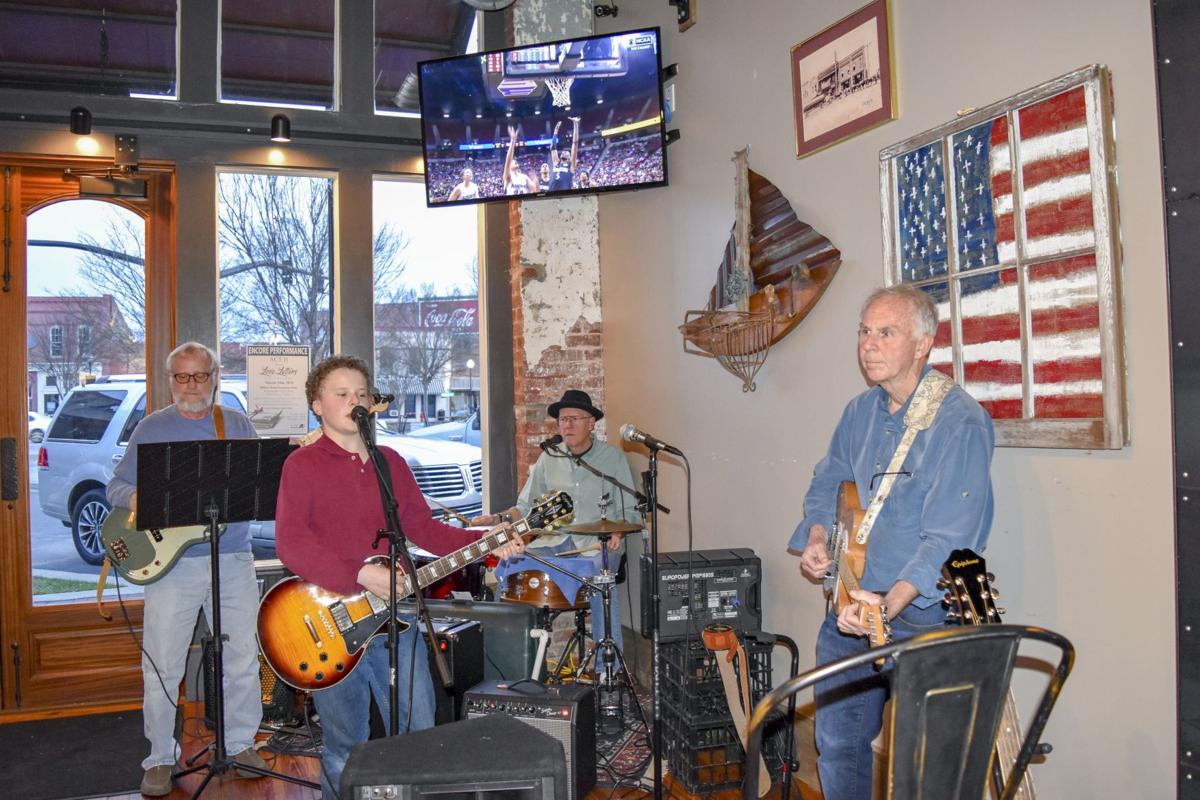 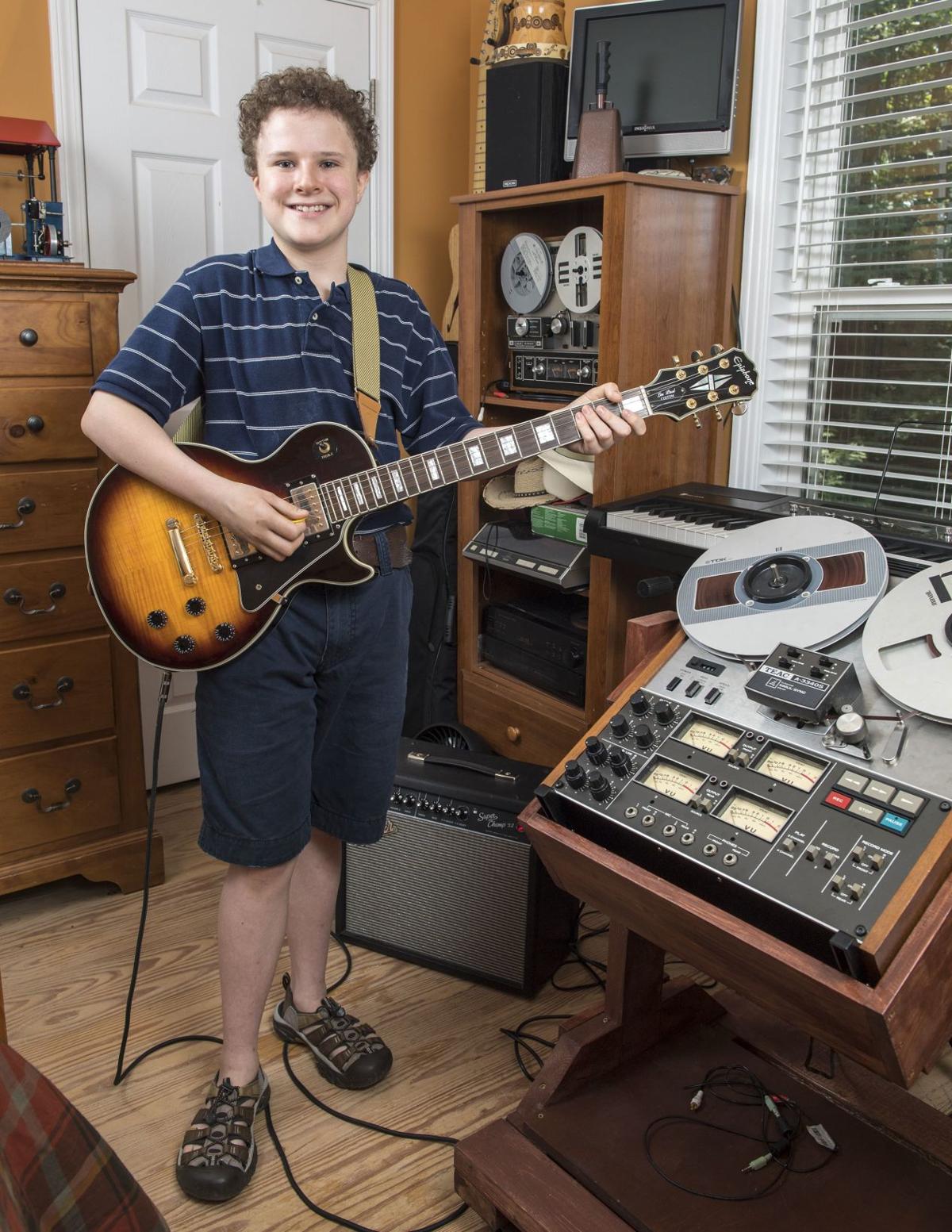 Downing has been playing music since he was 5 years old and owns more than 20 different guitars.

Ryan Downing mostly writes, plays music and records on his reel-to-reel in his bedroom.

Downing has been playing music since he was 5 years old and owns more than 20 different guitars.

Dadeville’s Ryan Downing is a musical prodigy, having formed multiple bands, collaborated with musicians across the globe, learned the basics of audio engineering, started his own recording studio and studied the nuances of classical music from the ’40s to ’80s. While these goals may take some a lifetime to obtain, Downing has achieved them in just his 14 years of life.

When he was younger, his hands were too small to get an accurate grasp on instruments, he said, but by age 9 he was playing guitar, piano, accordion, Hammond organ and even tried the saxophone. Currently, he owns at least 20 different guitars of all different types and sounds.

“My dad taught me my first chords on the guitar. Andrew Martin from Alexander City really taught me more nuanced technique,” said Downing, who has a knack for picking up instruments quickly.

Many mentors, friends and family members have played a role in Downing’s musical evolution.

“Ryan has been privileged to have many great friends and mentors. John Moore of Dadeville and Michael Clark of Kent, both excellent guitarists, taught Ryan the art of keeping tempo and playing together with other musicians. Many thoughtful and talented individuals have shared their time, knowledge and musical skills with him. They also have participated in many of Ryan’s recording,” said Laurie Downing, Ryan’s mother.

His favorite music to listen to and play is classic rock, but Downing also enjoys jazz, blues and some older-style country.

“I enjoy playing folk rock the best. It’s a diverse genre from the ’60s and ’70s that mixes American folk and rock from the ’50s to create a softer, more acoustic sound,” said Downing, who has spent a lot of time studying various decades of music cultures.

At age 10, he played his first public performance at Mellow Mushroom in Auburn and has since played at church Christmas programs, assisted living homes, Alexander City’s veteran’s hospital, a customer appreciation day for a bank and more.

Kira and Justin Woodall, owners of Lake Martin Pizza Co., have had a large influence on launching his career as well, he said. At 11 years old, Downing played at Lake Martin Pizza in Dadeville and has since played at least once a year at both that location and in Alexander City.

In 2016, Downing recorded five songs – three of them were original – at Fame Studios in Muscle Shoals. That summer, he attended Spicer’s Band Camp in Auburn where he received expert individual and group instruction learning music skills in a real band setting.

Audio engineering is of equal interest to Downing, along with musical performance, and he works with digital and analogue reel-to-reel recorders. He has learned how to mix instruments and gauge the amount of volume needed on each track.

“I picked it up easily. My dad, Mitch, taught me a little about how sound works, but I’ve learned by listening to each instrument and the nuances they create how to get an accurate mix. I can orchestrate well and know how instruments go together,” Downing said.

His aunt and uncle, Dana and Randall McClendon, created a recording studio in their garage apartment where Downing has recorded many musicians. Downing has also traveled with equipment to record others at different sites.

Several of these artists Downing has worked with have formed the band, Smilodon and The Sabers, which is a classic rock cover band. Many of the members are retired – and now enjoy playing music as a hobby – and have assisted Downing with fine-tuning his talent over the years.

“It’s a psychedelic-type name with a nod to the ’60s and paleontology,” said Downing.

Previous to this band’s formation, Downing had collaborated with musicians around the world on more than 50 songs through a website called Bandhub, which shut down earlier this year. He was the organizer on nearly half of these compositions and has been composing his own music since age 10.

“I can write and read sheet music. Sometimes my dad writes lyrics, and I’ll write the music,” said Downing.

His YouTube channel, Whistlestop Buskers, features more than a dozen original songs, and he produced Twelvepitch Records with a fellow Bandhub member.

He has been home-schooled since third grade, so Downing has more time for his musical interests. He practices about three-and-a-half hours each day, which includes working with instruments and with audio engineering.

“I’ve started voice lessons, as well. I really don’t like to sing, but it goes hand in hand with playing music,” he added.

Downing is a member of the International Singer-Songwriters Association and several other audiophile forums. His goal is to pursue a career in this industry – a 50/50 split with musical performance and audio engineering.

“I don’t want to live a troubled life. I want to be well rounded,” said Downing.

Most recently Downing’s cover of I’ll Fight by Wilco – produced from performances with band mates – was aired on the syndicated internet radio AL Krusz Showcase.

“Ryan has been blessed to have people give him opportunities to play at their establishments and venues. These thoughtful people have fueled his journey to the current place in his musical adventure,” said Laurie.