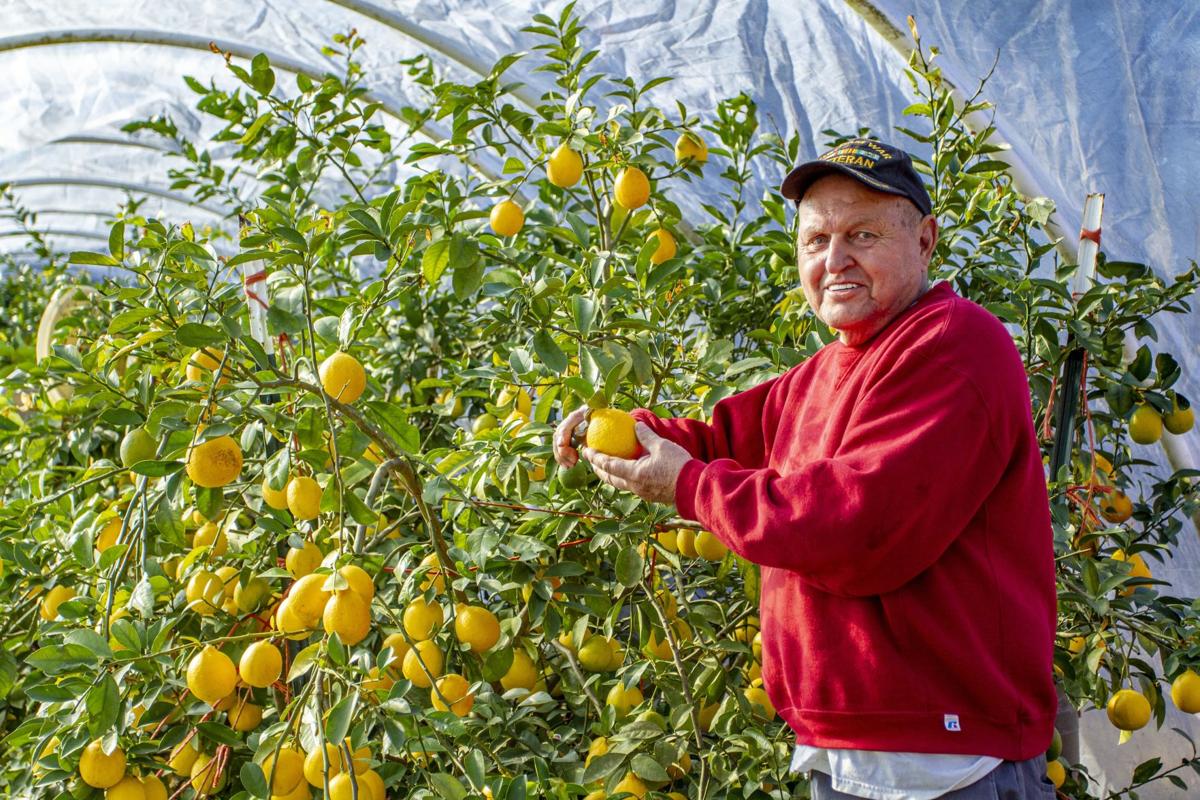 David Sanford harvests his citrus fruit in November and is one of the only growers in the area. 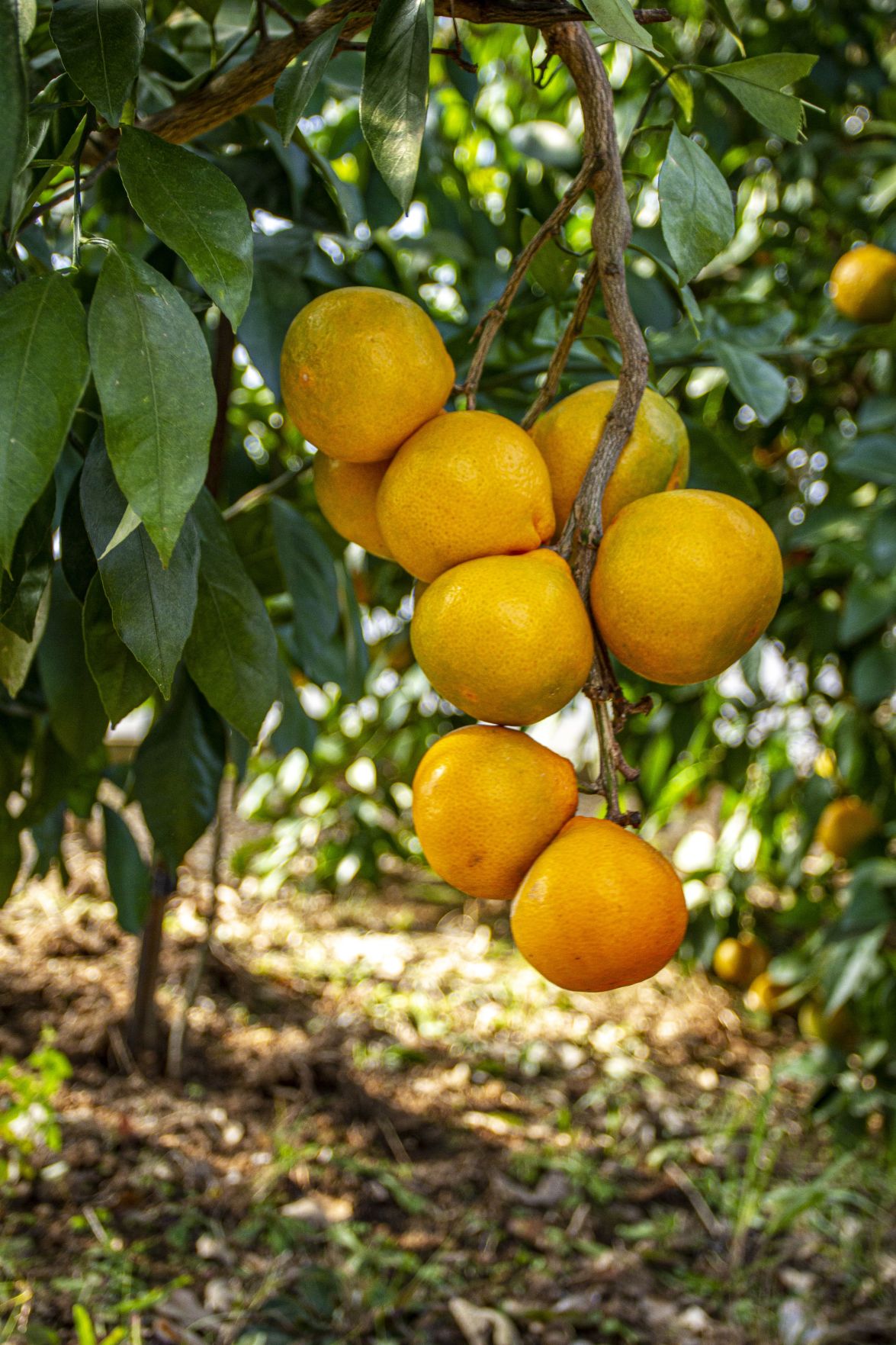 The fruit hangs in bunches, sometimes up to 10 pieces on a branch and grows year round.

David Sanford harvests his citrus fruit in November and is one of the only growers in the area.

The fruit hangs in bunches, sometimes up to 10 pieces on a branch and grows year round.

David and Deborah Sanford, Alexander City natives, did not see themselves as farmers when they began their lives together. In fact, David Sanford worked for Russell Corporation for 32 years; and then, at The Ridge and River North marinas after his retirement.

Now, after many years of working in the dirt and offering lots of tender love and care, the Sanfords have developed Citrus Creek Farm, which just may be the only citrus farm in central Alabama, and they definitely have the only one within the city limits of Alexander City.

“As far as we know, we are the only ones with grapefruits and kumquats, for sure. I called the Tallapoosa County Extension agent one time, and he was so surprised when he saw the trees, that he called the paper; we ended up on television; and now, we have people coming in groups to see the trees,” said Sanford.

Deborah has lived her entire life on the land where she and Sanford live now. Whortleberry Creek runs through the Sanfords’ property, with their home on one side and the trees planted just on the other. They are able to sell the fruit right from their yard.

“The old chimney from my dad’s house is still standing. The land around it has changed a little though. We built the pond 20 years ago, and that’s what we use to water the trees. We just pump it right up the hill,” Deborah said.

Sanford recalled that he never thought about citrus until his friend John Neighbors suggested it about 15 years ago. Neighbors had been dabbling in peach trees and decided to try his hand with some oranges and lemons.

“John took me under his wing and got me excited. I ordered some orange trees – between 12 to 36 inches tall – and put them out just to see what would happen. At first, we were just piddling, but it was such a success, people found out and started coming up from Montgomery and Clanton to see them,” Sanford said.

Eight years ago, the Sanfords added lemons, limes, grapefruits and kumquats, and most of their trees are purchased out of south Alabama. Although Sanford doesn’t use any special fertilizer, he does have an obvious green thumb. He doesn’t have a high-tech greenhouse, but PVC pipe arches extend over the rows of trees every 6 to 8 feet, so a tarp can cover the trees in cold weather. Temperatures inside the greenhouse can exceed 100 degrees in the winter, using a special heating system.

“I leave the fruit on the trees all winter, and it’s still good. I turn the PVC arches into a greenhouse. I fill 55-gallon burn barrels with water and put one by every tree, so the water heats under the sun during the day and adds heat to the air at night. I also have a wood heater just in case it gets really cold,” Sanford said.

Just for fun, the Sanfords grow pineapples in separate containers. Figs and grapes grow in a wire-enclosed area to protect them from the deer. Luckily, deer don’t like citrus. They also have ducks that refuse to get in the water and prefer to play with the chickens, but those chickens offer Deborah a way to give back to the community.

“We just gather the eggs up each day, and I take them to the church or to someone – wherever they are needed. We just have so many blessings, and I want to share those,” said Deborah.

When the fruit begins to grow in the summer, they hang in bunches – sometimes up to 10 pieces of fruit in a bunch – and the weight can bend a branch to the ground.

“It’s ready to harvest about mid-November. We will have thousands of pieces of fruit – around 1,500 lemons from two trees. One year, I froze the juice of 90 lemons and had fresh lemon juice for two years. I am really spoiled with our fresh lemons. They just taste so much better than the ones I buy at the store,” Deborah said.

Sanford said he has so much fun with his hobby that he is willing to share tips with anyone who is interested. He has groups come to ask questions and learn his gardening tips, which he claims are simple but tried and true.

“I just plant the trees, and the Lord provides the fruit,” said Sanford, who is also a veteran and serves on the Alexander City Honor Guard.

Anyone interested in visiting Citrus Creek Farm or purchasing fruit at the harvest, should call the Sanfords at 256-234-5483.