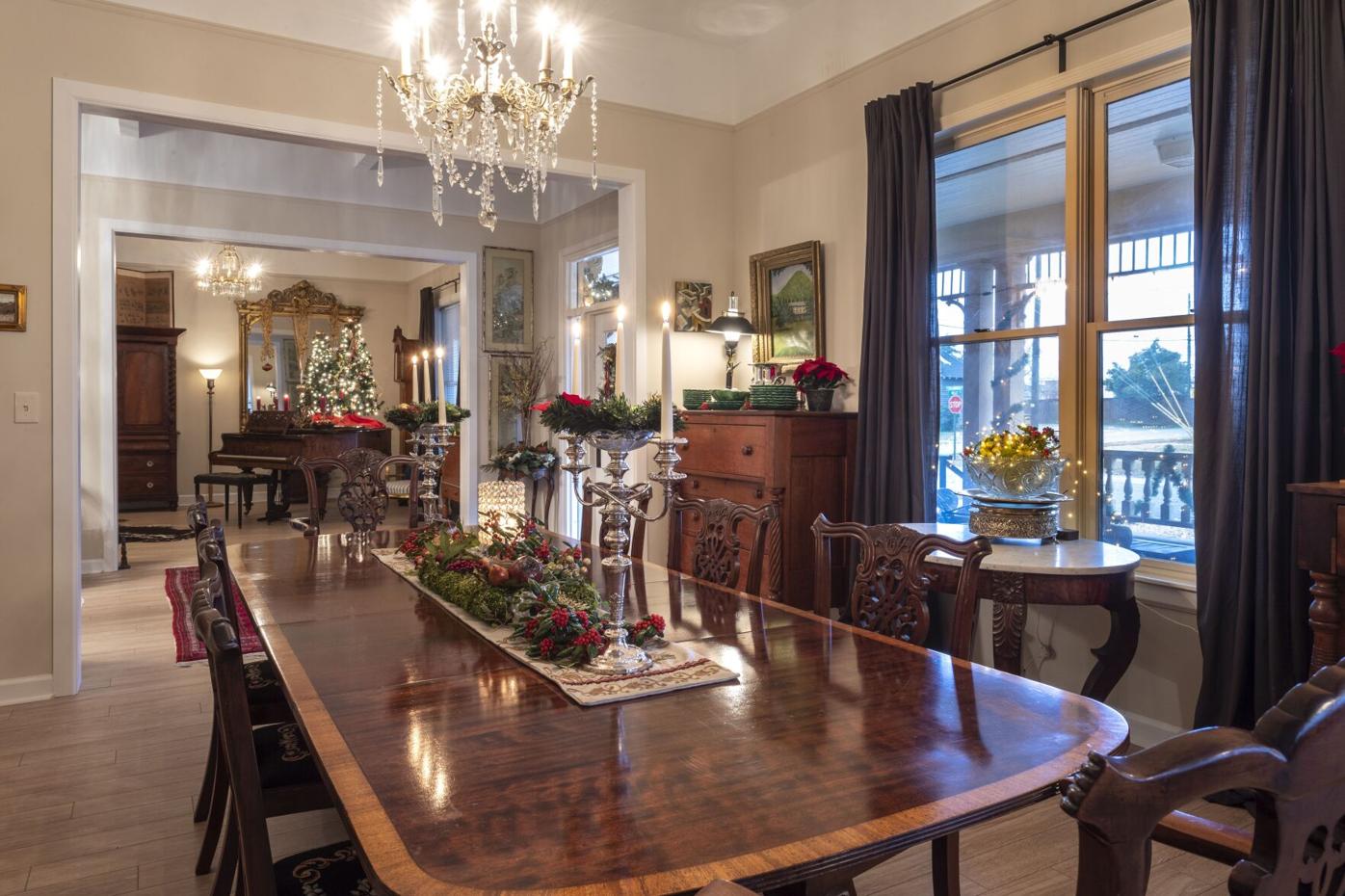 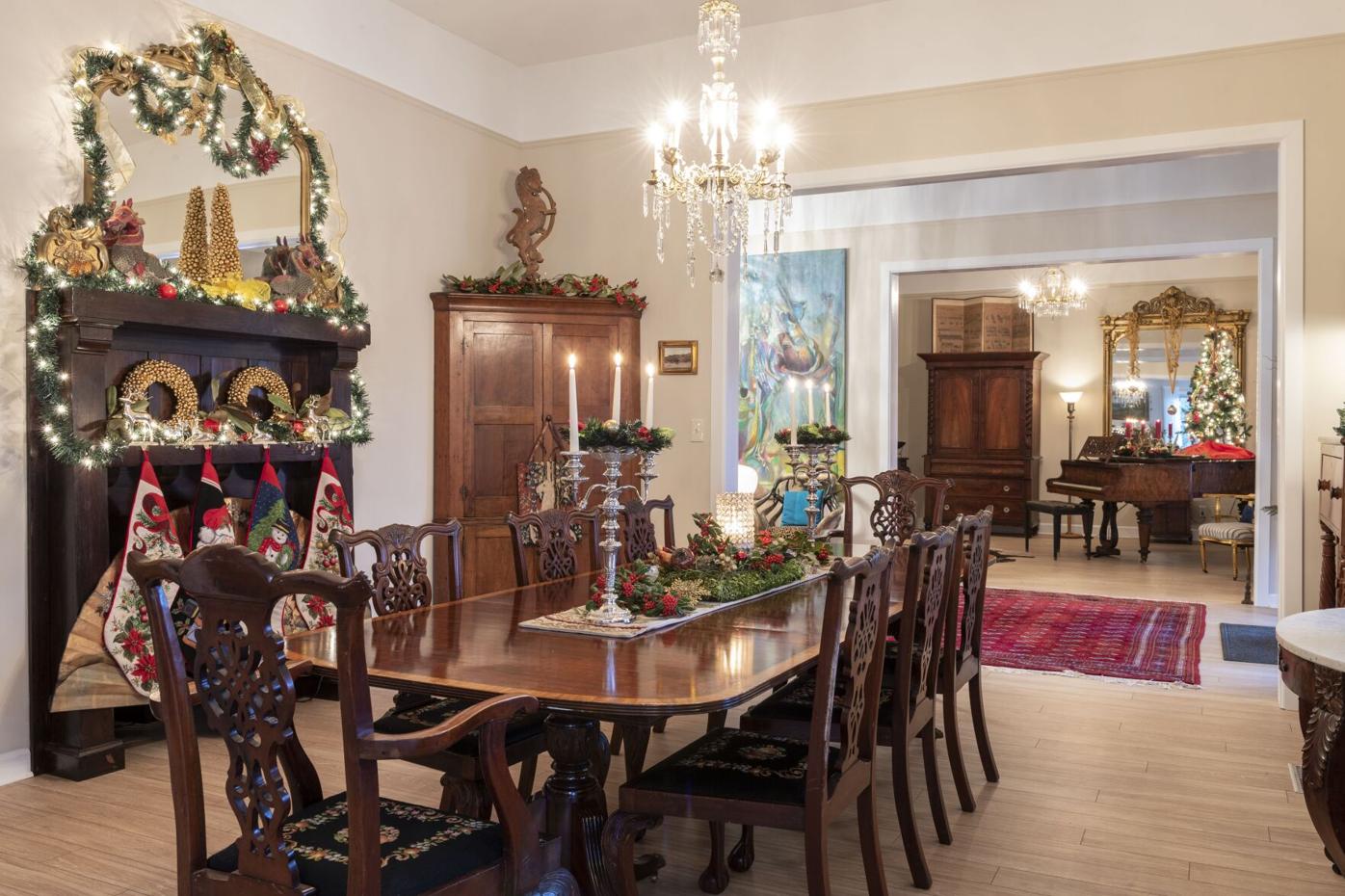 In the dining room, chairs needlepointed by a family member surround the table next to an installed 1890s Edwardian mantel and a 1760 corner cabinet from Virginia 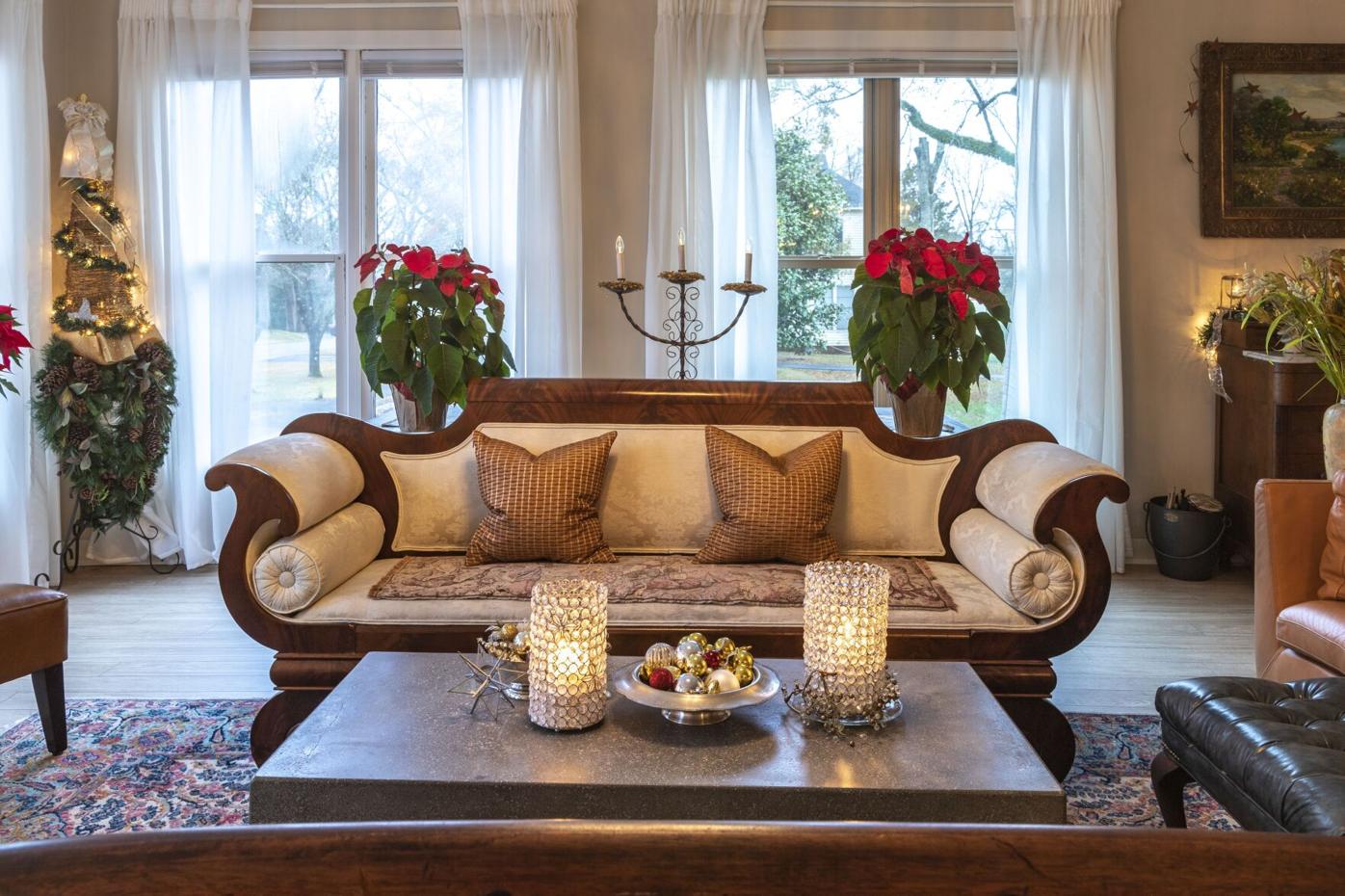 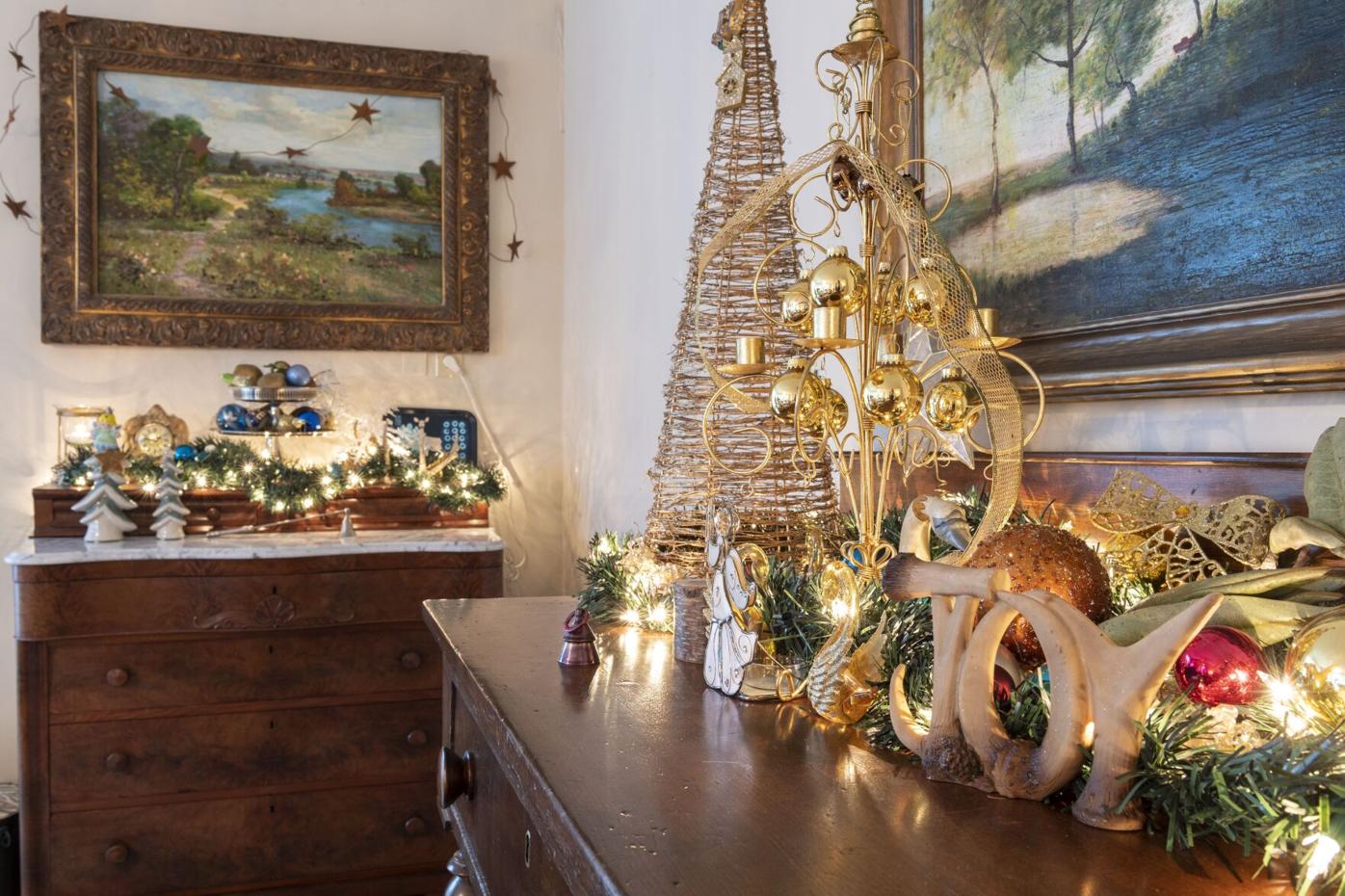 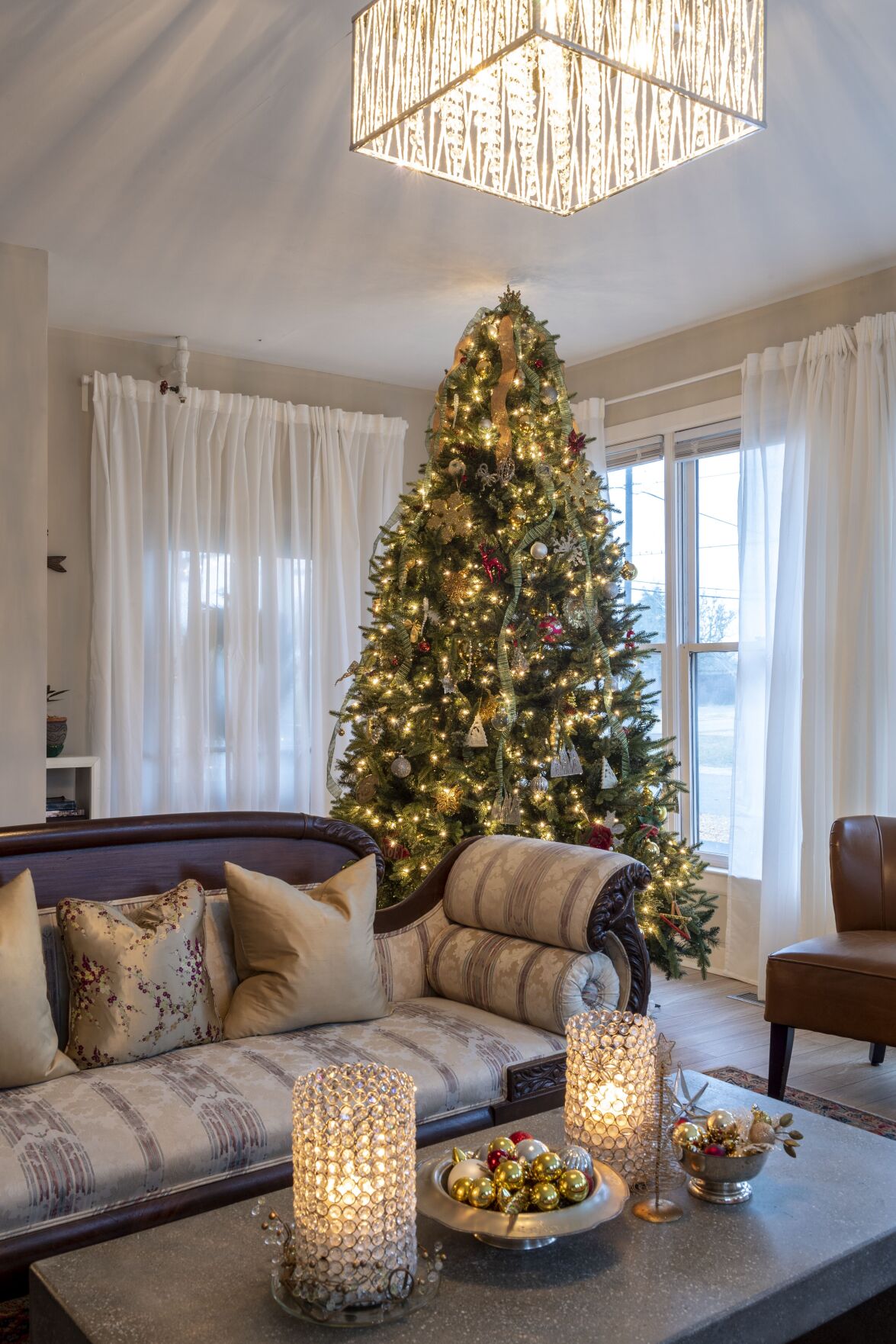 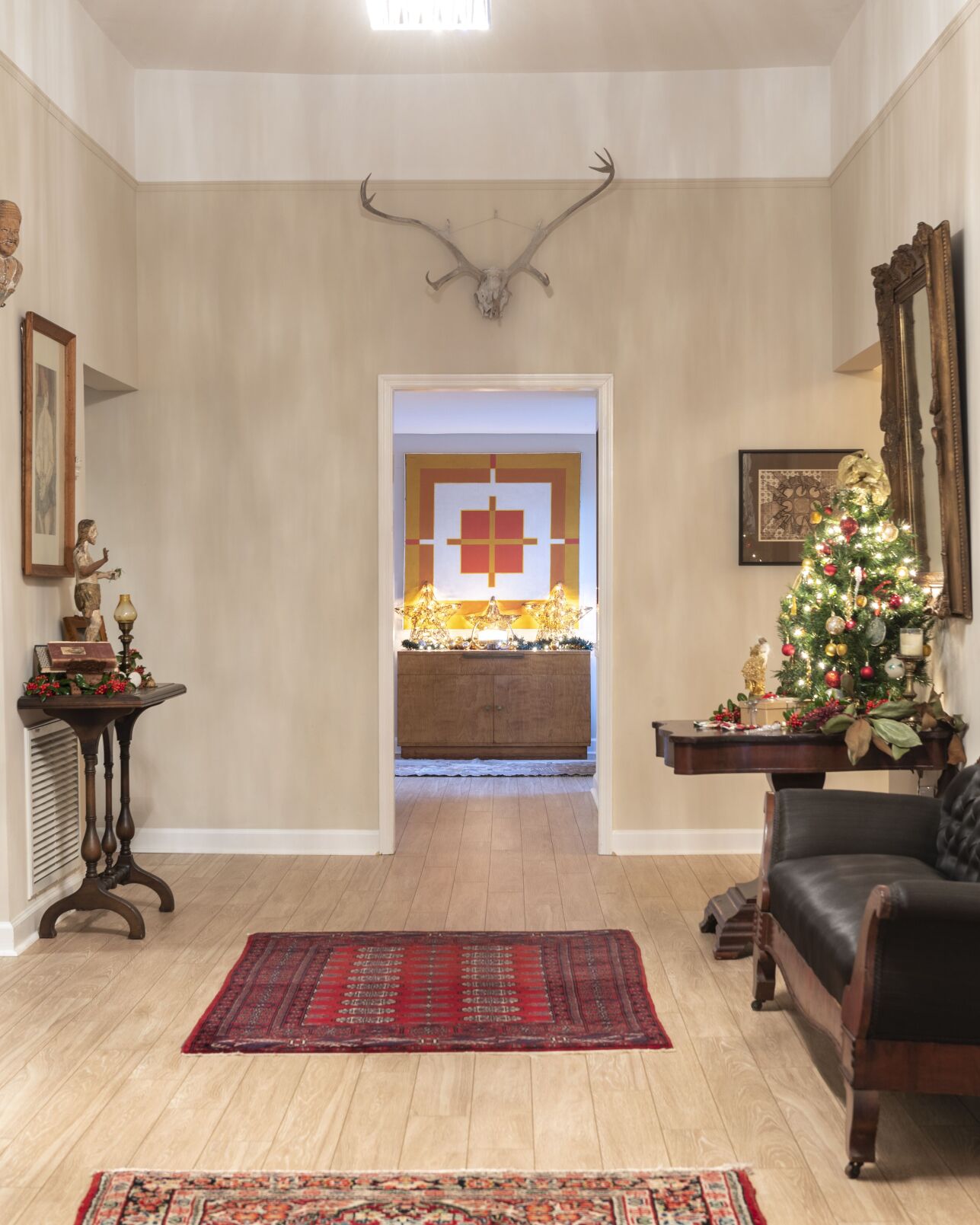 A wedding gift, the den's op art painting can be viewed from the entry 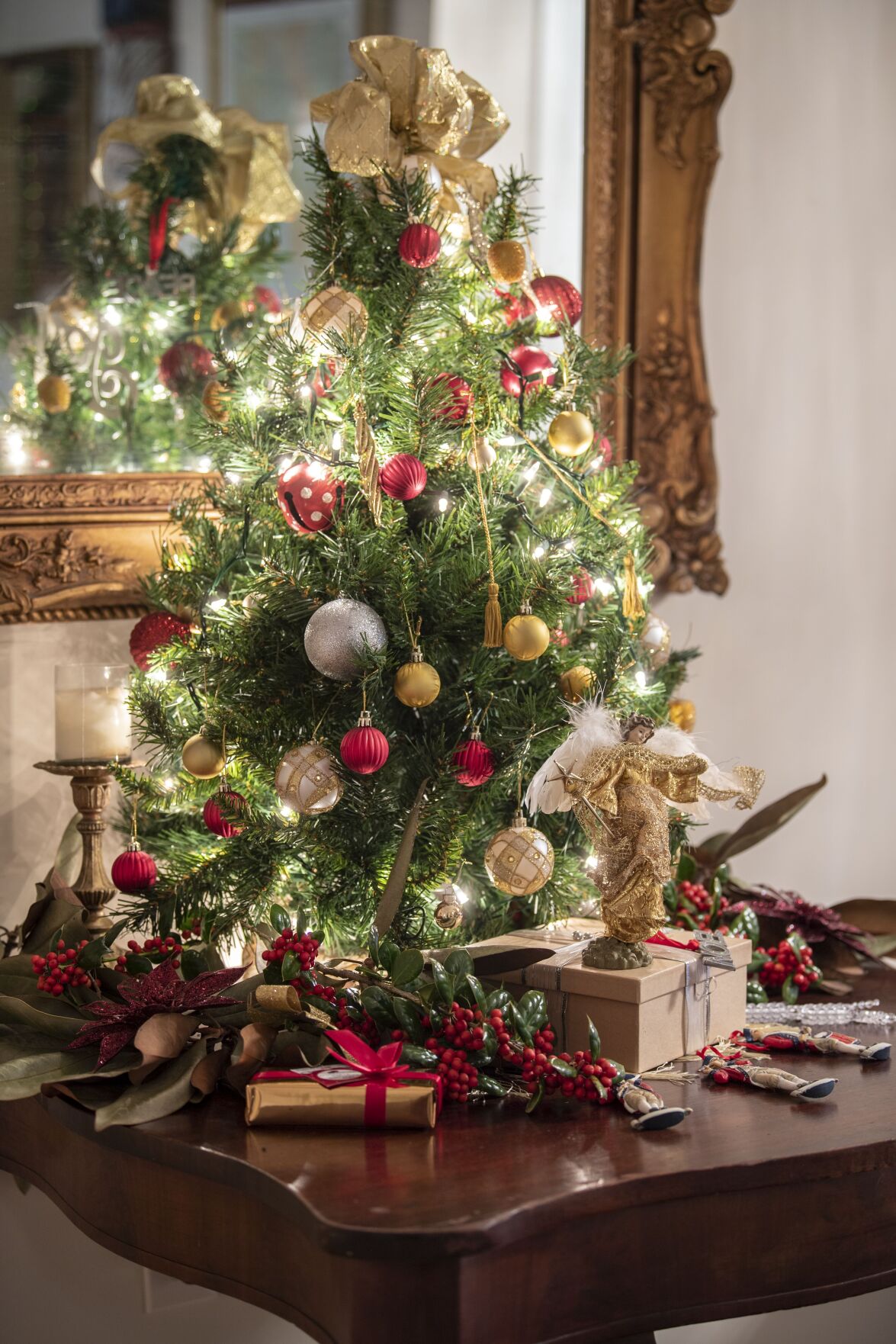 An accent table in the entry hall  displays an eclectic mix of holiday decorations. 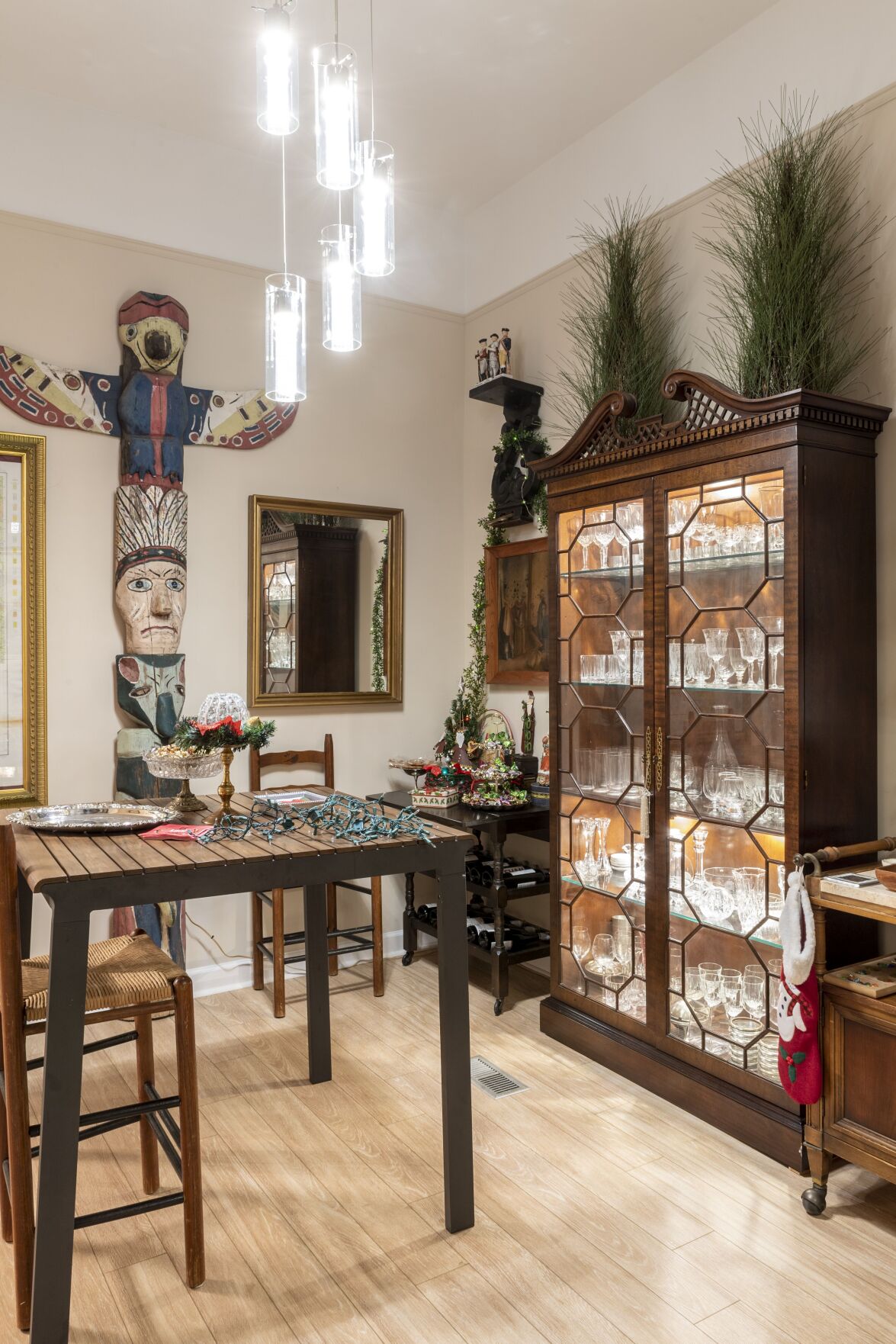 The couple's bar, which occupies the former nursing home's dispensary, features a totem pole from the Pacific Northwest; 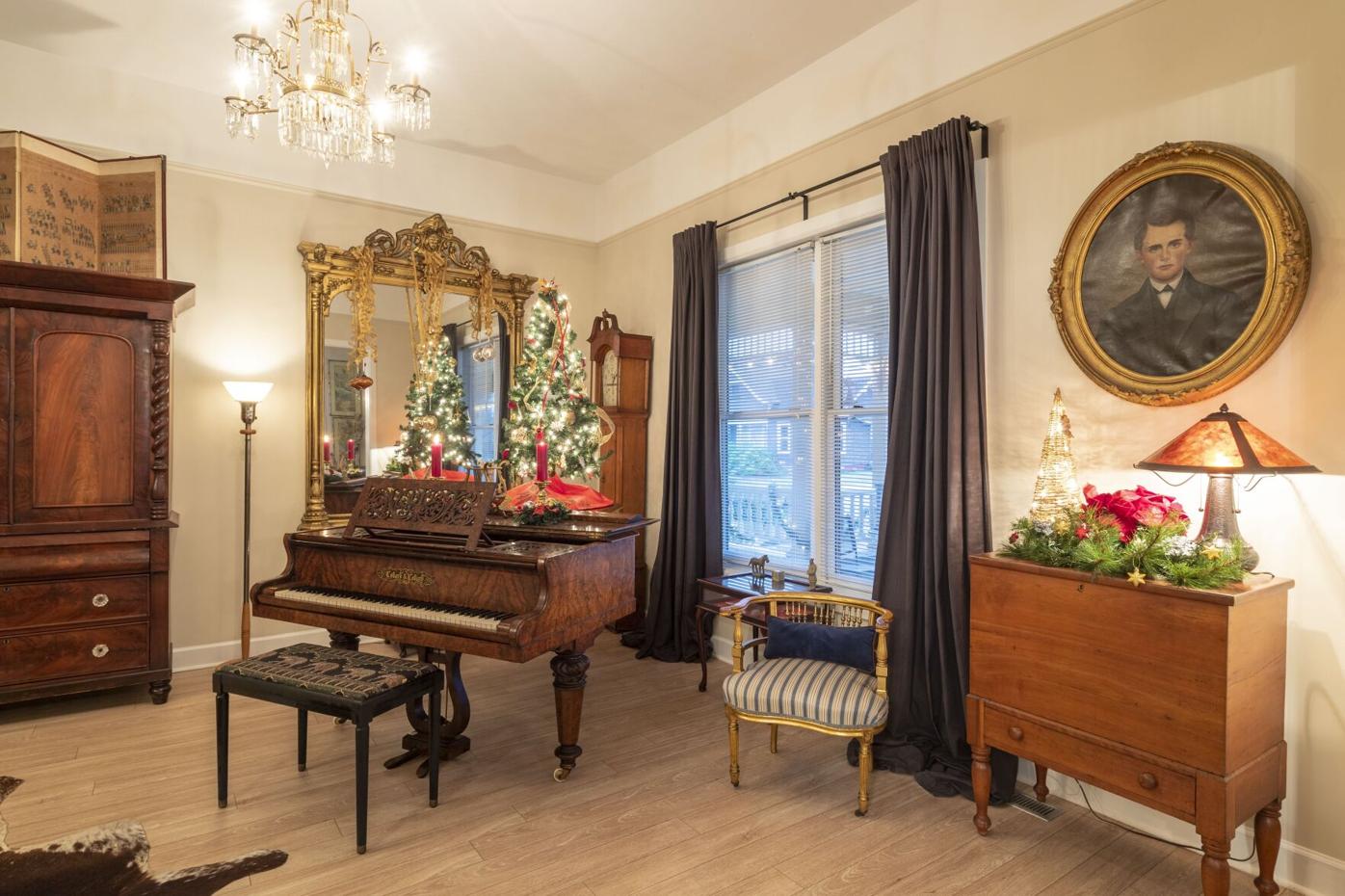 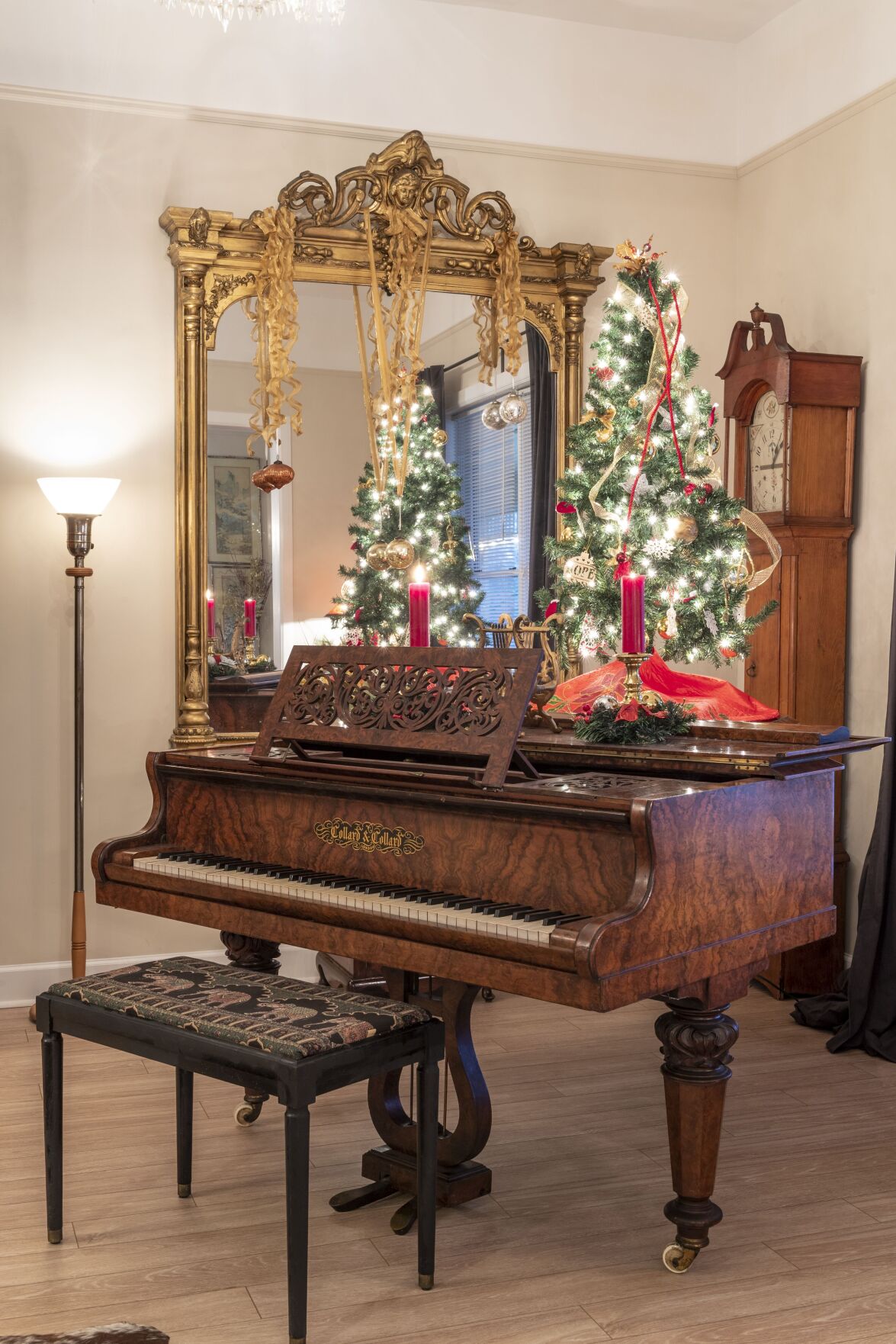 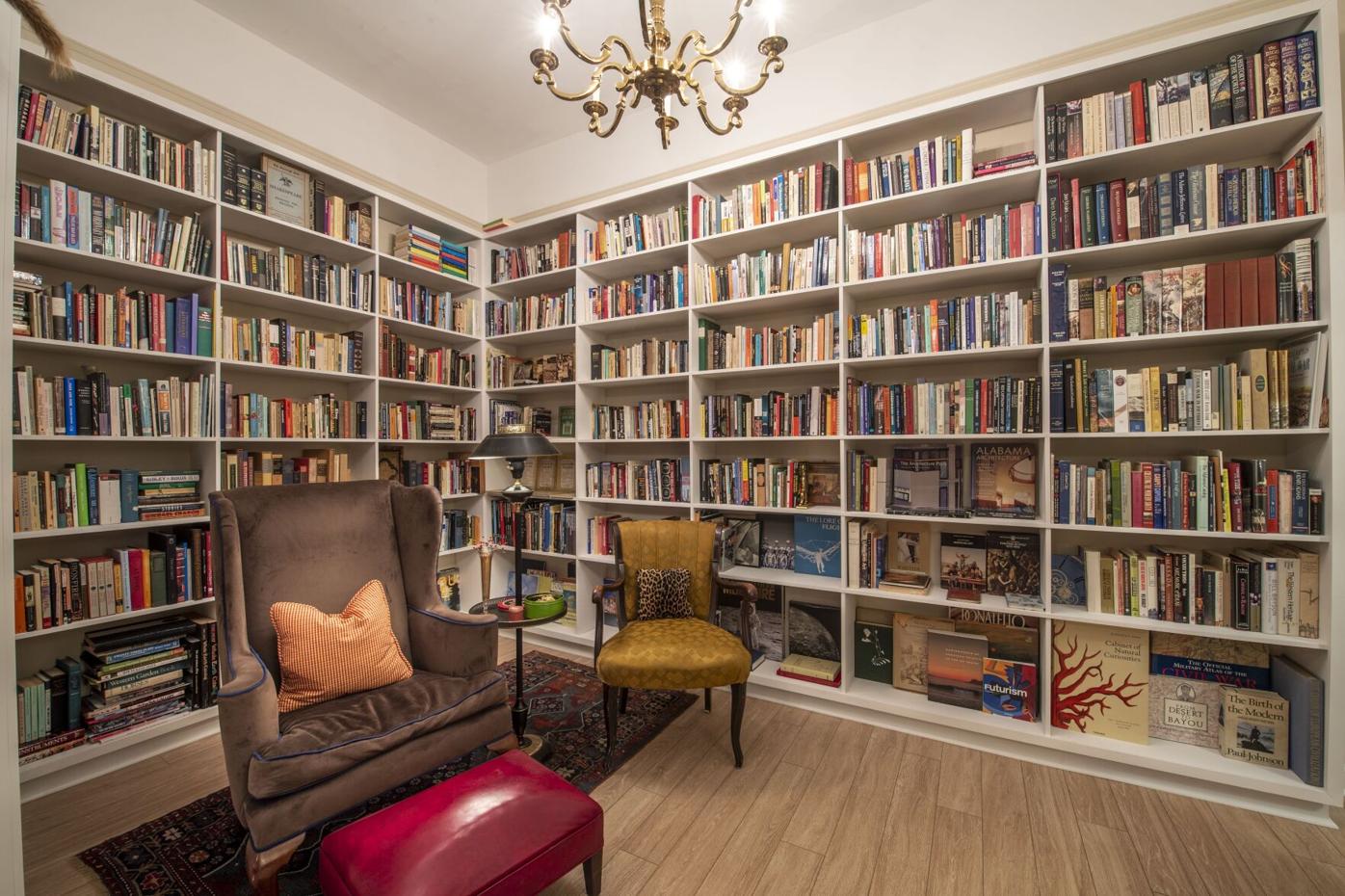 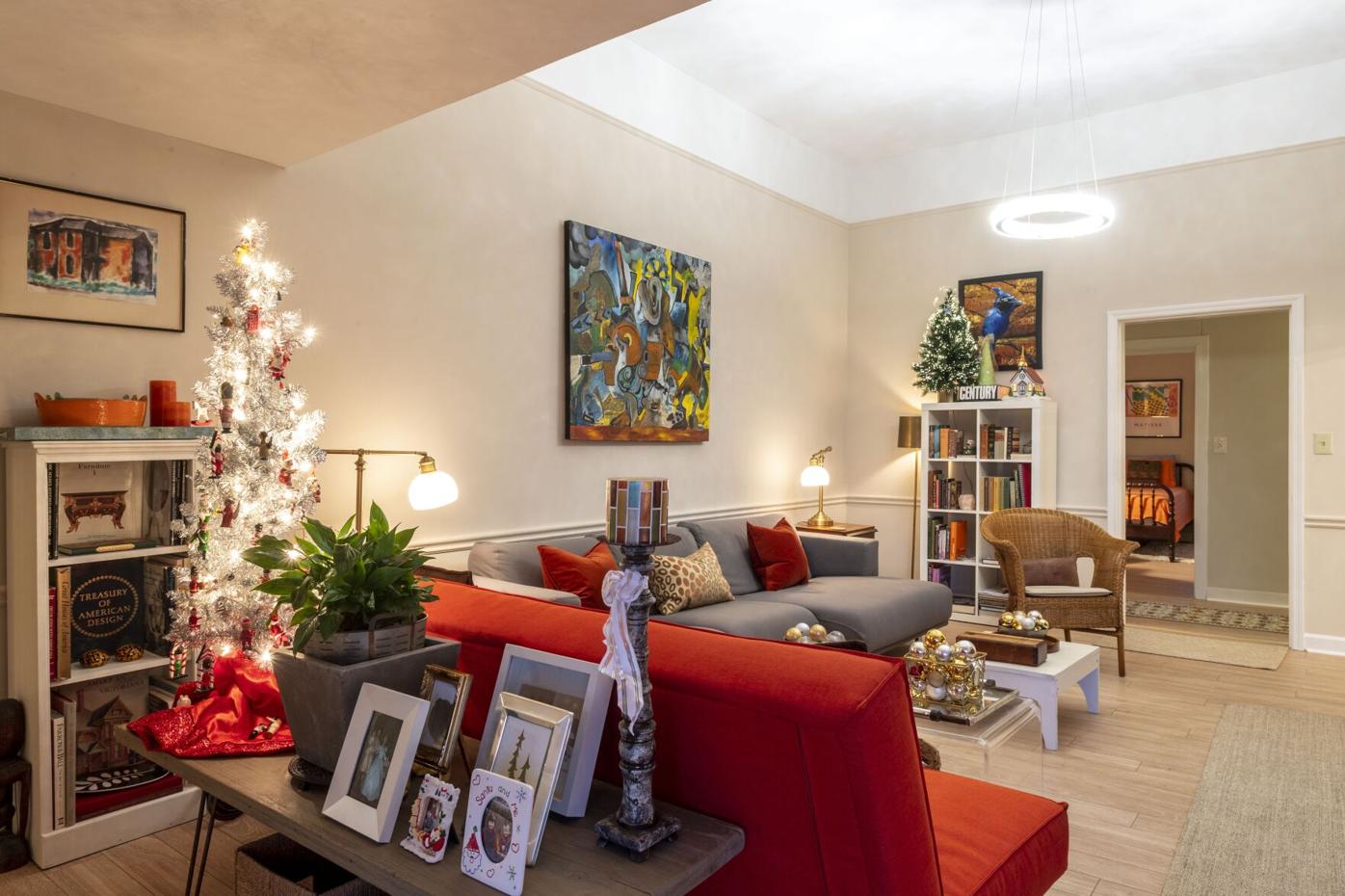 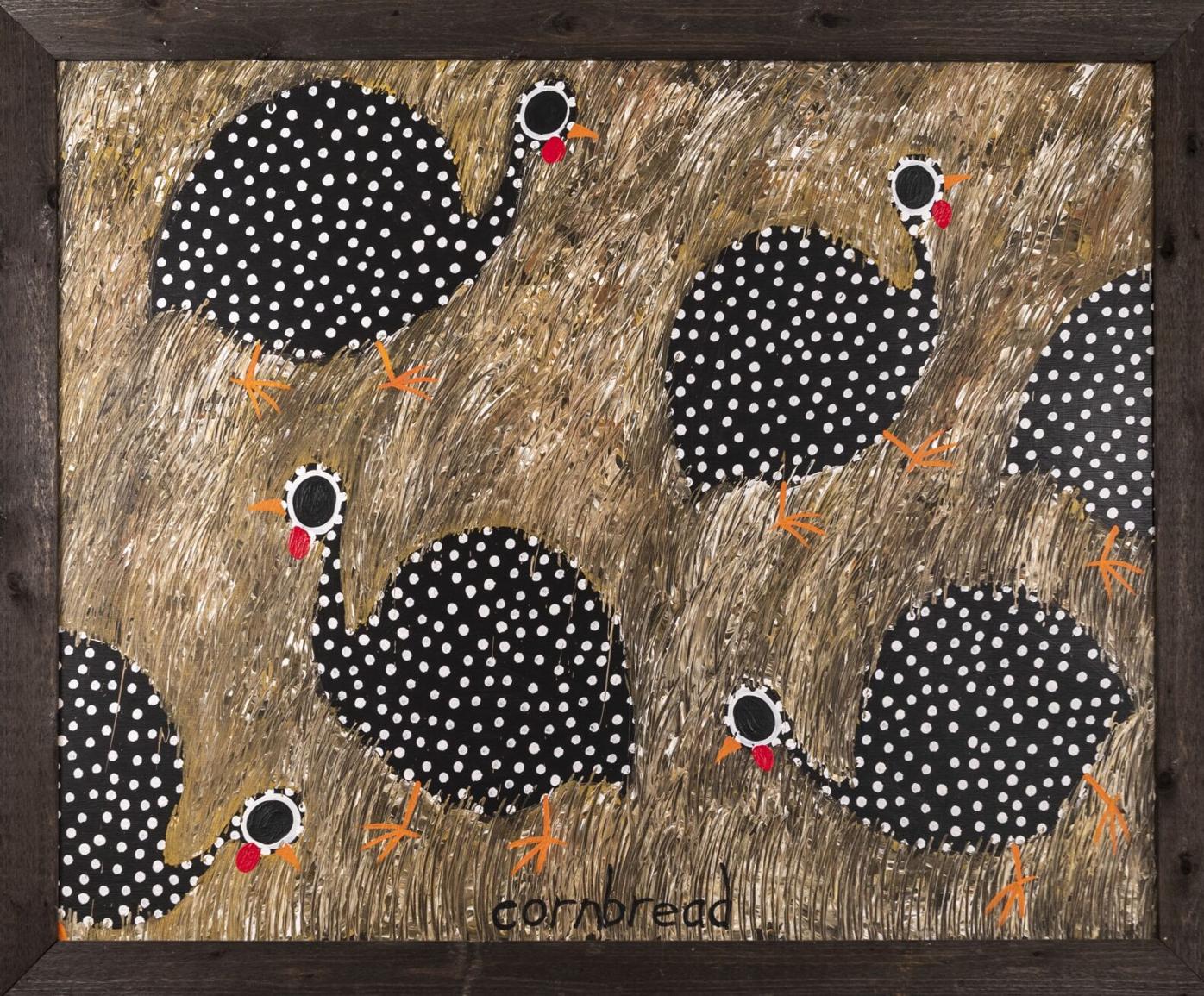 A commissioned piece by John "Cornbread" Anderson hangs in the kitchen 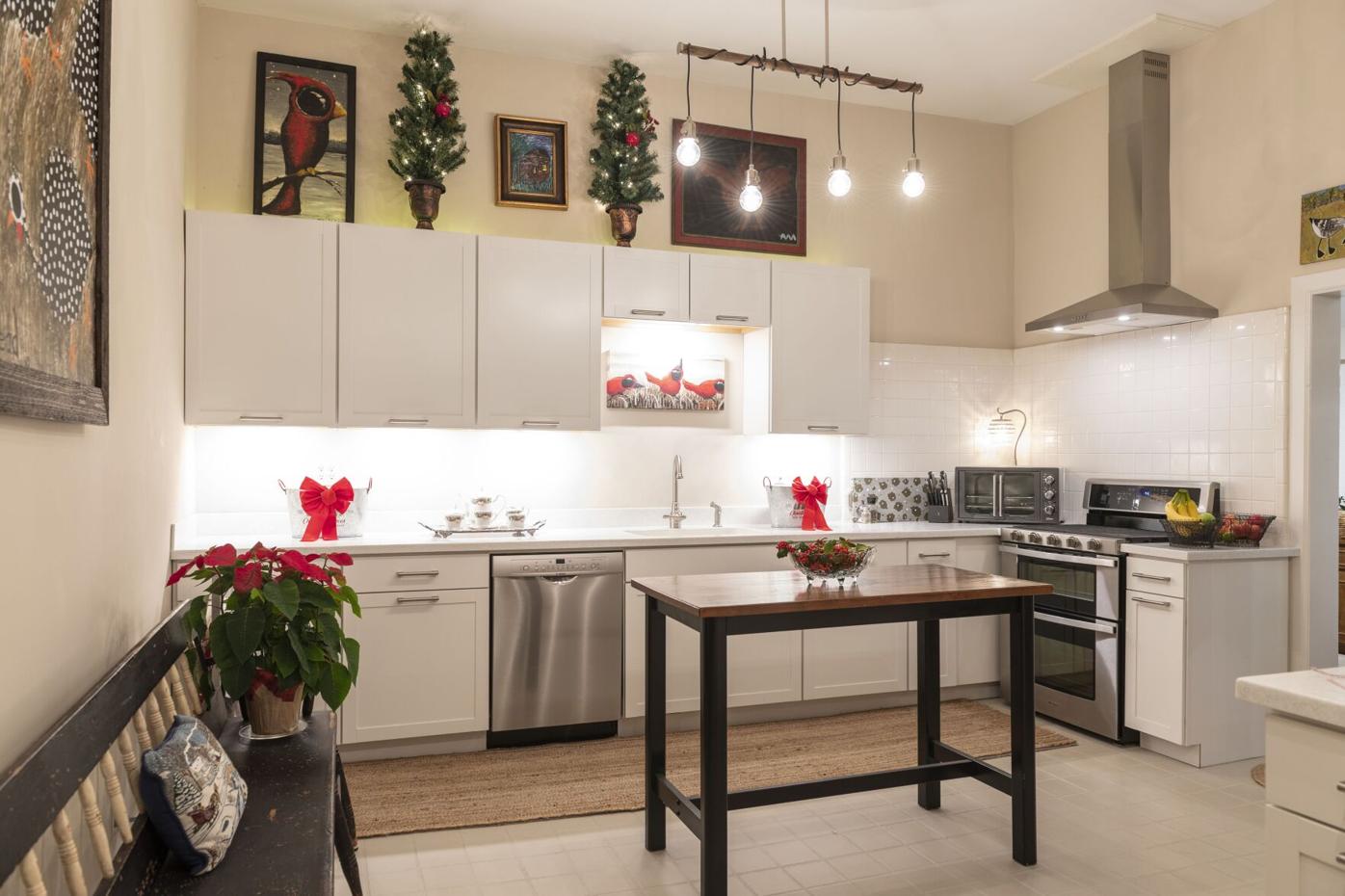 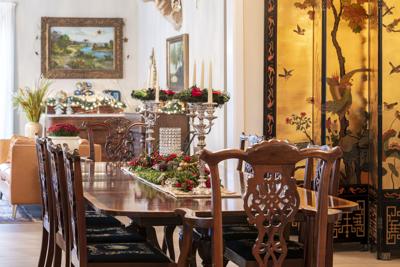 In the dining room, chairs needlepointed by a family member surround the table next to an installed 1890s Edwardian mantel and a 1760 corner cabinet from Virginia

A wedding gift, the den's op art painting can be viewed from the entry

An accent table in the entry hall  displays an eclectic mix of holiday decorations.

The couple's bar, which occupies the former nursing home's dispensary, features a totem pole from the Pacific Northwest;

A commissioned piece by John "Cornbread" Anderson hangs in the kitchen

Dadeville native Anne-Marie Timberlake Jones and her Huntsville native husband, Stokes, were living in an 1875 federal-style house in Georgia when they began planning their move back to Alabama in 2019.  Lovers of history and art, the couple wanted a home to accommodate their family and friends while also providing a spacious, yet warm, setting in which to enjoy their various collections.

“We were inspired by the downtown Dadeville revitalization and felt like this might be a small way to contribute,” Jones explained.

The couple was attracted to a historic home on Columbus Street, partly for its 6,500-plus square footage, but also because they wanted to preserve the life and history of the landmark home.

The sprawling Queen Anne abode was originally built by Thomas Sturdivant in 1881 to be near the bank he ran on the Dadeville courthouse square. Years later, the Sturdivant House became known as Easterwood’s Nursing Home, and was used as office space for a healthcare company until the Joneses purchased it.

“We bought the house in June of 2019 and started working on it,” she said. “It took more renovation to ‘de-institutionalize’ it than we anticipated. We would still be at square one if it weren’t for the genius of my brother, Sam, who constantly amazed us with what he could do.”

In the process of transitioning the 20-plus rooms into a cohesive livable space, they created settings to showcase the historic pieces collected over the years. They retained the home’s original Victorian foyer, starting with a long, wide hall from which the living spaces extend.

Eclectically furnished, the home hints at the couple’s appreciation of pieces with stories. A chair constructed of a matching pair of steer horns was given as payment to Stokes’ grandfather, a Nashville attorney, by a Texas oil man in the depression. The original bobcat hide lies beneath the modern upholstery.

Above the chair is an abstract artwork entitled, “Midnight Jumbly.” This was acquired from a friend in London who bought it directly from a crime lord in British Guiana who fancied himself to be a real artist.

“My father worked with Von Braun at Redstone,” Stokes said, “and during NASA’s first Saturn 5 engine test, the clock stopped as the blast rocked half of Huntsville. My father decided to leave its hands respectfully still after that.”

On the other side of the hall is an 1820 Kentucky plantation secretary of cherry and mahogany – with a secret fold-down drawer enabling receipts to be taken or payments made at a moment’s notice.

The parlor to the right serves as a music room with an adjacent alcove library. The center of this room is a stunning 1877 English Collard & Collard baby grand piano, with burled walnut veneer, sometimes flanked by a full standup bass. Behind it, an 1840s gilded French mirror and china cabinet with scrolling columns.

The library is one of Stokes’ favorite places in the house. It is located close to his office, where he works remotely as part of team designing financial trading software.

“It’s my version of a man cave but covered in books that are as musty as possible, instead of screens. The last thing I want to see after testing technology all day is anything with pixels,” said Stokes, who studied philosophy and anthropology in London.

Family memorabilia in the library includes a 1903 photograph of the John Hopkins Medical Staff featuring his step-grandfather, who later came to Nashville when the South was bereft of doctors.

On the left side of the great hall, the couple installed an 1890s Edwardian mantel, which some close friends contributed when they saw how well it fit the dining room from the same period. Chippendale chairs needlepointed with care by a family grandmother line the dining table. On the right of the mantel is a large 1760s Virginia corner cabinet with primitive carved turn-pulls, which houses an exquisite set of 1930s Susie Cooper art deco porcelain from Burslem, England.

The former nursing home sunroom on the far side of the dining room is now the Jones’ bright, spacious living room. Windows covered in gauzy draperies fill the room with light, and lovely seating arrangements, which complement a gathering of any size, invite conversation on the French Empire settees and mid-century leather sofa.

The former medicine dispensary on the main hall was converted into a bar and reflects the couple’s personal style and taste for old items. The bow of a canoe outfitted with shelving stores liquor bottles near a totem pole from the Pacific Northwest. A 1908 Tallapoosa County soil map – showing the area prior to the flooding to create Lake Martin – hangs near a pub table.

In the media den, a wooden carving depicts the Hindu god, Shiva, ready to punish sinners with his club. He resides peaceably alongside a Red Grooms original painting on the opposite wall, and next to a 1972 yellow and orange optical art oil that was a wedding gift once displayed at the Birmingham Museum of Art. The curved screen TV rests on a Chinoiserie-style sideboard opposite ’70s-style sofas bordered by two inlaid Italian chests of drawers. Over one sofa, a pop art painting of Richard Saul’s “War Machine” collects all the colors and styles in the room.

Adjacent to the den, which previously served as the nursing home dining room, the kitchen posed one of the greatest challenges of the renovation.

“It had been an industrial kitchen in the nursing home days, and it had been gutted by the time we bought the place. We had to start almost from scratch.” Jones said. “The tile was in good shape, so we didn’t want to tear it up and put it in a landfill, but it was awful. We found a treatment for the tile to make it something we could use.”

They added a galley to one wall with plenty of counter space and use an island table with receding seats for informal dining. The refrigerator fits in an alcove of its own, and a butler’s cabinet configuration provides a staging area at the entrance to the kitchen from the den.

One full kitchen wall is devoted to an 1840s Ohio train station bench, the seatback of which can be flipped from one side to the other, so waiting passengers would be looking the right direction when the next train arrived. Dominating the wall above is a large commissioned painting featuring North Georgia artist John “Cornbread” Anderson’s iconic spotted guinea hens.

In the adjacent laundry room, the cabinetry features stainless steel and glass doors that were upcycled from the fire extinguisher cabinets previously spaced throughout the nursing home. Above the sink hangs a delicately hammered platter, crafted from melted aluminum by local men around the time Lake Martin was created; it was purchased at the old gas station that once operated next to Floyd’s in downtown Dadeville.

The laundry room previously opened onto a concrete loading dock, but the owners recently converted it into a treehouse-like deck for grilling, complete with privacy fencing.

Bedrooms and other utilitarian spaces line the outer halls. The couple opened the walls between two resident rooms to create a master suite; then, they turned other bedrooms into an exercise room and an office for each of them. Currently, the home has six guest bedrooms, as well as one guest office space, though they are still playing with the finishes.

Throughout the home, classic mid-century modern furnishings blend warmly with antique sofas and cabinetry, and modern art shows beautifully with Indian artifacts that Stokes collected years ago. These pieces include matching male and female busts – an Indian Maharaja and his Maharini, which he purchased in Bombay in 1988; horse-bird figurines on the dining room mantel that are from a Hindu temple; and a carved wooden Jesus statuette.

“The Jesus statue is surprisingly also Indian,” Stokes explained. “It came from a Catholic church in a former French colony in South India.”

Sparkling chandeliers – some dripping with history and others clearly modern – draw the rooms together, reflecting the unique perspective, appreciation for art and love of history that the Joneses brought with them when they came back home to Alabama.