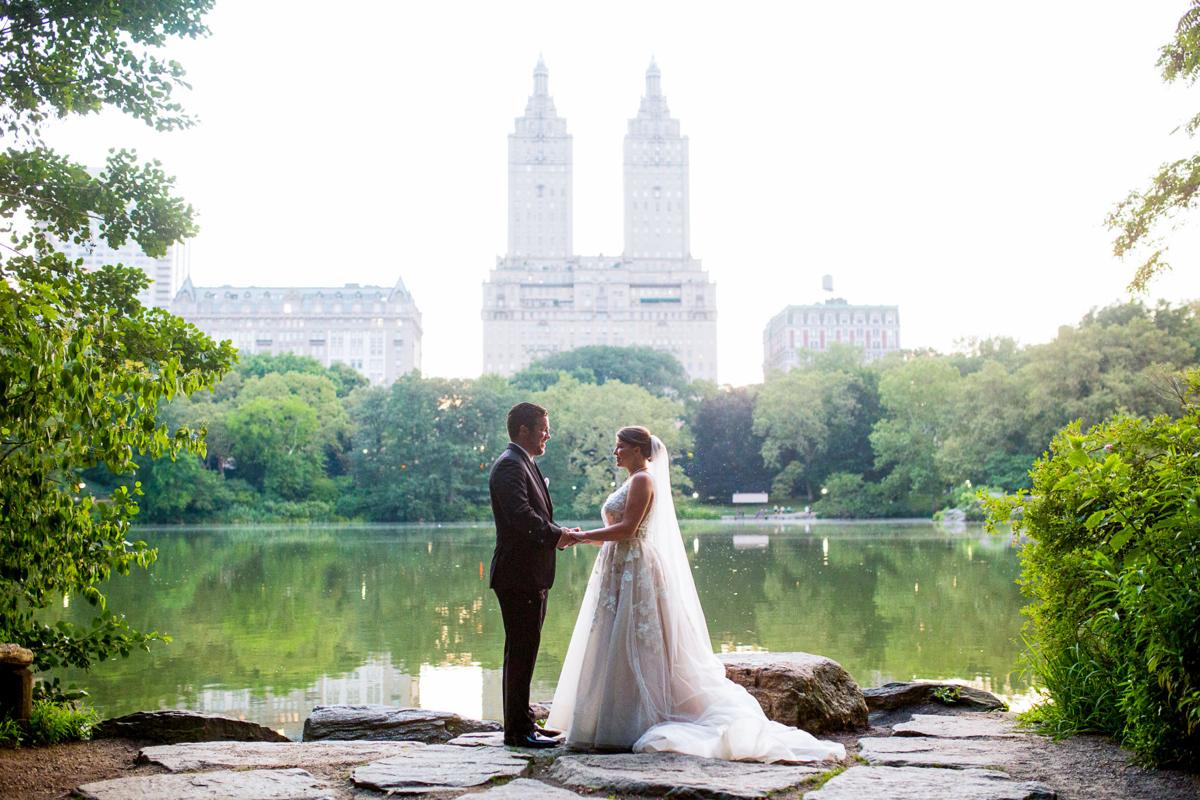 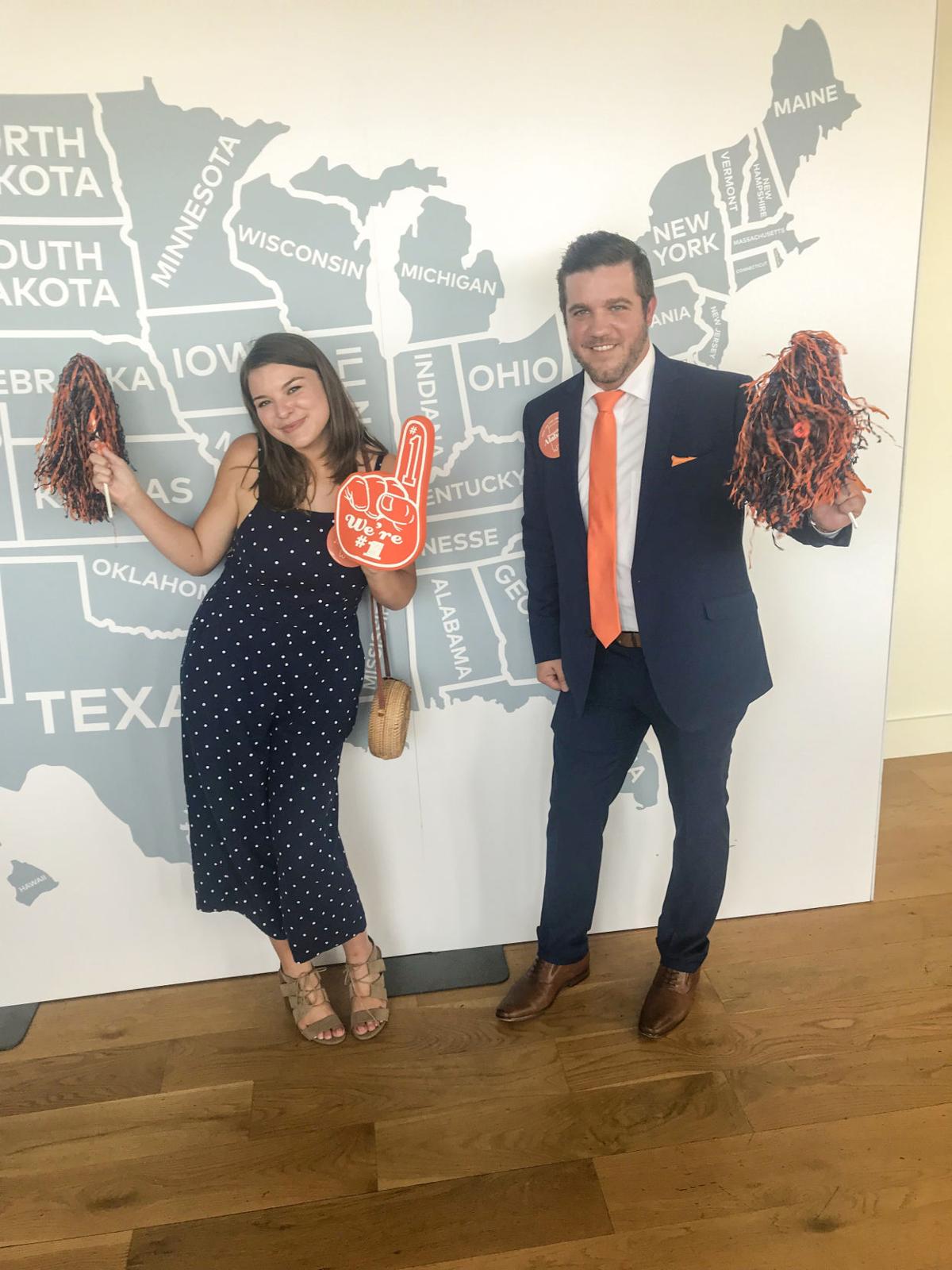 Kimberly and Dan McClellan sport their Auburn gear representing the state of Alabama at a couple's mixer. 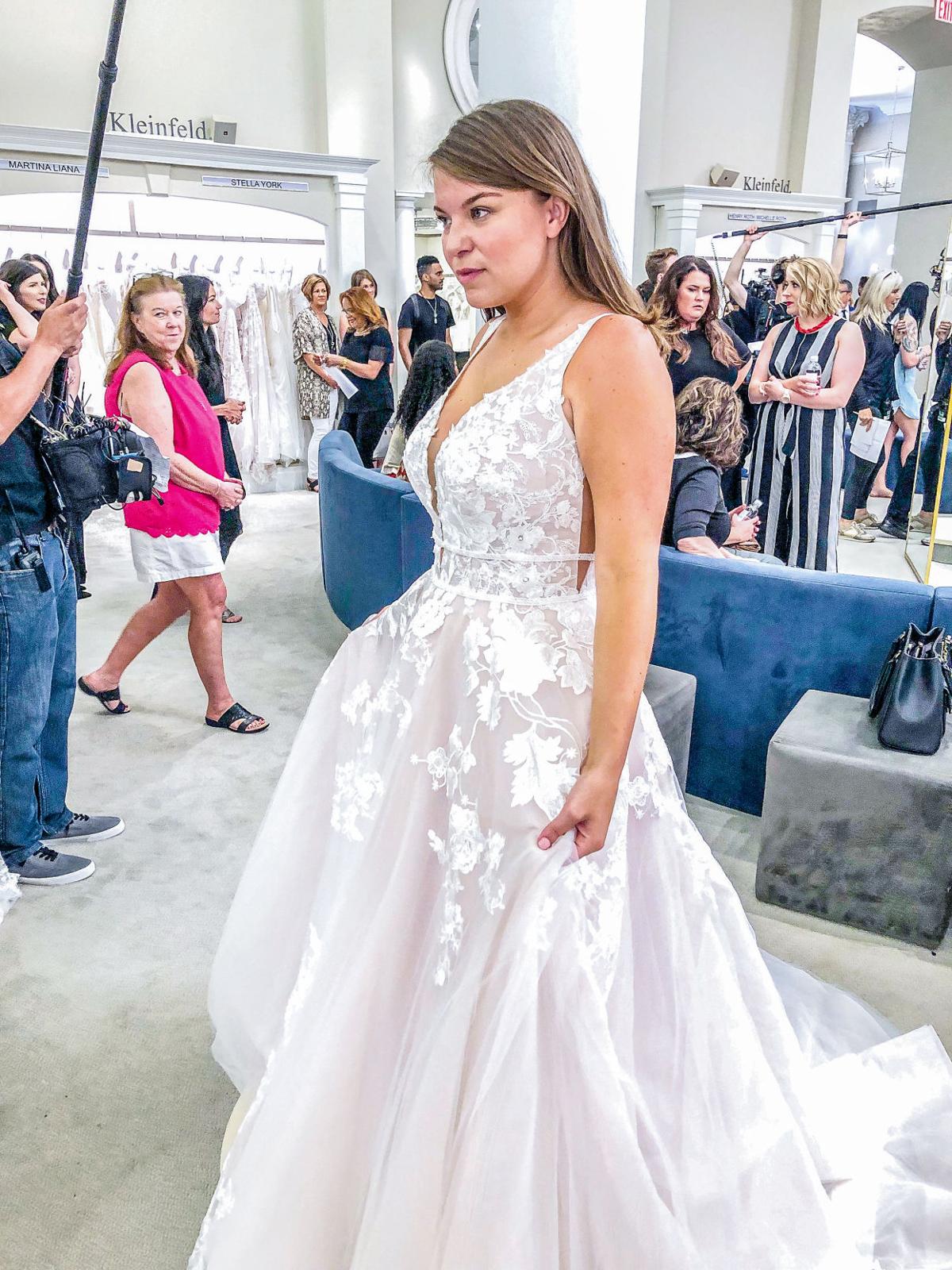 Kimberly McClellan tried on seven dresses at Kleinfield Bridal and ultimately chose this elegant gown made by Essence of Australia. 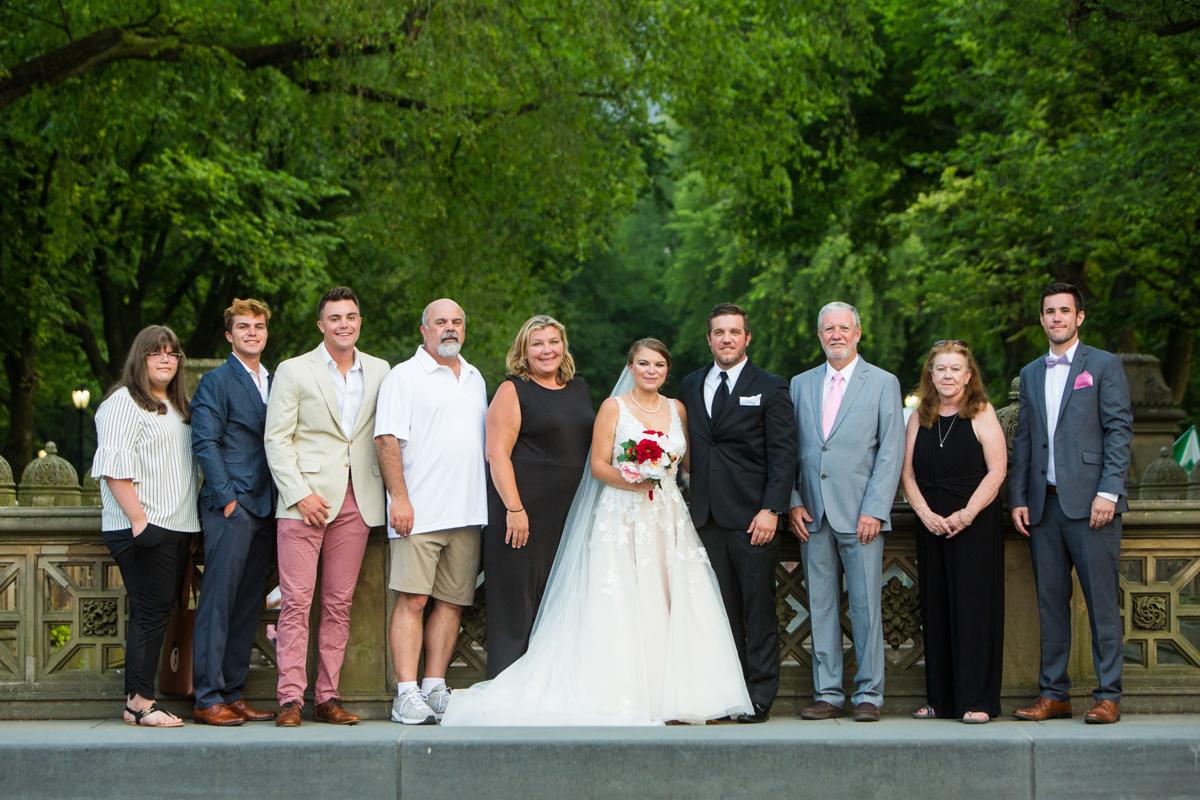 The couple's families attended the nuptials in New York City 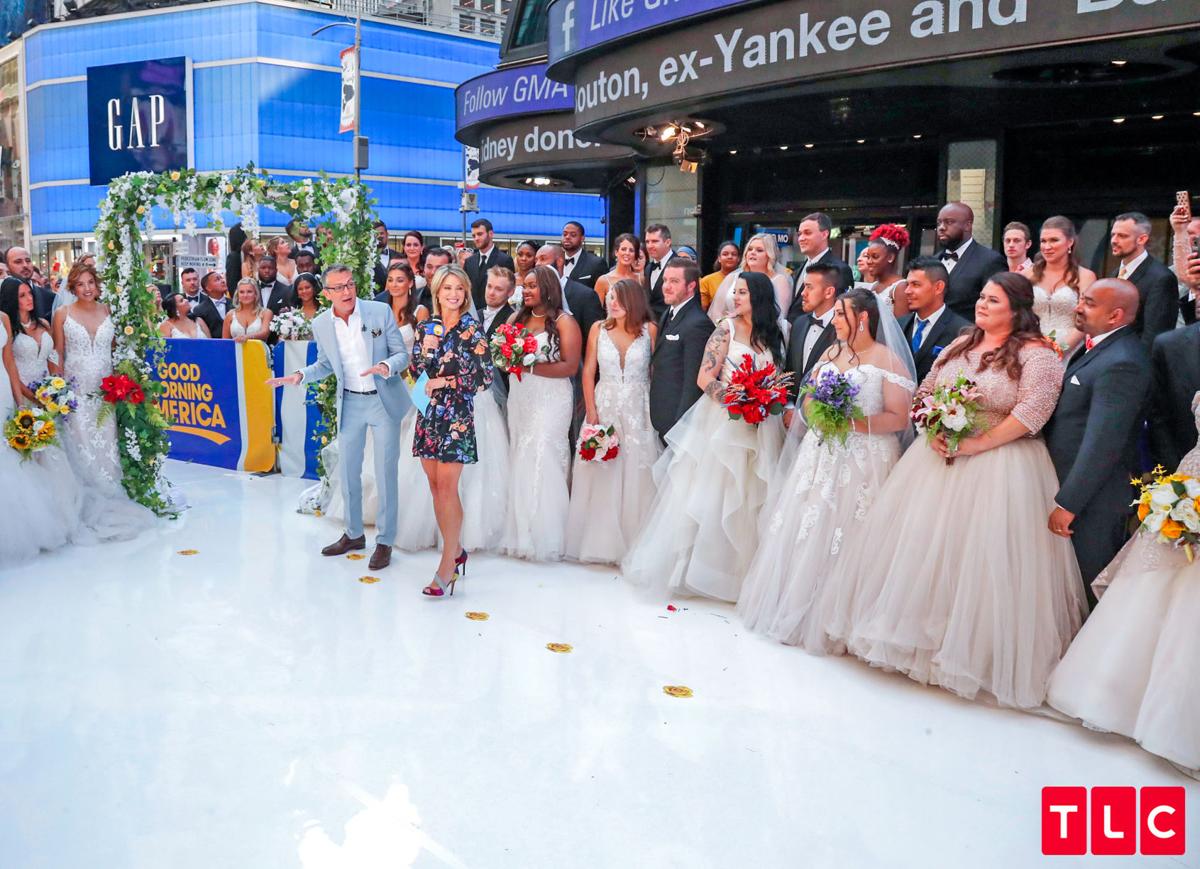 Kimberly and Dan McClellan sport their Auburn gear representing the state of Alabama at a couple's mixer.

Kimberly McClellan tried on seven dresses at Kleinfield Bridal and ultimately chose this elegant gown made by Essence of Australia.

The couple's families attended the nuptials in New York City

Alexander City natives Kimberly and Dan McClellan waited seven years to get married but when they did, they shared their big day with 51 other couples from around the U.S. at Bethesda Fountain in New York City on July 10, 2019.

Kimberly McClellan applied to TLC’s Say Yes to the Dress America on a whim following encouragement from co-workers, who were confident she would be chosen.

“They said, ‘You’re too weird to not put on TV,’” said McClellan.

Working at an advertising agency in Birmingham, McClellan heard about the opportunity from a Discovery Network representative who came in for a regular meeting and alluded to the show.

Say Yes to the Dress America is a new 10-episode series hosted by TLC that aired this month starring engaged couples from every state, Washington, D.C., and Puerto Rico. The two-hour finale special will celebrate the couples saying, “I do,” at one communal wedding officiated by Say Yes to the Dress host Randy Fenoli.

“The wedding was really the weirdest way to get married but also I don’t have a point of reference because it’s the only time I’ve been married,” McClellan said. “I think it was good. It was fitting for me. I’m not very bridal and haven’t prioritized planning a wedding. So when we were chosen, we decided why not? Everything was already set up; we just had to show up.”

The couple, who met while attending Auburn University and got engaged in Disney World in 2012, found out they were chosen as the Alabama representatives one month before the big day, and brides picked out their dresses from Kleinfield Bridal with just two days to spare.

“I tried on seven dresses total, and I liked all of them, so it was hard to choose,” said McClellan. “We were all paired with a stylist, and you could choose whatever dress you wanted. We had our run of the store and were filmed every second.”

McClellan ultimately cut down her selections to two dresses – both from the same designer, Essence of Australia – but went with the one she felt was more extravagant.

“The other one I really liked. It was very simple and a nice shape. But I can wear a nice-fitting dress any day. I’m not going to wear an over-the-top gown all the time. If ever there was a day to pick something like this, now is it,” she said.

McClellan and her husband spent about a week in New York City, and both of their families were able to join in on the festivities. The show hosted a mixer for all the couples, who were encouraged to dress like their states.

“We decided to dress in Auburn gear because part of our statement on our submitted video was that whether Alabama or Auburn fans, college football is a lot of fun and the whole state is supportive,” she said.

Every aspect of the show was filmed, but McClellan said, she is unsure how much of her story will be included in the finale cuts, as there were 10 featured brides.

“I loved the experience. I don’t need to be the center of attention anyway, so I didn’t mind sharing the spotlight with the other brides,” said McClellan.

Earlier in the day, brides got to get ready in the famed Loeb Boathouse at Central Park.

At the wedding ceremony, each bride walked down the aisle one at a time to meet her groom; then, the couples walked to a certain spot to stand during the vows.

The McClellans were the first couple married because the weddings were done alphabetically by state. The couple’s immediate family members were guests, and some strangers also stopped to watch the ceremony since it was held out in the public during late afternoon.

Also, each bride had bouquets made with her state flowers, along with other state-specific details.

“Everything was pretty much done for us,” McClellan said. “We got to show up and be a part of it.”

McClellan wore her pearls to the ceremony, which were a graduation gift from her grandparents, and she added her own personal touch.

The reception immediately followed, also in the Boathouse, with champagne and a cake made by Cake Boss star Buddy Valastro.

When they returned home, the McClellans hosted a post-wedding shower and party at Dan’s parents’ house on Lake Martin. The couple is set to go on their honeymoon to Puerto Rico in February.

Say Yes to the Dress America premiered at 8 p.m. Jan. 4 on TLC, and will air every Saturday at 8 p.m. until the big finale on March 7.