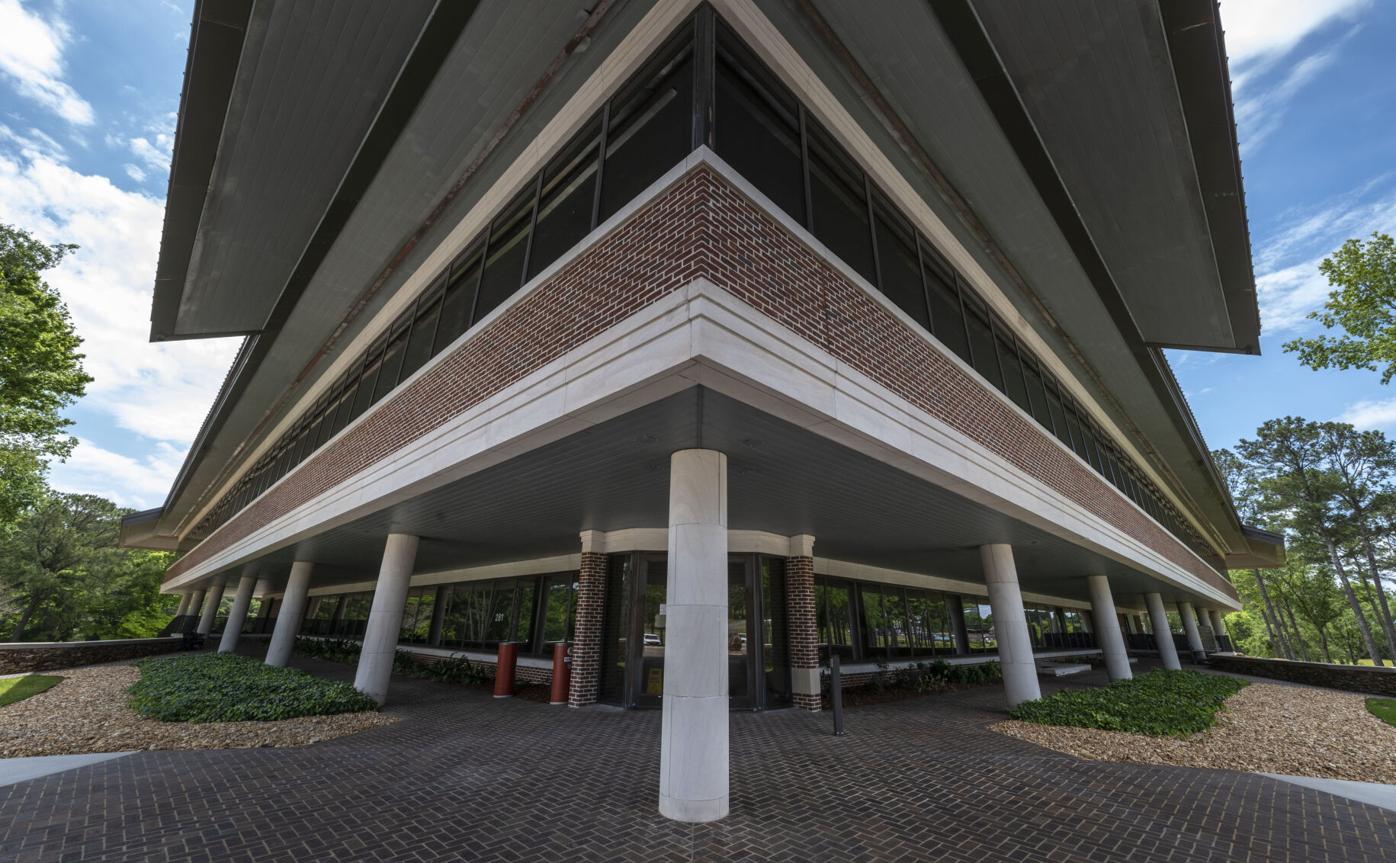 The old Russell Sales Office is now home to most of the City's employees. 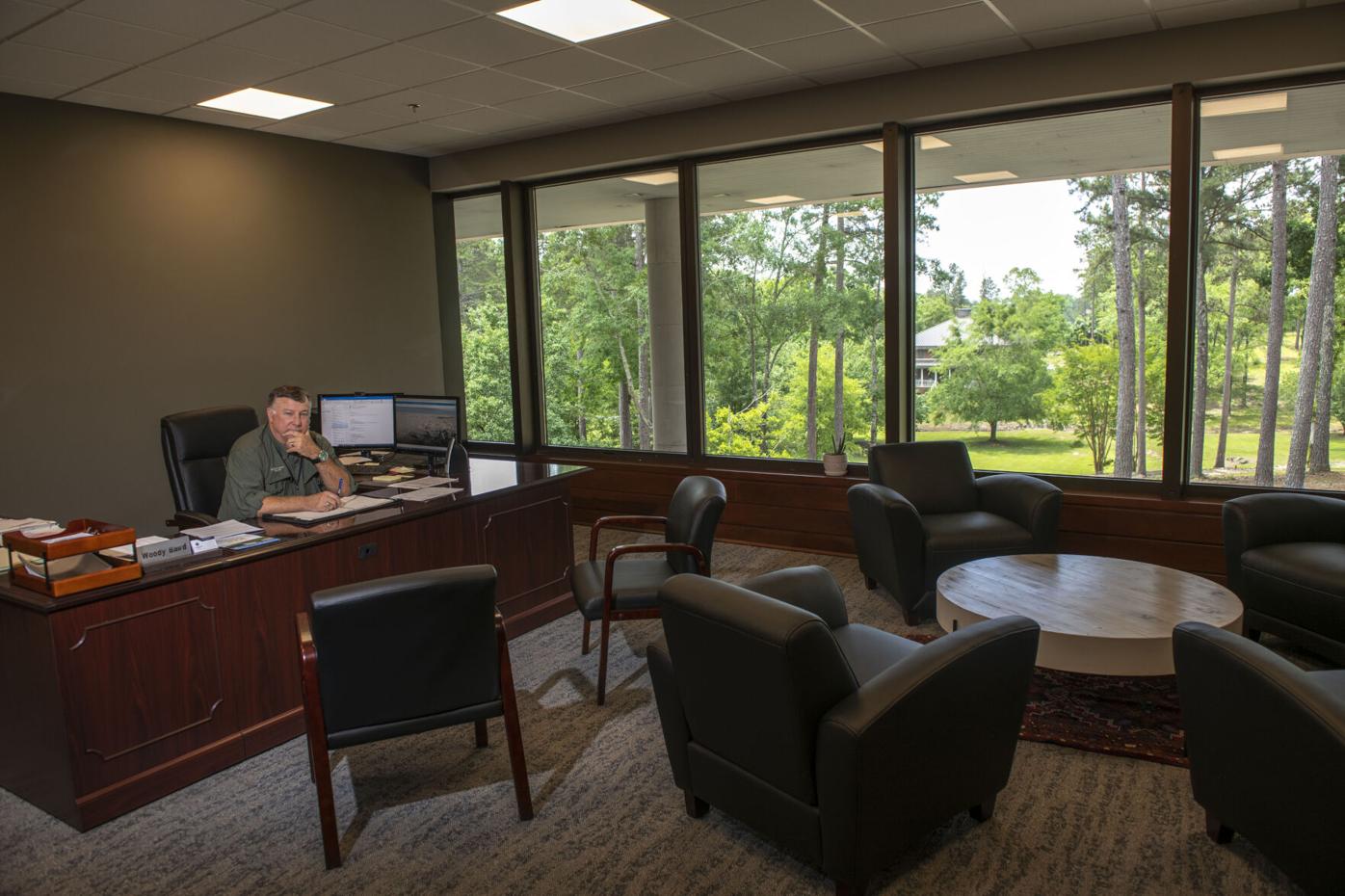 Baird enjoys the spaciousness of his office and the view of 280 from the giant picture window. 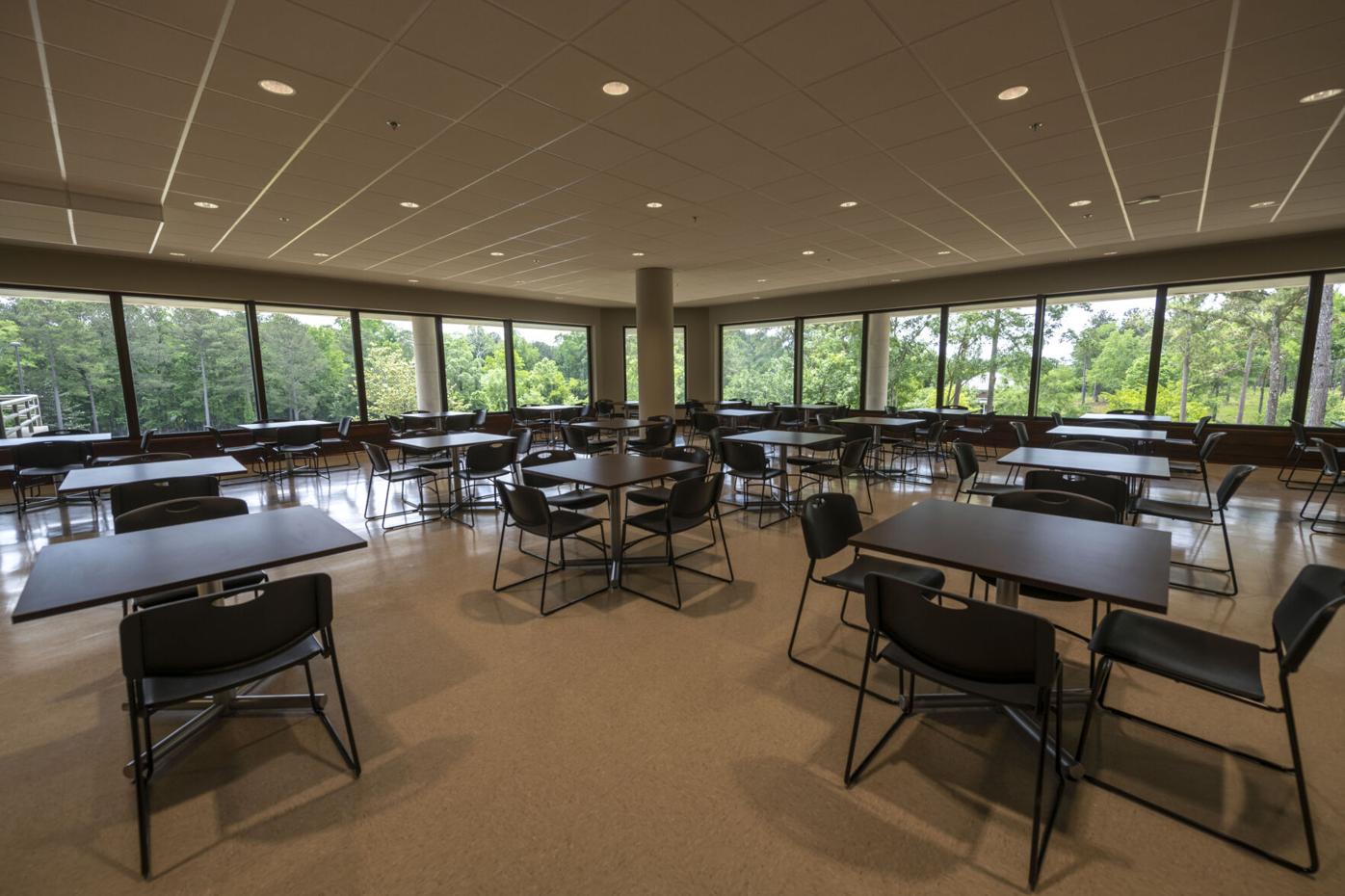 Employees and visitors can relax and enjoy a beautiful view while in the cafeteria. 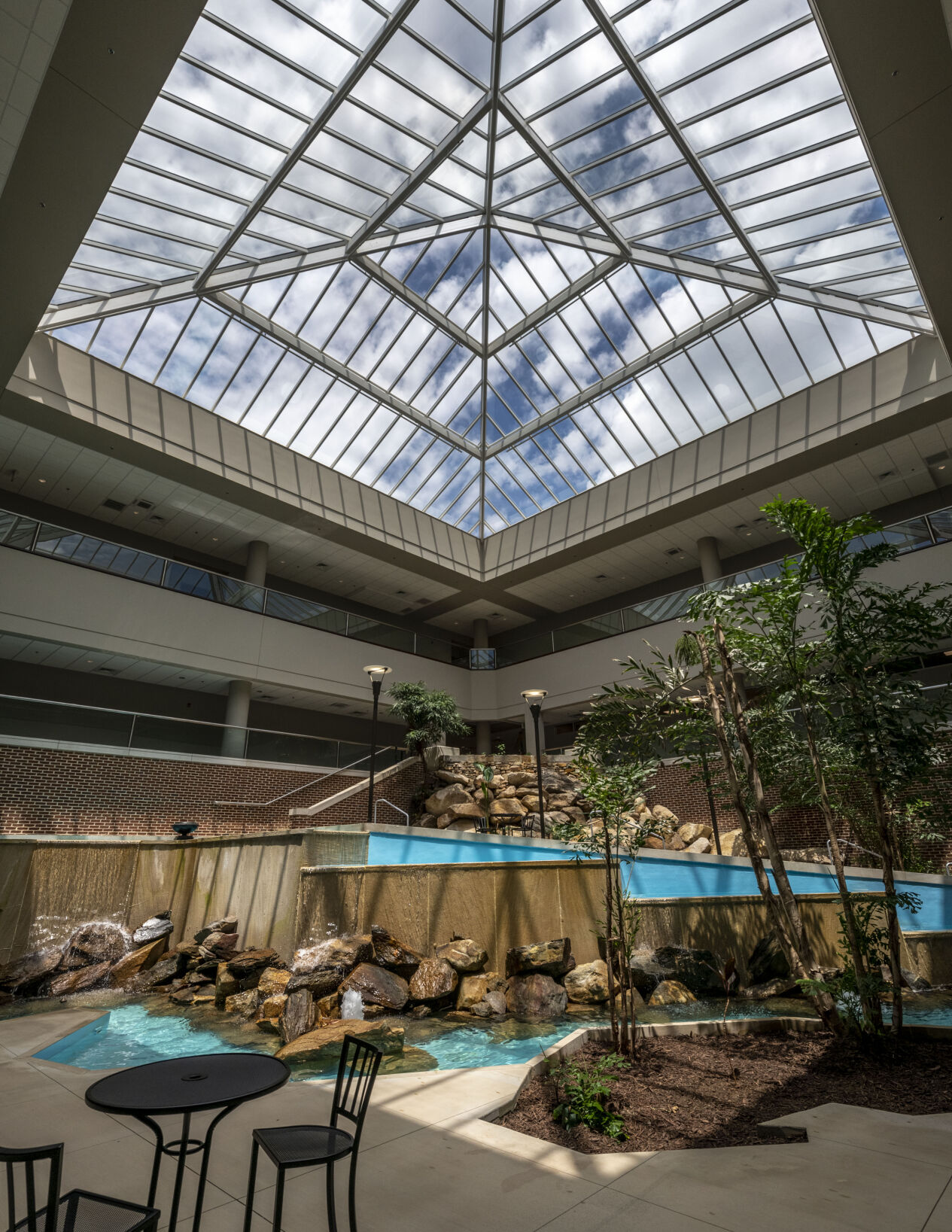 The waterfall in the atrium was revived after years of standing still, new plant life enlivens the sun-filled space and gives-way to an earthy and grounded vibe. 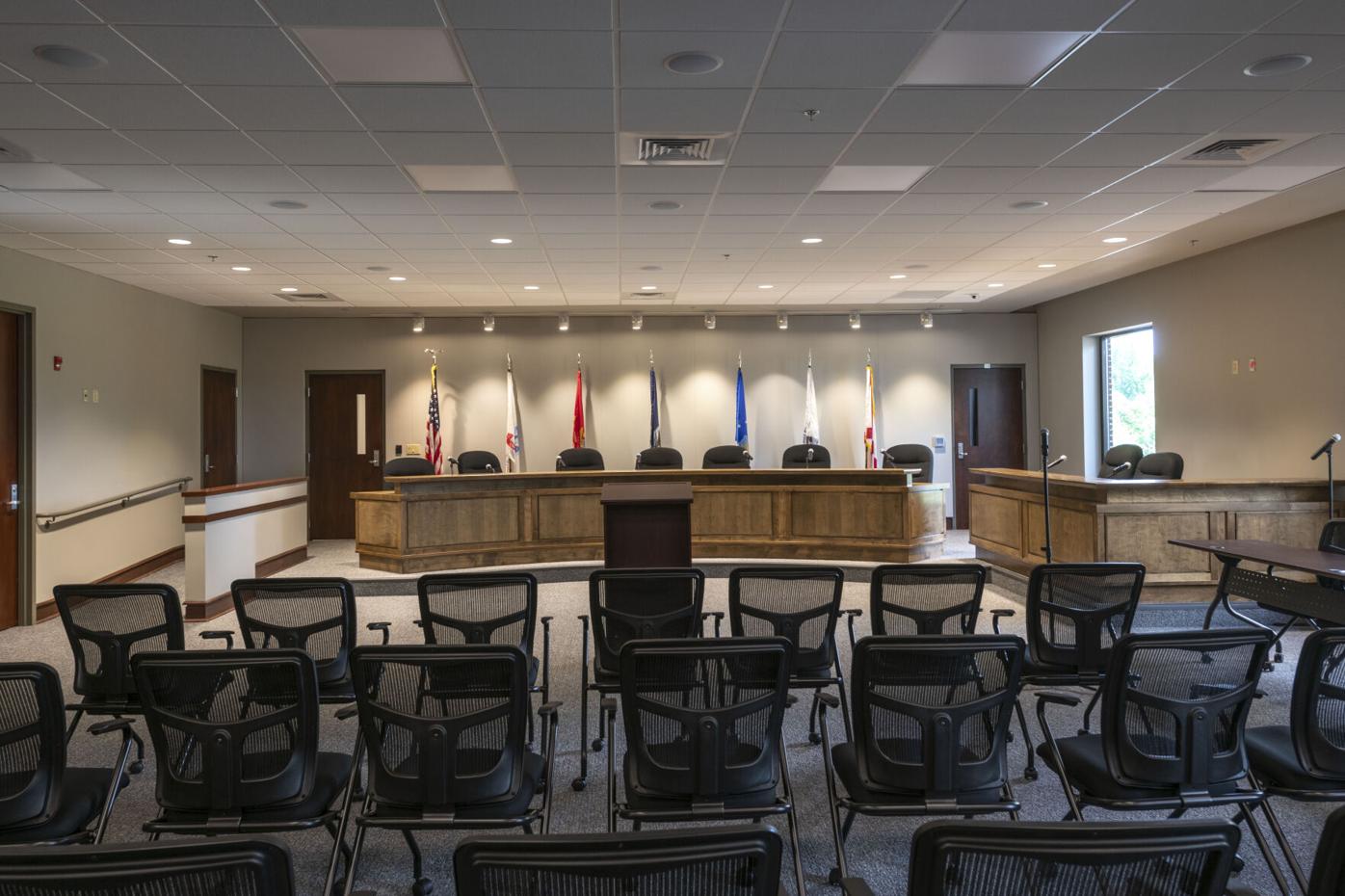 The council chamber doubles as the city courtroom. 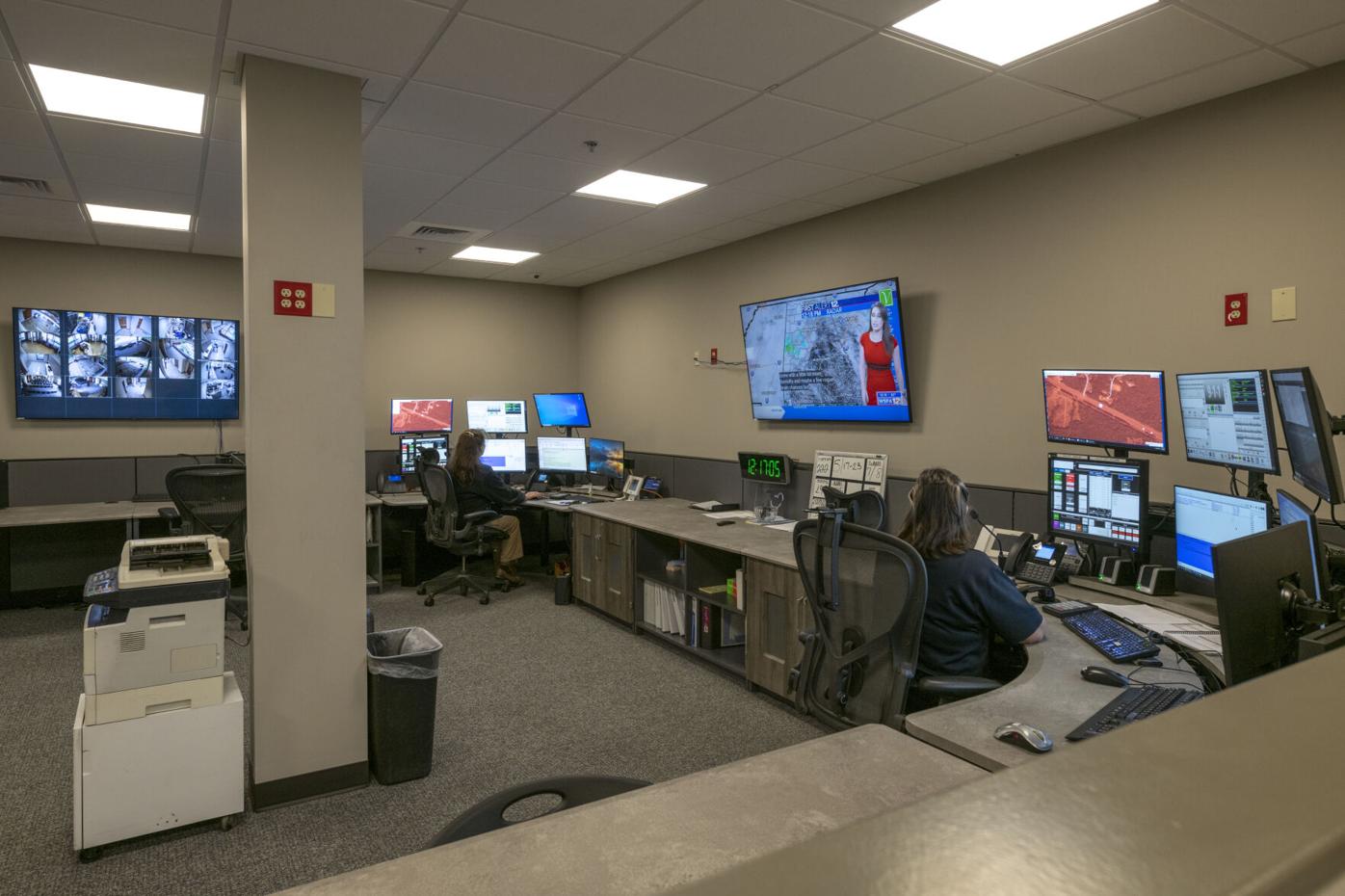 Dispatch is working with state-of-the-art equipment.

The old Russell Sales Office is now home to most of the City's employees.

Baird enjoys the spaciousness of his office and the view of 280 from the giant picture window.

Employees and visitors can relax and enjoy a beautiful view while in the cafeteria.

The waterfall in the atrium was revived after years of standing still, new plant life enlivens the sun-filled space and gives-way to an earthy and grounded vibe.

The council chamber doubles as the city courtroom.

Dispatch is working with state-of-the-art equipment.

Rust, raw sewage and mold are just some of the hot buttons that used to be discussed at city council work sessions. Those same complaints are what fueled the interest in building or purchasing a new building, perhaps one that could house all city departments under one roof. Those same conversations would later result in the purchase of a building deemed the Alexander City Municipal Complex.

On April 2, 2019, city officials signed paperwork to take ownership of the former Russell Sales Office and guesthouse. A sprawling 85,000-square foot building that sits on 56 acres just off U.S. Highway 280 in Alexander City.

The space in the new facility allows for all departments to be consolidated into one central hub, bringing about 200 of the city’s more than 300 employees to consolidate under one roof.

The significant change here: Past locations were scattered about on the downtown corridor in a multitude of buildings, some of which were in disarray and in severe need of repair.

It was the vision of the late Mayor Jim Nabors to bring all of the city employees together in one central location. It just so happened that the old Russell Sales building would make way for his vision to become a reality; however, after sitting vacant for nearly 20 years, the building was far from move-in ready.

The roof, once bronze, had faded to green and was more vulnerable than not; having leaked for years, the inside of the building was utterly damaged. Everything needed to be ripped out and totally renovated, but this was a project that the Alexander City City Council got behind.

The City hired architects JMR+H to evaluate the building. Due to their prestigious track record with previous renovations, such as the old Alabama Supreme Court building for the Retirement Systems of Alabama and many other municipal complexes throughout the state, city officials were confident that JMR+H could handle a large-scale project like that of the Alexander City Municipal building.

Central Contracting of Wetumpka was awarded the bid for renovations and worked hand-in-hand with JMR+H and city officials to ensure accuracy during demolition and the reconstruction phases of the project.

Upon initial demolition, Central Contracting of Wetumpka determined that the bones of the building were still in excellent shape and that it was just the roof and walls that suffered the most damage over the years while the building sat empty.

But the building no longer sits empty. The Alexander City Municipal Complex is now a bustling, business-oriented mecca, nestled right off of the main highway in Alexander City.

At the new municipal complex, citizens and visitors alike are greeted with smiles upon entrance. Visit the information desk to determine what department is where and exactly how to get there. The most common and sought-after area of the building is the utility payment center. It is located just through the main entrance and past the police station on the right, making it easily accessible to those needing to pay bills or have services connected.

Just past the utility office, the ceiling gives way to an atrium that was once home to exotic plants and trees, as well as a waterfall. During remodel, this feature was cleaned up and revived. New vegetation has been planted, and the waterfall, although slightly reconstructed, would once again cascade through rocky terrain and plummets into a serenity pool, never-ending.

Mayor of Alexander City, Curtis "Woody" Baird, has contributed to the plant life in the atrium and surrounding offices.

“I planted a banana tree on the bottom level, and just recently, I planted a pomegranate tree down there, too. We had to take some of the trees out originally, but we tried to retain as many as possible.”

Rocks and trees again surround the water feature, including the herb garden planted by Baird on the main level, right by the stairs, overlooking the waterfall.

The roof that adorns the atrium remains glass and steel, just like the original structure, and allows for natural light to pour into the building, a feature that the employees appreciate, Baird said.

Tables and chairs also employ the atrium’s bottom level, giving visitors, officials, citizens or employees a comfortable spot to relax just outside of the city council chamber, which doubles as a courtroom.

The chamber is set up with convertible chairs and tables that can be arranged in many ways. The lighting features are easily set at different levels, allowing for an ambient feel or a strict white light for those more serious moments in the courtroom.

“When we have work sessions, I like to be able to see each other and talk,” Baird said. “So the council chamber and courtroom can be set up any way we want. It also has a great sound system and lighting system. We are working on a video system. I would love to get a good video system up and running.”

The 911-dispatch center is state of the art and was funded by the Tallapoosa County E-911 Board. The center now houses four systems versus two, and contains multiple computers, screens, microphones and telephones and sits adjacent to the Emergency Operation Center.

“The EOC consists of radios or any electronic device that could be used in the state of emergency,” Baird said. “That is where we go if we need to talk or plan. The night of the First United Methodist Fire, this place was a madhouse, but we were on it, and we had our equipment ready.”

The municipal court has also been moved to the new building, although that was not always the plan.

“The municipal courts handle tickets, fees, etc., and we couldn’t leave them over at the old courthouse by themselves,” Baird explained. “They needed to be near or with the police department. We wanted to move them over here, but the space allocated for the office was not a big enough space for two people to operate it successfully.

“I reached out to the CJ Coley Courthouse and inquired about moving the municipal court there, but after going round and round with them, it was obvious that they did not want us there. So I got with the clerk of court, the city judge and the police department, and we came over here and figured out how to make it work here,” Baird said.

After careful consideration, it was determined that the council chamber could also be used as a courtroom. The payment window that was previously installed upfront near the police station was relocated to the available office space near the elevators on the main floor.

“We want these women to be protected,” Baird said. “So we made sure that there was a barrier to do business through. They are collecting money owed, signed warrants, whatever needs to be done, and we did not want the public to have direct access to them.

“So now when they have city court, we can use this end of the building, and it will be a quick in and a quick out for everyone involved. Citizens can go straight down the stairwell or elevator to the courtroom, get adjudicated and then come back up, go by the window, pay their fine or whatever and then they are out of the door.

“It made the most sense to just work it out on our own.”

Directly across the way, there is a cafeteria that seats up to 200 people indoors and an additional 50 on the balcony. The cafeteria is donned with glass walls and overlooks the hilly terrain of Alexander City. It is yet another scenic place to escape to, during a strenuous workday or a lengthy court case, for a hot cup of coffee or to get a bit of fresh air.

The new municipal complex is jam-packed with beautiful and relaxing features, all of which were a part of the original Russell Sales Office. But when Alexander City purchased the 85,000-square foot building, the intention was to house all or most employees within one central location. It just so happens that the scenic views came as a perk.

“Everyone loves my office,” Baird said. “I still need to put my touch on it, but the floor-to-ceiling windows always seem to wow people. I’m just fortunate to have a spot that allows me to bring nature into my space like this. I also like being able to see 280.”