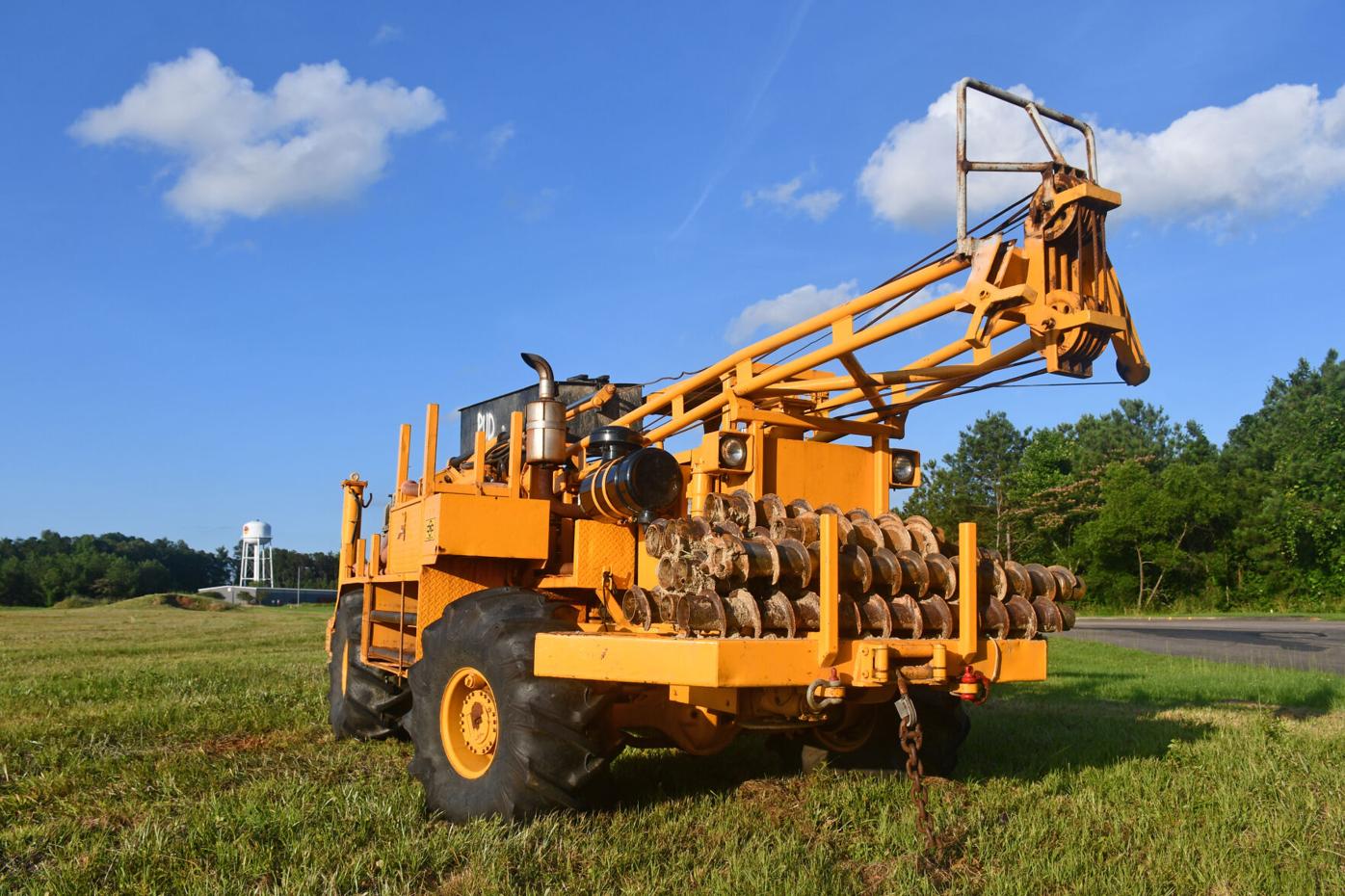 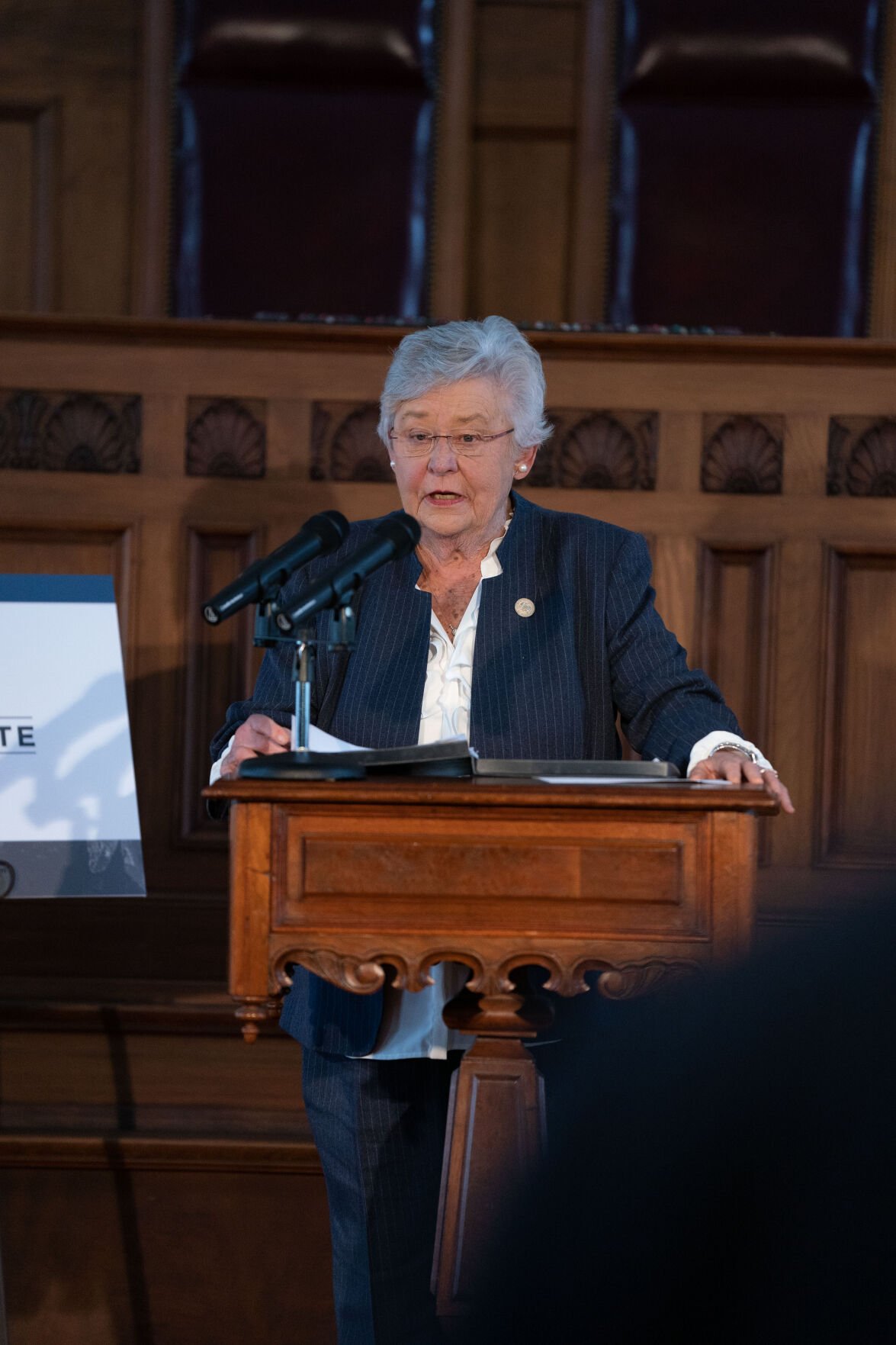 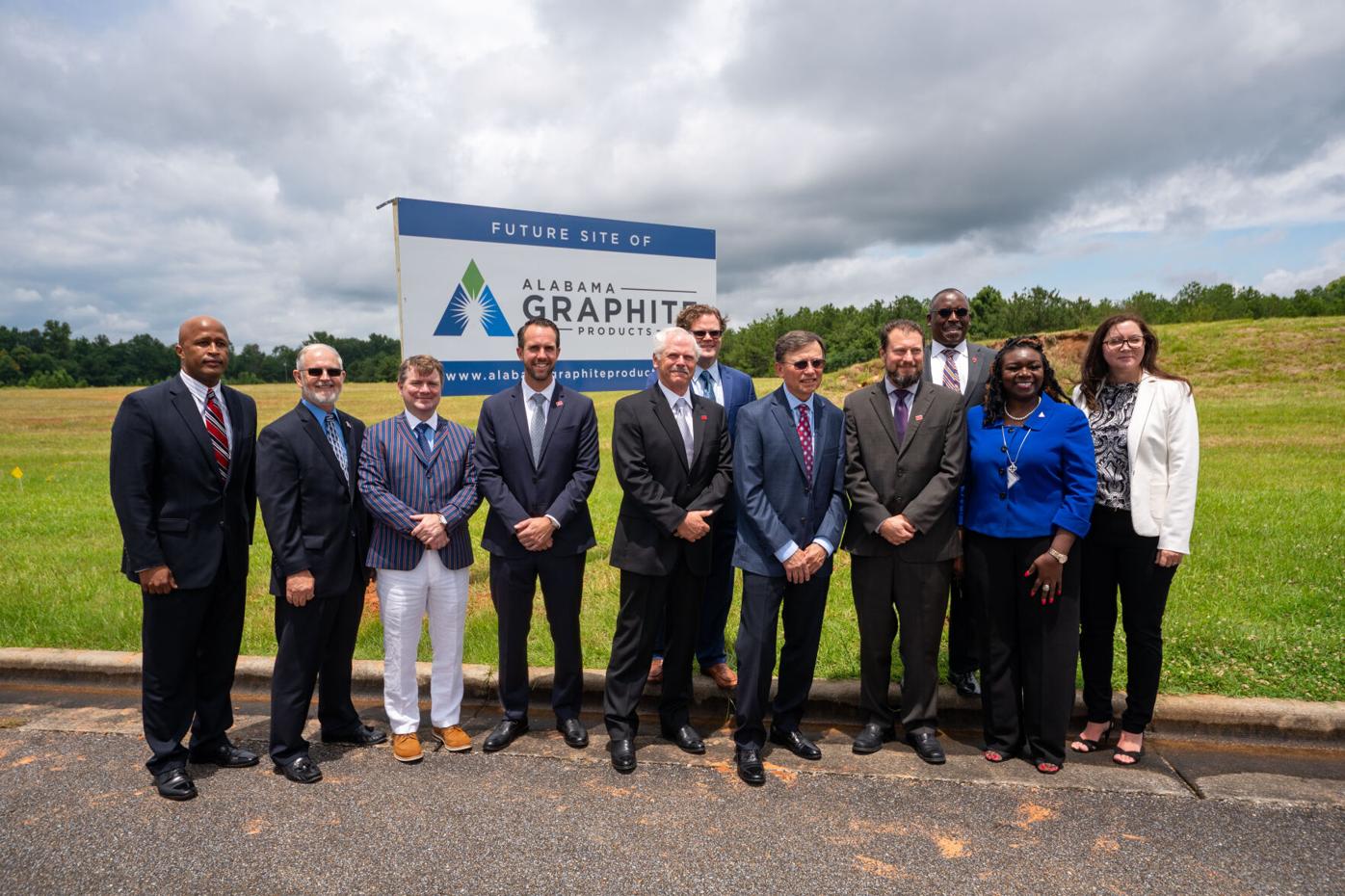 Representatives of Westwater Resources, Tallapoosa and Coosa counties and the EDA unveil the future site of Alabama Graphite. 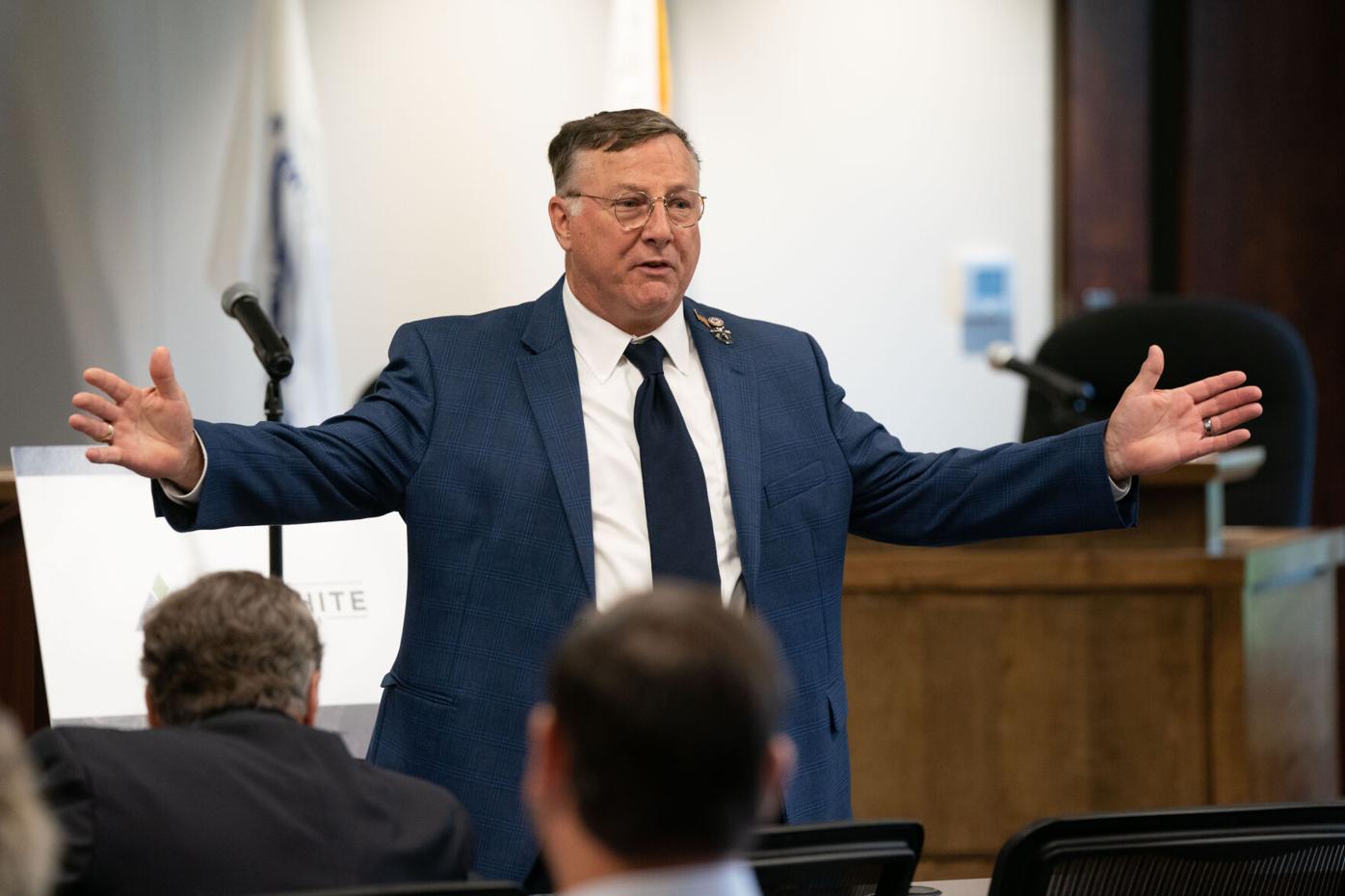 Representatives of Westwater Resources, Tallapoosa and Coosa counties and the EDA unveil the future site of Alabama Graphite.

Coosa County’s graphite has been waiting in reserve.

Now, three-quarters of a century after graphite was last mined in the area, the electric vehicle industry trajectory and the U.S.-China rivalry have coincided in Coosa County’s favor, making the mineral worth a whole lot more than just pencils.

“I think a lot of us had an increasing amount of faith that this was going to happen,” Lake Martin Area Economic Development Alliance chairman T.C. Coley said. “At some point when you have something special, you realize that it’s going to have to happen, especially given the geopolitical climate we’re in.”

What makes graphite mining viable for the first time since the 1940s, according to Westwater, is the rapidly growing demand for lithium-ion batteries found in laptops, mobile phones and electric vehicles, of which graphite is an essential component. As the nation switches to renewable energy, battery grid storage also offers a way to store spare electricity to tap into when the windmills aren’t turning.

“There’s a big expectation there’s going to be a huge shortage of battery materials, especially graphite, so we don’t see any problem with being able to sell the materials,” Westwater CFO Jeff Vigil said.

Westwater subsidiary Alabama Graphite Products intends to purify graphite suitable for three different types of batteries, including the batteries found in flashlights and gasoline-powered cars, but it’s the lithium-ion battery market that’s expected to see the most growth. Last year, California Governor Gavin Newsom mandated all vehicles sold in the state be electric by 2035. The U.K. has set goals for a similar mandate by 2030 and an all-out gas-powered vehicle ban by 2035.

The private sector is taking notice. Last month, Ford said it expects 40 percent of its global sales to be electric by the end of the decade under a new plan to invest another $30 billion in the industry. Earlier this year, General Motors pledged to go electric-vehicle-only by 2035.

If all of America’s vehicles were to go fully electric, market research firm Ademas Intelligence says, domestic graphite demand would increase 55 times over from the year 2020, more so than any other battery ingredient, including lithium, nickel and cobalt (despite the name lithium-ion graphite is the largest mineral component).

Even a fraction of a fully electric America will require boatloads of graphite.

“Think of it for the purposes of discussion – 15 million cars per year,” Westwater President and CEO Chris Jones said. “If 20 percent of those cars come out as electric vehicles over the near-term, that is five times more graphite than the world currently produces.”

Graphite is not rare, but there’s a difference between the amorphous graphite used as an industrial lubricant and the flake graphite required for batteries. Westwater has only one American competitor for battery-grade graphite – Graphite One, about 40 miles north of Nome, Alaska. Like Westwater, Graphite One’s mineral deposit is still in development. But, unlike Westwater, the Alaskan company has yet to give a timeline for constructing its battery-grade graphite processing plant.

“I don’t know a lot yet what their final process is going to be,” Jones said. “I think they have yet to do their feasibility study, which is an important step in developing their thinking around the business.”

Several Canadian and Australian companies are also getting close to battery-grade graphite production. But at present, China is Alabama Graphite’s primary competitor and is much less cost-burdened by labor, safety and environmental standards.

Still, in a worldwide natural resources market, Westwater insists it will remain price-competitive. The company is applying for a patent on its purification process and hopes to use that and its shipping advantage to manage costs. Patriotism may be an added benefit.

“I think the ‘buy American’ ethic being developed around battery materials right now serves us,” Jones said. “We don’t expect our customers to pay up for American products, but I think we can expect it to be a tie-breaker.”

Now that graphite has put the Lake Martin area in the spotlight, the economic development alliance is trying to leverage that. Before the Alabama Graphite Products plant was even a done deal, the LMAEDA already set its sights on companies up the battery supply chain.

“This will be an opportunity to get some attention for our other sites through the attention that’s going to be generated statewide, regionally, nationally about the project, and to try to put ourselves in the next generation of automobile conversation,” LMAEDA director Chad Odom said.

Coley expressed similar hopes, adding that as soon as the announcement was made, “we will be aggressively targeting related industries.”

The LMAEDA has already published an interactive map of available industrial parks on its website marking available electric, water supply, wastewater, natural gas and infrastructure. At Lake Martin Regional Industrial Park in Kellyton, the map marks the future location of Alabama Graphite Products beside 200-plus acres of available land.

It’s nowhere near enough space for Nevada’s Tesla Gigafactory. Still, it would provide plenty of room for another two million-square-foot Mercedes Benz battery plant like the one being constructed in Bibb County. As auto manufacturers continue to invest in new electric vehicle fleets, demand for lithium-ion batteries continues to rise, which could lead automakers to consider building more battery factories.

Those two factories are still a drop in the ocean of battery plants needed if the U.S. wants to keep up with China. If the LMAEDA had it their way, those plants would be located in Coosa or Tallapoosa counties.

“The longer you keep that graphite in the area, the more value it’s going to have for the area,” Odom said.

Alexander City mayor Woody Baird is on board.

“Bring it here,” he said. “Only thing you’re missing is your lithium,” though noting that lithium battery recycling is an adjacent industry he’s been researching.

“For our part, the graphite travels well. It can travel to a plant,” Jones said. “But if battery manufacturers want to locate closer to our facility, we’d certainly welcome and support that. From a marketing and sales perspective, it certainly relieves us and our customers of shipping costs.”

According to the U.S. Department of Energy, stationary grid storage and electric vehicles alone are expected to boost lithium-ion battery demand five to 10 times over by 2030. But as more industries transition to battery-powered energy, the possibilities are endless.

“Then there are conversations about electric-powered airplanes, things of that nature, so that’s another market that’s developing,” Coley said. “What’s going to be really interesting is that a lot of work is still under development that we’ll benefit from, having proximity to this critical mineral for battery development.”