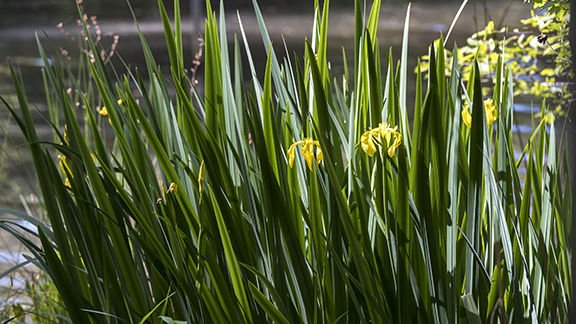 Yellow Flag will completely take over a shoreline. Photo by Kenneth Boone 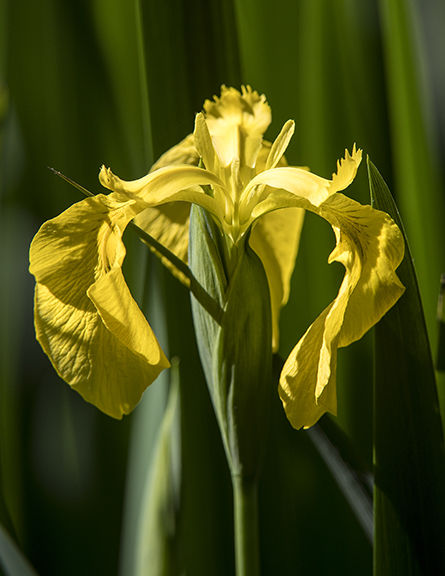 This bright and beautiful blossom

is really a monster in disguise. Photo by Kenneth Boone

Yellow Flag will completely take over a shoreline. Photo by Kenneth Boone

This bright and beautiful blossom

is really a monster in disguise. Photo by Kenneth Boone

If you see a yellow flag at the Talladega 500, it means take caution.

If you see a Yellow Flag on your shoreline, it should probably be taken as an even stronger warning.

Yellow Flag is the common name of the beautiful plant Iris pseudacorus. It’s so attractive that Leonardo Da Vinci included the flower in the lower left corner of one version of his masterwork, “Virgin of the Rocks.”

However, this femme fatale of a flower can be as troublesome as she is gorgeous.

Also known by the common names pale yellow iris and water flag, Yellow Flag is native to Northern Africa, the Mediterranean region and4 all European countries, other than Iceland.

Gardeners enamored with its large, showy, yellow blossoms have planted it all around the world. And this hardy, aggressive plant has escaped a number of those gardens and is now becoming a problem in many countries. This is a plant that forms dense colonies that can crowd out native plants and, in some cases, completely overtake the native shoreline vegetation.

It was originally brought to the Americas in the early 1900s. Yellow Flag was first identified in the wild in Newfoundland in 1911 and quickly spread. In 40 years, it had spread from Newfoundland to Minnesota. By 1957, it was reported in a California river where it “excluded all other plants,” according to the University of Florida’s Center for Aquatic and Invasive Plants website.

Yellow Flag is now found throughout all the United States and Canada, except for the areas around the Rocky Mountains.

When not in bloom, Yellow Flag’s sword-like leaves, which stand 3-4 feet tall, are sometimes confused with cattail leaves and native irises. When it’s blooming – in late spring around Lake Martin – you can’t confuse Yellow Flag with any other plant because it is the only yellow iris found in the United States.

One challenge to eradicating this invasive species is that these plants don’t usually flower until their third year, so by the time you spot Yellow Flag, its been there for a while.

These flowers, which can range from pale to bright yellow, form on erect stalks that are 3-4 feet tall, with several flowers on each stalk. Yellow Flag blossoms have a typical iris form, with three large, yellow, drooping sepals that may have purple or brown veins (on most flowers, these are the green structures at the base of the petals) and three smaller erect yellow petals.

This perennial grows in moist areas and along shorelines, pushing out into freshwater to about 10 inches deep, but it also has been known to populate salt marshes in Scotland. It can handle a wide range soil pH from 3.6 to 7.7, and despite its preference for moist feet, it is also drought tolerant.

Yellow Flag moves downstream in watersheds when its rhizomes (root-like structures) are broken off and carried by currents. Pieces of rhizomes can survive for up to 10 years in the wet soil and up to three months if dried. This plant also produces a long, three-sided seedpod containing an air pocket, which allows it to float. These pods can float for up to a year before washing up onto the soil, opening and starting a new colony.

The problem with a Yellow Flag colony is how densely it grows, compacting the soil and inhibiting native plants. These colonies trap sediment, causing wetlands to fill in and streams to narrow. Dense colonies can adversely affect populations of fish and waterfowl by reducing their habitat. All parts of Yellow Flag are toxic to livestock and most animals, and contact with the plant can cause irritation to some people’s skin.

In Alabama, it is perfectly legal to purchase and plant Yellow Flag iris; however, in many western and northeastern states, it is banned or listed as a noxious weed or invasive species.

To get rid of Yellow Flag, dig up the clumps, making sure to take out every piece of rhizome. Glyphosate herbicides designed for use in aquatic environments can work effectively, especially if applied to the open wound of a plant that has been cut.

According to Wes Anderson with Alabama Power Company Environmental Affairs, it is illegal for anyone to treat vegetation in public waters without being certified and permitted by the State Department of Agriculture and Industries.

Anderson said it is fine for owners to treat Yellow Flag on their private property, but if the plant has grown into the water, call 1-800-LAKES11 to report the problem, and Alabama Power will provide assistance.

Tallapoosa County Extension Coordinator Shane Harris said he has not heard many problems about Yellow Flag in Tallapoosa County, but he cautioned that if anybody does want to use aquatic herbicide on their private property, they should strictly match the herbicide with the pest plant and follow the directions on the herbicide container to the letter.

Nancy Loewenstein, an extension specialist with Alabama Extension, said Yellow Flag is an invasive species that she sees every now and then, on the edges of ponds.

“In fact, I saw some on the way to lunch today, in a swampy area in the forest understory,” she said. “It’s one of those things that you hardly notice unless it’s blooming.

“It’s just a local problem in some areas at this point. I would definitely keep an eye on it, and if it was spreading, do something about it.”

Information for this article came from the University of Florida’s Center for Aquatic and Invasive Plants and the New York Invasive Species Information website.