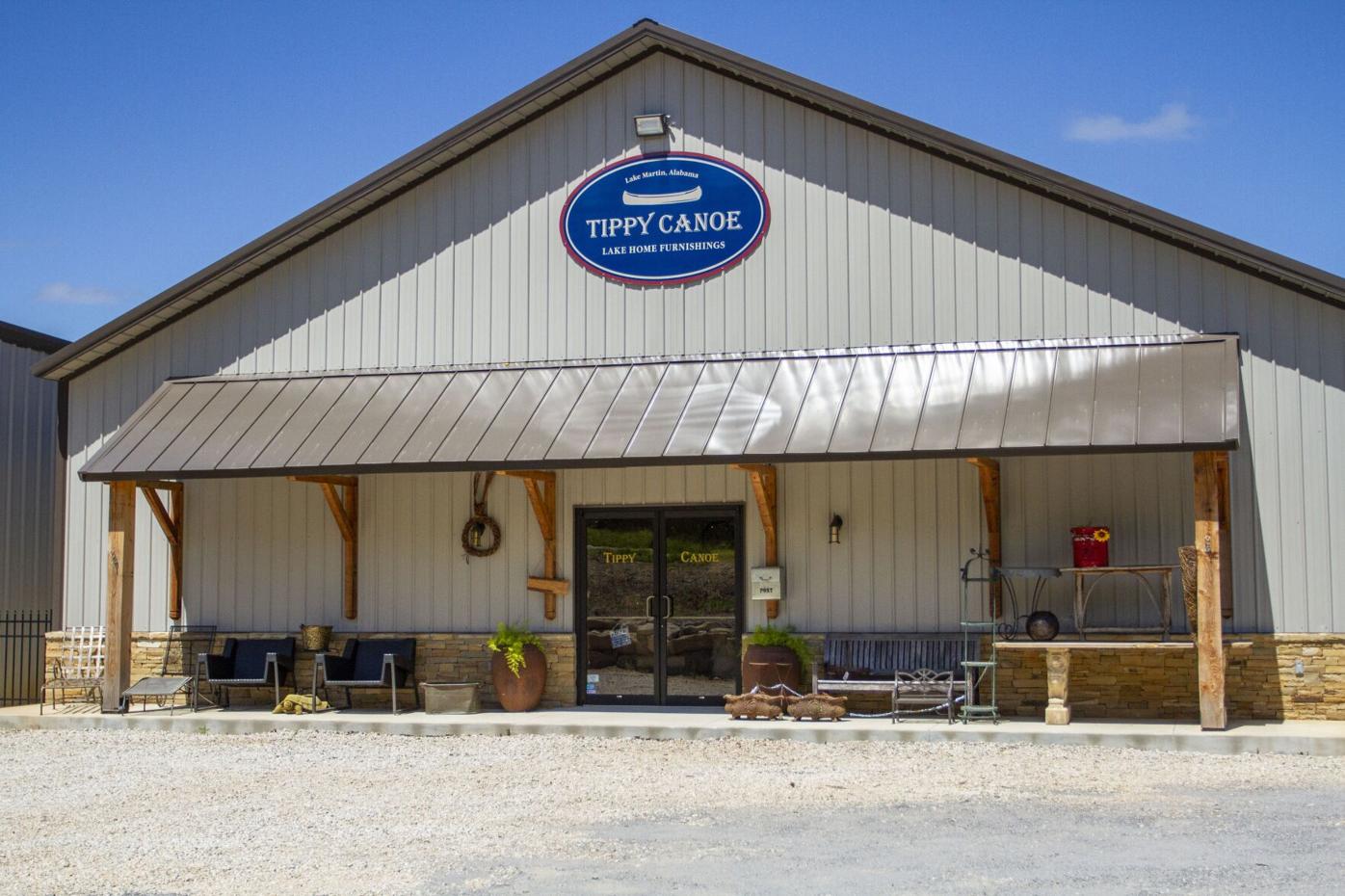 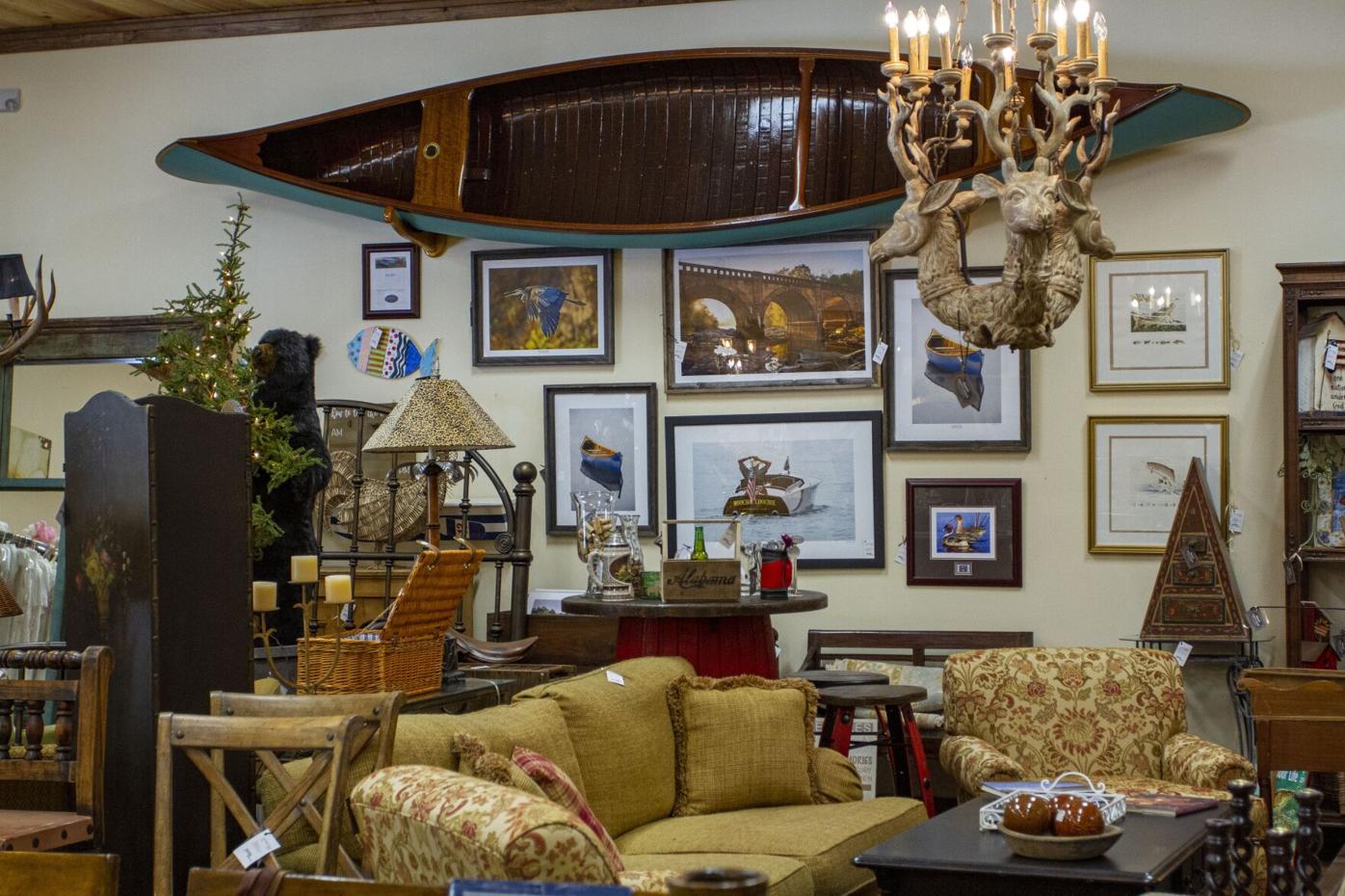 A Steve Ambrose canoe hangs on a wall of the store 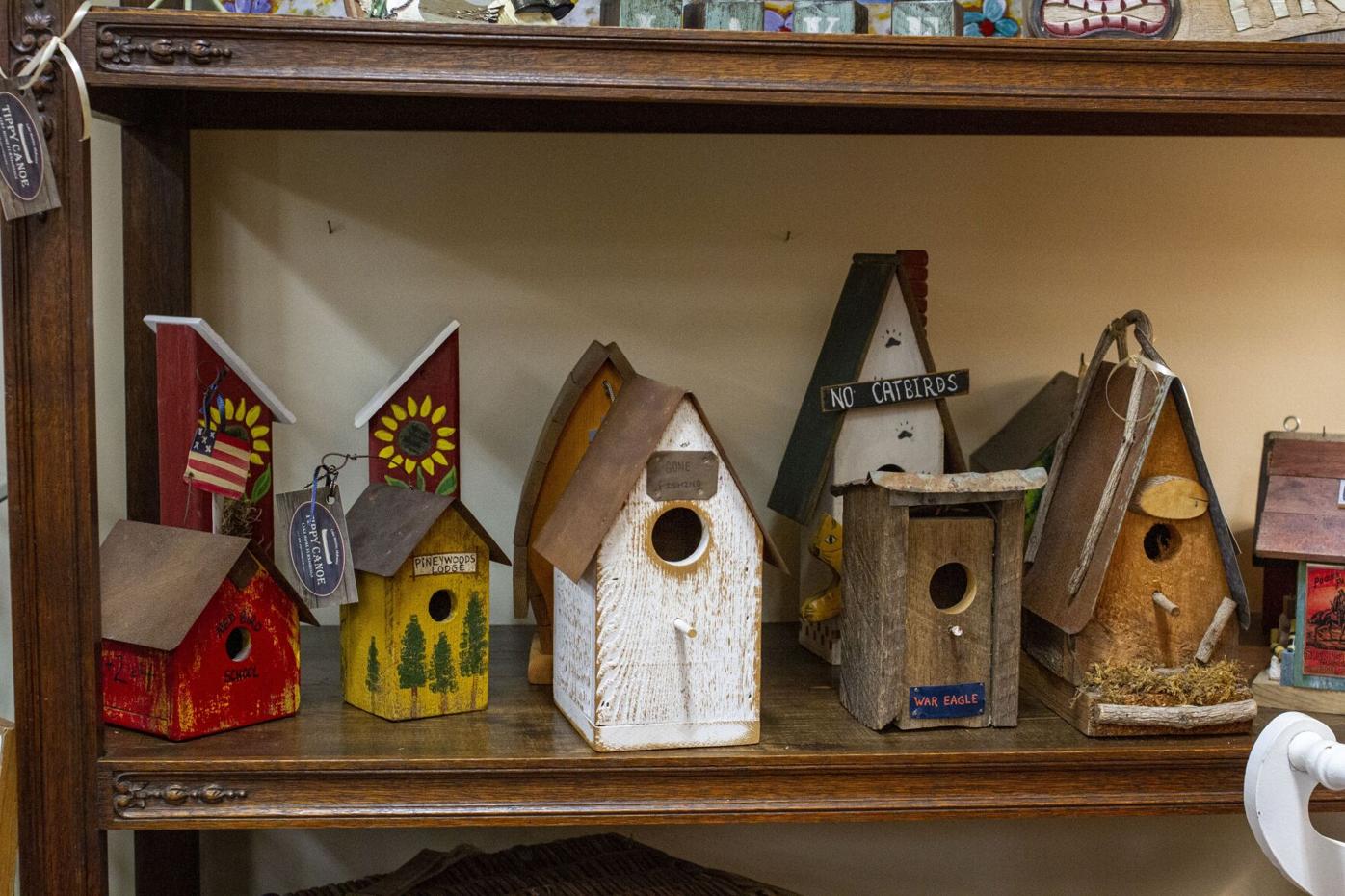 Handmade lake décor fills every corner of the shop 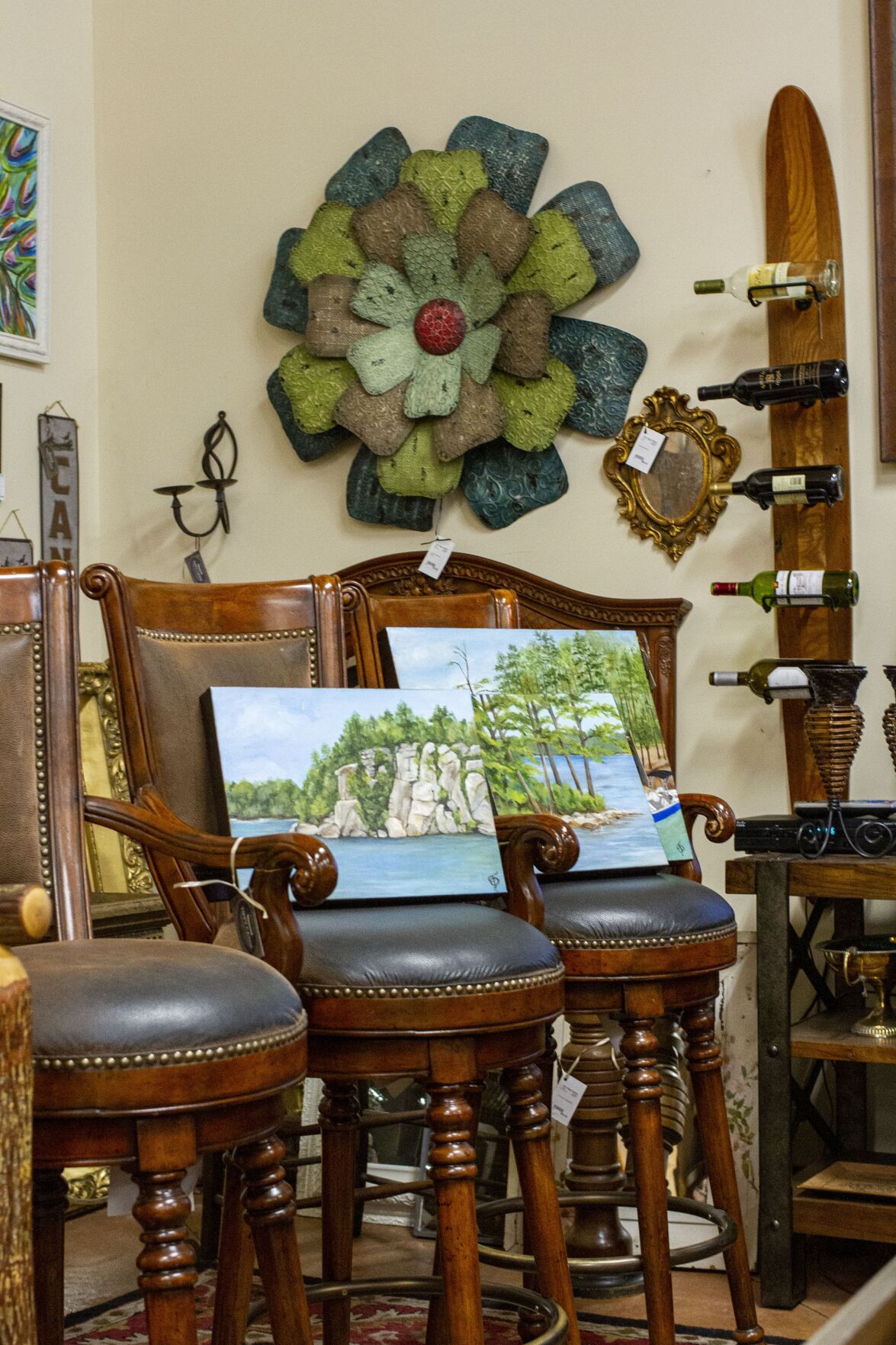 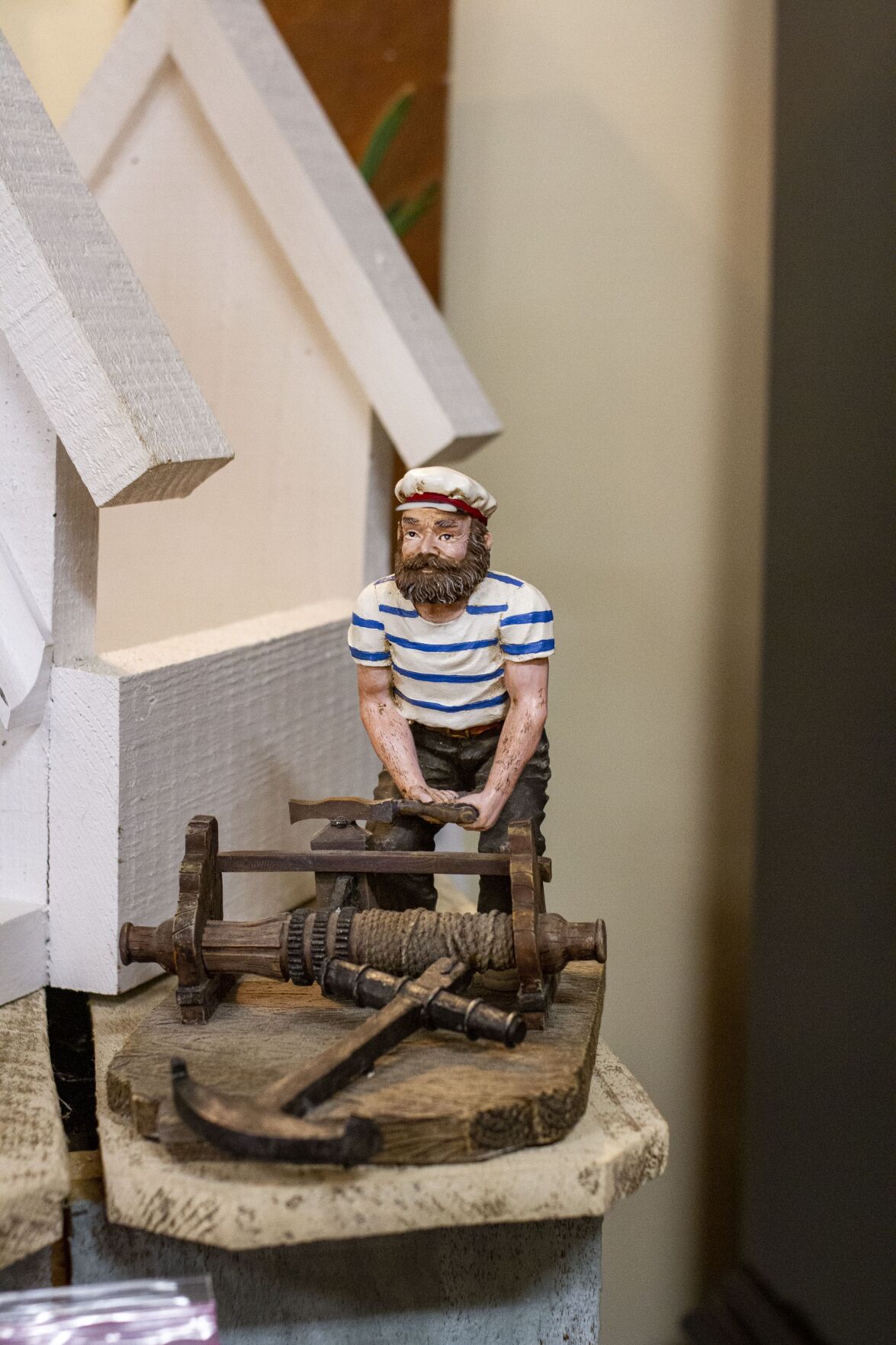 Rush keeps a selection of lake-themed pieces in stock

A Steve Ambrose canoe hangs on a wall of the store

Handmade lake décor fills every corner of the shop

Rush keeps a selection of lake-themed pieces in stock

A treasure trove recently reopened on the route to Lake Martin just south of Alexander City, offering a wide variety of eclectic and unique finds. The Tippy Canoe, owned and curated by Realtor Mimi Rush captivates and entices with its charmingly mismatched array of antique cabinets and rustic tables. The promise of a perfect find fuels an exploration of the farthest reaches and corners of this jewel.

Rush opened the doors of her business in October and remained quite busy until COVID-19 forced a temporary closure. Despite the difficulties and frustrations brought on by COVID-19, she was able to take a much-needed break and spend time with family, something she said she wouldn’t trade for the world.

Her furniture and décor boutique is open again in an ideal location on state Route 63, where a steady flow of traffic brings in both local and tourist interest. The store is Rush’s lifelong dream come true. Antiquing and hunting for hidden treasure is a love she has had since a young age, a flame kindled by her 88-year-old mother, who is still very involved in the comings and goings of The Tippy Canoe.

The Tippy Canoe features a variety of imports, as well as pieces from local artists. Canoes built and restored by Steve Ambrose exhibit a rare and rustic elegance that Rush has long admired. Beautiful landscapes by Tina Douglass and Lake Martin photographs by John Denney grace the walls. She also stocks furniture by local chiropractor Doug Roberts.

Every piece of furniture is a treasure and holds some unique value and charm, Rush said, but some pieces stand apart. On her list of favorites is an imported 19th century hand-carved French Hunt cabinet with the original glass.

The Tippy Canoe offers a diverse repertoire of styles, from rustic to upscale. In addition to featuring local artists, the Tippy Canoe supplies a plethora of high-end retail brands. These include Frontgate, EJ Victor, Ralph Lauren, Summer Classics, Brown Jordan and more.

“It’s a great place to find some pieces with character and quality for a fraction of the retail price,” Rush explained.

She hopes that someday her store could be a gathering spot with a happy vibe for the people in the community.

“It’s a place to find something special and to connect with people,” she said.

Already, she and her family have made many connections, personally and professionally, in the community through the business.

With her business quickly growing and becoming more popular, Rush hopes to double her storage space soon. Merchandise is always circulating, and new pieces are always coming in. Her plan for the future includes not only obtaining more space for storage, but also learning to better showcase and organize her pieces to display how they could fit into a home. She would also like to add an outdoor section.

Rush was born and raised in Montgomery, Alabama, as was her husband, Ken. They came to the Lake Martin region when they were expecting the birth of their son, Winston.

While Rush was leading the National Kidney Foundation of Alabama as executive director in 2005, she moved to Lake Martin and began the search for a career around the Lake Martin area, hoping for a stint in some capacity with Russell Lands On Lake Martin. She has been selling waterfront properties as a fulltime Realtor for Russell Lands’ Lake Martin Realty ever since.

Rush has worn many hats in her life. From running a nonprofit organization to director of alumni affairs at Huntingdon College and now, maintaining two careers that keep her busy.

The business, though Rush’s dream, has been a family endeavor. Rush is thankful for all of the love and encouragement she has had. With trying to juggle her work and family, she has come to rely more heavily on her husband.

“Ken cooks, cleans, manages his own career and does so much to support our family at home.” she said.

Ken also has been involved in every start-up decision for Tippy Canoe, including the name, logos, site building and everything in between. Rush’s 14-year-old son also has been very involved in his mother’s hobby-turned-enterprise. She keeps him busy moving furniture and doing odd jobs.

“I make him earn his allowance,” she chuckled.

While appreciating the opportunity for him to learn important skills, including a strong work ethic and good customer service, she also values the extra time she has had with her son.

The Tippy Canoe is a lovely spot to explore, and Rush is a welcoming hostess who looks forward to the opportunity to meet new people. Stop by the store at 6068 state Route 63 South, Suite 5, in Alexander City Thursday through Sunday from 10 a.m. to 5 p.m. Call Rush at 256-392-4802 or message her at m.me/TippyCanoeLakeMartin for an appointment.