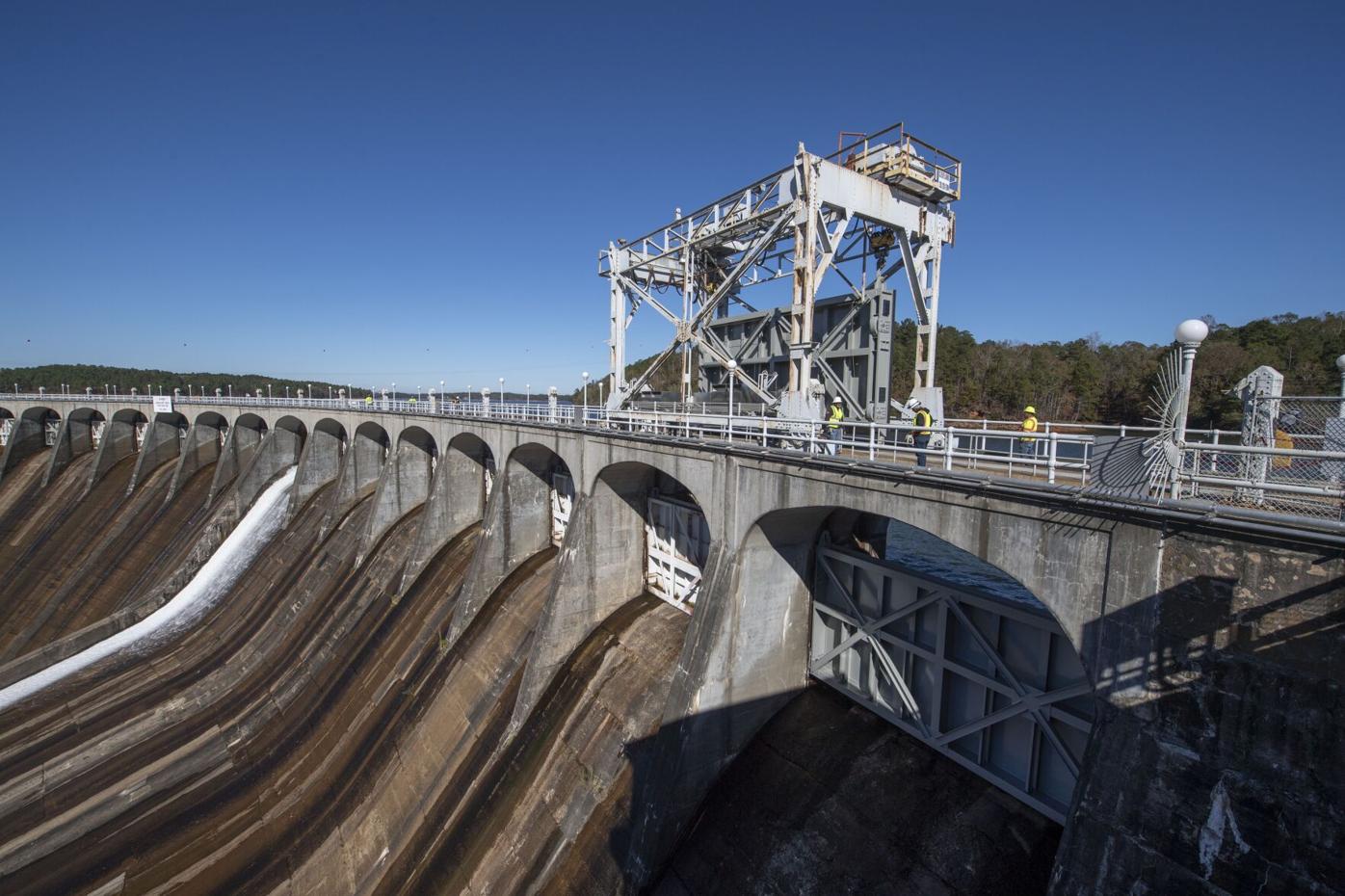 The 94-year-old spillgates at Martin Dam are being replaced with new, lighter gates, but Alabama Power has retained the vintage look of the original gates 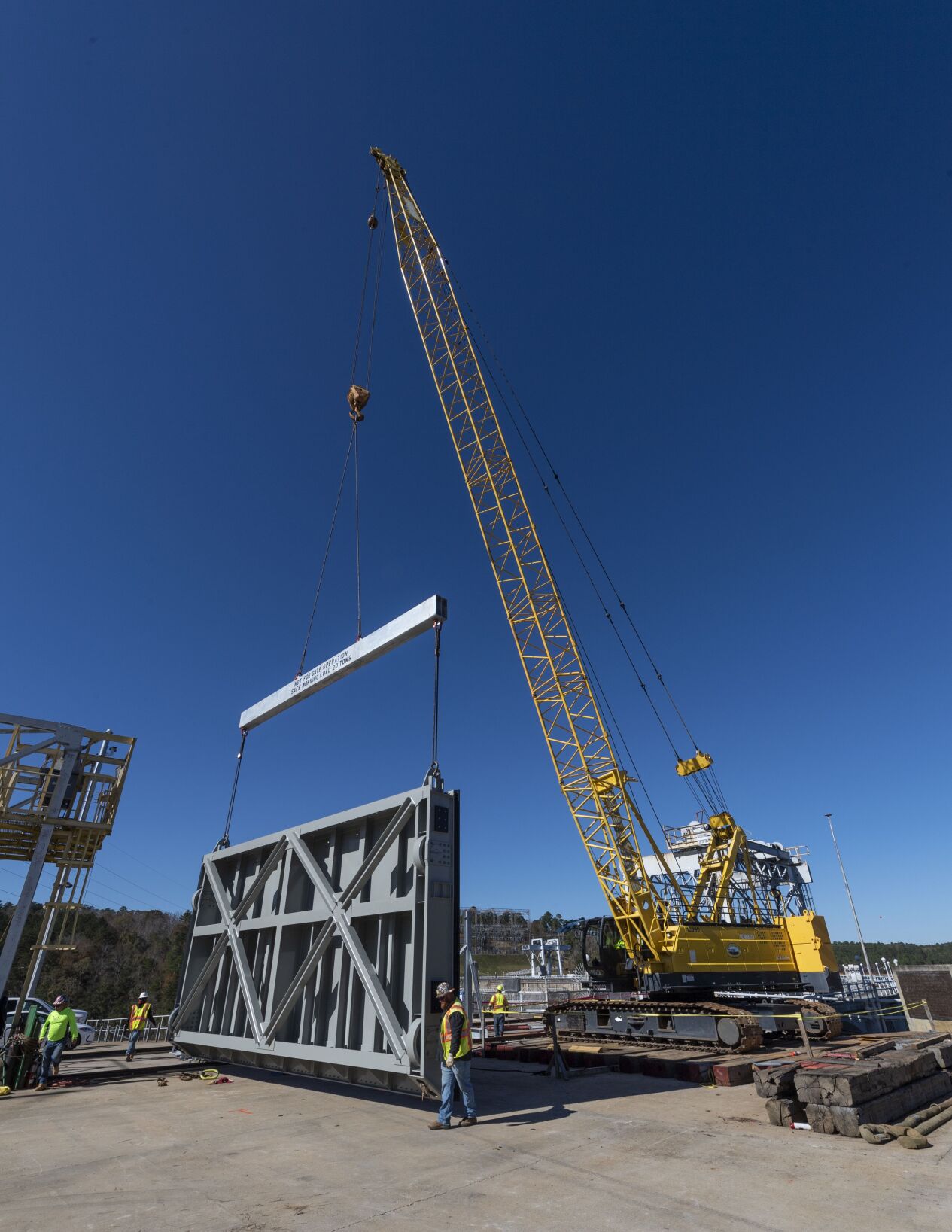 A crane lifts the spillgate for installation 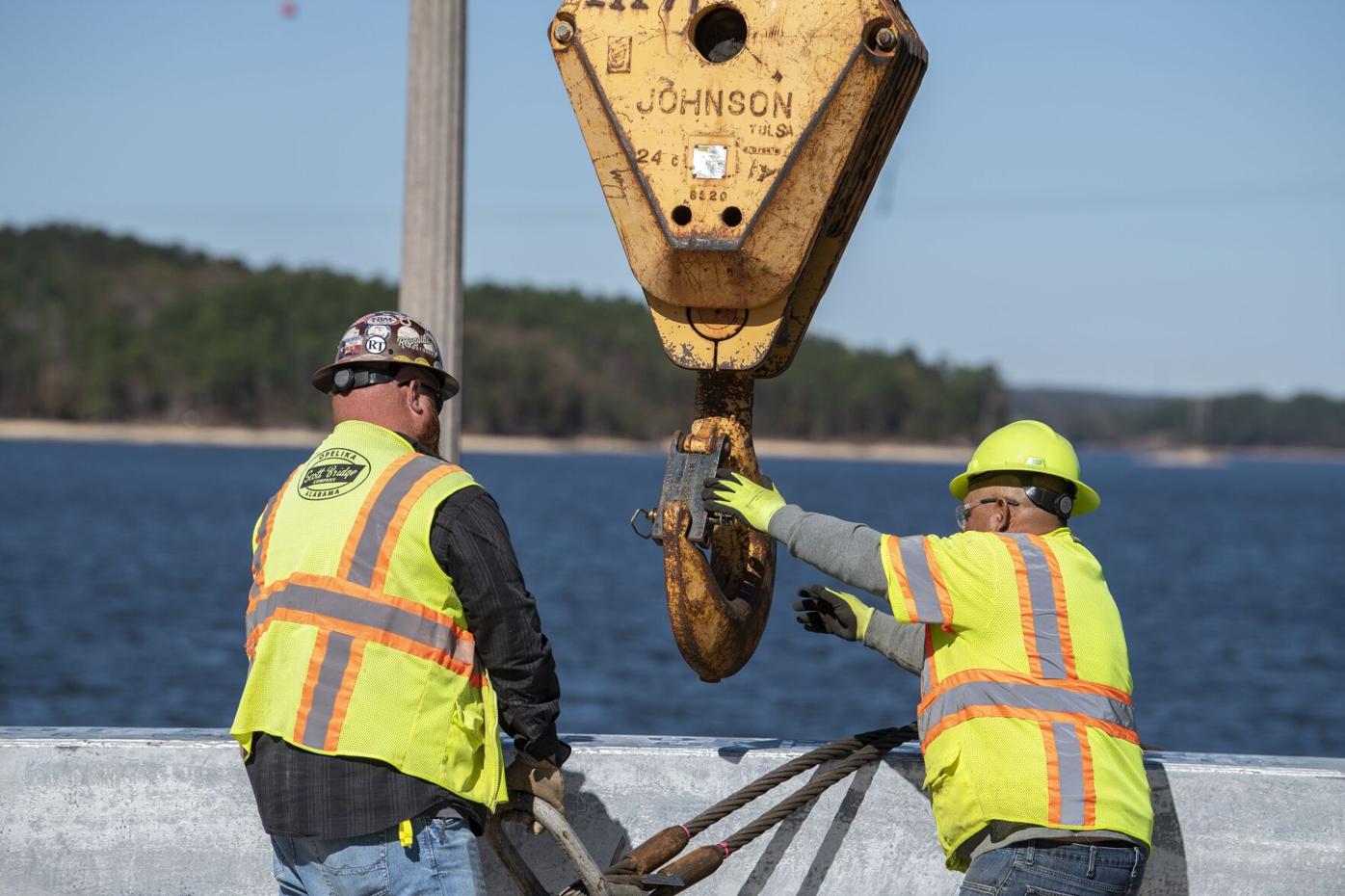 Cranes are used to hoist the spillgate into position 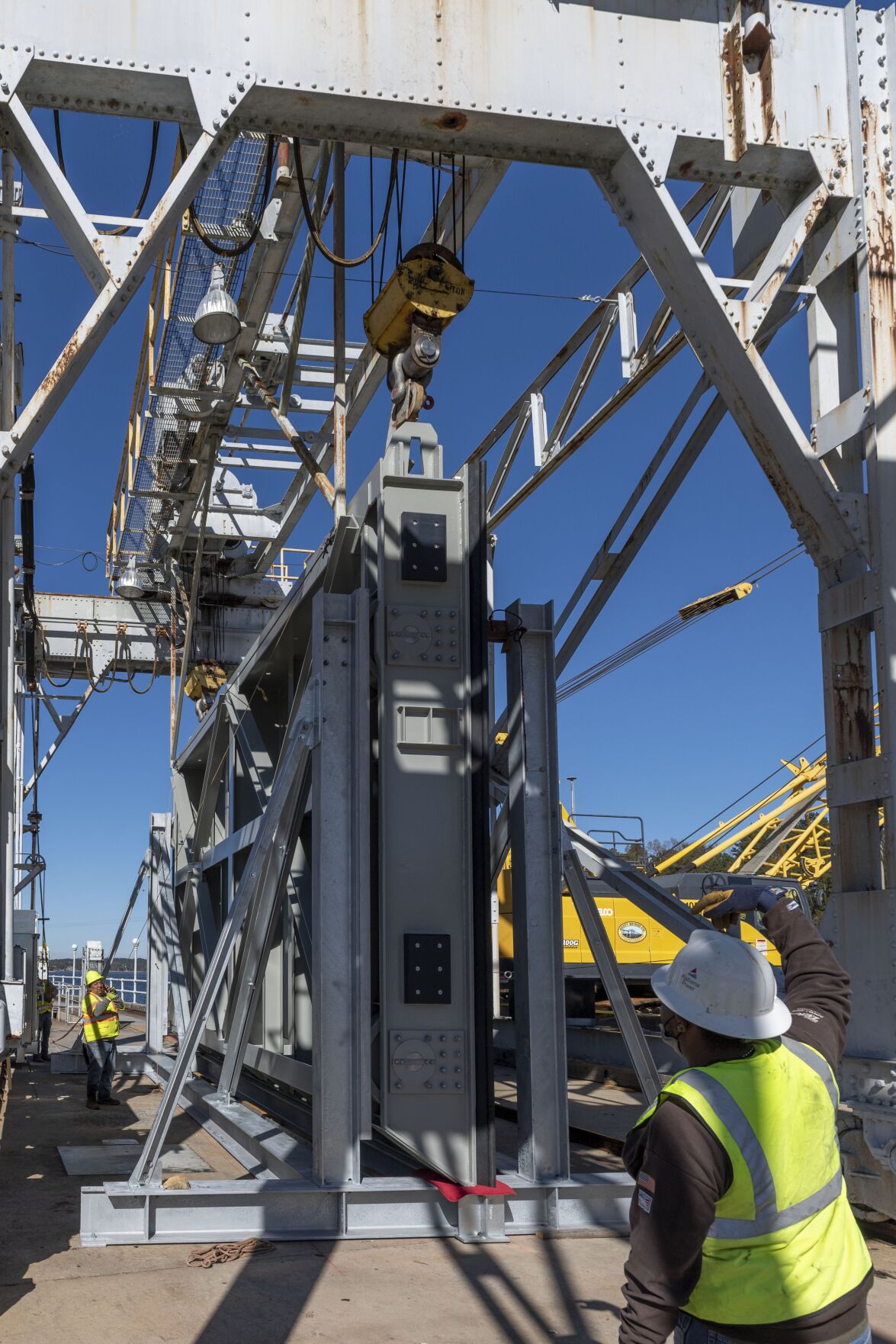 The new spillway gates are 3,000 pounds lighter than the original 40-ton gates 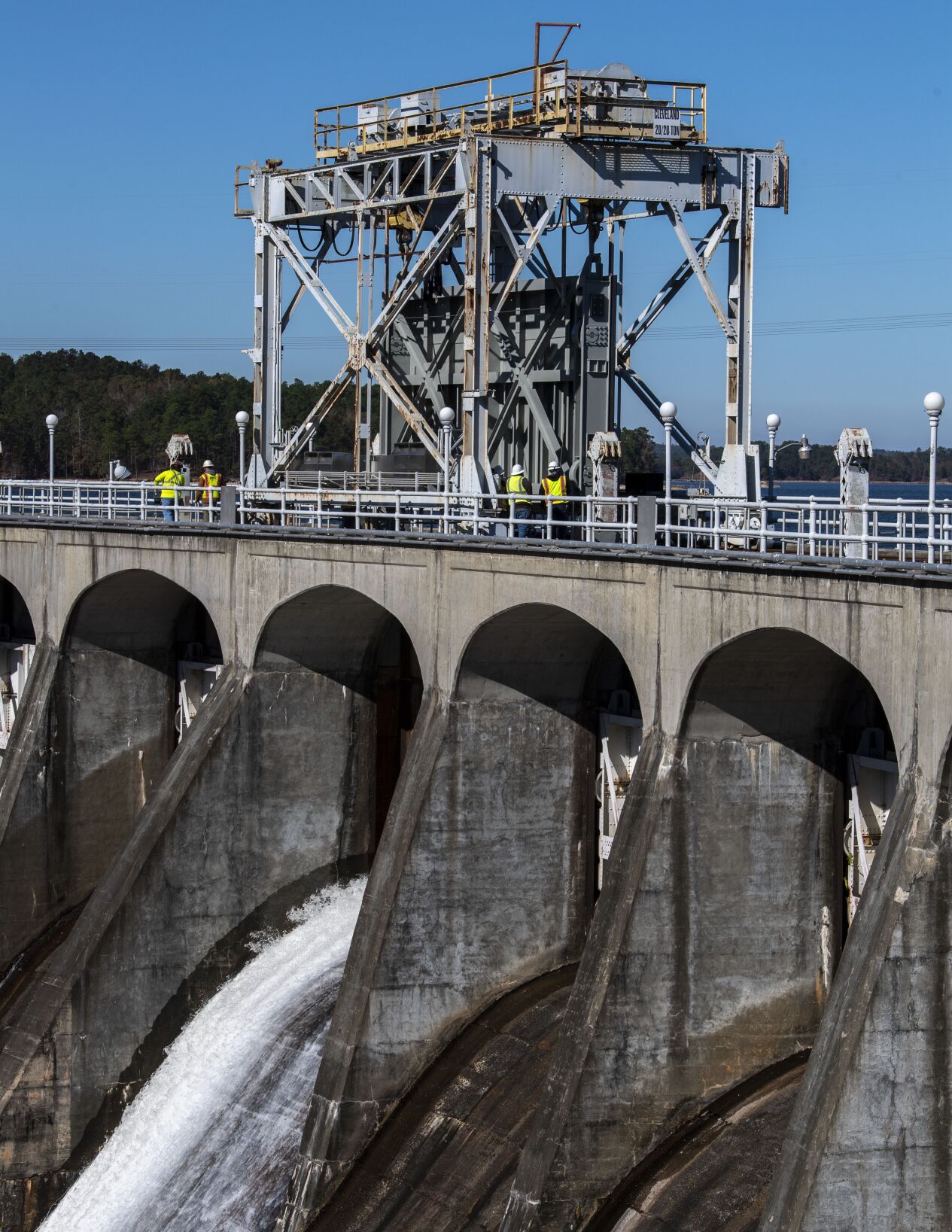 As the new gate is lowered, it holds back the river, maintaining the water level on Lake Martin 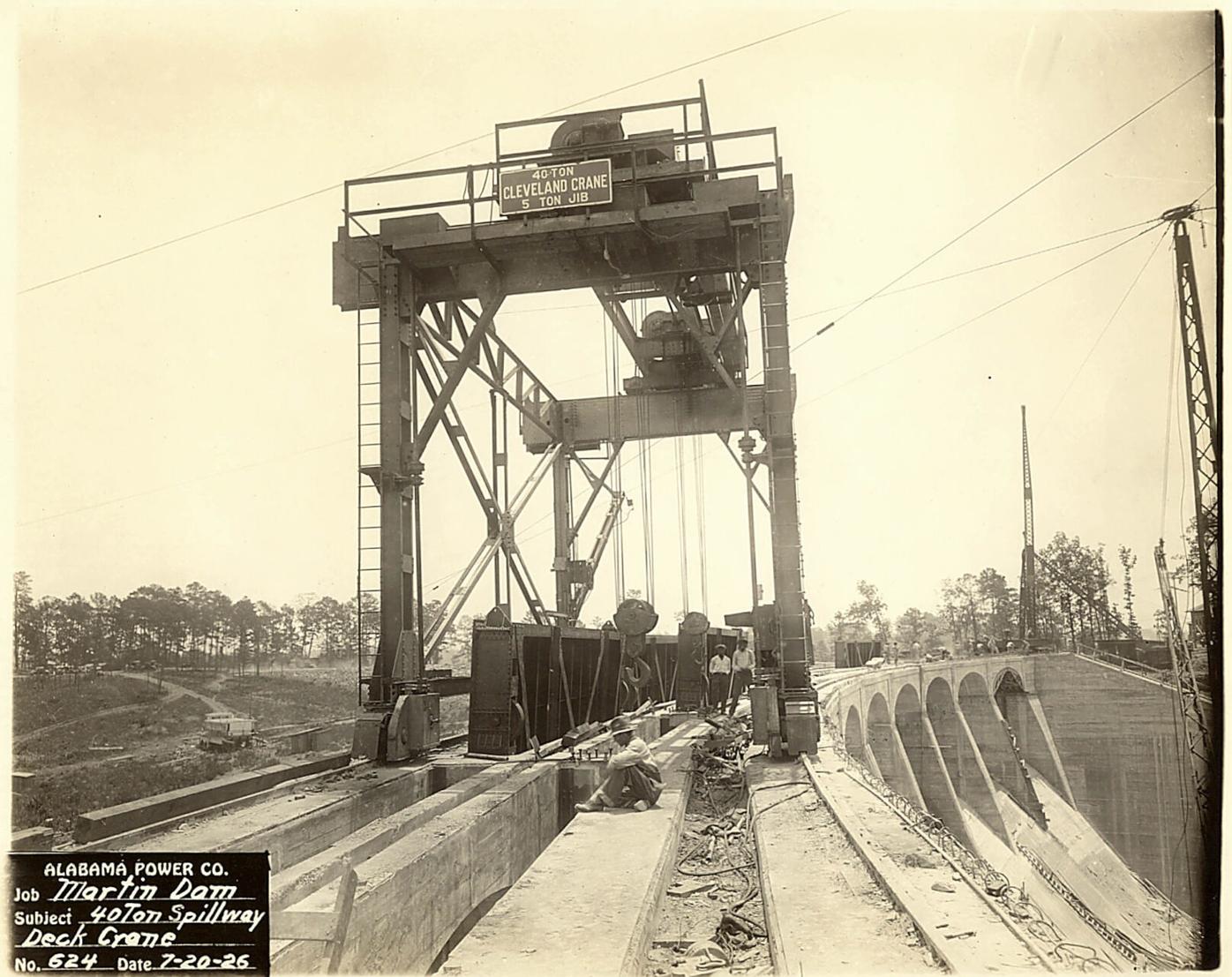 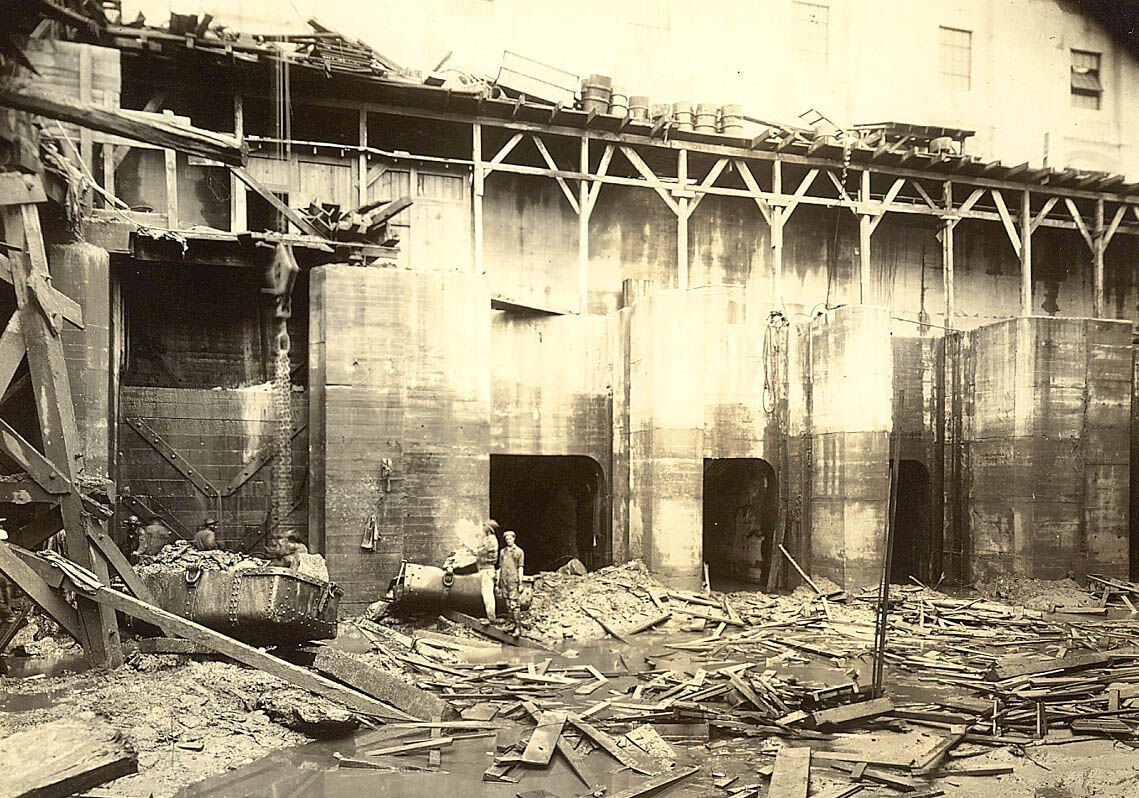 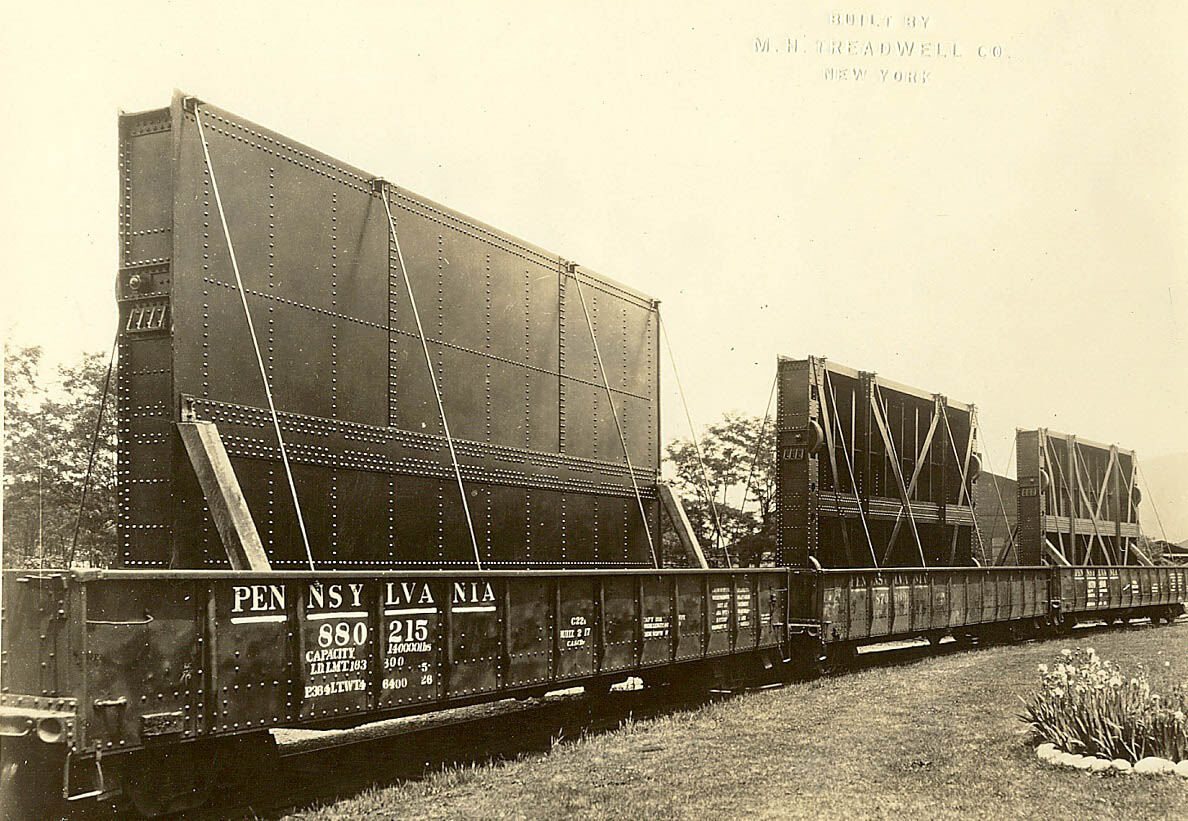 The 94-year-old spillgates at Martin Dam are being replaced with new, lighter gates, but Alabama Power has retained the vintage look of the original gates

A crane lifts the spillgate for installation

Cranes are used to hoist the spillgate into position

The new spillway gates are 3,000 pounds lighter than the original 40-ton gates

As the new gate is lowered, it holds back the river, maintaining the water level on Lake Martin

For nearly a century, the spillgates atop Martin Dam have helped Alabama Power manage the company’s original source of renewable energy: flowing water.

But the decades and the elements have taken a toll on the 20 steel gates that have been operating at the dam since its completion in 1926. The dam created Lake Martin – at the time the largest manmade reservoir in the world.

The spillgate replacement process began last month as the new gates arrived from a fabrication site in Mississippi.

“The replacement process will be different from those early days,” said Chris Goodman, Tallapoosa River manager for Alabama Power. “But the technology of the new gates – it really hasn’t changed much from the old ones.”

The original gates arrived by train, on a rail line built to serve the remote dam construction site at Cherokee Bluffs. That railroad no longer exists, and its bed has been converted to accommodate hikers at the Forever Wild site below the dam.

Those gates – each one 32 feet wide, 16 feet tall and weighing 40 tons – had to be hoisted by crane from rail cars at the bottom of the newly built dam to the top of the structure.

The new gates – essentially the same size but about 3,000 pounds lighter – will roll in on flatbed trucks straight to the top of the dam.

The old gates, fabricated in New York, were riveted together – the cutting-edge method of the day. The new gates are welded but incorporate elements to mirror the historic look of the originals. The company worked with the Alabama Historical Commission to keep the vintage look.

In addition to being lighter, the new gates sport some modest design changes, which Goodman said would provide a tighter seal while making them easier to open and close when water is flowing through the spillgate openings.

Spillgates typically operate only after heavy rains or storms, when there’s a need to manage higher water flows on the river. Under normal conditions, the spillgates stay shut, with water moving downstream through the dam’s four turbines.

“We’d much rather move water through the turbines and produce clean, renewable hydropower,” Goodman said.

What won’t change is how the gates operate. When a spillgate needs to be opened, a crane on the top of the dam is used to lift it into position. When it is no longer needed to manage water flow, a crane operator slides the gate down into the closed position. How many gates are opened or closed depends on what’s needed to properly manage the flow.

The replacement process is expected to take about five weeks, with one gate being replaced each day, four days a week, and one day a week reserved for possible adverse weather. As one new gate comes in, an old gate goes out and is sent to a metal recycler, Goodman said.

The process will be significantly different from the one recently used downstream at Thurlow Dam, where its 36 historic spillgates were replaced and the crest of the structure modified. Thurlow’s new gates were installed with a crane mounted on a barge, as construction took place while the lake was lowered during the summers of 2018 and 2019. Oscar Thurlow, chief engineer of Alabama Power during the company’s early days, designed the original spillgates at Martin Dam, which is named after one of the company’s founders, Tom Martin.

Goodman said, based on the lifespan of the old gates, there’s no reason why the new spillgates won’t last a century. Spillgate replacement is one of the more dramatic operations that takes place infrequently at Alabama Power dams to keep the hydro systems operating safely and efficiently.

Nearly 20 years ago, three of Martin Dam’s turbines, original to the 1926 project, were replaced with more efficient models. A fourth turbine, added to the dam in the 1950s, is scheduled to be upgraded in 2022. The new turbines allow more renewable energy to be produced from the same amount of water – a benefit to customers, since hydro is one of the most cost-effective ways to generate electricity.

“It’s all about our mission: to provide our customers with clean, reliable, affordable power,” Goodman said.

Visit apcshorelines.com and click “Our Lakes & Dams” for more information about Alabama’s hydroelectric dams and the clean, safe, reliable renewable energy they produce.