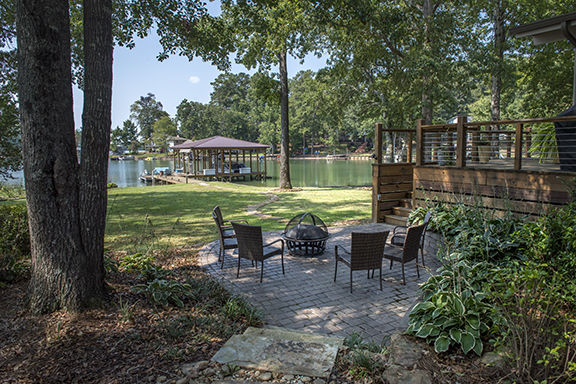 The fire pit is ready for cool nights at the lake. 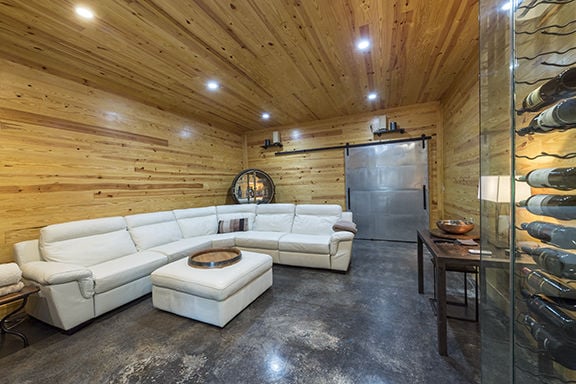 Mike designed the glass cabinet in the entertainment space addition. 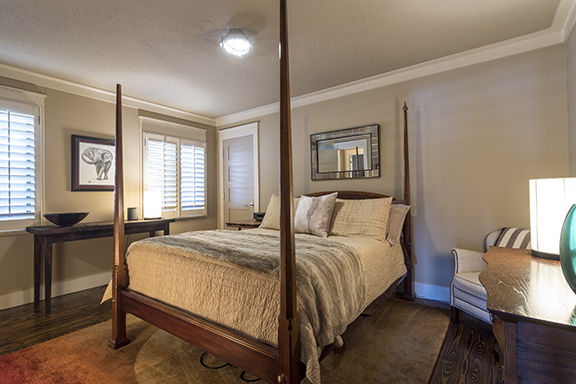 A fourposter bed purchased years ago brings a bit of nostalgia to the guest room. 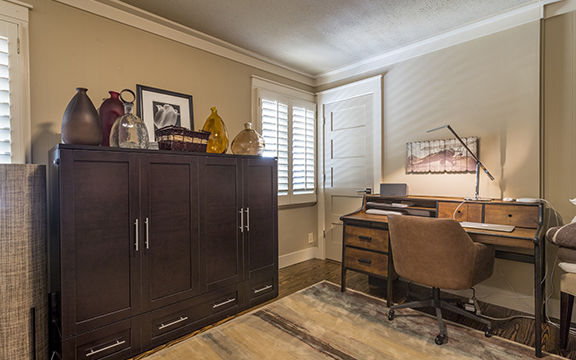 A cabinet-style Murphy bed opens to transform the study to an additional guest room. 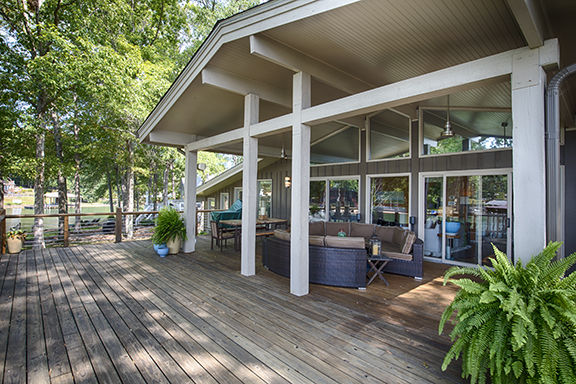 The covered deck was expanded during the renovation. 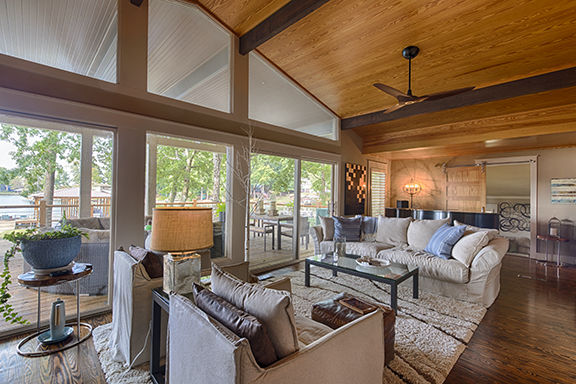 A series of windows showcases the lake view in a renovation that preserves the home's cabin feel.

The fire pit is ready for cool nights at the lake.

Mike designed the glass cabinet in the entertainment space addition.

A fourposter bed purchased years ago brings a bit of nostalgia to the guest room.

A cabinet-style Murphy bed opens to transform the study to an additional guest room.

The covered deck was expanded during the renovation.

A series of windows showcases the lake view in a renovation that preserves the home's cabin feel.

Mike and Carole King, a Louisiana guy and a Georgia gal, met in Alabama. They purchased a 2,400-square-foot cabin in StillWaters on Lake Martin in 2010, and over the last nine years, they have updated the home in every area, adding 1,100 square feet of living space.

“The cabin looked absolutely terrible when we bought it. It was about 38 years old – originally cinder block – and we are told it was the first or second home in StillWaters,” Carole King said.

Mike is a retired Blue Cross and Blue Shield executive, and Carole is a dermatologist who practices part-time in Auburn, so they had time to oversee the major renovations.

The couple began the remodel quickly, hiring builder Wes Waters to transform the main living area. The pine floors were in great condition but needed refinishing and stain. The couple added a pine ceiling and walls, both with a clear coat of polyurethane to bring out the natural color and wood grain. The room is furnished in neutral, soft colors – upholstered chairs around a square dining table and a comfortable, Restoration Hardware sofa and two chairs covered in linen from Richard Tubb Interiors in Birmingham for the living area.

The Kings added a limestone fireplace with gas logs and updated an existing bar area with a granite countertop and a glass cabinet with shelves. Combining a modern look with nature, nesting tables with cypress tops and iron legs were used in several locations in the home. King’s black 1912 Steinway baby grand piano completes the room.

A beautiful A-frame window with sliding doors across the back of the home offers a view of the covered deck, which was enlarged to 30 feet by 48 feet during the renovation, along with a backyard filled with tremendous oak trees. The shade trees create a lovely space between the deck and the lake. The Kings built a new boathouse just two years ago, and Mike laid a flagstone path from the deck to the dock.

Two crescent-shaped sectional sofas on the deck provide a comfy and stylish conversation area, while a table and chairs from VivaTerra offer outdoor dining space. King enjoys her coffee in the morning and wine at night on the deck. Both a Big Green Egg and a Weber gas grill are available for outdoor cooking fun.

“When I told Mike I was ready to take a sledgehammer to the sink, our second project started – that was the kitchen. I had a specific design and modern look in mind, so I decided to hire the subcontractors myself and oversee that project,” King said.

She gutted the existing kitchen space, except for the cabinet bases. For the contemporary look she envisioned, King went to Waverly Stoneworks to select 12-inch by 12-inch black granite floor tiles, Absolute Black granite for the countertops and a complementary polished Titanium granite slab for the island. Glossy black subway tiles were selected for the backsplash. A six-burner Thermador range with a Miele stainless steel hood invites cooks to the kitchen.

“We love to gourmet cook together, so the new kitchen makes that a lot easier, a lot more fun,” King said.

Cabinetry is painted a creamy white. The lighting in the kitchen includes can lights and a swirled infinity circle LED chandelier over the island, adding yet another modern touch. The Kings replaced all the cabinet doors in the kitchen and added drawers to the island for extra storage. A butler’s pantry increases storage and preparation space.

Before the Kings bought the house, two wings had been added on each side of the existing block cabin. Both contain sunken rooms with steps from the main level. The wings are entered through barn doors hung on galvanized hardware, lending the space a contemporary look and feel.

One of the wings serves as Mike’s study. In addition to a desk, equipment from his photography hobby and his love of the guitar are part of the décor. The second wing features an entertainment room with television and cozy furniture.

Just off the main room, a hallway leads to a space that Waters reconfigured from just two bedrooms and one bath to three bedrooms and three baths. Two of the guestrooms are joined by a Jack-and-Jill bath while the remaining room serves double duty as guestroom and King’s study.

“We added a cabinet-style Murphy bed to the study, and it is very comfortable. In the other guest room, I have my bed that was purchased from Pizitz in Birmingham in 1987. Even the mattress says Pizitz, and it is still the best mattress in the house,” King said.

King requested a separate bathroom for herself and a bathroom for Mike, so the hall bath is his unless needed for guests. His oversized granite enclosed tub includes a spectacular rain showerhead with several additional showerheads. White subway tiles on the wall contrast with blue-gray granite around the sink and tub.

“He is great to let me just enjoy that master bath all for myself. I chose all the light fixtures and mirrors – very modern. And I knew I wanted glass blocks for the shower wall and no door. I also like that doors open to a small porch outside where I would like to have a Zen garden with a water feature,” King said.

The master bedroom includes plenty of space for a dresser and a king size bed with an upholstered headboard from Richard Tubb with luxurious linens from Crate and Barrel. The television is cleverly situated on a heavy wooden easel.

Outside the main house, the Kings closed in a three-car carport to add three distinct areas – a workshop, an exercise room and an extra bedroom. The bedroom, a favorite for the grandchildren, offers them the choice of a daybed downstairs or two twin beds accessed via a sliding ladder to a loft area.

Mike’s favorite addition is the man cave, which was initially planned for storage. Based on Waters’ suggestion, the Kings now have storage behind a sheet-metal-over-plywood barn door and a comfortable space for entertaining.

A stained, polished concrete floor creates a clean, modern look, while the pine walls and ceiling are replicated from the main house. A large, creamy white sectional sofa allows seating for a crowd to view the 85-inch television. The Kings enjoy wine, but Mike had never been happy with freestanding wine refrigerators. Instead, he designed a floor-to-ceiling glass cabinet that holds 438 bottles on racks. Light colored brick accents the back wall, and a cooling system in the attic keeps the wine at the perfect temperature.

The Kings’ man cave added the perfect space for hosting friends and family. A popcorn machine, beer fridge and Icee maker took the fun to a whole new level.

The Kings said they travel often – in fact, King earned her private pilot’s license in 2010 – but their time is split about 50/50 between Birmingham and Lake Martin. Although they said that their cabin is always a work in progress, from the indoor man cave to the outdoor living space on the expansive covered deck, the Kings have combined a vacation getaway with the comforts of home for a spectacular Lake Martin renovation.