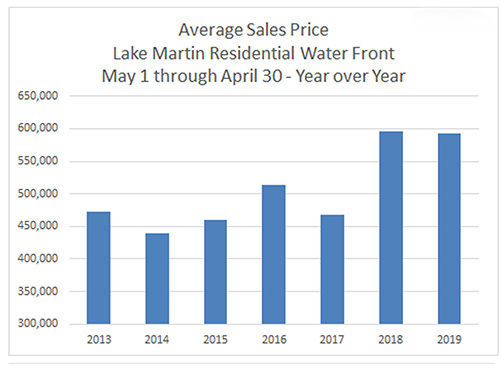 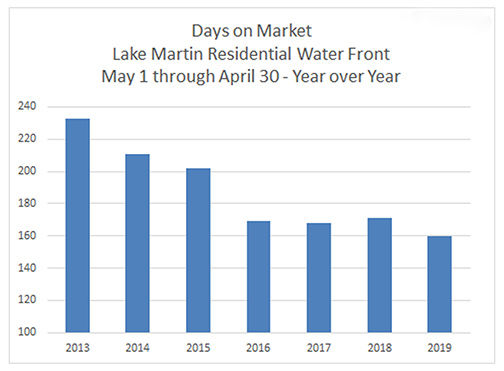 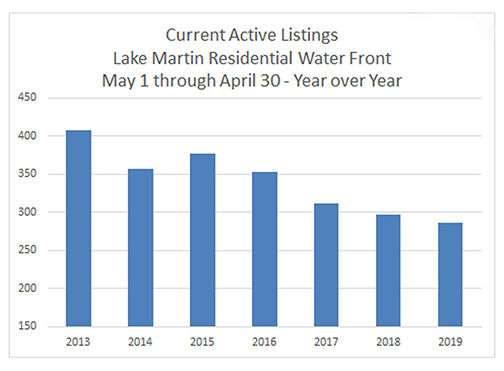 A friend and one of our Realtors here at Lake Martin Realty, Ed Dickinson, passed away in 2012. Ed was a great guy, and I miss him because he loved his family and his friends – and life in general. He was always upbeat and was there for his family, friends and co-workers. Since Ed was so positive, I remember lots of things that he said.

Ed loved the lake. He frequently said, “Buy Lake Martin – it is an investment your whole family can enjoy. You can’t take the grandkids tubing in your IBM stock!”

I am happy to say that my friend Ed was right. Lake Martin is not just a fun investment; it is a great investment.

Until 2009, I had not heard the term “under water” tied to residential real estate, at least not very often. Then, I heard it with some frequency, almost daily in 2010-2013. What the term means, of course, is how much below purchase price the current property value is.

Lake Martin, like the rest of the country, experienced decreases in residential property values due to the financial crisis. That crisis caused a rush to the exits by people thinking that they needed to sell at any price. Smart purchasers were happy to take advantage and picked up properties at bargain prices.

Since there was little new construction or development, it was just a matter of time before inventory levels would decrease and the economy would recover. When those two events became a reality, prices would recover. My analysis is that prices did recover and in a big way.

A Look at the Numbers

If people had known that prices were going to increase this far and fast, we would have had more transactions in 2013. The lower sales volume in 2013 was not due to lack of inventory – there was plenty available. It was due to the economic recession. Sales volume, after the recovery, increased dramatically, almost doubling from 2013 to 2018. Pent-up demand was finally satisfied by 2018 and returned to a normal pace.

Prediction for 2019 – Steady as She Goes

After a significant increase in average and median prices, one wonders what is likely to happen this year. It is still pre-season, but I expect to see increases in property values near the average of the last six-year period. The fundamentals to support values are on good footing. Those fundamentals include:

The list-price-to-sales-price ratio is currently 94.8 percent, which I would describe as normal, especially as compared to the 91.6 percent rate of 2013 (This means that a property priced at $100,000 will sell, on average, for $94,800). Higher ratios lead to higher selling prices. For instance, 2018 had the biggest single year-over-year price increase andthe highest list-price-to-sales-price ratio at 95.9 percent.

Finally, the amount of inventory on the market has reached what I would describe as a normal level. The high of a 20.56-month supply came in 2013. Contrast that with 2018, where there was a 10.7-month supply (helping to drive a big increase in value) and the 11.52-month supply at the time of this writing. Current inventory is at the lowest level with 286 units versus 297 at this time last year (see Current Active Listings chart below). Smaller supply usually leads to higher prices in a good economy.

My friend, Ed, would have loved this market. There is nothing like having years of unforgettable memories with family and friends at your lake place and having your net worth increase at the same time. Cheers to folks like Ed who loved Lake Martin enough to make it home.

If you own a place on Lake Martin, congratulations. The numbers tell me we have smooth sailing for the foreseeable future.

* Rather than look at volatile month-over-month numbers, I prefer to look at a 12-month rolling average. This shows trends more clearly. This article was written in early May for a June publication, and the most complete MLS data was for the 12-month period ending April 30, 2019. The year-over-year comparisons will have eight months of business for the prior year. 2017 was the best year on record (January through December), and eight months of 2017 business went into the 2018 data, making it appear to be the best on record.