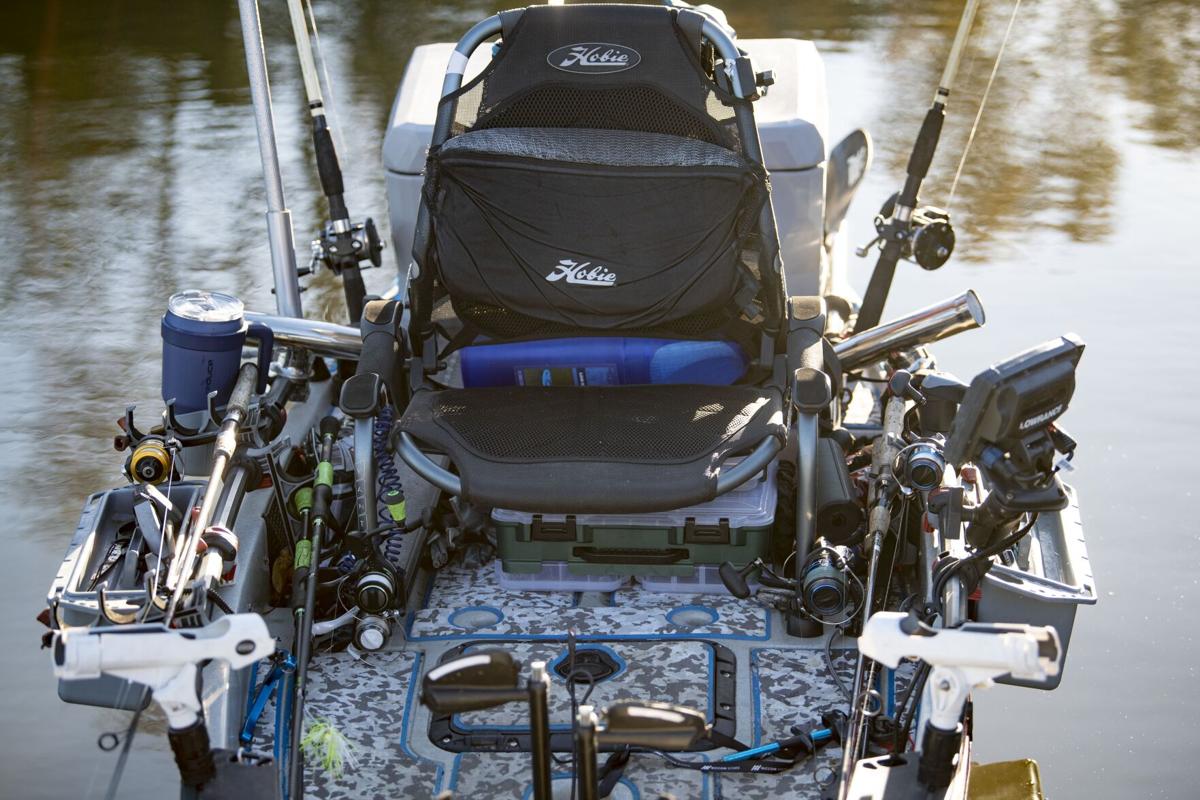 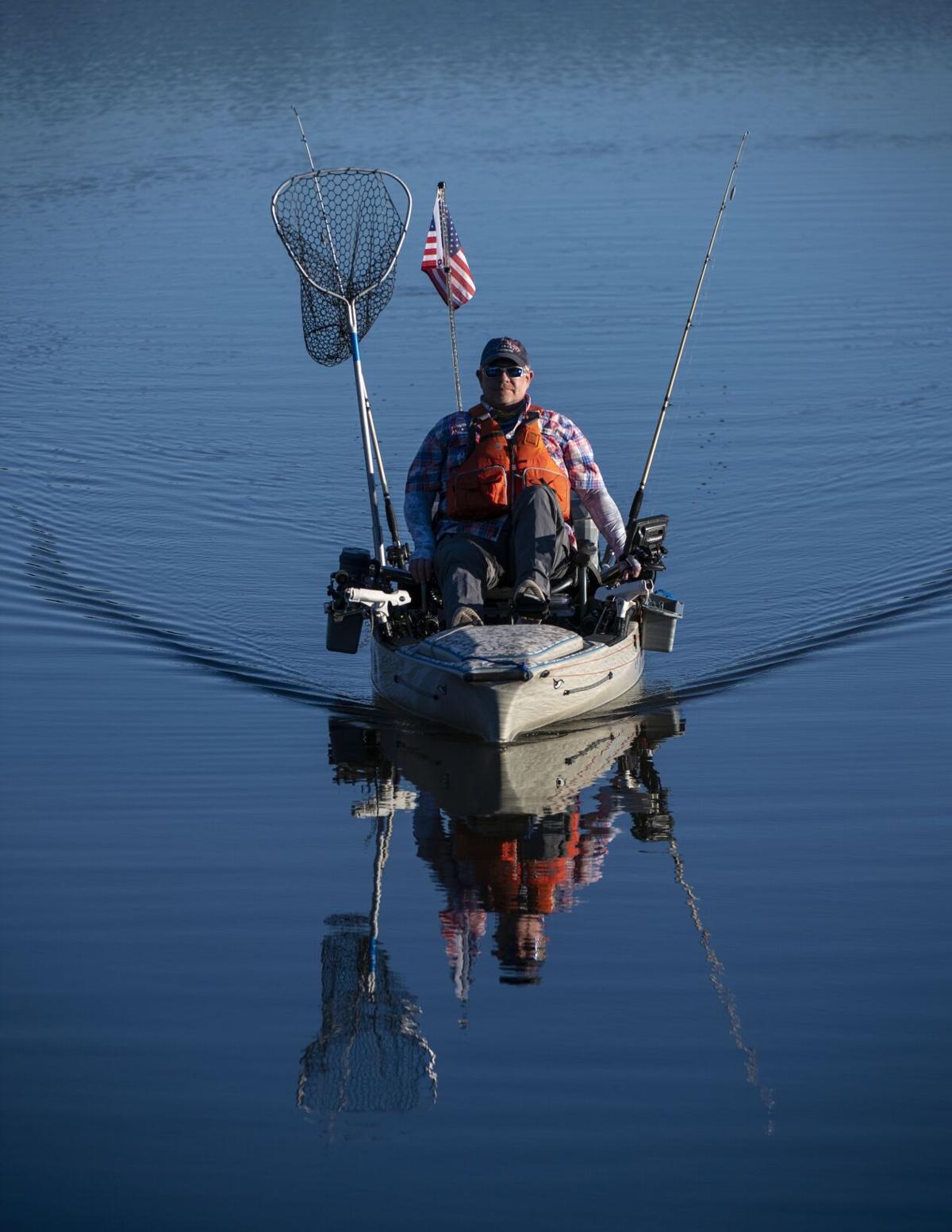 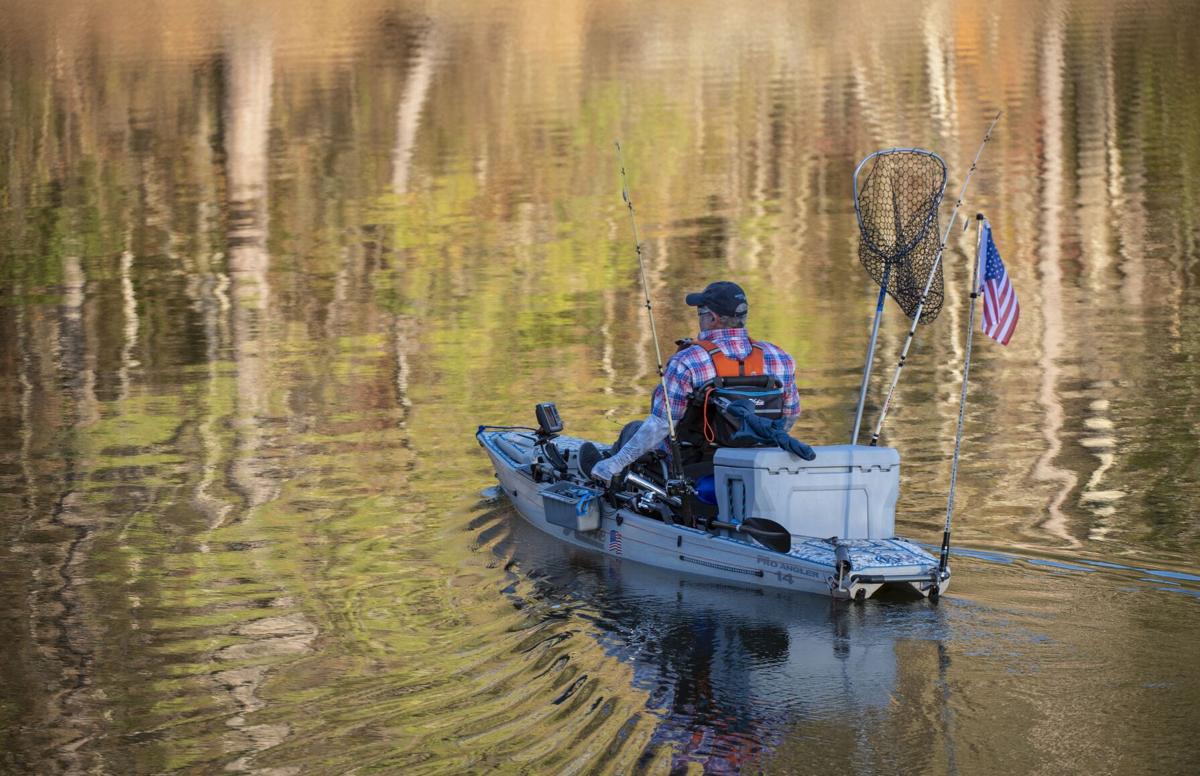 McKay is prepared to reel in whatever he might hook, as the kayak limits his ability to change locations to target species: 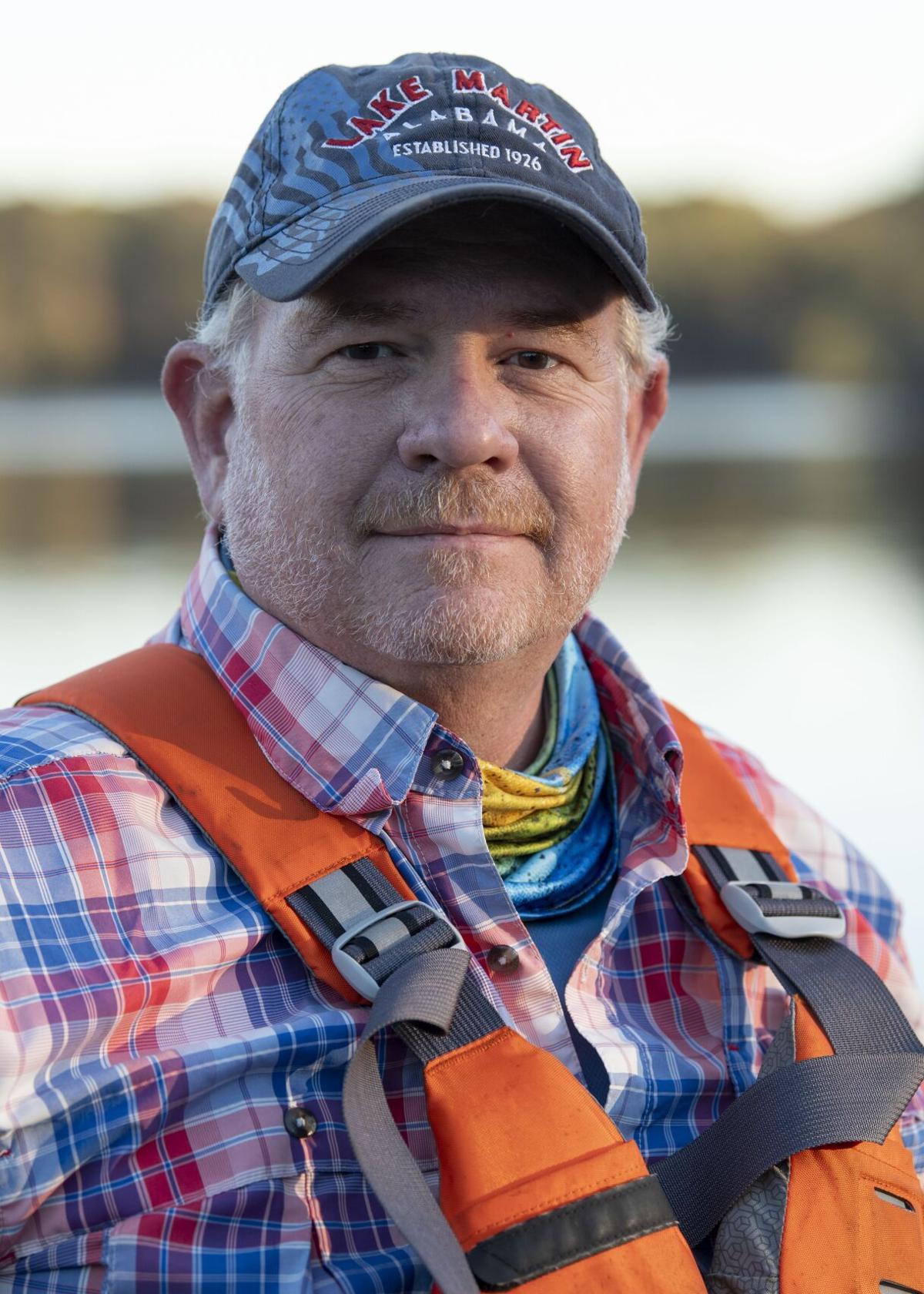 McKay is prepared to reel in whatever he might hook, as the kayak limits his ability to change locations to target species:

Mike McKay’s perspective on fishing changed five years ago when he finally let his brother, Matt, talk him into casting from a kayak.

“Fishing from a regular boat is kind of boring now,” said McKay, who gets out on Lake Martin three times a month or more year-round, depending on the weather.

He carries a rod for everything – spotted and largemouth bass, crappie, catfish and stripers – but fishing stripers from December to March is the best fishing there is on the lake, McKay said.

McKay bought a Hobie PA 14 with a fin drive and researched the setup he wanted, adding about 60 pounds of gear. His boat holds three rods at each side, as well as two trolling rods behind him. Every rod is always in easy reach, and his nets are stationed where they will be handy at all times. He added a fish finder on a lithium ion battery and mounted a cooler in the back to use as a fish box. And on the sides of the kayak, he has mounted tackle boxes, with more tackle in the bow compartment.

For lighting, he put blue LED strips on the sides of the boat and put the flag on a red, white and blue light pole. He also added low red lights inside the cab to give him night vision. The traditional red and green bow lights would be illegal on the vessel, he said.

As the boat is not motorized, he doesn’t have to register it.

Instead of a paddle, he navigates with foot pedals and pulls a cord for forward and reverse.

His safety gear includes a first aid kit and the personal flotation device he always wears while fishing. He keeps a VHF radio onboard and turned on while he’s on the water. In addition, he added a tether, so if the big one pulls him in, he wouldn’t be separated from the boat.

That very well could have happened, he said, when he caught a 15-pound striper at mid-day some time ago.

“I went out early in the morning and fished until about 11, so I was worn out when I came in. My buddy, Randall Baxter, was at the boat ramp when I came in, and he wanted to go out, so I went back out with him. We caught some baitfish; and then, headed to Mallard Point,” McKay said.

“Once we got out there, I dropped my bait, and all of a sudden, my rod was screaming. This fish turned the boat around, and we took off. He ran me all over. I fought it for about 15 minutes, seemed a lot longer than that. At one point, he came beside the boat, and the first look I got at him, I thought, ‘Whoa! How am I gonna get this fish in the boat?’

“My buddy’s nets were too small, so he had to come up alongside me and take my net, and I had to kind of fold the fish to get him in the fish box.”

Fishing from a kayak puts the angler right down on top of the water at eye level to a jumping fish, as opposed to being above the fish in a motorized fishing boat, McKay said.

The kayak runs silent, which gives him an advantage when checking out the local wildlife, he said.

“I had two otters swim right up to me the other day,” he said. “I see a lot of ducks, and I pulled in under a branch one time where an eagle was just sitting there. He didn’t move, didn’t leave, the whole time I was there.

“Fishing from a kayak is more secluded. It’s quiet and peaceful. You can get away from it all,” he said. “I’ve had to outrun a few snakes now and then, but most of them leave me alone.”

At the same time, kayak fishing is more challenging, as an angler cannot easily change locations if the hole he’s on isn’t producing.

“You have to work with what you’ve got where you are,” he said.

So McKay has learned what to put in the boat and where to put in for what he wants to fish and when. In spring and summer, he fly fishes for carp in the grass, launching from Jaybird Landing. He pedals upriver from Jaybird; then, casts away as he drifts downstream.

This time of year is the best for catching the big stripers, which are his favorite target.

“The striper is a big fish in a kayak. It’s the closest thing to saltwater fishing on a freshwater lake, and there’s just something about catching a big fish from a small boat that’s fun,” he said.