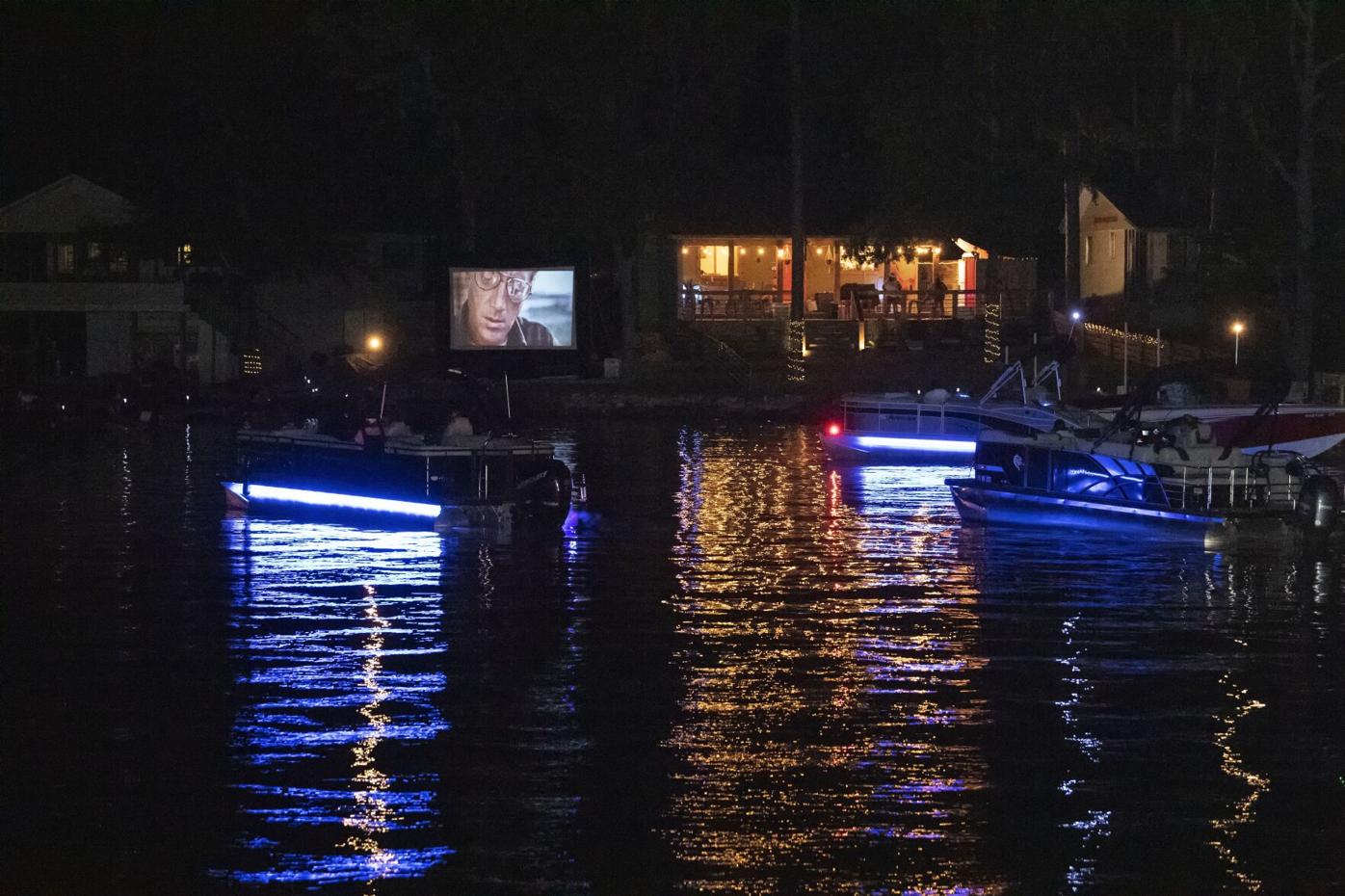 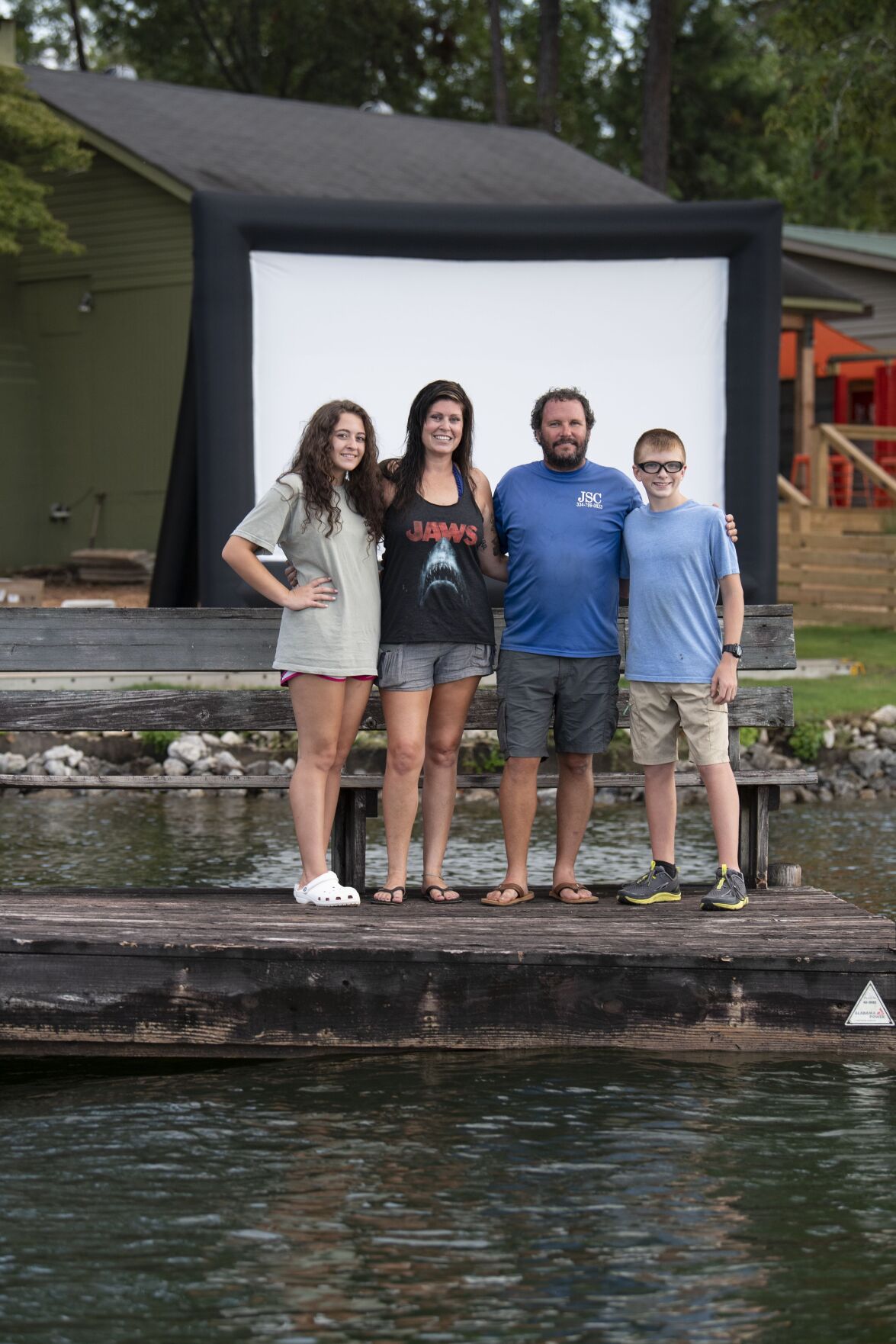 Lake Martin’s Jared and Shellee Smith put a nautical spin on the drive-in movie concept this summer when they set up an inflatable 20-foot screen in their lakeside backyard and projected a blockbuster film on it. About 30 boats anchored offshore from the Smith’s cabin near Crowne Pointe condominiums on Friday, Aug. 21, to watch the 1975 thriller, Jaws, and Shellee Smith said they would show another movie every other weekend as long as weather permits.

“We just love to entertain, and this is a fun way that we can do that,” she said.

The idea was hatched last Halloween when Smith said they knew they would need to have a big screen for a football game if they wanted their friends to come to a gathering they planned to host.

“We tied a 12-foot screen to the supports for our deck, and it worked out great,” she said.

This summer, they upped their game, showing the 1978 horror comedy Piranha at the end of July.

“That was fun. The kids were in the water with floats, and we put green glow-sticks in the water to attract the fish,” Smith said. “It was kind of corny, but it was fun.”

Two weeks later, they showed Finding Nemo. Jaws was the couple’s third movie of the summer, and the Smiths plan to continue the entertainment into the fall and early winter.

“We hope to do a Christmas movie before it gets too cold,” Jared said.

Married one and a half years, Smith and Jared each had children from previous marriages. On alternate weekends, all of their children are with them at the lake, so the lakeside movies are something they do together as a family.

To improve the quality of the experience this summer, they exchanged the 12-foot screen under their deck for a free-standing inflatable 20-foot model, which they erected between the two houses they own near the mouth of Blue Creek.

They also purchased the old sound system from Chuck’s Marina, along with a new projector.

“We’re learning the technology as we go along,” Smith said.

“We got the old sound system from Chuck’s after the first movie because the sound we had wasn’t good,” Jared said.

Smith uses her laptop computer to run the DVD movie, and the projector throws the image up to the screen.

The couple bought the cabins last summer. They moved to the lake full time and are making changes to the houses. They renovated the smaller house first and rent it through an online vacation service. Work began on the addition to their personal home this year.

Jared, who owns JSC Docks and builds docks on Lake Martin, grew up at the lake and started his company five years ago. Shellee and he looked forward to hosting friends and family during their first full summer at the lake, but the coronavirus pandemic made it difficult.

“This is just us being with friends and having a good time. Everyone else is welcome to stop by and watch the movie in their boats,” Smith said. “Just please anchor out past the docks because the kids are in the water off the dock.”

The Smiths began their Aug. 21 set up at about 7 p.m., testing the movie and sound with the help of Jared’s son Mariner. After making sure the equipment was functional, they adjusted the projection to center the show on the screen.

Boats started to pull in around 7:30 p.m., just as the light faded from the sky and the temperatures cooled after a hot day on the lake. Friends who arrived by car settled into lawn chairs on the dock while the Smiths played country music through the sound system until the movie started at 8:30 p.m.

“As it gets dark earlier, we’ll start the movie sooner, but we wanted to make sure everybody had time to get here and relax before the show started,” Smith said.

They chose Jaws for the Aug. 21 show because it was Shark Week, and they liked the idea of keeping with the theme. Labor Day weekend, the family will watch Smokey and the Bandit, Smith said.

“We put it out on Facebook and asked for suggestions for the movies. We’ll definitely show Grease sometime. A lot of people suggested that one. Maybe Goonies. We like the scary movies. They’re just fun when you’re floating in the lake,” Smith said.

For the first movie at the end of July, 12 boats pulled up to watch. For Finding Nemo, there were 15 boats. For Jaws, the estimate was close to 30, but it was hard to get an accurate count once darkness fell and boaters continued to arrive. Though most of the boats anchored apart, a few rafted up.

“With movie theaters closed and people not able to get out and do things they normally would do, this is just an opportunity to get out and have some fun,” Smith said.