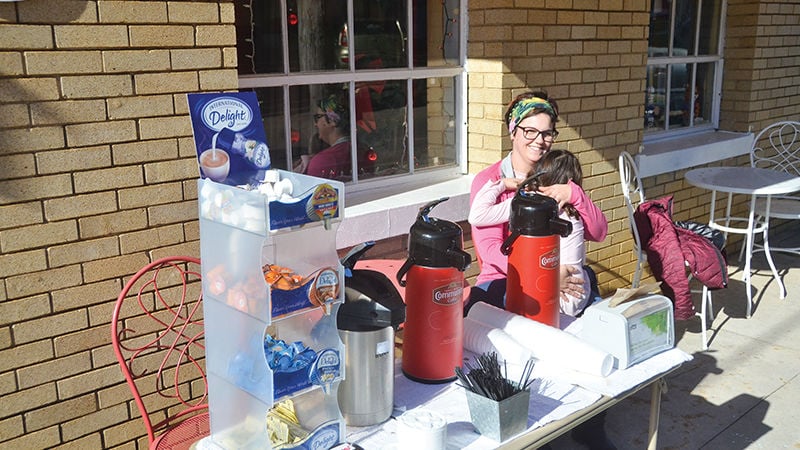 Jeneé Jones with River Perk Coffee watches the coffee and hot chocolate stand the coffee shop set up for volunteers and first responders helping clean up after Saturday’s tornado. 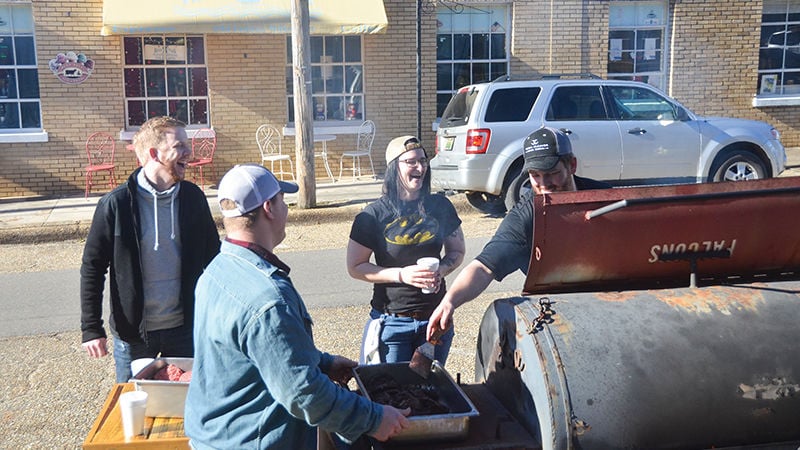 Leanne Crews, center in glasses, and other employees from Coosa Cleaver grill up hamburgers Monday afternoon for volunteers and first responders cleaning up after Saturday’s tornado.

Jeneé Jones with River Perk Coffee watches the coffee and hot chocolate stand the coffee shop set up for volunteers and first responders helping clean up after Saturday’s tornado.

Leanne Crews, center in glasses, and other employees from Coosa Cleaver grill up hamburgers Monday afternoon for volunteers and first responders cleaning up after Saturday’s tornado.

A path of destruction was left behind in Wetumpka after Saturday’s twister but it didn’t take long for images of the devastation to make their way to social media, where they were shared by thousands.

The next day, area residents and beyond were moved to action.

Elmore County Emergency Management, with the assistance of a volunteer group, set up a registration station at the Elmore County Department of Human Resources building. Coordinators opened the doors at 8 a.m. Sunday and people began coming in by the dozens to help their neighbors with cleanup efforts.

Tammy Spencer, of HandsOn River Region in Montgomery, said more than 500 people showed up before noon Sunday to lend a hand to victims of Saturday afternoon’s storm.

According to Spencer, while the majority of the volunteer cleanup efforts are centered in downtown, HandsOn River Region sent several helping hands into all of the affected areas.

“We have chainsaw teams, people with heavy equipment,” Spencer said. “We also sent five chainsaw teams with a total of 50 people out into the areas where there were trees down and trees on houses. They are cutting up the trees and removing trees and tarping houses.”

Before going out to lend a helping hand, volunteers had to take a brief safety course, and Spencer said there are a few things to consider before registering.

“They need to be 18 to volunteer without a guardian or parents signature,” Spencer said. “(People ages) 14 through 17 would need to have a parent or guardian that comes with them and stays with them in order for them to volunteer.”

HandsOn River Region is the largest team assembled of volunteers but it certainly isn’t the only one. John Cordell, a member of the Alabama Southern Baptist Disaster Relief, said 10 people were deployed from the Montgomery Baptist Association to help. They were mostly chainsaw crews, helping to clear large trees out of people’s yards.

“It’s important because we’re told to be doers and not just hearers of the word,” Cordell said. “And we’re told to love our neighbors as we love ourselves. I would love for somebody to come up here and do this if this were my house, so as a representative of Jesus Christ, I can’t do nothing but come up here.”

Members of the Red Cross of Montgomery also set up shop at Wetumpka High School, which opened its doors as a shelter throughout the week. The Church of the Highlands and Bridge Church provided food at the shelter.

In downtown Wetumpka, the businesses that survived the storm were open to help in the recovery effort.

“There were a lot of us here when it happened Saturday,” said Leanne Crews, a bartender at Coosa Cleaver. “We decided that night to do what we could to help. A friend of the owners brought the grill. We started cooking early (Sunday) morning. “We’ve been cooking up burgers for volunteers, first responders and those affected by this. We’ve had a lot of people helping out. Flowers Bakery donated buns, and some people have even donated the hamburger meat.”

“We all recover together,” he said. “We fed the whole city of Wetumpka (Monday). We offered free lunch to volunteers and first responders, those affected and those just passing through. Everybody’s welcome today.”

The owners of River Perk also did their part, giving out free coffee throughout the weekend and into Monday.

“I feel it’s a responsibility of us downtown,” River Perk Coffee owner Johnny Oates said. “We’ve got a great volunteer base here. There’s a great love of the community. It’s a blessing to me to serve someone else.”

The spur-of-the-moment help right after the tornado was stunning.

“Within 30 minutes probably, people just showed up with chainsaws,” said Leslie Mattox, who lives on Green Street, where six large fallen trees rendered it impassable. “Out here in the pouring rain, they were clearing the road. They were just random people; we didn’t know a single one of them.”

For those would like to help with the ongoing recovery efforts but cannot volunteer, Spencer said the Central Alabama Community Foundation is accepting monetary donations that will be given in full to Wetumpka.

“One-hundred percent,” Spencer said. “Nothing will be taken out of it.”

To give to the foundation, go to https://cacfinfo.org/category/news/.

There are also plenty of other ways to contribute; Stubbs said people can call 211 locally or bring donations of food, clothes and household goods to Adullam House and Faith Baptist Church, and non-perishable food to the Elmore County Food Bank.

For more information about how to donate through the Central Alabama Community Foundation, call CACF president Burton Crenshaw at 334-264-6223.