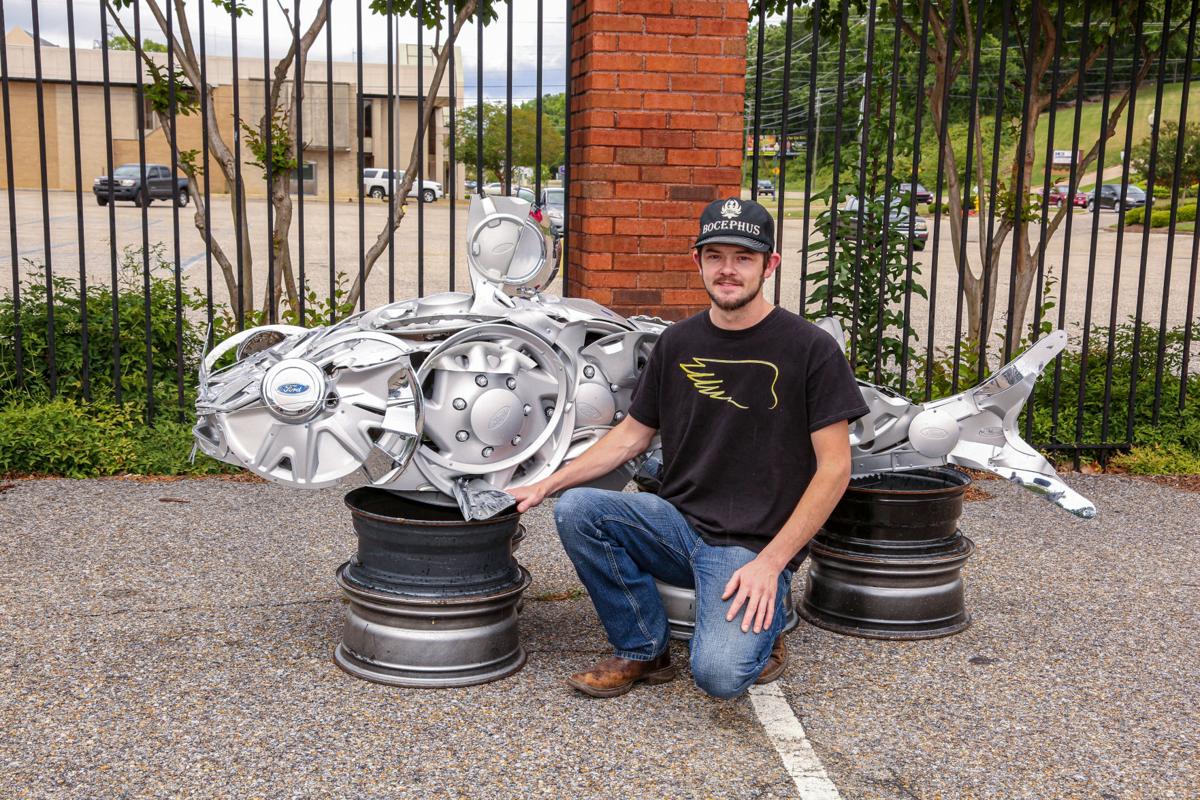 Brett Jakel delivered his work of art to downtown Wetumpka earlier this year. 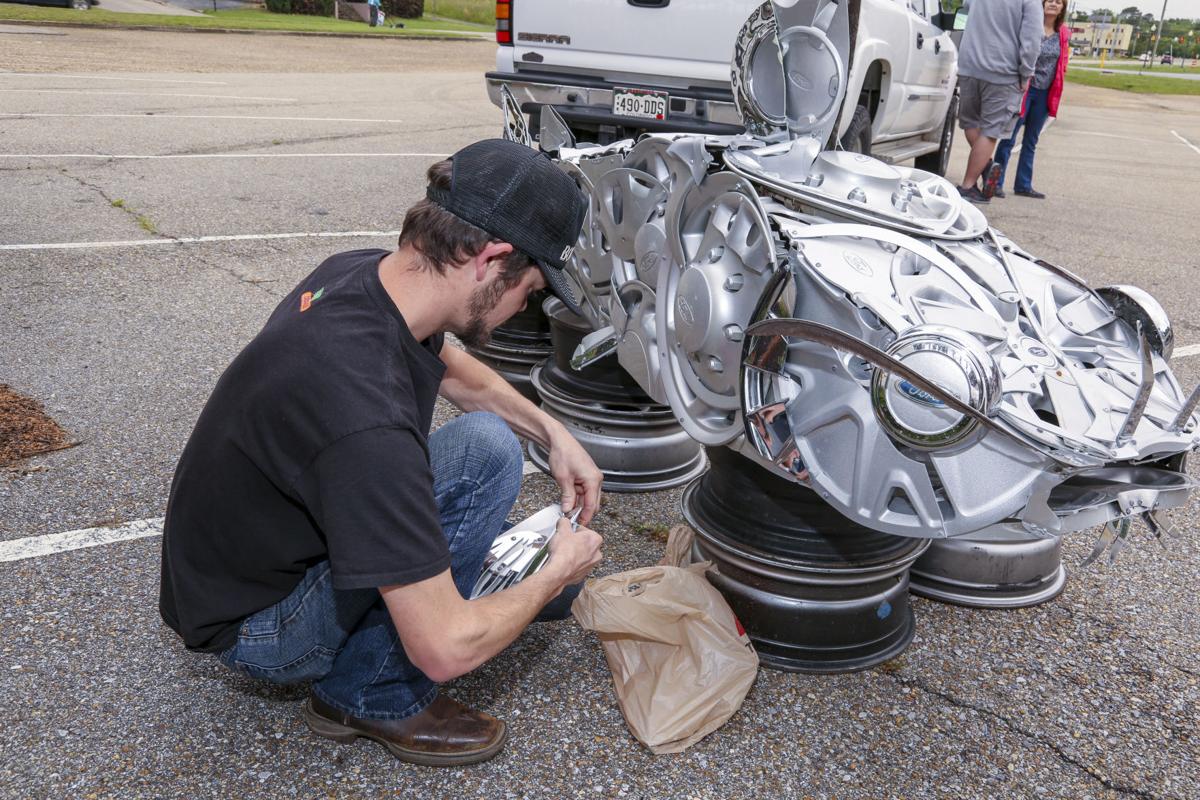 Jakel cuts hubcaps to fit the vision for his creations. 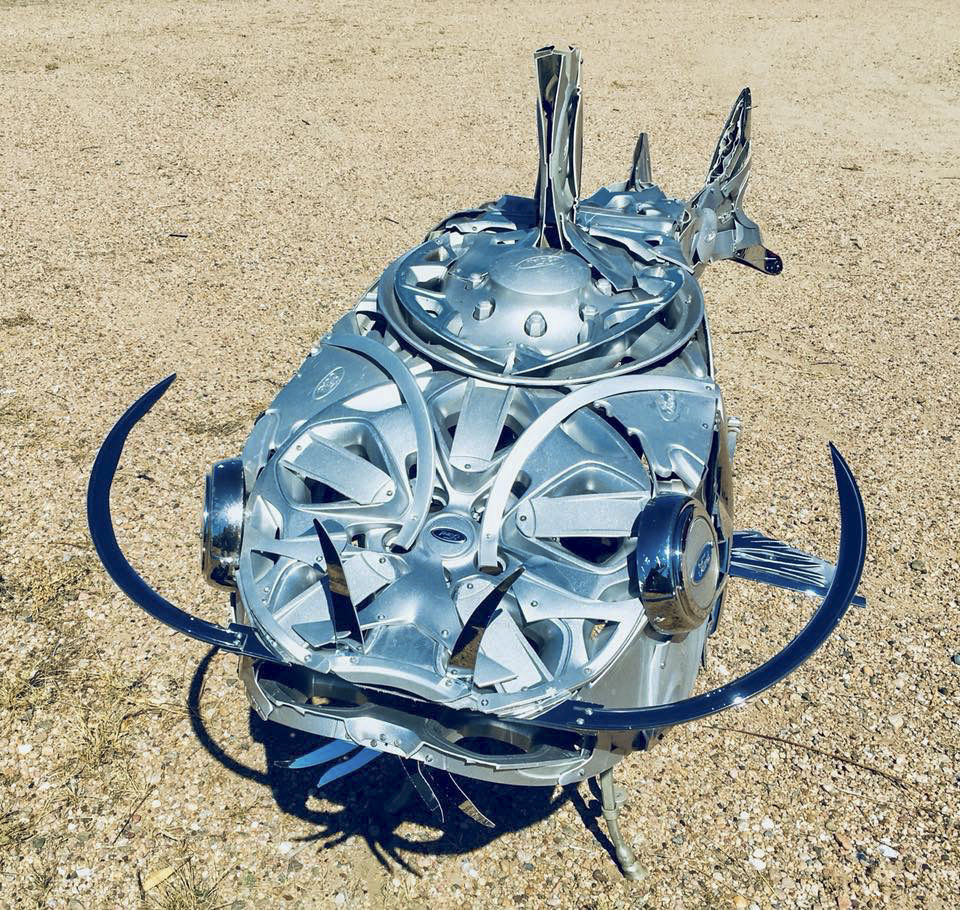 The finished artwork measures 7 feet long and weighs about 70 pounds. 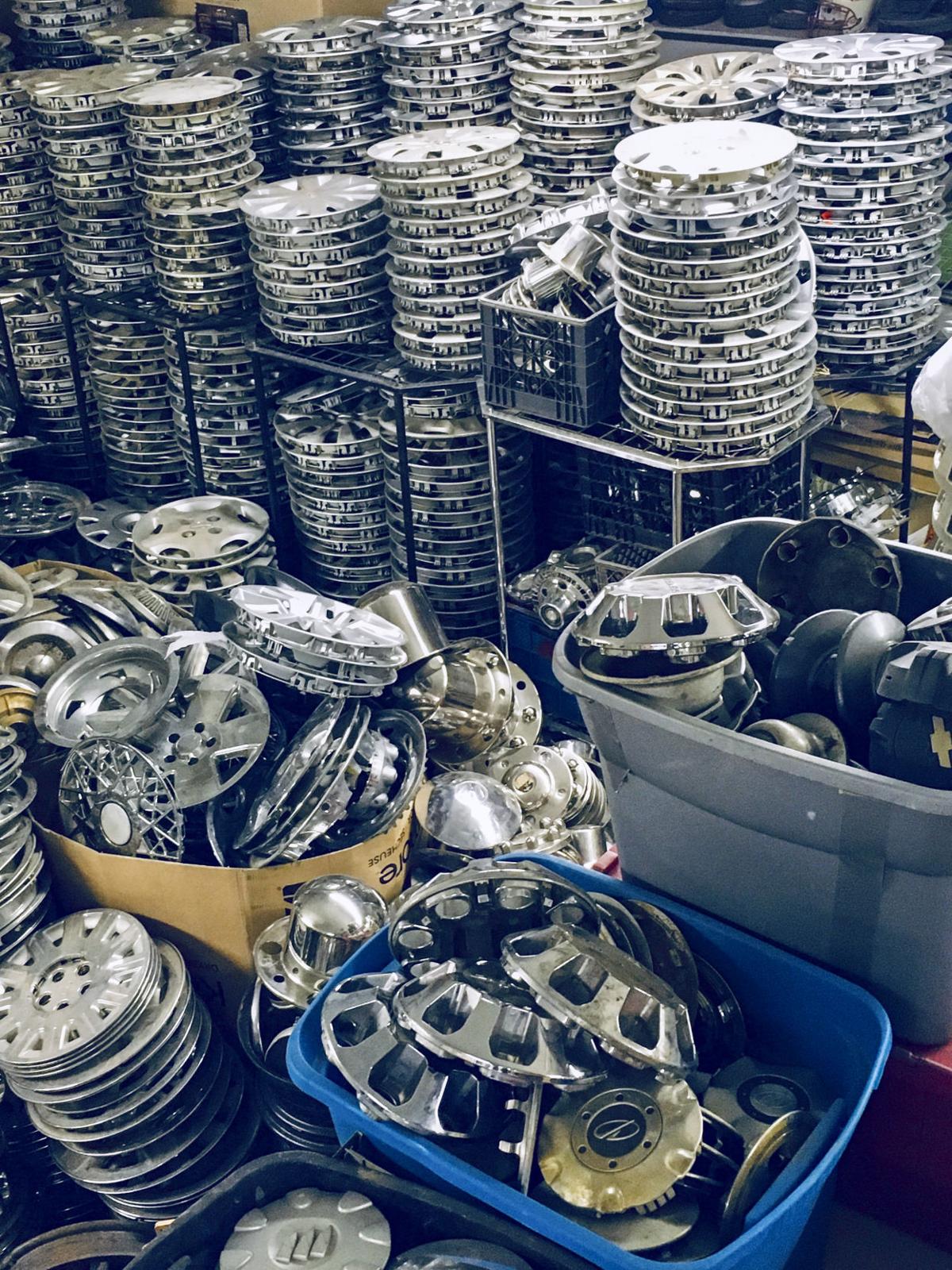 Jakel has collected nearly 50,000 salvaged hubcaps he has organized into piles.

Brett Jakel delivered his work of art to downtown Wetumpka earlier this year.

Jakel cuts hubcaps to fit the vision for his creations.

The finished artwork measures 7 feet long and weighs about 70 pounds.

Jakel has collected nearly 50,000 salvaged hubcaps he has organized into piles.

Hubcaps that Colorado artist Brett Jakel collected for nearly 20 years were transformed into an artistic catfish that made a long journey to find a new home in Wetumpka. The artist hopes his own future plans follow suit, as he instantly felt a calling to the charming Elmore County town.

Shellie Whitfield, Wetumpka Chamber of Commerce executive director, was a friend and art mentor to Jakel when she lived in Colorado. She caught wind of a fish statue he had been working on and asked if Jakel would be interested in finishing the piece for the City of Wetumpka.

“I actually had built it as an idea just because I’m an avid fisherman. When Shellie reached out with the idea of it being a catfish piece in Wetumpka, I finished it up and improved it with more detail,” said Jakel.

Jakel had casually worked on the piece as a hobby over the last two years but was motivated to finish it up within five days after Whitfield’s call. The catfish measures 7 feet long and weighs about 70 pounds. Jakel and his parents made the trek to Wetumpka in their pickup truck with the sculpture.

“Jakel creates his one-of-a-kind artwork for collectors all over the world. I have been his friend and avid supporter for years. When I saw the Big Fish I knew it had to come to Wetumpka – either to my house, studio or our downtown,” said Whitfield.

Wetumpka Mayor Jerry Willis also fell in love with the piece when he saw a picture of it and agreed Wetumpka needed to be its home base, she said.

The catfish piece is made up of plastic and hubcaps that Jakel has found along the interstate over the years. About 78 American hubcaps were used to complete the Wetumpka structure. As a result, Collier Ford sponsored the purchase of the piece, as all the hubcaps were Ford brand.

“The general way I do it is I just cut pieces that I see, that may already look like part of a fish, for example, and cut that out of the hubcap,” he said. “Everything is held together with screws and bolts.”

Since Jakel was 11 years old, he’s been scouring roadsides for unusable, broken hubcaps, amongst other possible treasures. He now has a garage filled with nearly 50,000 hubcaps, shelved in an organized fashion. A very small corner of his garage is carved out for building art and storing his tools.

“It started when I was little, I was always fascinated with shiny wheels. I started volunteering to clean up trash and found a few hubcaps, so I started a collection. It just became my thing,” said Jakel. “I couldn’t bring myself to throw away a perfectly good hubcap, even if it was broken.”

His mind began racing with inspiration, and eventually, Jakel decided to craft something out his metal collection.

“I had all these ideas in my head. I put one together, and it just fueled more ideas,” he said.

The Colorado native has big plans to follow in Whitfield’s footsteps and make the trip South again – maybe for good.

“That was my second visit to Wetumpka, and that trip kind of sealed the deal. That’s where I want to live someday. I just fell in love with it. First of all, in comparison to where I live, people are about 180-degree-different in terms of kindness, friendliness and genuineness,” he said. “The couple days I was there felt more like home than it has here for a long time.”

The specially crafted catfish statue will be unveiled later this month.

“It is a wonderfully funky sculpture created by a wonderful artist. I would love to see more artwork like this in our area,” said Whitfield.

For more information about Jakel and his artwork, check out his Facebook page Hubcap Creations by Brett Jakel.