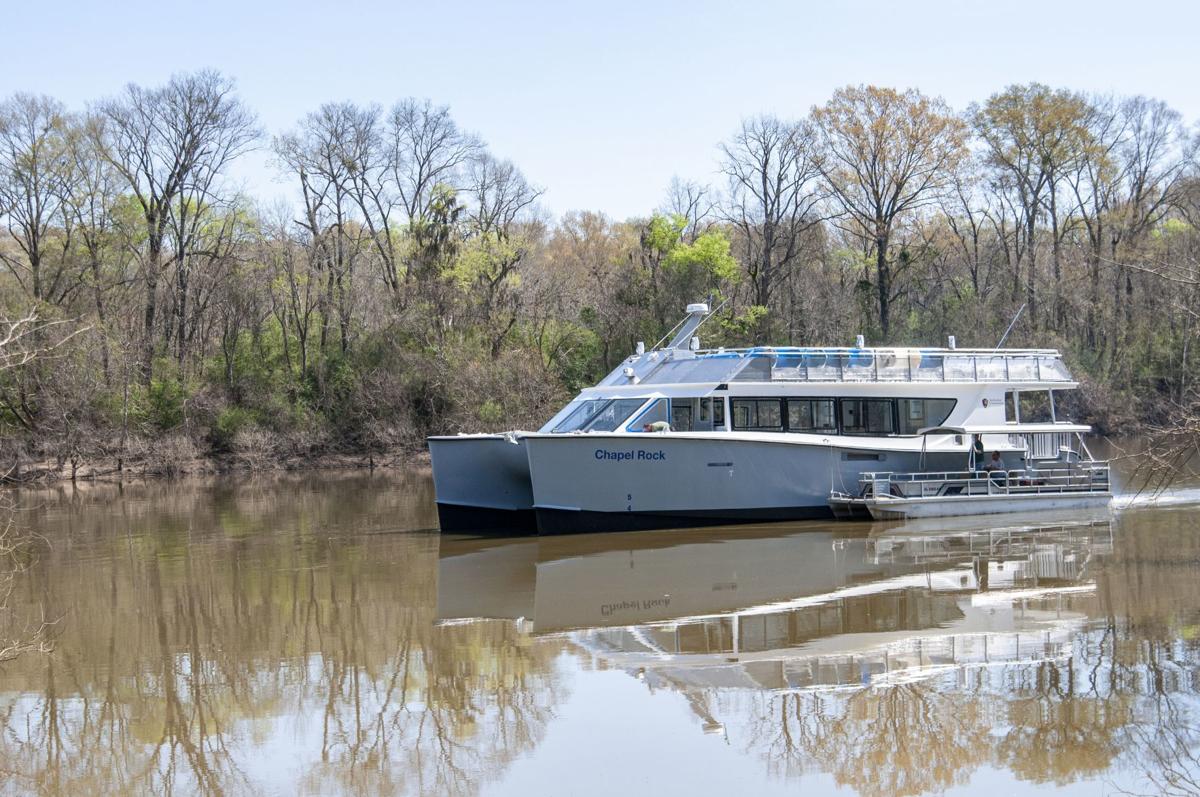 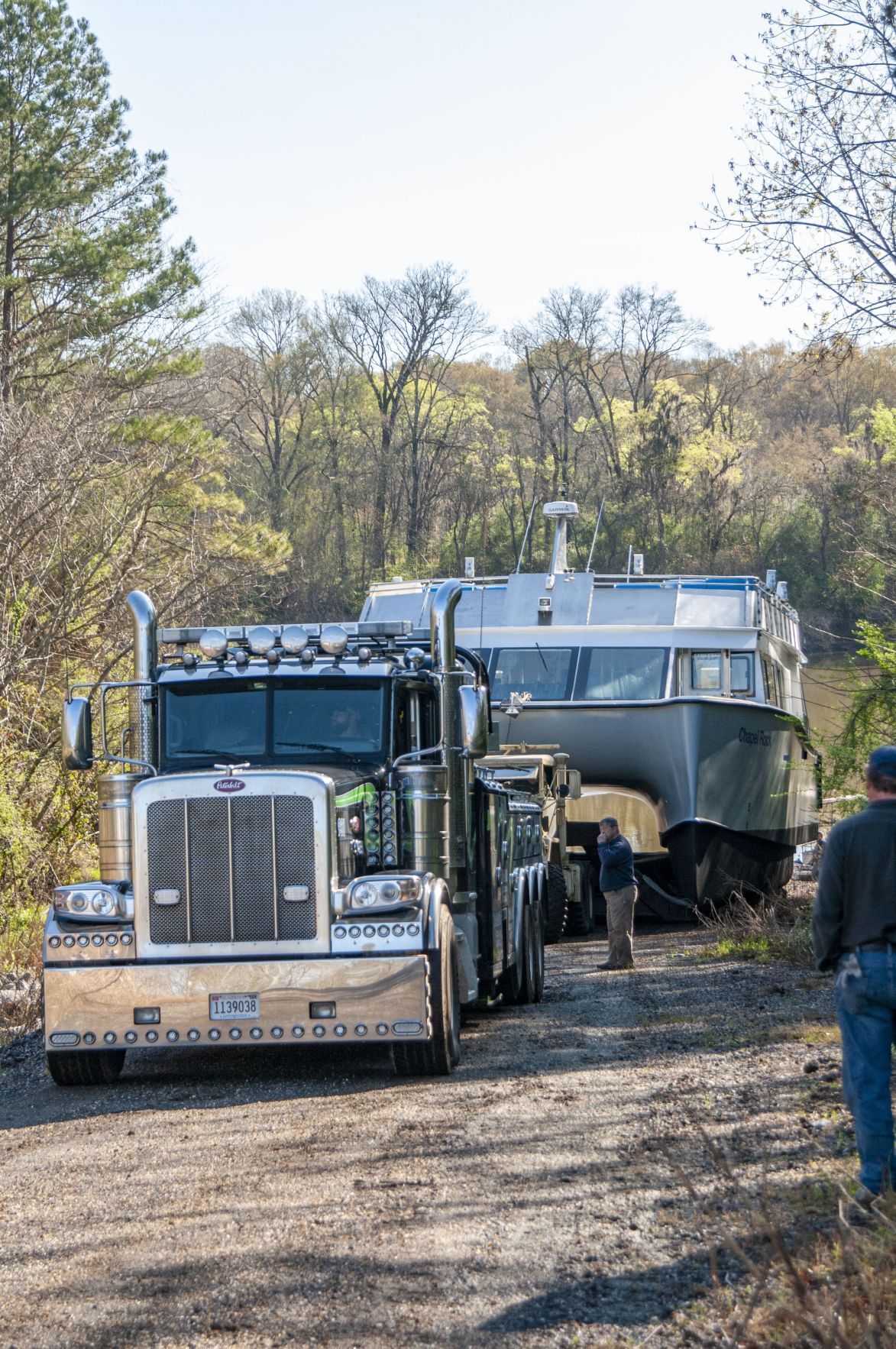 A wrecker tied to a truck helps launch the boat into the Coosa River. 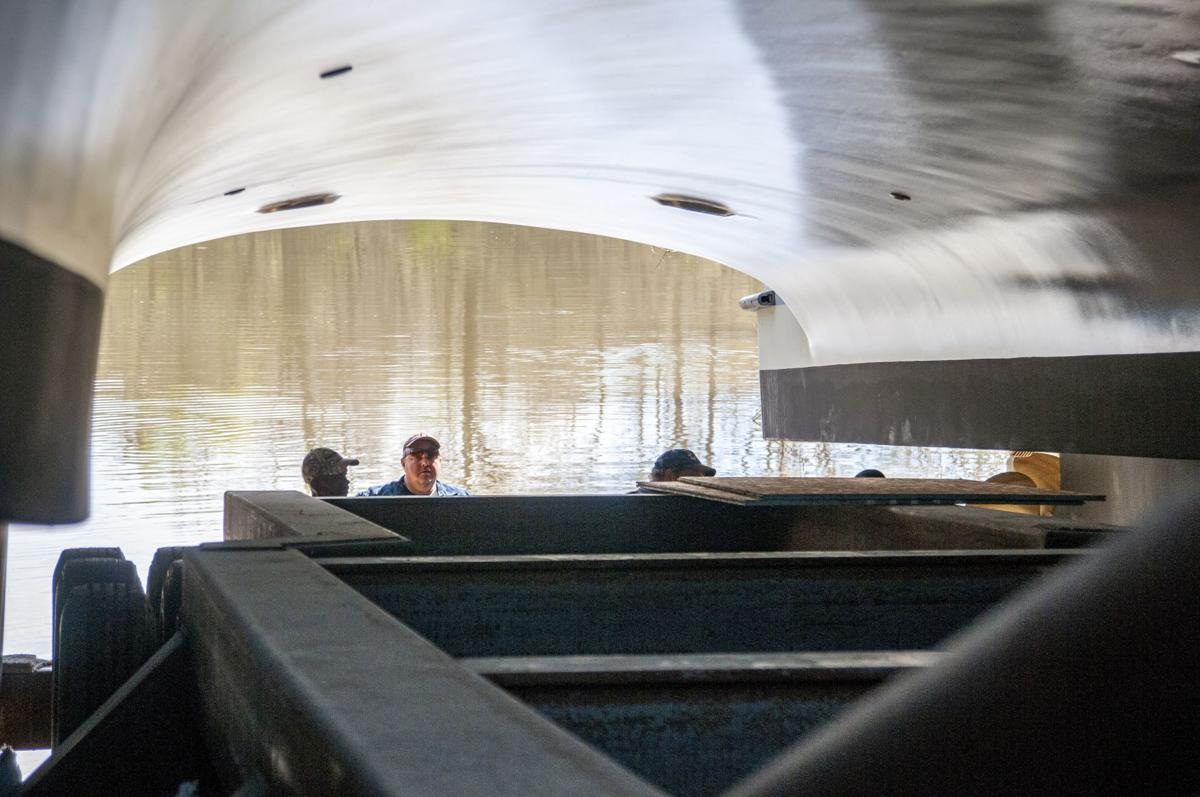 The fiberglass catamaran is the second of its kind. 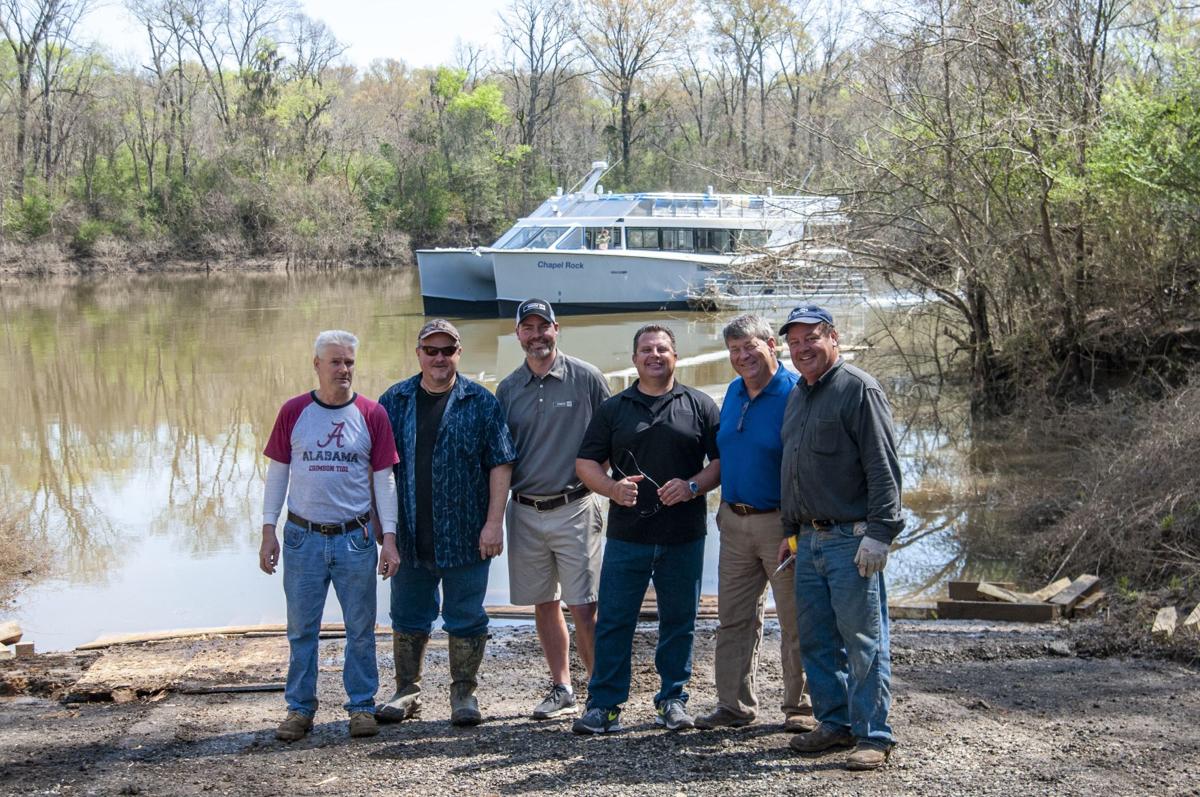 It took a crew to build the boat, get it in the water and finalize its settings. 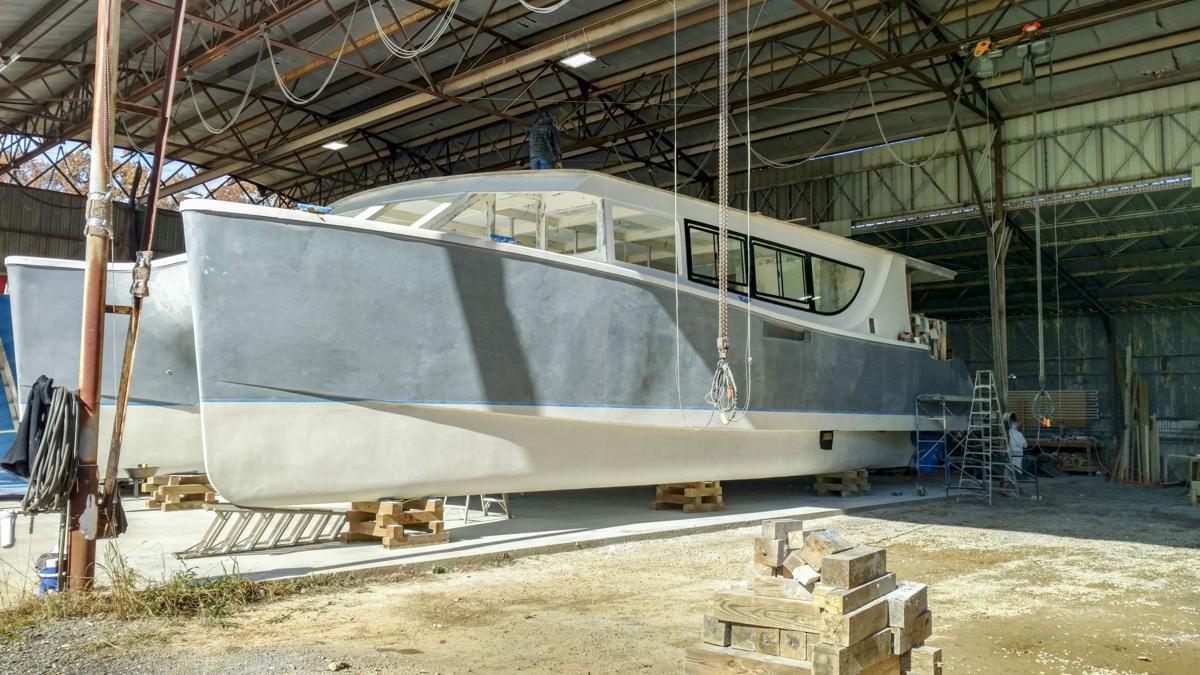 The completed vessel took more than a year. 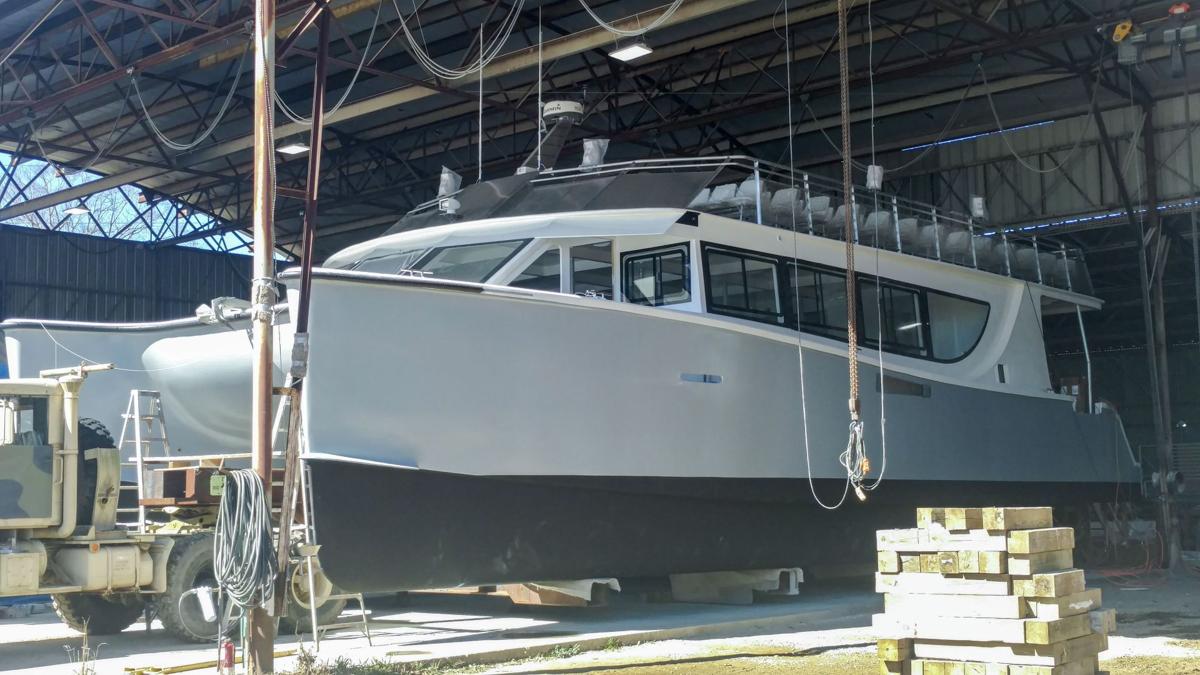 A coat of paint finalizes the process.

A wrecker tied to a truck helps launch the boat into the Coosa River.

The fiberglass catamaran is the second of its kind.

It took a crew to build the boat, get it in the water and finalize its settings.

The completed vessel took more than a year.

A coat of paint finalizes the process.

A hand-built 65-foot catamaran tour boat was made in Wetumpka and journeyed for nearly 20 days through the lake and river systems to its final resting point in Munising, Michigan, to be used as a tourist attraction at Pictured Rock Cruises.

This is the second boat of its kind to come out of Elmore County, ordered by Pictured Rock Cruises owner John Madigan.

“We had to start with a plug, or representation of the finished product; and then, create a mold from that. We laid up the hull and removed it out of the mold to begin the process of building the boat from scratch,” said Madigan, who worked with a team of six to eight craftsmen.

From there, the fiberglass hull was outfitted with the mechanical infrastructure, which took a little over a year to complete.

“It was a brand new design – had to outfit the whole boat. Since it was the first of its kind, we had all kinds of things to figure out,” said Madigan. “The first and second ones are always tougher than the next one.”

The 100,000-pound boat was constructed off Sanford Lane at the old Bonner boat building, and it was launched into the Coosa River a few months ago. The three-and-a-half hour process of getting the vessel into the water required a wrecker cabled to a truck that was towing the trailered boat.

“The wrecker was needed because there would not be enough brakes on the truck to stop the weight of the boat from pulling the truck straight into the water,” said Madigan.

Seamon Wreckers controlled the wrecker cable, as someone drove the truck attached to the boat trailer. Additional employees were on site, along with technical site operator John Strickland, to ensure things went smoothly.

Some issues caused by the boat ramp’s cement lip prevented the trailer from easily rolling into the river. The team had to put wooden blocks under the tires and keep moving them backward, along with slabs of plywood under the wheels of the trailer.

“Once we finally got the boat in the water after a lot of trial and error, a pontoon boat intercepted it. Then, Caterpillar engineers boarded the vessel to start the engine and get things running, and a steering company adjusted the settings,” said Madigan.

The first task was to ensure the boat complied with Coast Guard standards where it was inspected in Montgomery.

The catamaran began it maiden voyage to Mobile for a stability test to verify that the boat could handle its projected 150-person capacity. From there, the team took the boat to Demopolis where it had to wait a few months until the river system was clear of snow and ice.

“So up to this point, the boat has traveled the Coosa River to the Alabama to the Mobile River and the Tombigbee,” said Madigan. “The next step is to travel to the Tennessee River, then Mississippi to Illinois and up the St. Mary’s River into Lake Superior. It’s a lot of bodies of water we cover.”

The unique structure is suitable for its purpose, as it is wide and stable enough to handle up to 128 people on the upper deck. It also can travel up to 30 miles per hour and has low draft as it draws 3-1/2 feet of water.

The inaugural tour vessel is in action in Apostles Island, Wisconsin, providing tourists and residents access to the scenic views of the area. Madigan said a third boat is in the works, but its destination is still unknown.