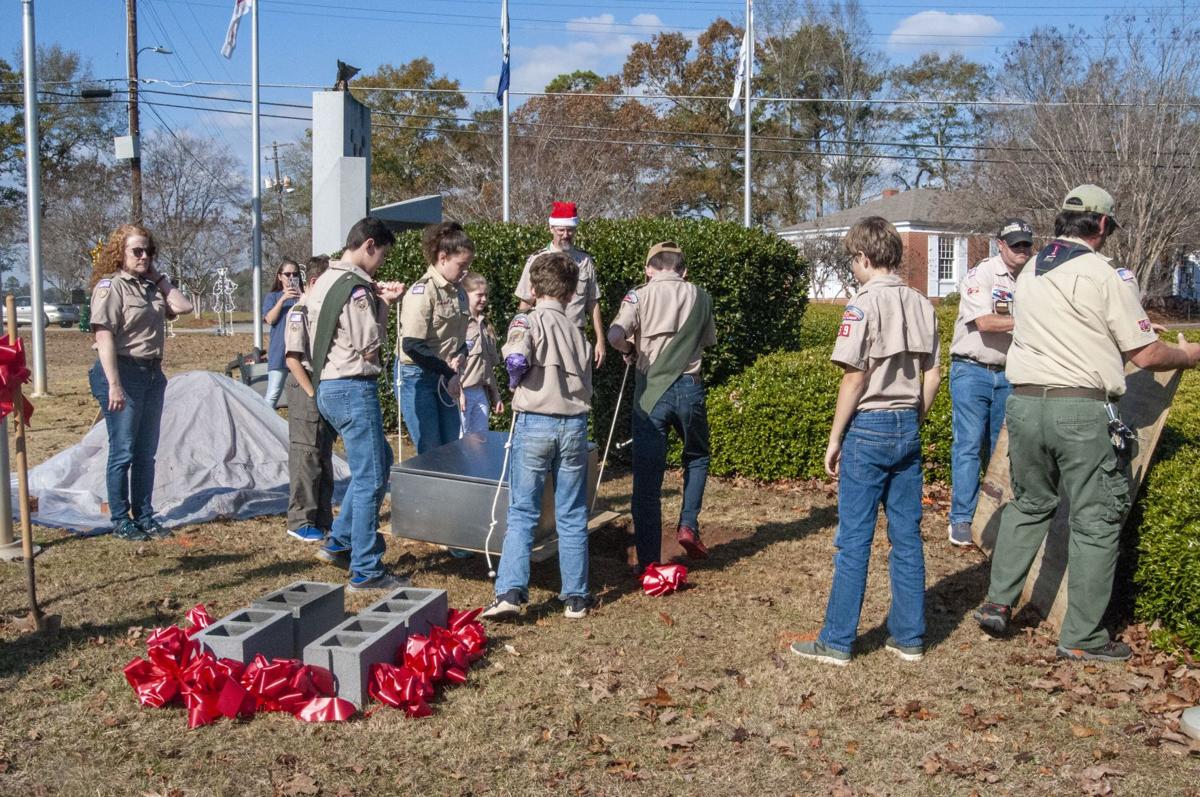 The THS band opens the ceremony performing the national anthem. 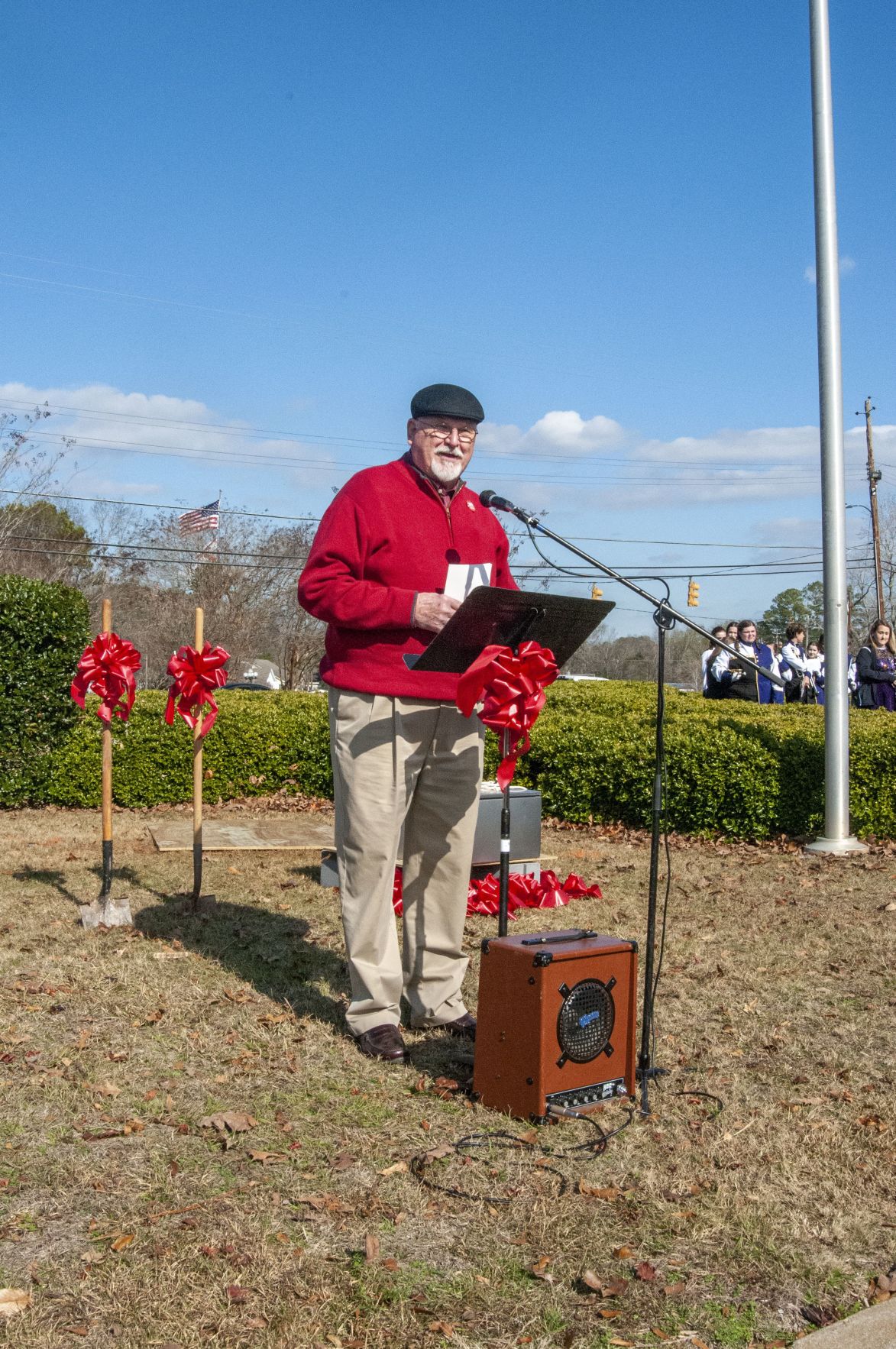 Bob Taunton with THPS welcomes the crowd to the ceremony. 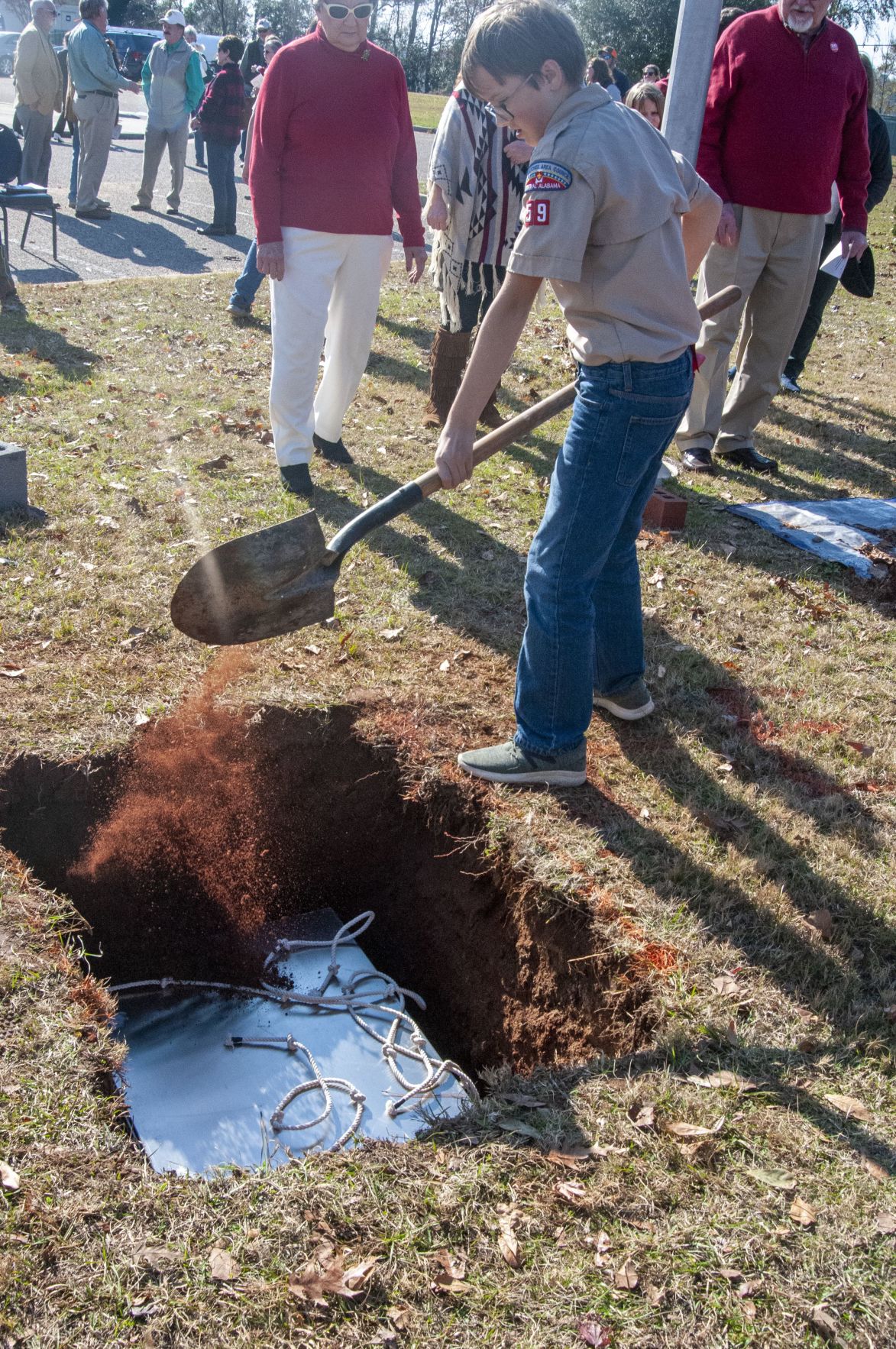 Guests shovel scoops of dirt into the burial location.

The THS band opens the ceremony performing the national anthem.

Bob Taunton with THPS welcomes the crowd to the ceremony.

Guests shovel scoops of dirt into the burial location.

Residents of Tallassee this month acted on the unique opportunity to leave lasting legacies in a time capsule buried on the grounds of City Hall to honor Alabama’s Bicentennial.

Hosted by the Talisi Historical Preservation Society, a total of 45 caplets were filled with old watches, photographs, electronics, letters to the future and more. Boy Scout Troop 59 ceremoniously lowered the waterproof stainless steel box into the ground earlier this month.

“Each participant was given a letter to store that will be passed down to future generations, so on Dec. 14, 2119, family members can claim their capsules from their ancestors,” said Bob Taunton, with the Talisi Historical Preservation Society.

Every caplet is engraved with the individual or organization that sponsored it to be sure it remains identifiable in 100 years.

The preservation society brainstormed the idea earlier this year, knowing they wanted to celebrate Alabama’s 200-year birthday in a bold way.

The projected goal was to fill a time capsule with 200 caplets, but they downsized to one suited for 100 based on community response. The Tallassee City Council awarded the THPS $3,000 as seed money to launch the initiative.

“It’s great to take an interest in history. We need to look at history to learn about cultures of the past and their mistakes. It’s important to remember where we came from and where we are going,” said Tallassee Mayor Johnny Hammock.

Troy Wallace, city employee, came out the day before the ceremony to dig the capsule cavity, which is located in front of Memorial Park.

“We have the best city government you can imagine. Troy didn’t just dig the hole, but he squared it up, covered it up and set aside the dirt and covered that up, too,” said Taunton.

As the Tallassee High School band rattled off a drum roll, the time capsule was lowered into the ground in a military-styled ritual by the Boy Scouts. Attendees then had the opportunity to each shovel a scoop of dirt over the box as a symbolic gesture.

“To the State of Alabama – Happy Birthday; we salute you,” said Taunton.

The area will eventually be designated with a granite marker indicating the time capsule’s location, crediting the historical society and providing instructions on when it should be opened. The THPS will install the sign early next year.

The THPS’s mission is to preserve history, and the organization supports the Talisi Falls Museum, which is open to the public. It also maintains the Superintendent’s House behind City Hall, which is available for special events.