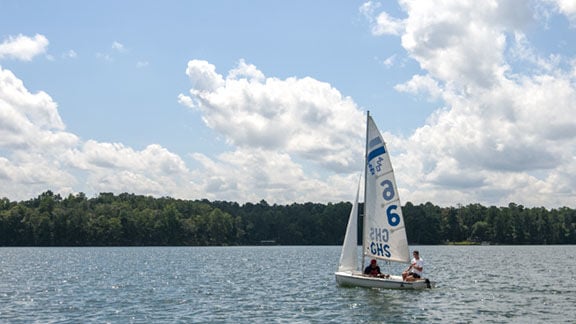 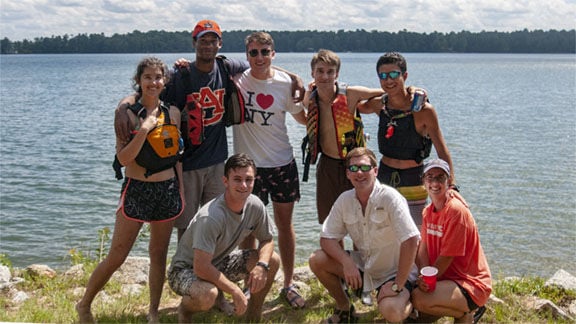 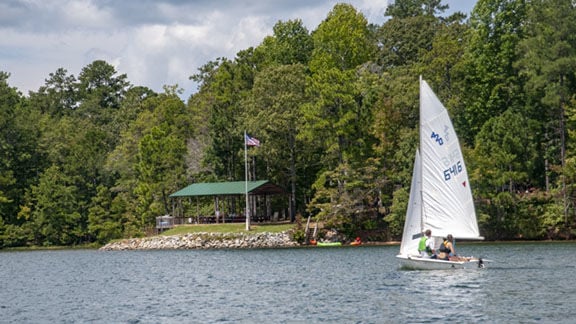 Lake Martin is the perfect practice for the AU sailing team. Photo by Amy Passaretti 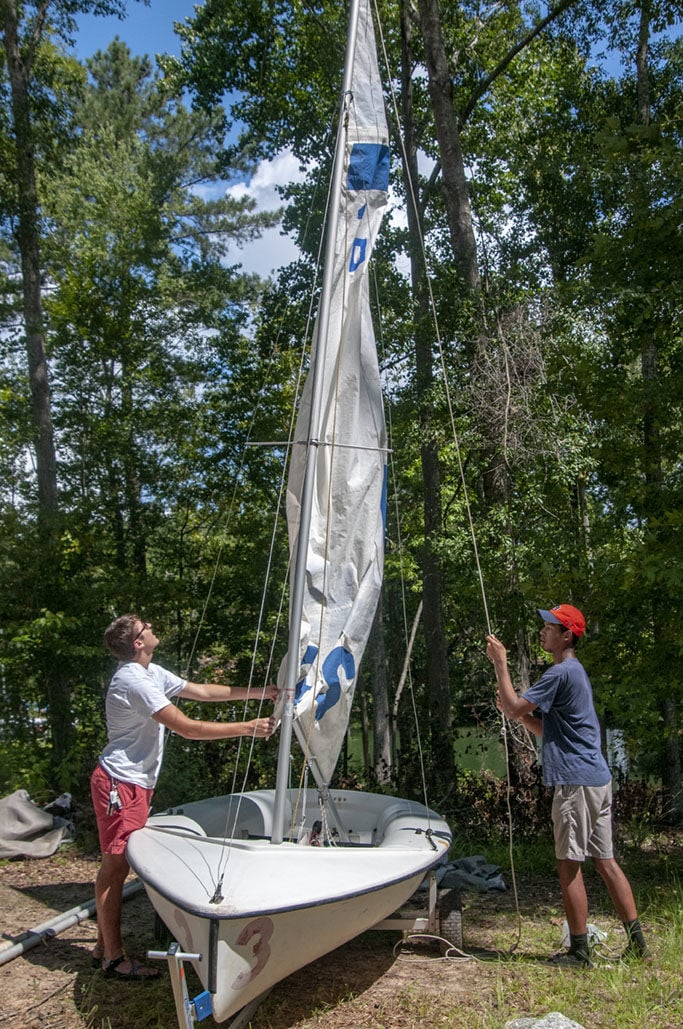 Lake Martin is the perfect practice for the AU sailing team. Photo by Amy Passaretti

Of all the possible lakes Auburn University’s Sailing Club could use for practice, its members are grateful to have Lake Martin and the Dixie Sailing Club as home to their boats and practice field.

The sailing team owns eight 420s; two 22s and a 27, which are all housed at DSC. The eight-year old Auburn University club had to start from scratch after the club was dismantled in the 90s due to lack of interest. Now, the club has more than 90 members, of which about 20 are active on the lake.

“The AU Sailing Club really defies the stereotype of some average college clubs. We actually enjoy getting out on the lake and spend as much time as possible there,” said Michael Zeller, race side fleet captain.

The choice of Lake Martin was easy, not only due to proximity, said Zeller, but also because of the quiet area where DSC is located, along with the abundant space to practice necessary runs and maneuvers.

“We do have a disadvantage from other colleges who live directly on the water, but Lake Martin gives us a good challenge on wind. We are able to gauge different types of wind a little easier,” Zeller said. ”But we do have a longer sailing season due to our weather.”

“This is some of the cleanest, clearest water I’ve seen in the world. If you sail, you can’t worry about falling in the water, so Lake Martin provides a good feature for that security,” said Carriço, who transferred to AU from Sydney University in Melbourne.

With more than 12 years of sailing and windsurfing experience off the coast of Australia in rough waters, Carriço brings a unique skill set to the club. He even volunteers his time and knowledge to the DSC youth program.

“I feel like it’s in AUSC’s best interest to express how helpful Kolbein has been this year by bringing his skills and sailing knowledge to our youth as a volunteer. He also serves on the DSCYP board of directors and is a great asset to our officers,” said Stephanie Childers, vice president of the DSC Youth Program.

The symbiotic relationship between AU and DSC is valuable to both parties. The university sailing club members offer assistance during DSC workdays and help with ground maintenance, when possible within their college schedules.

Carriço is vice commodore of the AU sailing team, which means he monitors the water, manages practices and oversees the day-to-day operations.

“The biggest job I have is to keep everyone in my eyesight. Safety is the top priority. Even though sailing is a pretty safe sport, it has the potential to be risky,” said Carriço.

Brett Lattimore, commodore of the fleet, runs what happens at the lake and is in charge of organizing all races and regattas. The team tries to attend four to five races in the fall season and about six in the spring.

It typically compete throughout the Southeast, as the club is part of the Southern Atlantic Intercollegiate Association of Sailing, but members have traveled as far north as North Carolina and as far south as Eckert, Florida.

“We have a very wide range of skill levels in our club. You don’t have to know how to sail to join. A lot of what our club does is having older members teaching the younger or newer members how to sail,” said Zeller.

Jeremiah Sain had never sailed before and visited Lake Martin early last month for his first round of instructions from Zeller and other members. The longer-standing members walked Sain through set up and rigging of the boat, along with launching and learning the ropes on the water.

“I really like to try new things, and I am excited for this opportunity. I love being outdoors and anything that involves being outside,” said Sain, a sophomore at AU.

Like Carriço, French exchange student Line Jouan is used to rougher waters off the coast of Hyeres where she is a sailing instructor. Jouan is attending AU for one semester and jumped at the opportunity to join the sailing team.

“I want to try every club because it is the best way to meet people since I am alone here and know no one,” Jouan said.

The Mediterranean Sea, which Jouan sails, is home to many World Cup competitions, and she said she enjoys the waters and softer winds of Lake Martin. Although Jouan has to learn the sailing terminology in English to react quickly on the boat, she said everyone has been extremely friendly upon her visit to the States.

“You have, by far, the most welcoming people here at Lake Martin. It’s amazing,” said Jouan. “And I have seen a lot of lakes, and there is nothing as pretty as here.”

For more information about the Auburn University Sailing Club, visit its Facebook page.